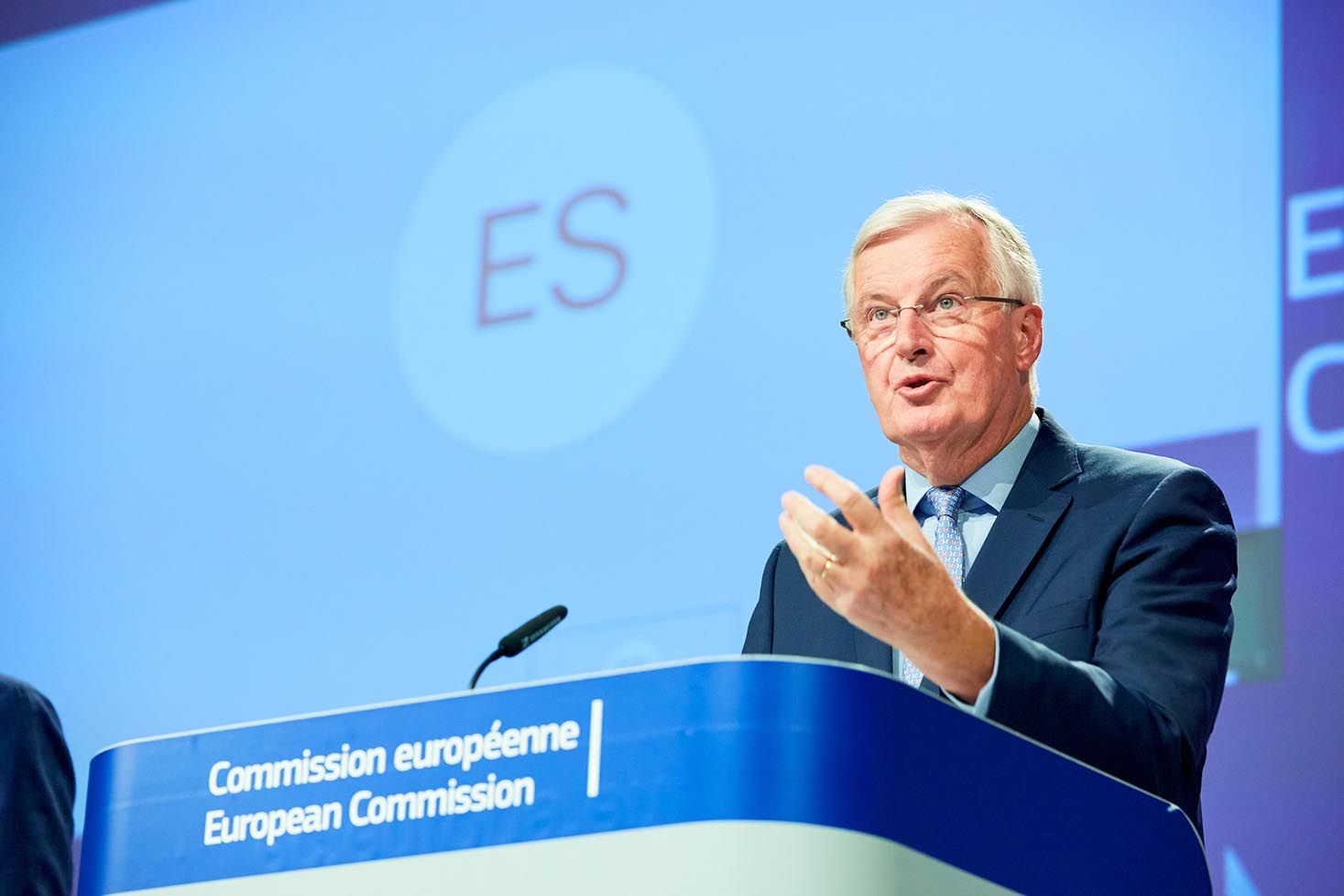 The British Pound gave back this week's gains after it was confirmed another round of trade negotiations have concluded with no substantive progress being made and negotiators on both sides displaying an increased frustration, confirming we will have to wait for an October meeting of EU leaders to deliver a final breakthrough.

The EU's chief negotiator Michel Barnier said "no progress whatsoever" had been made on fisheries and the two sides remain "far from agreeing" a deal on governance. The UK's David Frost meanwhile said the EU continue to block progress.

"We hear the British government's concern about maintaining its sovereignty and its regulatory autonomy and we respect that clearly. But no international agreement was ever reached without the parties agreeing to common rules," said Barnier following the conclusion of talks in Brussels. "At this stage an agreement seems unlikely. I simply do not understand why we're wasting valuable time."

Ahead of the the conclusion of talks we said negotiators would confirm no progress would be made, and they would seek to blame the other side for intransigence.

We also said the risk for Sterling was the tone coming out of Brussels would be particularly negative, and this does indeed appear to be the case with Barnier all but suggesting this deadlock is unlikely to be broken.

"Those who were hoping for negotiations to move swiftly forward this week will have been disappointed. I'm disappointed, concerned and surprised. Once again UK negotiators haven't shown any real willingness to move forward on issues of fundamental importance to the EU," said Barnier.

The Pound had been running higher ahead of the update thanks to some supportive UK economic data releases, however the all-important issue of Brexit has struck, taking the Pound-to-Euro exchange rate back down from a previous high at 1.1180 to 1.1142. 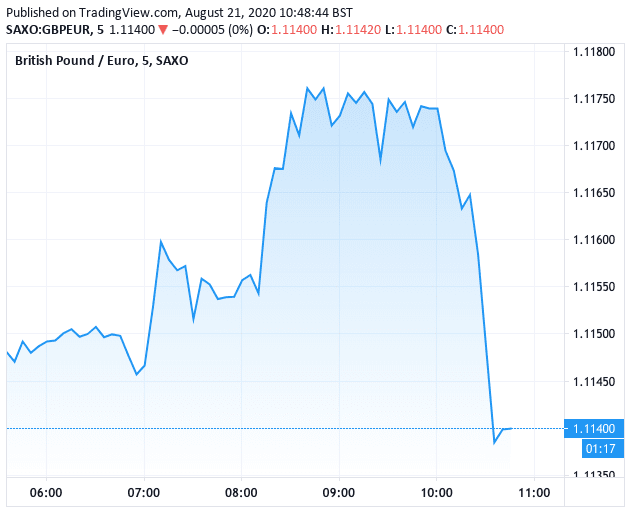 Above: Sterling rose on the back of strong economic data, but fell on a disappointing update from EU and UK trade negotiators

The Pound-to-Dollar exchange rate had earlier recorded a high of 1.3254 but has since reversed back to 1.3163.

The response from the UK side was equally scathing, with the UK's chief negotiator David Frost saying:

"The EU is still insisting not only that we must accept continuity with EU state aid and fisheries policy, but also that this must be agreed before any further substantive work can be done in any other area of the negotiation, including on legal texts. This makes it unnecessarily difficult to make progress. There are other significant areas which remain to be resolved and, even where there is a broad understanding between negotiators, there is a lot of detail to work through. Time is short for both sides."

Frost reiterated the UK are seeking a relationship which ensures we regain sovereign control of our own laws, borders, and waters, and centred upon a trading relationship based on an FTA like those the EU has concluded with a range of other international partners,

The deadlock is significant and to us it looks like some intervention is required at the political level as the two sides appear to have gone as far as their mandates allow them.

The news is a negative for Sterling as it suggests weeks of uncertainty lies ahead with more of the same negative headlines on a lack of progress likely.

Negotiators have scheduled meetings to run right up to October 02, but given the current deadlock it would appear these rounds might verge on the pointless.

The time for politicians is drawing closer.

"We believe it is too early for a significant breakthrough, as the deadline in early October (or end-December) is not close enough. Our base case is for a deal later in the autumn on a simple free trade agreement (65% chance) but we also see a significant risk of a no-deal Brexit," says Jakob Ekholdt Christensen, Chief Analyst at Danske Bank.

If you have Sterling based payments and would like to protect your budget, we would recommend booking today's rate for future use.

“We have just concluded the seventh round of negotiations with the EU. As I said last week, agreement is still possible, and it is still our goal, but it is clear that it will not be easy to achieve. Substantive work continues to be necessary across a range of different areas of potential UK-EU future cooperation if we are to deliver it.

“We have had useful discussions this week but there has been little progress.

“The EU is still insisting not only that we must accept continuity with EU state aid and fisheries policy, but also that this must be agreed before any further substantive work can be done in any other area of the negotiation, including on legal texts. This makes it unnecessarily difficult to make progress. There are other significant areas which remain to be resolved and, even where there is a broad understanding between negotiators, there is a lot of detail to work through. Time is short for both sides.

“We have been clear from the outset about the principles underlying the UK approach. We are seeking a relationship which ensures we regain sovereign control of our own laws, borders, and waters, and centred upon a trading relationship based on an FTA like those the EU has concluded with a range of other international partners, together with practical arrangements for cooperation in areas such as aviation, scientific programmes, and law enforcement. When the EU accepts this reality in all areas of the negotiation, it will be much easier to make progress.

“We will continue to work hard to reach an agreement. Chief Negotiators and their teams have agreed to remain in close contact over the next two weeks before the next Round in London in the week of 7 September.”

"The need for a Level Playing Field is not going to go away.

"Even if the UK continues to insist on a low-quality agreement on goods and services only.

"It is a non-negotiable pre-condition to grant access to our market of 450 million citizens, given the United Kingdom's geographic proximity and the intensity of our economic exchanges.

"We are asking for nothing more, but nothing less, than what Prime Minister Johnson committed to in our joint Political Declaration last October, together with the 27 EU leaders.

"Here is a small reminder of those commitments – which were also endorsed by the current UK Parliament, by the way, and supported by the European Parliament.

"In particular, paragraph 77, where we agreed that:

Our future agreement must encompass “robust commitments to prevent distortions of trade and unfair competitive advantages”;
And, I continue to quote: we should “uphold the common high standards applicable in the Union and the UK at the end of the transition period in these areas: state aid, competition, social and employment standards, environment, climate change, and relevant tax matters”.

"It's about finding agreement – between sovereign parties – on the rules that will govern future trade.

"As Commissioner Phil Hogan often says, a modern trade policy must contribute to upholding – or even raising – rights and standards, in the interest of citizens, consumers and sustainable development.

"We hear the British government's concerns about maintaining its sovereignty and its regulatory autonomy.

"And we respect that.

"But no international agreement was ever reached without the parties agreeing to common rules.

"And I can predict with absolute certainty: this will also be the case of trade agreements between the UK and other partners in the future, such as the United States, Japan or Australia.

"Apart from the question of a Level Playing Field, there are still many other areas where progress is needed. For example:

"Nonetheless, to be fully objective, I should add that, in some of the ten tables that convened this week, we were able to make progress on technical issues.

"For example, on energy cooperation, participation in Union programmes, and anti-money laundering, among others.

"This will be useful when it comes to consolidating, together, a final text – provided we are able to agree on fundamentals first.

"However, too often this week, it felt as if we were going backwards more than forwards.

"Given the short time left, what I said in London in July remains true:

"Today, at this stage, an agreement between the United Kingdom and the European Union seems unlikely.

"I simply do not understand why we are wasting valuable time."