The British Pound leapt 0.85% against the Euro and a host of other major currencies over the course of the past 24 hours, which makes for the largest daily gain since April 02 and potentially sets the UK currency up for further gains in what could prove to be a volatile week owing to another round of trade negotiations between the EU and UK.

The advance in Sterling came in sympathy with a rally in global equity prices amidst steadily improving investor sentiment regarding the global exit from lockdown and shifts in market positioning ahead of this week's crucial Brexit trade negotiations.

The UK and EU will on Tuesday begin a final scheduled round of trade negotiations and there remains little confidence that the two sides will make progress, ensuring "June could be a critical month for GBP," says Kamal Sharma, Strategist at BoFA Securities.

The Pound-to-Euro exchange rate has like other Sterling pairs fallen over the course of May with analysts suggesting the declines are a result of a renewed building up of anxieties over the state of EU-UK negotiations.

"The tone from both sides suggests to us that a deal is unlikely over the coming months as traditional long-standing fault lines likely continue to divide," says Sharma.

The declines have been facilitated by briefings from both EU and UK camps that unless the other side shifts on a number of substantive matters, an agreement might not be possible. This would set the two sides on course to default to WTO trading conditions at the beginning of 2021.

"Our bias into June is for a weaker pound and a test of the range lows," says Sharma. 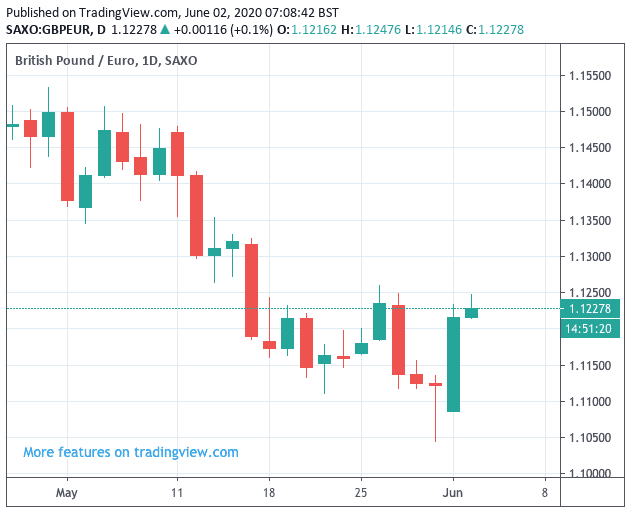 Above: The big moves in May were all lower, making Monday's green candle on the GBP/EUR daily chart stand out.

Yet, it is largely a given assumption that the EU and UK will fail to reach an agreement this week and the outcome could arguably be considered to be 'in the price' of Sterling. Therefore, this raises the risks that the Pound could rally on any unexpectedly good news concerning negotiations, for instance a suggestion that differences can be overcome in coming weeks or at a June 19 EU Council meeting to discuss the matter.

Whatever the case, the market's buying of Sterling suggests we are now in the correct ball-park in terms of valuation given existing expectations on negotiations.

"We remain cautiously optimistic that the two parties can reach an agreement before year-end, as we expect the negotiations will follow the same pattern as the withdrawal negotiations, where a deal was struck close to the deadline. This is only natural in political negotiations," says Jakob Ekholdt Christensen, Chief Analyst at Danske Bank.

The rally in GBP/EUR at the start of the week will come as little surprise to foreign exchange strategists at TD Securities who have made buying Sterling against the Euro in anticipation of a recovery their 'Trade of the Week'.

"We reckon that EUR has some steam to give up (we short EUR/GBP this week) ahead of the ECB meeting where a ramp up in PEPP is expected," says Mazen Issa, Senior FX Strategist at TD Securities.

Don't expect fireworks however, as TD Securities reckon "this week will be more about price discovery rather than a week of breakouts".

"We are going to test that theory with a EUR/GBP short," says Issa. A 'short' is trader-speak for selling an asset, in this case EUR/GBP; the inverse of this would be to be 'long' GBP/EUR.

With regards to the Brexit negotiation risks that lie ahead, Issa acknowledges "there will be some noise", but he says the Euro is currently looking stretched against the Pound.

Having risen for three weeks in a row, the Euro could be due to give back some ground to Sterling and the U.S. Dollar, if even on a technical basis.

Turning to the all-important question of the ECB, Issa says "there is some scope for EUR to lose some steam ahead of the ECB".

TD Securities are targeting a move lower in EUR/GBP to 0.87, which gives a GBP/EUR exchange rate target of ~1.15.

However, strategists at TD Securities' Canadian peer, RBC Capital Markets, have this week adopted the exact opposite stance on trading the Euro against the Pound.

The British Pound is due to undergo a meaningful degree of weakness against the Euro during the week commencing June 01 according to foreign exchange strategists at investment bank RBC Capital Markets, who have told clients their 'Trade of the Week' is a bet for Euro advances against Pound Sterling, on the view the final round of Brexit trade negotiations will result in disappointment and trigger fresh currency weakness.

"The latest negotiating round on the UK-EU future trade relationship runs through the course of this week and signals from both sides last week suggested little progress is being made in key areas," says Adam Cole, Chief Currency Strategist at RBC Capital. "The UK’s position remains that if significant progress has not been made by June, it will start planning for WTO-terms trade as the main scenario when the transition period ends in December. This disruptive scenario would be GBP-negative and no further negotiations are planned before the end-June deadline for requesting an extension to the transition period."

The other key event for the Pound-to-Euro exchange rate this week involves the European Central Bank (ECB) which updates markets with their latest policy decision on Thursday.

Economists expect further measures to support the Eurozone economy to be announced, however the bar to triggering a bout of appreciation in the Euro is arguably high given the scale of the measures already announced.

"We think there is a good chance the ECB increases the size of the PEPP envelope at this week’s meeting, but the impact of this on EUR would be small," says Cole.