The British Pound's stock market-inspired recovery faded in the mid-week session and opened up the prospect for a fall back to multi-week lows, with analysts saying any strength in the currency is likely to be short lived in nature owing to a host of fundamental headwinds.

The Pound had bounced higher from its lows at the start of the week as a correlation with global investor sentiment reasserted itself; rallying alongside the likes of the FTSE 100, German DAX and Wall Street as investors looked forward to the reopening of the global economy and news of promising vaccine trials.

A spike in 'risk on' assets - which includes pairs such as GBP/USD, GBP/EUR and GBP/JPY - occured after it was reported a trial by Moderna had generated anti-bodies to the covid-19 virus in humans. "Sterling bulls have hitched a ride on broad Dollar weakness as virus-related lockdowns ease, optimism grows over the Franco-German proposal to add to prodigious global government aid and apparent progress in the search medical solutions to COVID-19," says Paul Spirgel, a Reuters market analyst.

However, doubts have since been cast on the data coming out of the Moderna trial which has put something of a dampener on sentiment, which has in turn seen Sterling's 'risk on' rally stall:

The Pound-to-Euro exchange rate had recovered from sub-1.11 to now tread water at 1.12, while the Pound-to-Dollar has recovered from sub-1.21 levels seen at the start of the week to rest just above 1.22. "Sterling frequently serves as a wingman to broader risk sentiment and stock movements. Global equities in decline weighed on the Pound," says Joe Manimbo, a foreign exchange analyst with Western Union.

Vaccine experts have questioned Moderna's vaccine trial results, telling the medical publication Stat News that the company has yet to release significant data to support its claim that its drug successfully produced antibodies in human trials.

"While Moderna blitzed the media, it revealed very little information - and most of what it did disclose were words, not data. That’s important: If you ask scientists to read a journal article, they will scour data tables, not corporate statements. With science, numbers speak much louder than words," said Helen Branswell, of Stat News.

"Once again we have seen the initial rally around a potential virus treatment breakthrough fail to maintain momentum given ongoing questions over how long any treatment will take to make a tangible difference to the battle against COVID-19. While Trump promises to open the economy with or without a vaccine, there is no doubt that a second wave could deal huge damage to both the economy and stock markets globally," says Joshua Mahony, Senior Market Analyst at IG.

We expect the Pound to remain reactive to the fortunes of global stock markets as the currency has shown it tends to fall against the Euro, Dollar, Yen and Franc when markets are in bearish mode. Any turn lower, or higher, in broader sentiment will therefore likely be reflected in Sterling's fortunes. "The Covid-19 crisis has been another hammer blow for Sterling as it promoted a flight-to-safety and ramped-up the search for liquidity. This situation is a win for the U.S. dollar and, in turn, a loss for the pound," says Nigel Green, chief executive at deVere Group, the financial advisory firm.

"U.S. markets are expected to continue outperforming as we move forward, with the Fed and government both looking willing to provide huge support packages to ensure markets and businesses remain strengthened. Mnuchin’s claim that the government is willing to suffer losses when bailing out companies does highlight Trump’s desire to ensure the US emerges from this crisis as strong as possible. From the UK perspective, the emphasis has been heavily focused on ensuring individuals do not suffer, hence the huge differential between US and UK unemployment rates," says Mahony.

While broader market sentiment is important for the Pound, we have however seen investors start to place more emphasis over other considerations of late, including Brexit and Bank of England policy, and we remain of the view that this trio of factors will dictate Sterling direction over coming days, weeks and even months.

Unfortunately for Sterling bulls, the outlook is decidedly negative when Brexit trade negotiations and Bank of England policy are considered. "Uncertainty about the Brexit transition period is coming more and more to the fore. The UK government is focussed on solving the COVID-19 crisis. Meanwhile it is refusing to consider extending the Brexit transition period, which expires at the end of 2020," says Georgette Boele, Senior FX Strategist at ABN Amro.

The Pound is this month’s worst-performing major currency and could "easily drop to $1.18" at the end of June, according to deVere's Green. "There are legitimate concerns that the Pound has further to fall in the next few weeks."

A key concern for investors is the stalling of trade negotiations between the UK and the EU, with both sides confirming last Friday they were at an impasse and there is a great distance to bridge in a final round of negotiations, scheduled to commence in early June.

Sterling dropped sharply in reaction to the developments, and is likely to remain on the backfoot amidst ongoing uncertainty over whether a trade deal will ultimately be agreed.

The UK's chief Brexit negotiator David Frost gave a robust assessment of the EU's demands on Tuesday when he said the EU is only offering a "low-quality" trade deal and not "a fair free trade relationship".

"Overall, we find it hard to see what makes the UK, uniquely among your trading partners, so unworthy of being offered the kind of well-precedented arrangements commonplace in modern FTAs," said Frost. 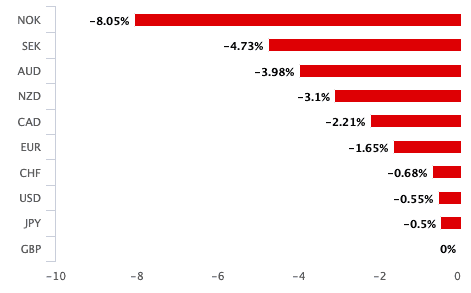 Above: GBP performance over the past month

"The Pound will remain volatile, and is likely to become weaker in the next month. As such, it can be expected that domestic and international investors in UK assets will be seeking the available international options available to them," says Green. "A low pound is, of course, bad news for British expats, amongst others, who receive income or pensions in Sterling."

The UK and EU have until June 30 to agree to a new extension to the transition period, if required. However, the UK are steadfast in a view that no extension will be required, which could in turn place pressure on Brussels to give ground.

"The UK continues to refuse to follow EU standards and rules on certain topics, which the EU thinks is necessary for reaching an agreement. We continue to think that the negotiations will get worse before they get better (including that we do not expect an extension of the current transition period ending by the end of this year), which is the main reason why we are still looking for more GBP weakness in coming months. The next round of negotiations begins early June," says Mikael Olai Milhøj, Senior Analyst at Danske Bank.

These are nevertheless high-stake trade negotiations and markets know they will only yield results at the last minute. Nevertheless, the uncertainty - when combined with a softer global market environment - is likely to limit Sterling's upside potential and encourage potential weakness.

"This year Sterling has had the tendency to weaken versus dollar and euro when investor sentiment deteriorates (which we expect). Taking all of these factors together, we expect Sterling to weaken," adds Boele.