An ongoing rebound in global equity markets has allowed the British Pound to stage a recovery against the Euro, U.S. Dollar and other major currencies, but analysts from investment banks such as Goldman Sachs, CBA and TD Securities are sceptical the recovery will last.

The Pound is catching the coat-tails of a rally in equity markets as investors react to a decrease in global infection and death rates due to covid-19, news of a promising vaccine and a commitment made by the U.S. Federal Reserve Chairman Jerome Powell at the weekend that the Fed stands ready to offer more support for the economy where needed.

Since the onset of the coronacrisis the Pound has tended to display the attributes of a 'risk on' currency, i.e. a currency that falls when markets fall and rise when markets recover. That relationship had waned somewhat as stock markets traded sideways for much of May, allowing factors such as Bank of England policy and Brexit trade negotiations to play more of a role and a pressure the Pound lower.

However, a renewed recovery rally in stocks appears to have made its presence felt in Sterling markets: the Pound-to-Euro exchange rate recovered to 1.1240 before news about a unified European approach to funding the coronavirus sparked a recovery right across the Euro exchange rate complex ensuring a large portion of the gains were pared back.

But it is against the safe-haven currencies such as the Yen, Franc and Dollar where Sterling is recording the lion's share of its advances, with the headline Pound-to-Dollar exchange rate recovering to 1.2240, having been as low as 1.2083 when the week began. 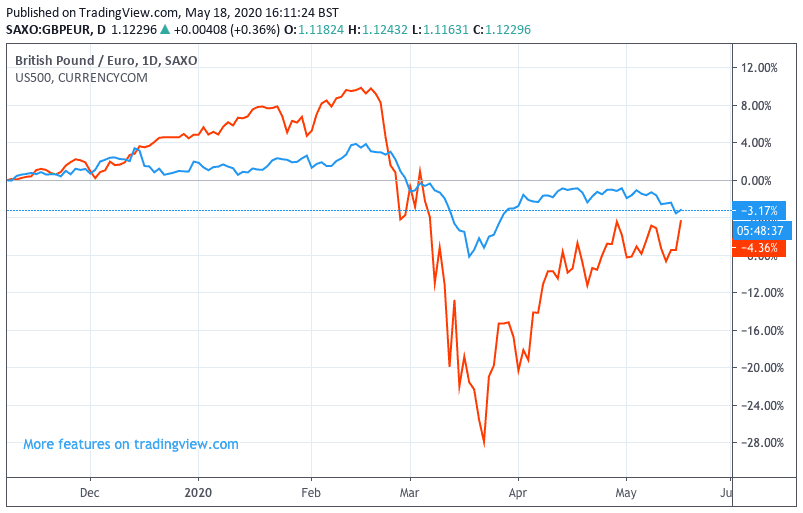 Triggering the rally in stocks was a commitment by the Federal Reserve's Jerome Powell to offer more support to the financial system and economy if needed.

"Powell’s comments about doing more if needed to support the U.S. economy have provided the fuel for yet another rally in equity markets, with the Dow adding 700 points in its first hour of trading. This is just the thing to re-energise the bounce in stock markets, which has been looking rather tired of late. Q1 data such as GDP and earnings is now mostly done and dusted, but things are expected to get worse. And just as central banks moved quickly earlier in the year to support economies as the crisis worsened, so they are beginning to make the kind of noises that suggest even more support is coming," says Chris Beauchamp, Chief Market Analyst at IG.

News that pharmaceutical company Moderna's covid-19 vaccine was showing positive results ensured the rally accelerated, allowing Sterling to maintain a positive bias against safe-haven currencies such as the Dollar, Yen and Swiss Franc. Moderna's coronavirus vaccine is the first to be tested on humans and results suggest it is safe will it succeeded in generating antibodies which stopped the virus replicating.

According to early trial results shared on Monday, eight healthy volunteers saw few adverse effects after taking two doses of the potential vaccine, while it appeared to trigger an immune response by producing "neutralising antibodies" in all patients.

At the time of writing European markets are rallying by over a percent as the improved sentiment amongst investors runs into another day, ensuring further advances by the Pound.

"Sterling bounced off 7-week lows by 1.2075 ..., rallying to session highs above 1.2202 as improved risk sentiment on lockdown relaxation and upbeat expectations for a COVID-19 vaccine or cure, triggered a dollar-negative reduction of safe-haven positions. The Pound is seeing buying ahead of 1.2000," says Paul Spirgel, a Reuters market analyst.

But there are a number of other factors to account for when considering Sterling's outlook, and on this front analysts are sceptical.

"The pound still faces significant uncertainty about EU-UK trade negotiations and a possible no-deal Brexit at the current Dec. 31, 2020 deadline. The UK has also been one of the hardest hit economies by COVID-19, with the market speculating that the BoE may eventually consider negative rates in to jumpstart the economy," says Spirgel.

The Pound painted fresh multi-week lows in early Monday trade after investors considered comments from Bank of England Chief Economist and Monetary Policy Committee Member Andy Haldane who on the weekend said implementing negative interest rates at the Bank of England over coming months was not off the table.

The prospect of negative interest rates in the UK will deprive Sterling of a significant source of support: the inflow of foreign capital to take advantage of the returns offered by UK government gilts. By slashing interest rates into negative capital could even flow out of the country, adding downside pressure on the Pound.

"GBP has managed a tepid recovery despite dovish BoE comments. This suggests positioning looks a bit short, but we think any further squeeze should remain limited. Brexit risks are back while the UK economy remains in a perilous state," says Ned Rumpeltin, European Head of FX Strategy at TD Securities. 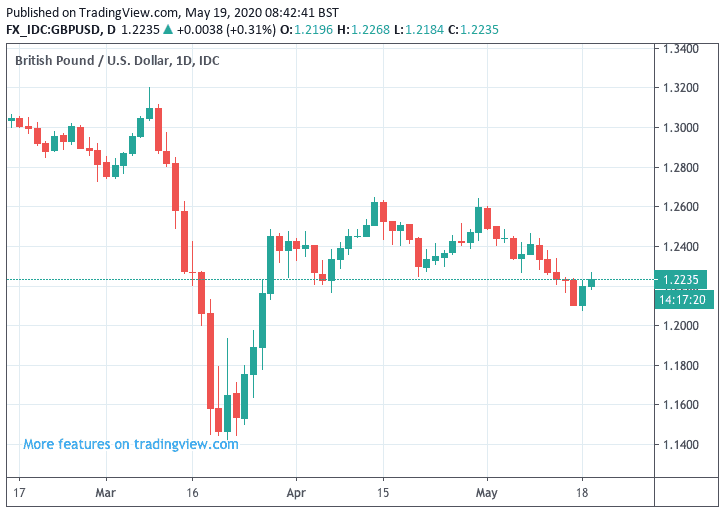 The above daily GBP/USD puts the recent gains into context: Sterling strength is yet to convince.

Foreign exchange strategists at Goldman Sachs meanwhile look for Brexit to keep Sterling under pressure over the near-future.

"Brexit’s back, all right," says Zach Pandl, co-head of global foreign exchange and emerging market strategy at Goldman Sachs in New York. "UK and EU negotiators are once again at an impasse over the future trading relationship, and neither side appears willing to give much ground at this stage."

Goldman Sachs economists do not expect the UK to request an extension to the Transition Period, which under current legislation would need to happen by July 1.

"Given this familiar combination of an approaching deadline and intransigent positions, and the relative calm in markets allowing investors to take a slightly longer view, we expect Brexit concerns will continue to weigh on Sterling in the weeks ahead," says Pandl.

Elias Haddad, FX Strategist at CBA says the British Pound can edge lower versus U.S. Dollar and Euro this week because the likelihood of no UK‑EU trade deal has increased and the possibility of negative Bank of England policy rates can no longer be ruled out.

Disagreement remains on regulatory alignment and access by UK financial services firms to the EU.

The final round of talks is scheduled for the week of 1 June 2020, and markets will likely retain a cautious approach on Sterling ahead of the outcome of these key discussions.