The Pound shed value against the Dollar, Euro and the 'risk off' currencies such as the Yen and Swiss Franc.

We note that global stock markets are trading with a softer tone on Friday, suggesting there could be an element of soft investor sentiment impacting on Sterling.

Market participants remain focussed on the economic toll of the coronavirus pandemic, with a lack of certainty as to how far the collapse will extend proving to be a key factor in remaining defensive.

"The dour data is coming thick and fast this week, with a slew of record low services PMI readings throughout Europe being led by a shocking reading of 17.4 in Italy. That Italian represents the fastest decline in services seen in history, with the draconian lockdown seen in a bid to curb the spread of the virus largely shutting down the industry," says Joshua Mahony, Senior Market Analyst at IG.

Despite the daily falls, the Pound does remain relatively well supported from a short-term perspective, thanks to a strong recovery run that has been in place since mid-March. Having suffered sharp falls in excess of 10% against the Euro, Dollar, Yen and Swiss franc by the halfway point of March, the UK currency eventually bottomed on March 19 and has since staged a solid recovery.

The big turnaround for the Pound appears to have come when the U.S. Federal Reserve stepped forward and announced it would be pumping billions of dollars of liquidity into the global economy on March 19. 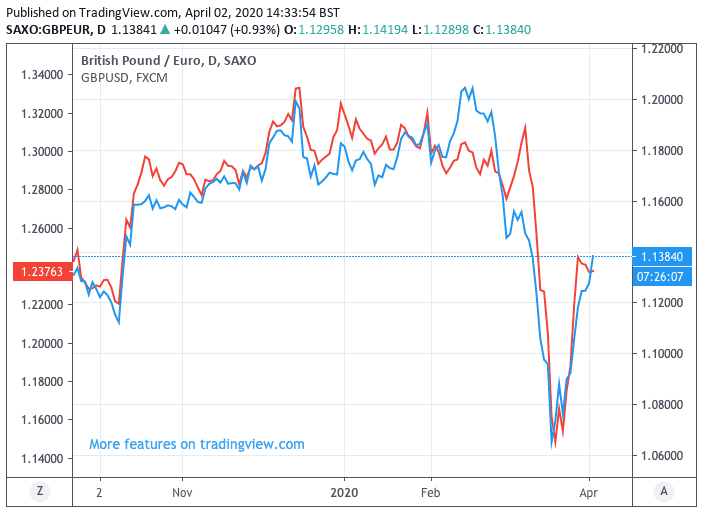 Above: Sterling has advanced against both the Dollar and Euro since March 19.

The coronavirus-inspired market meltdown had created a surge in demand for cash as traders exited bets and corporations saw they would need to tighten belts ahead of a looming global recession, which in turn saw them placing a sizeable premium on cash.

Because the UK has such a significant financial services sector the country effectively experienced a mega cash withdrawal, which naturally hammered Sterling.

"We continue to see upside potential for sterling. Despite its relative liquidity, the pound was one of the G10 currencies most harshly punished by the dollar funding squeeze, possibly due to the UK’s large financial sector. As this issue seems to have been resolved, we expect sterling to regain its lost ground by mid-year. The Bank of England today decided to leave the measures it announced in previous weeks unchanged, which was interpreted positively by sterling investors," says Gaétan Peroux, Strategist at UBS.

The Fed's actions to supply liquidity ultimately let steam out of a the pressure cooker that was the world's finance system, and the UK was naturally a beneficiary of this easing pressure owing to its function as the de-facto global capital of finance. "Sterling was the currency hit hardest by lack of liquidity and concern about access to dollars in early March, falling by around 10% in value. But it’s also been seen the strongest bounce as the fed has rolled out measures to tackle the issue," says Kit Juckes, Head of FX Strategy at Société Générale.

"As far as the Federal Reserve is concerned, if a foreign bank in a foreign country lends money to a foreign company, that's not its concern, even if the transaction was in dollars. It's role is not to be the central bank for the world, or for “Dollar-land”. But while that position was just about tenable in the past, it isn't now. The dollar's share of global financial markets isn't shrinking, even though the US's share of the global economy is," adds Juckes.

The Pound's recovery found further impetus on Tuesday when the Fed announced it would further ease pressures by announcing it would temporarily allow other central banks to exchange their holdings of US Treasury securities for overnight dollar loans.

As long as the Fed is able to provide liquidity we would expect Sterling's trend higher to extend.

Above: The Pound is one of the top performing majors of the past week.

The advances in Sterling does of course have the fading fortunes of other currencies to thank, in particular the Euro.

The Pound-to-Euro exchange rate has retaken the 1.14 handle over the course of the past 24 hours thanks to a combination of Sterling strength and waning demand for euros owing to the chronic inability of Eurozone countries to unite around a joined-up fiscal response to the economic ravages wrought by the coronavirus crisis.

A joined-up fiscal response is believed to be the most effective response to a dramtic slump in Eurozone economic activity, leading many European nations including France and Italy, to promote the idea of creating a 'coronabond' in order to secure fresh funding that would flow to the region's weakest and hardest-hit economies.

A coronabond would however mean the pooling of risk by all Eurozone states, leading some Northern European states, most notably Germany, Netherlands and Austria, to resist the idea on the fear that they will ultimately fund the programme.

"We all know that the strength of a relationship can be severely tested during times of crisis. This is currently very obvious in the EU, and the euro is not taking it well. There is no agreement about how to support the member countries most badly affected by the virus," says Thu Lan Nguyen, FX Strategist with Commerzbank in Frankfurt.

EU leaders are however still committed to finding a unified fiscal solution to the crisis and we believe any progress that is judged to be credible by the markets could spark a recovery in the Euro.

"In Europe, leaders are discussing ways to support the worst hit European countries, like Italy and Spain, ahead of the Eurogroup meeting. Proposals range from common debt issuances like Corona bonds to setting up an EU coronavirus support fund. Watch out for signals from European leaders, notably the German and French side," says Jens Peter Sørensen, Chief Analyst at Danske Bank.

The Pound-Dollar exchange rate has meanwhile remained remarkably stable given the increasing strength in the broader U.S. Dollar we have seen since the new month started, which in itself is testament to the improved standing of Sterling.

A deteriorating global economic outlook linked to ongoing lockdowns to prevent the spread of the coronavirus is seen as one factor that is likely to keep the Dollar in demand.

"The surge in US initial jobless claims to 6.6m yesterday suggests he US will soon enter a deep recession if it isn’t already in recession. The deterioration in the US, and global, economy will support USD," says Kim Mundy, Currency Strategist at Commonwealth Bank of Australia.

New U.S. welfare claims rose at a record rate last week, according to Department of Labor figures, which puts the world's largest economy on course for a double-digit unemployment rate and huge falls in GDP up ahead.

6.64mn Americans made new applications for welfare payments during the week to last Friday, up from the previous upwardly-revised record of 3.28mn during the prior week and with many state authorities having cited the coronavirus and impact of efforts to contain as being behind the increase.

The data aided further gains in the Dollar, which is in fact now the best-performing major currency of the past month: 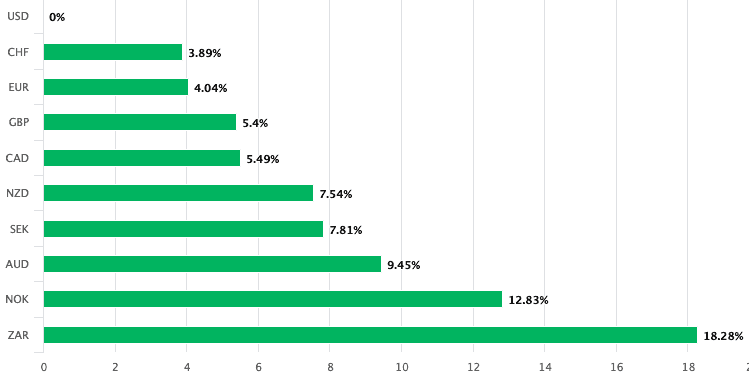 Above: USD performance for the past month

"The USD is a countercyclical currency, it lifts when the global outlook deteriorates," says Mundy.

The outlook for the global financial markets and the world economy remains negative with deaths from coronavirus continuing to mount with little sign that the unprecedented lock-downs in Western economies is about to end.

We feel that for now the most significant 'game changer' would be news of a successful vaccine trial, or some other form of medical solution that significantly brings down death rates. This could well turn the Dollar lower.

By all accounts such an outcome is however still some way off and therefore the Dollar has scope to gain further, but beware the element of surprise.