- Sterling outlook softer as a result

- But some economists say fears are overdone

- Potential rebound in Sterling in store if Bank fails to cut 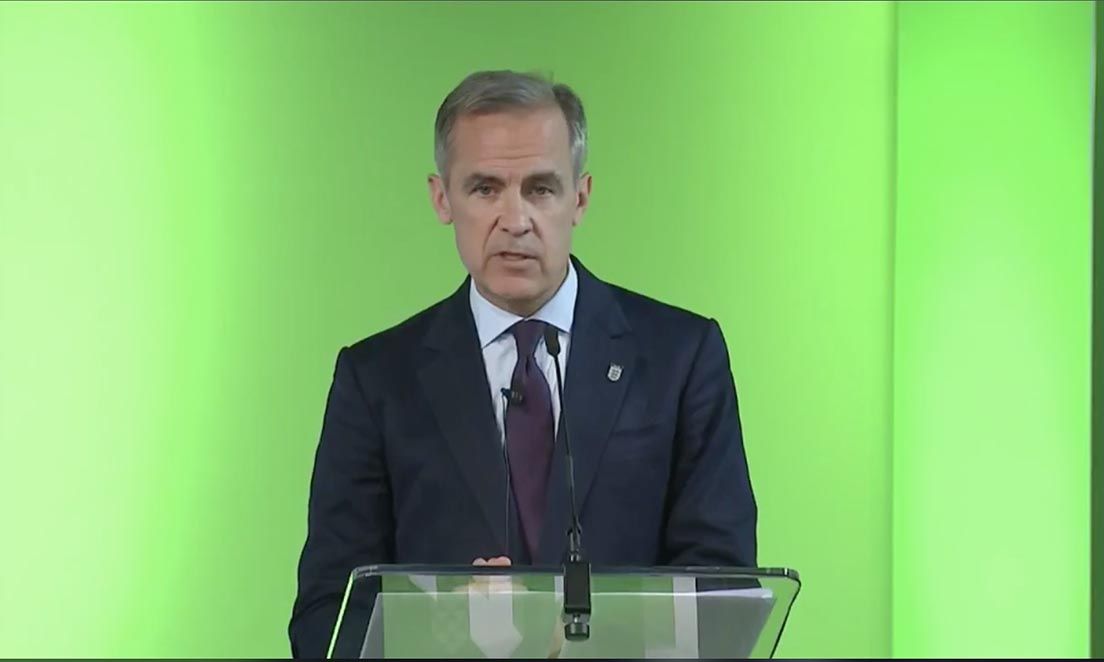 The British Pound is being tipped to remain under pressure over the near-term as foreign exchange markets sell the currency in anticipation of a January 30 interest rate cut at the Bank of England, but some analysts are warning a rate cut is not yet a done deal, which if correct, makes the Pound a potential buy candidate around current levels.

The Pound has fallen 1.0% against the Euro and 0.5% against the U.S. Dollar rover the course of the past week as market expectations for an interest rate cut have ramped up from just 5% last week to over 60% at the time of writing.

Rate cut expectations pushed higher on Wednesday after UK inflation for December came in at 1.3% according to ONS data, which is well below the 2.0% target the Bank of England is mandated to target. Monetary policy theory suggests that cutting interest rates fuels economic activity, which in turn boosts inflation.

"Subdued UK inflation reinforces our view the BoE will cut the Bank Rate by 25bps to 0.50% on 30 January and GBP/USD will likely depreciate to its 200‑day moving average at 1.2691," says Elias Haddad, a foreign exchange strategist with CBA.

"Sterling remained on its back foot after the weakest U.K. inflation in years raised the stakes for an imminent rate cut by the Bank of England. The cost of living slowed to a 1.3% pace in December, the weakest in three years. A growing number of BOE officials have warned about a possible rate cut if the Britain’s economy continued to splutter," says Joe Manimbo, a foreign exchange analyst with Western Union.

This week's inflation data had a particularly outsized impact on Sterling largely because it comes at a time when Bank of England Monetary Policy Committee Members have been lining up to butter up markets for a potential rate cut.

Governor Mark Carney and Silvana Tenreyro both spoke last week, suggesting an interest rate cut in the current low-growth, low-inflation environment would not be amiss. This message was subsequently backed up over the weekend by Gertjan Vlieghe who said he needed to see a material pick up in economic activity evidenced in the end-January PMIs to convince him against voting for a rate cut. 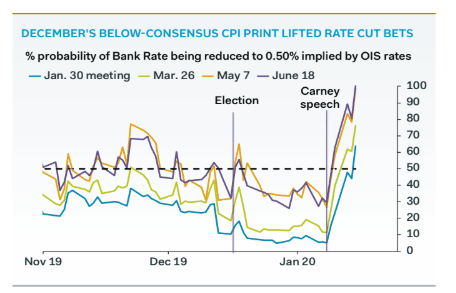 Above: Rising expectations for an interest rate cut have been evident since last week. Image courtesy of Pantheon Macroeconomics.

Adding impetus to the message was Michael Saunders who on Wednesday said "it probably will be appropriate to maintain an expansionary monetary policy stance and possibly to cut rates further, in order to reduce risks of a sustained undershoot of the 2% inflation target."

But Beware the Upside Surprise

The current narrative is one of Sterling weakness based on a Bank of England interest rate cut being delivered at the end of January, but what if the Bank fails to cut rates? For Sterling such an outcome would now be a surprise owing to expectations for a cut rising to over 60%, and therefore the Pound would likely move higher sharply and undo the weakness seen in the currency in the past week.

"There are two reasons why we think investors may now have gone too far," says Andrew Wishart, UK Economist, at Capital Economics, referring to the rapid increase in expectations for a rate cut:

"First, the MPC’s communications were probably a reaction to the market mispricing the chance of a rate cut previously, rather than a sure-fire sign a cut is coming," says Wishart. "All eyes now turn to the release of the PMI data, starting at the end of nextAs we now know, the slim chance of a cut in January priced into the market was inconsistent with the MPC’s view that one might be needed. To maintain credibility in the event the Committee decides a cut is appropriate, the Bank needed to prepare the ground," says Wishart, adding:

"Second, data relating to after December’s general election will be more important to the MPC’s decision than the data relating to November and December. At the margin, the GDP and inflation figures make a rate cut a bit more likely. And with activity stagnating, inflation below target and the labour market easing, in normal times the MPC would have already cut interest rates. It hasn’t because it suspected that the general election might lead to a reduction in Brexit uncertainty that allows demand to recover.

Capital Economics have a good record of predicting Bank of England policy shifts of late: they were ahead of the competition in recognising the strong possibility of a near-term rate cut, which is now materialising. They were also the only forecaster to predict a split vote at the November MPC meeting.

"The survey data relating to the period after the election will be crucial in deciding which way the decision goes," says Wishart.

Data out over the next two weeks will be key for Sterling as we the first concrete signal as to whether the UK economy is undergoing a post-election boost in activity.

"The results of the 'flash' PMI survey on January 24th are now probably the key data point between now and the MPC meeting on January 30th. If they show a strengthening of activity, it should be sufficient to stay the MPC’s hand. If they don't then it does raise the possibility that the committee could follow up its recent rhetoric with a policy move later this month," says Cathal Kennedy, European Economist at RBC Europe Limited.

Bank of England Monetary Policy Committee member Gertjan Vlieghe said over the weekend it would take a solid improvement in the data to convince him against cutting interest rates, and strong data here would almost certainly tip the Bank's MPC into voting to keep rates unchanged.

But with the bar to a rate cut looking as high as it is, it will take a sizeable improvement to shift the dial at the Bank.

Nevertheless, some analysts remain of the opinion that the data will offer enough to convince the Bank to sit on its hands.

"We continue to expect the MPC to keep its powder dry this year," says Samuel Tombs, UK Economist at Pantheon Macroeconomics, who has previously been ranked by Bloomberg and Reuters as the UK's top inflation forecaster.

Tombs says all the early evidence suggests that corporate confidence has surged since the election. CFOs reported their biggest-ever increase in optimism, according to Deloitte's quarterly survey, which has an 11-year history; the Q4 survey was conducted between December 13 and January 6.

"On past form, the optimism balance points to a huge rise in the Markit/CIPS composite PMI in January, released on January 24," says Tombs.

The Institute of Directors has meanwhile found that at the end of December firms were their most confident about the 12-month outlook for the economy since their survey began in January 2018.

"Firms were confident enough to increase new permanent staff members for the first time in a year, according to the REC Report on Jobs survey, conducted either side of the general election," adds Tombs.

Paul Hollingsworth, Senior European & Chief UK Economist at BNP Paribas says easing expectations are overdone, and that the Bank will have to face up to an improvement in the UK data pulse.

"Whilst backward-looking data for November and December are likely to be weak, given that they largely reflects old circumstances, early signals from the post- election period have been more positive," says Hollingsworth. "We would not overlook the fact that the dovish comments from the MPC came in quick succession, as there may be some signal in this. However, we see the market reaction as disproportionate."