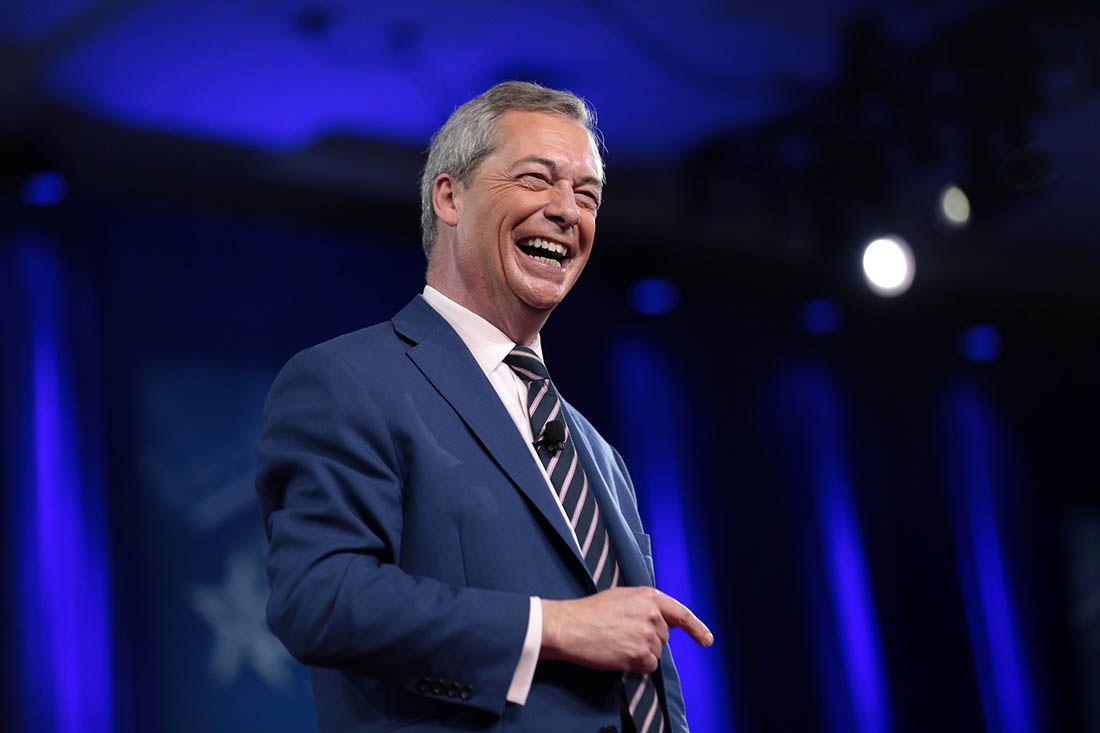 Pound Sterling hit fresh July highs against the Euro and took another stab above the 1.25 level against the Dollar as a short-term recovery extended, on a day that saw numerous devlopments in UK politics.

Boris Johnson took over from Theresa May as Prime Minister and it appears markets will be wanting fresh information as to Johnson's intended Brexit policy before pushing an already heavily-discounted currency any lower.

Indeed, a number of analysts are telling us the current recovery in Sterling is actually technical in nature, without any real substantive underpinning, we therefore wonder just how high the recovery can actually go.

"The Pound, which refused to fall on the announcement of Boris Johnson becoming the new UK Prime Minister, was higher across the board at the time of writing. Clearly, short-side profit taking was supporting the beleaguered currency after sharp falls in the previous months," says Fawad Razaqzada, a Technical Analyst at Forex.com.

The Pound has external drivers to thank for its recovery too: it shot higher against the Euro mid-morning Wednesday on news of a severe slowdown in German and Eurozone manufacturing with the release of PMI data for July.

"Sterling is bouncing nicely this morning and this appears to be EURGBP sell-driven more than anything else following today’s weak flash PMI data out of Germany and the Eurozone," says Erik Bregar, Head of FX Strategy at Exchange Bank of Canada.

"We think this is simply a short covering bounce in an otherwise pronounced downtrend," adds Bregar. "UK politics will feature some pomp and circumstance today as Theresa May resigns to the Queen and Boris Johnson is formally asked by her majesty to form a new government. Next up for GBP traders will be Boris Johnson’s new cabinet minister selections."

A concerted jump in Sterling was picked at 11:40 Wednesday when newswires reported that the Portuguese Foreign Minister said Portugal will listen carefully to Britain's new government under Prime Minister Boris Johnson, and the priority is to avoid a 'no deal' Brexi.

"We will listen carefully to what the new British government has to say," Foreign Minister Augusto Santos Silva said on Wednesday told journalists. "But our objective is to avoid a disorderly exit (of Britain from the European Union.)"

There certainly has been some indication that the European Union are willing to talk to the new PM, these comments only add to this view and suggests a negotiated Brexit remains a distinct prospect.

Earlier, talk of an electoral pact between the Brexit Party and Conservative Party proved to be a significant development, simply on the basis that it reduces the prospect of a Leftist Corbyn-lead government dramatically. 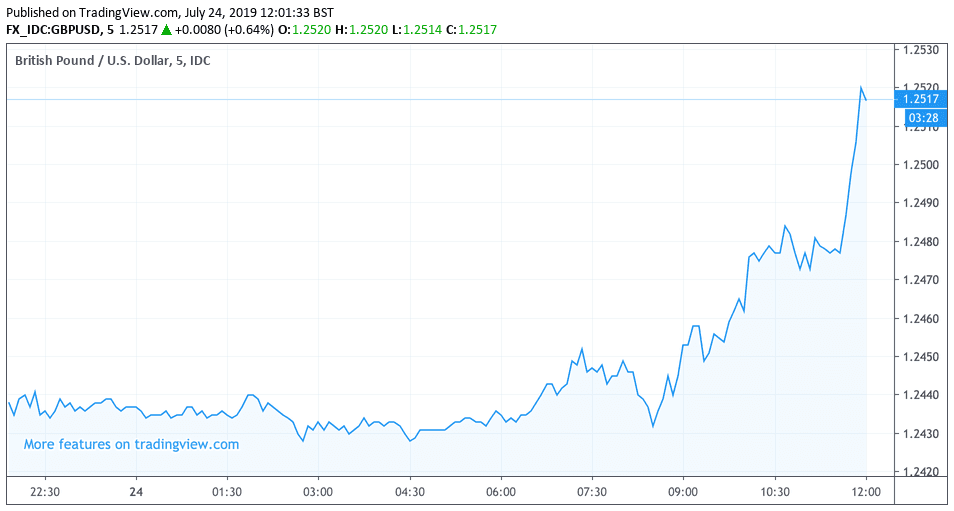 Brexit is not the only single concern for markets: a General Election that results in an anti-business government is held by many to be equally as bad, if not worse.

Bexit Party leader Nigel Farage said he is open to an electoral pact with the Conservative Party if Boris Johnson is genuine about taking Britain out of the European Union on October 31.

"There is a possibility that an electoral pact could be forged but ... we would need to believe them, and at the moment that is not very easy," Farage is reported by the BBC to have said.

There is a four-horse race underway in the polls with Labour, Conservatives, Liberal Democrats and the Brexit Party all polling around the 20% mark.

However, a YouGov poll conducted following Johnson’s election as Conservative leader put the Conservatives on 25 points, the Liberal Democrats on 23 points, Labour on 19 and the Brexit Party on 17.

This suggests the Brexit Party is losing votes to a Conservative Party that is more 'hawkish' on Brexit.

Nevertheless, if the Brexit Party were to target Labour heartlands, sensing that they will be incensed by their party's failure to deliver Brexit, then there is a good chance that the Conservatives and Brexit Party establish a decent majority between them in a snap General Election under current conditions.

The news comes as foreign exchange strategists are starting to see some value in Sterling at current levels, and are anticipating a rally higher as a result.

Value in Sterling at these Levels

The suggestion that Sterling offers value comes as the Pound-to-Euro exchange rate suffers 11 weeks of successive losses, confirming it to be in a determined down-trend.

Indeed, we wrote in our week-ahead forecast that if purse technical analysis were to be considered any short-term strength in Sterling would likely be short-lived as ultimately the trend remains down.

The multi-week declines were triggered when markets realised Prime Minister May's Brexit deal would not pass through parliament and her position as leader had therefore become untenable.

This triggered a bout of uncertainty as markets considered the next Prime Minister might be more determined to pursue a 'Brexit at all costs' strategy.

Indeed, Johnson's "pledge to leave the EU with or without a deal as scheduled on 31 October partly explains the pound’s near 5% fall over the last three months, making it the worst-performing G10 currency over that period," says Haefele.

UBS analysts estimate that the market is now pricing a near 50% chance of a 'no deal' Brexit.

This week it was reported that senior European Union sources estimated the chance to now be greater than 50%.

Yet, Sterling has managed to recover some lost ground over recent days, particularly against the Euro.

There is also a growing sense that the rhetoric of the campaign trail will have to be toned down as the incoming Prime Minister has to grapple with the realities before him.

"The British Pound has been driven almost exclusively by emotions in recent weeks. Even if political uncertainty persists, we expect the currency to appreciate slightly during the summer recess. At some point, Boris Johnson has no choice but to compromise," says Marc-André Fongern with MAF Global Forex.

Johnson has promised to strike a new deal with the EU, and suggests the prospect of a 'no deal' is small.

Yesterday we heard the EU's chief Brexit negotiator Michel Barnier say his team is ready to engage with Johnson on working towards a negotiated exit, a development which we thought was the most likely trigger behind the rise in the Pound-to-Euro exchange rate.

"While it is difficult to forecast the ultimate outcome of Brexit — and we won't attempt to do so — the market may now be overstating the short-term risks of a 'no deal' departure," says UBS' Haefele.

The analyst suggests that while Johnson is willing to pursue a 'no deal' Brexit, he faces several barriers, including the uncomfortable fact that the government will likely have an effective working majority of one or two by the time the week is out.

The exact size of the majority is in fact quite difficult to determine, it depends on who you ask. We do know that a parliamentary by-election in Wales due to be held Thursday will in all likelihood see the Conservatives replaced by the Liberal Democrats.

Johnson simply cannot risk alienating any wing of his parliamentary party as Labour leader Jeremy Corbyn has promised to call a no-confidence vote in the government as soon as they sense they have the numbers. Corbyn knows he needs just a handful of disaffected Conservative MPs to come aboard.

"The Conservative Party lacks a majority in Parliament, the party itself is not united, and suspending Parliament would face strong resistance. So although a no-deal Brexit remains possible, we believe the UK is more likely to ask for a further extension to exit day, whether due to a change in stance from Mr. Johnson, or due to a no-confidence vote followed by a general election," says Haefele.

Haefele suggests there is a chance Sterling now stabilises:

"While he has campaigned on a promise to leave the EU with or without a deal on 31 October, Mr. Johnson may take a more conciliatory approach in office. His early comments will be closely watched by investors, particularly foreign-exchange traders, who have pushed Sterling to the lowest level in two years," says Haefele.

The British Pound is meanwhile said by one analyst to already be trading at crisis levels, and as a result could struggle to fall much lower.

GBP is already "trading at crisis levels, and will struggle to go much lower," says Jordan Rochester, foreign exchange strategist with Nomura in London.

That the Pound is already low by historical standards, it would suggest it will take successive bouts of bad news to really push new lows.

Nomura's Rochester also makes the point that the change at the top of the UK's leadership extends well beyond the Prime Minister's office:

"Over the next few weeks and months, the leadership transition will not only include a new Prime Minister, but a complete changing of the guard. In addition to a new PM, the UK can also look forward to seeing replacements for Chancellor, Cabinet, Bank of England Governor, budget and Brexit plan.

Despite the expected leadership changes, Rochester notes implied volatility levels in Sterling are still below levels seen back in March when markets were showing notable nerves over the prospect of potential big moves around the original Brexit date, and therefore "a lot of the negative news has been priced into spot," says Rochester.

In short, the Pound is at levels that suggests it has eaten a decent share of bad news.

"GBP already trades at crisis levels and typically struggles to move much lower," says Rochester. 'While we acknowledge that a no-deal Brexit is a risk and would very likely record new lows in GBP, we do not expect the market to assign a higher hard Brexit premium than previously or until parliament returns after the summer break in September."

Above: GBP/EUR since 2009: Sterling is at already-low levels, and it might struggle to fall lower

We believe the conditions for a recovery in Sterling over coming weeks, that coincides with Parliament's summer break, is a distinct likelihood.

After all, this is a political currency, and with no politicians to bother it the prospect of a recovery grows.