- GBP/EUR finds support near the bottom its of recent range.

- But downtrend remains intact amid mixed signals from charts.

The Pound-to-Euro rate is set to begin trading around 1.1143 at the beginning of the new week after retreading a familiar range throughout the previous one, although studies of the charts suggest the pair is at an inflection point from which it could break in either direction.

Charts suggest the Pound-to-Euro rate is at a crossroads and that it could either go either sideways, lower or higher in the coming days, although we favour a move to the downside because of the recent downtrend remains intact.

The 4 hour chart, which we use to determine the short-term outlook including the next 5 days, shows the pair having bounced higher after finding support at the 17 July lows. The big question of course is whether this rebound is the start of a reversal higher or just a temporary correction within the broader downtrend. 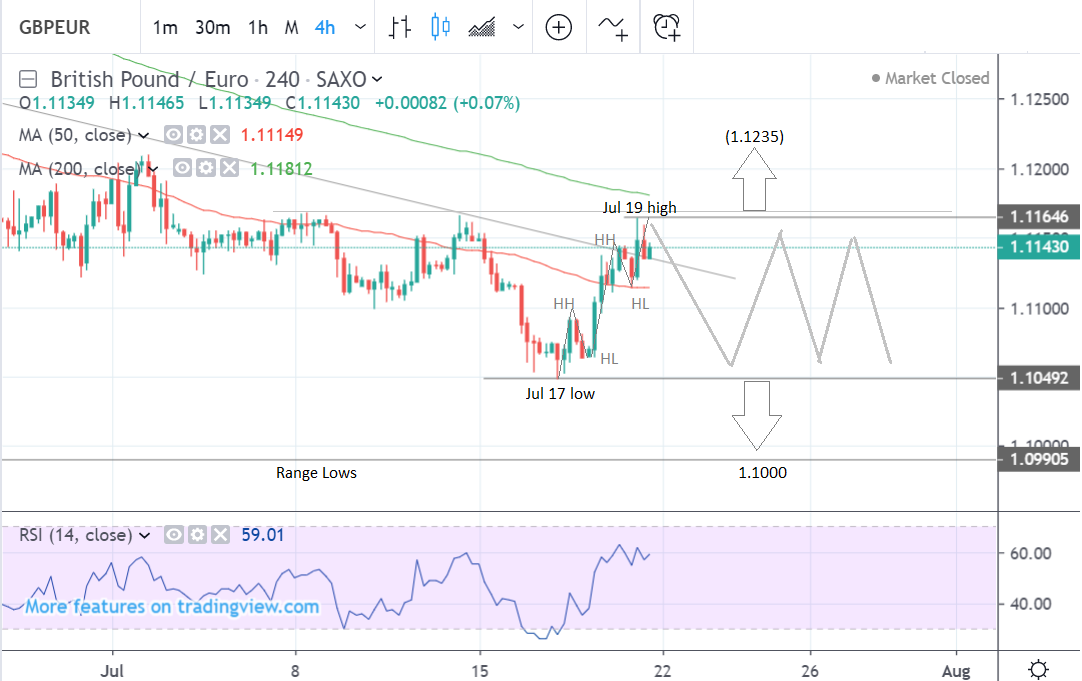 At the moment it is too early to say for sure whether last week's move is simply a correction within a broader downtrend, or is a reversal of the trend. While the rebound has two sets of higher-highs and higher lows, which are positive signs, there is no other compelling evidence to support the idea of a reversal.

A break above the July 19 highs and the 1.1170 level would confirm a reversal to the upside and suggest a target of around 1.1235.

However, because the bear trend is still intact we favour a move back down toward the range lows around 1.1000, although this leaves traders with little scope - less than half a cent - for profit. 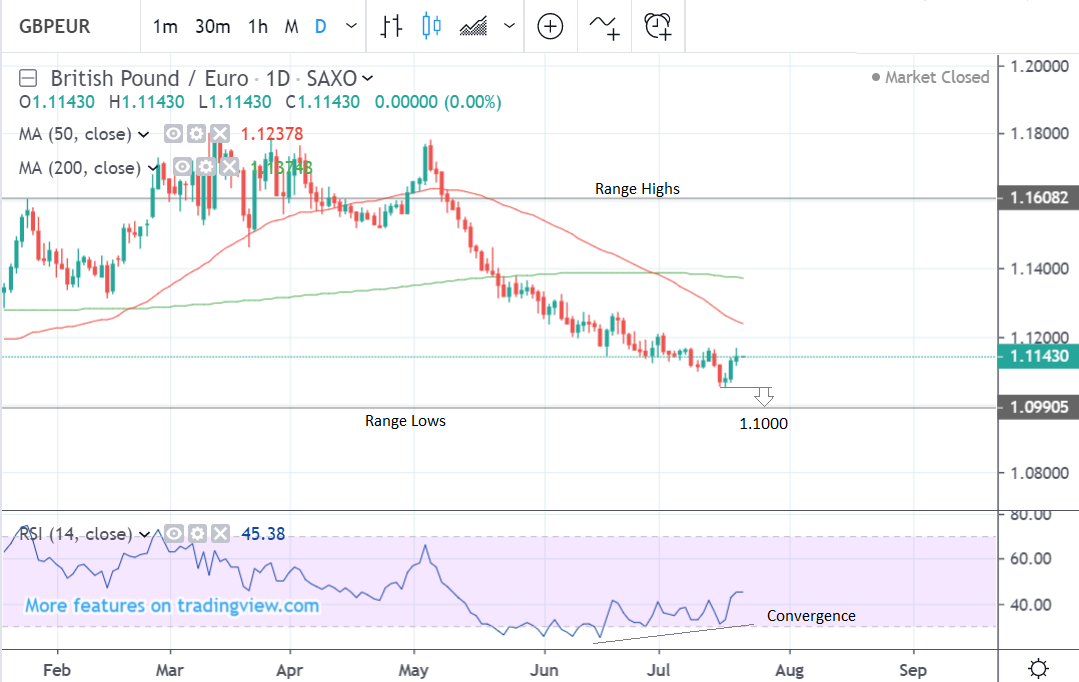 The daily chart, which we use to analyse the medium-term outlook including the next month, shows the pair in a nice and steady downtrend that looks set to continue. A break below the July 17 lows at 1.1048 would confirm a continuation down to 1.1000.

The pair is also showing bullish signs such as the fact that it has risen on 3 consecutive days, which is sometimes a characteristic of reversals. However, on its own, this is not enough to give confidence to a bullish call.

The relative-strength-index (RSI) momentum indicator in the lower panel is converging bullishly with price, which means price is making new lows but the RSI is not following suit, but the effect of this convergence has already been observed to some extent in the 3-day bounce mentioned above. 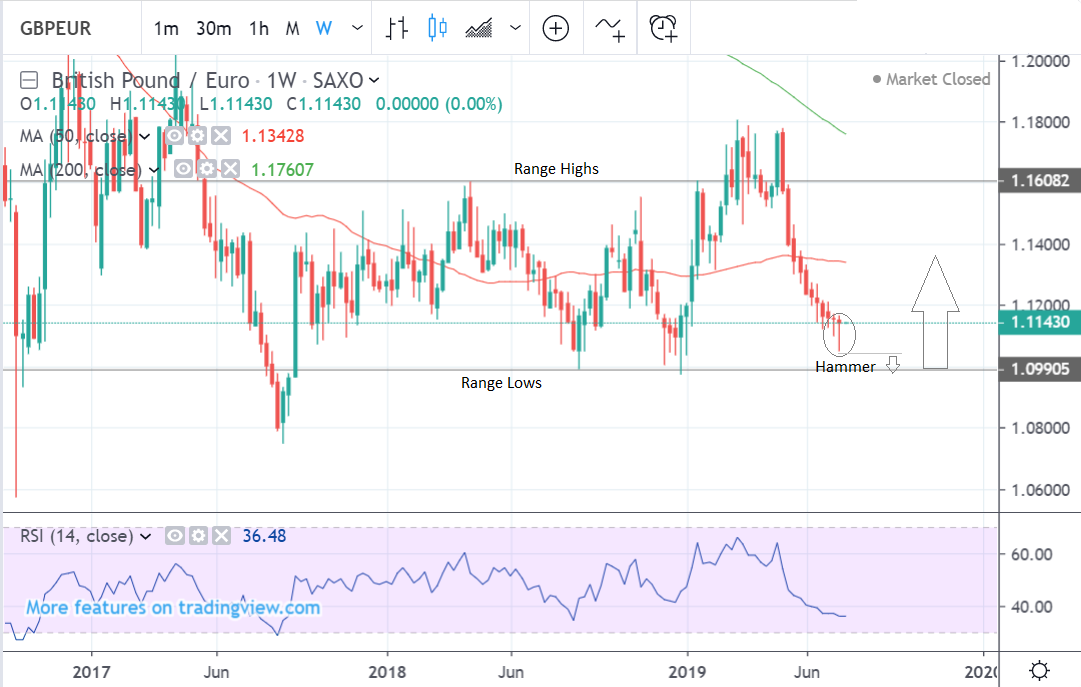 The weekly chart shows the pair completing its 11th week of declines. The analysis remains the same as the previous week’s.

The overall trend is down but the pair has formed a very compelling bullish hammer candlestick at the lows which could be signaling a bottom is in place. The hammer is longer than usual, although it is red and would have been a stronger signal if it had been green (an up-day).

The RSI momentum indicator (circled) is also looking increasingly like it may be rounding out a bottom, with the possibility of a gentle climb occurring over the forecast horizon, mirroring a similar recovery in price.

Therefore, there is a growing risk of a rebound even though it may only be a temporary one as the market finds a new equilibrium level and as traders close out bearish-bets ahead of the key range lows.

In any case, a move down to 1.1000 would probably lead to a bounce back up within the established range, likely towards the 1.1600 highs. The weekly chart is used to analyse the long-term trend which is defined as the next several months of market action.

The major driver of the Pound this week is likely to be the announcement of the winner of the Conservative Party leadership election on July 22, but with little difference remaining between the two candidates' stated Brexit policies, the result may not cause as much volatility as previously expected.

Jeremy Hunt is seen as more ‘moderate’ and less likely to take the UK out of the EU without a deal, so his election might provide some relief for Sterling. The opposite is true of Boris Johnson, who is the bookmakers' favourite to win, although such an outcome is likely in the price of the Pound by now.

According to betting website oddschecker, Johnson's chances of winning have increased to 97.08%. On the data front the major release is the CBI Industrial Trends survey, which on Tuesday and a speech from Bank of England’s (BOE) chief economist Andy Haldane on the same day.

Andy Haldane is set to make a speech at 13.15 on Tuesday. The market will be keen to hear his views on the economy after recent mixed data. Previously the BOE had been one of the few major central banks not expected to cut interest rates, and was actually talking about raising them. Much depends on Brexit of course. Will Haldane continue to endorse a marginally hawkish stance, or is he going to turn more neutral? On Tuesday we shall see. If he changes his tune it could weigh on Sterling.

The CBI survey is usually closely followed because it provides timely insight into changing industrial trends. Industrial production unexpectedly plunged -2.7% in June and although it rebounded 1.4% in July it was a worrying result, and the worst since 2013. Investors will therefore be keen to see what the CBI data reveals when it is released on Tuesday at 11.00 BST and whether the sector is likely to see more declines in the future or not.

The Euro has quite a busy week ahead, with the European Central Bank (ECB) interest rate decision on Thursday the most important event. But preliminary readings for the July PMIs out on Wednesday and the ECB’s bank lending survey on Tuesday are also important.

June inflation came out marginally better-than-expected at 1.3%, and 1.1% for core, but markets are now pricing in more-than a 50% chance the ECB will cut its interest rate on Thursday. This could still weigh on the Euro throughout the week because the cut is not yet fully priced-in.

In other words, a rate cut from the ECB this week could lend more support to the Pound-to-Euro rate in the days ahead. Consensus is for the July manufacturing PMI to sit unchanged at 47.6 and for the services PMI to slip from53.6 to 53.3 when the data is released on Wednesday at 9.00 BST.

“The Eurozone’s composite PMI – seen as a strong indicator of GDP growth – has been inching higher in recent months on the back of an improving services sector. However, the manufacturing PMI has been stuck in negative territory, weighed by increased trade and Brexit uncertainty. There are concerns that the manufacturing weakness could soon spill over into the broader economy,” says Raffi Boyadijian, an analyst at XM.com.

Finally, the ECB bank lending survey out on Tuesday at 9.00 may be another focus of interest for investors since an uptick in lending will be key to any continental economic recovery. If the survey shows a fall it will be another sign that growth is under threat, and a red flag for the ECB.