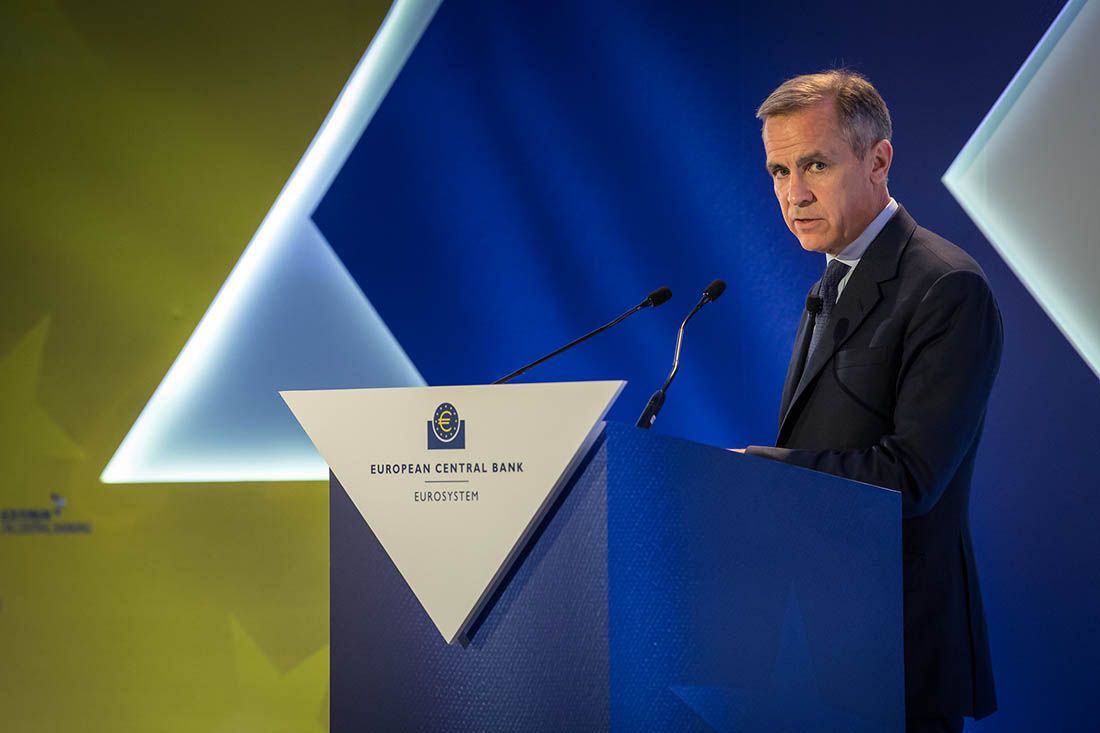 - ECB and Fed work against Euro, Dollar with dovish messages

Pound Sterling dipped on news the Bank of England's Monetary Policy Committee has voted 9-0 to keep interest rates unchanged, ensuring the UK currency is trading well off the recent highs it struck against the Euro, Dollar and other major currencies ahead of the Bank's June policy event.

The UK currency's negative reaction reflects 1) the unanimous nature of the decision, some were holding out for a potential 8-1 split and, 2) the downgraded assessment for the economy made by the Bank which have triggered growing expectations for the next move on rates to be a cut.

Economic growth is expected to remain below its potential with the Bank's Nowcast suggesting 0% growth in the second quarter; but the Bank does believe it will pick up in the event of a Brexit deal being secured.

However, the Bank also communicated that the odds of a 'no deal' Brexit occurring have increased since May's meeting, while global risk factors appear to be of increasing concern.

"Since the Committee’s previous meeting, the near-term data have been broadly in line with the May Report, but downside risks to growth have increased. Globally, trade tensions have intensified. Domestically, the perceived likelihood of a no-deal Brexit has risen. Trade concerns have contributed to volatility in global equity prices and corporate bond spreads, as well as falls in industrial metals prices. Forward interest rates in major economies have fallen materially further. Increased Brexit uncertainties have put additional downward pressure on UK forward interest rates and led to a decline in the sterling exchange rate," reads a statement from the Bank.

The communication has seen the Pound-to-Euro exchange rate dip sharply: at the time of writing we are quoting the spot market at 1.1239, the day's high is up at 1.1270. 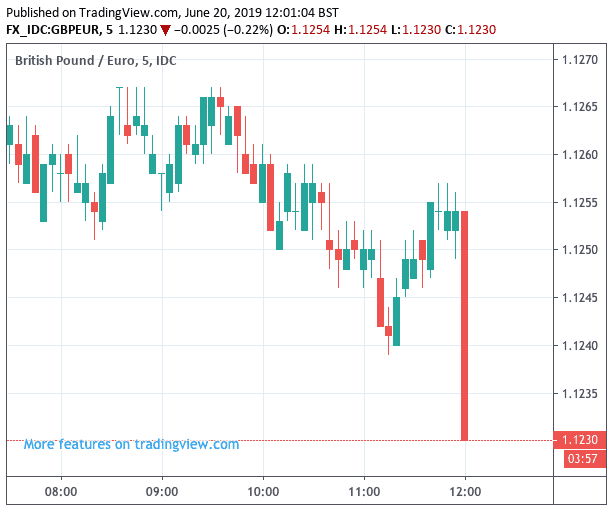 "The MPC walked a careful, neutral line in June, leaving GBP without a strong directional cue," says James Rossiter, Senior Global Strategist with TD Securities in London, who says the declines in the currency following the decision actually representing a near-term positioning realignment. "In the immediate run up to the release, GBP had registered notable gains against its two primary rivals, USD (+1.8%) and EUR (+1.2%) this week," notes Rossiter.

Currency market focus has this week been aimed squarely at central banks with both the European Central Bank and U.S. Federal Reserve giving strong indications that they are ready to 'ease' policy levers to assist their respective economies.

The ECB on Tuesday indicated that they were considering an interest rate cut and/or a boost to their quantitative easing programme, while on Wednesday night Fed Chairman Jerome Powell indicated up to two interest rate cuts could be delivered by the Fed before 2019 is out.

The actions by the Fed and ECB have both pushed back against Euro and Dollar strength, allowing the under-pressure Pound to consolidate.

It was with this dynamic in mind that we approached the Bank of England meeting with the view that were they to keep settings unchanged it would certainly become the most 'hawkish' central bank of the three, simply by virtue of doing nothing.

Only once the day's trade is closed will we be able to make an assessment as to whether this call was correct.

We do however note that expectations for an interest rate cut in the next six months have risen, with market expectations set at around 25%, having been closer to 10% ahead of the meeting.

The BoE's relatively sombre assessment on the outlook comes amidst slowing manufacturing activity and rising Brexit uncertainties. Monthly GDP data showed the UK economy actually shrank in April amidst a slowdown in the manufacturing sector.

However, real wage growth excluding bonuses increased 3.4% in the latest set of data, while unemployment remains at historical bottom.

This supports the Bank of England's message that it will likely raise interest rates at a gradual pace over a long period of time.

Markets believe the prospect of an interest rate rise in 2019 is slim, particularly as the Bank will be wary of the October 31 Brexit deadline.

"Sterling dips off below $1.27 as gilts go bid, with the next event for the pound returning back to politics. Who will be Boris' contender?" says Simon Harvey, an analyst with Monex Europe.

Politics: Leadership Contest Down to the Final Two

The race to replace Prime Minister Theresa May should generate some interest as today sees the field whittled down to the final two contenders.

At 13:00 B.S.T. it was announced that Sajid Javid had been eliminated, leaving favourite Boris Johnson likely facing either Jeremy Hunt or Michael Gove in the membership vote.

"The certainty with which markets now price in Johnson winning (87% on Betfair) makes the second candidate a bit of a sideshow for GBP and the greater uncertainty is what Johnson actually stands for, which seems to become less clear as time goes on," says Adam Cole, a foreign exchange strategist with RBC Capital Markets.

With Johnson expected to win, what matters for currency markets going forward is the amount of light he chooses to shed on his plans for Brexit: the front-runner has been notably coy on letting any details of his proposed strategy known.

The stark reality facing Johnson will be laid bare by the Chancellor of the Exchequer Philip Hammond in a speech to be delivered at the Mansion House tonight.

Hammond is expected to warn that any candidate planning to use no deal as their plan B will be risking a general election. It will be "an immutable truth" that parliament has rejected the current deal, as well as no deal, and that the EU will not countenance renegotiation, he will say.

“We cannot allow ourselves to be forced to choose between our democracy and our prosperity. If the new prime minister cannot end the deadlock in parliament, then he will have to explore other democratic mechanisms to break the impasse. Because if he fails, his job will be on the line – and so, too, will the jobs and prosperity of millions of our fellow citizens,” Hammond will say.