Pound Sterling was seen staging a recovery against the Euro and U.S. Dollar in mid-morning trade on Tuesday, June 11 after UK labour market data showed wages continue to rise.

According to ONS data, average earnings, with bonuses included, grew 3.1% in April, which was faster than the 2.9% growth markets were expecting.

The average earnings rate, without bonuses included, grew 3.4% in April, taking the year-on-year growth rate to 3.8%, its highest growth rate since 2008.

With inflation standing at 2.1%, UK consumers find themselves in a position where pay is easily outstripping price increases.

"Sterling jumps above $1.27 and the only G10 currency in green against the U.S. Dollar after April's nominal wage growth increases a whopping 3.8%, the fastest one-month increase since May 2008 (excluding bonuses)," says Simon Harvey, FX analyst at Monex Europe.

The beat on expectations saw the Pound catch a bid as markets reckoned the data keeps alive the prospect of a Bank of England interest rate rise being delivered before 2019 is out. 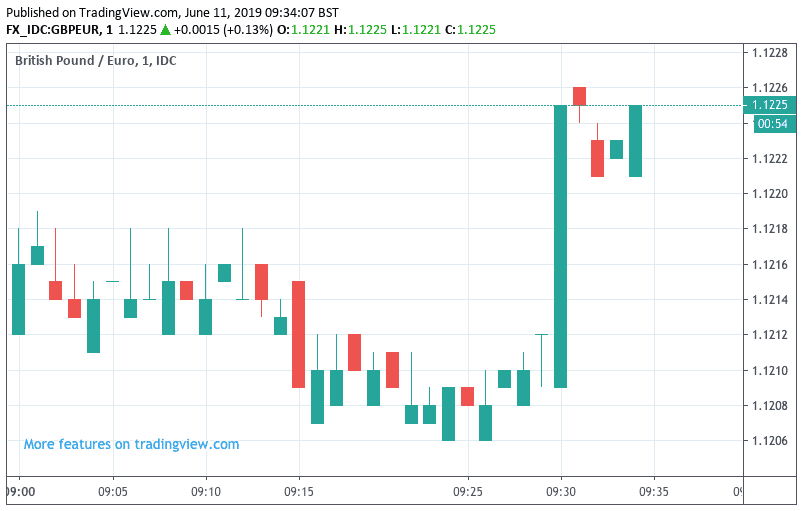 Above: Sterling goes higher against the Euro following the release of UK labour market data.

"The British labour market remains rather resilient and provides little cause for concern, as the unemployment rate continues to be unchanged at a very low level. Given that average earnings have improved steadily, we expect a slightly optimistic BoE in the near future," says Marc-André Fongern, Head of FX Research at MAF Global Forex.

The Pound-to-Euro exchange rate is quoted at 1.1223 in the wake of the numbers, having been as low as 1.1193 earlier in the day. The Pound-to-Dollar exchange rate is quoted at 1.2709 having been as low as 1.2669. The data will come as a relief to the UK currency which remains has been caught in a relentless downtrend since early May, and we would expect any strength to be short-lived in nature as markets remain primarily focussed on UK political dynamics.

"Cutting through the political noise that dominates the column inches currently, sterling received a boost from another decent wage inflation release this morning. As I have suggested before, it was lagging earnings data which stayed the hands of the MPC previously when CPI was testing above 3%. Since this has flipped, and with headline inflation still remaining around target levels, it could be the wage data that tip’s the BoE towards a rate hike sooner than people realise," says John Goldie, FX Dealer at Argentex, a foreign exchange brokerage.

The employment data suggests the Bank of England could raise interest rates sooner than financial markets expect. The data comes in the wake of BoE policymaker Michael Saunders comments made on Monday that the Bank would not necessarily wait until all Brexit uncertainties were resolved before raising interest rates again.

At a time when the U.S. Federal Reserve and European Central Bank are looking at potentially cutting interest rates, this stance should provide a supportive dynamic for Sterling against the Dollar and Euro.

Financial market pricing of future interest rates appear to betray an assumption that the BoE is more likely to cut rates than to raise them over the coming year, reflecting signs that trade conflict between the United States and China is hurting the world economy.

However, some analysts point out that the UK is not as exposed to international trade dynamics as the U.S. and Eurozone, and therefore the reasons for the Fed and ECB cutting interest rates do not necessarily translate into a 'sympathy' cut at the BoE.

If markets row back on their expectations for a BoE rate cut and align them once more with the view that a 2019 rate rise is likely, then we could well see Sterling find further support.

"This is a strong labour market report that bolsters the case of MPC members Andy Haldane and Michael Saunders who recently have re-emphasised the need for gradual increases in interest rates," says Samuel Tombs, Chief U.K. Economist at Pantheon Macroeconomics. "With the labour market unlikely to weaken suddenly soon and government policies set to remain supportive of faster wage growth, the MPC can’t afford to ignore the constant inflation pressure now emitted by the labour market."

Text-book central banking rules state that interest rates must rise in order to keep inflation at a sustainable level, and one of the main drivers of inflation is wage growth.

A typical side effect of interest rate rises is a stronger currency as global investors channcel capital to where returns are expected to be higher.

Commenting on the future of UK interest rates in a speech hosted by the Institute of Directors at Southampton's Solent University, the BoE's Saunders said, "we probably would have to return to something like a neutral stance earlier than markets project... I want to stress that the MPC does not necessarily have to keep rates on hold until all Brexit uncertainties are resolved."

Indeed, the BoE has raised rates twice since Britain voted to leave the EU, in November 2017 and August 2018.

Andy Haldane, the BoE's chief economist, meanwhile said in an opinion piece in Saturday's edition of the Sun newspaper that the time was nearing "when a small rise in rates would be prudent to nip any inflationary risks in the bud".

Other analysts are more circumspect on the latest set of labour data, suggesting that wage growth will moderate over coming months and this could ease back on expectations for an interest rate rise.

"The pick-up in core earnings seems driven by temporary drivers, such as a one-off public sector pay band increase and a pick-up in whole economy hours worked rather than actual hourly earnings growth. We believe the pace of earnings growth is likely to slow and stabilise over the coming months," says Fabrice Montagné, an analyst with Barclays.

"Recruitment agents continue to signal that permanent job placements declined steadily between March and May, implying risks to employment ahead (Figure 4). Meanwhile, vacancy growth in May slowed further, and the hiring of temporary workers continued to outpace that of permanent staff, providing further evidence that job creation remains temporary given the uncertain backdrop," says Montagné.