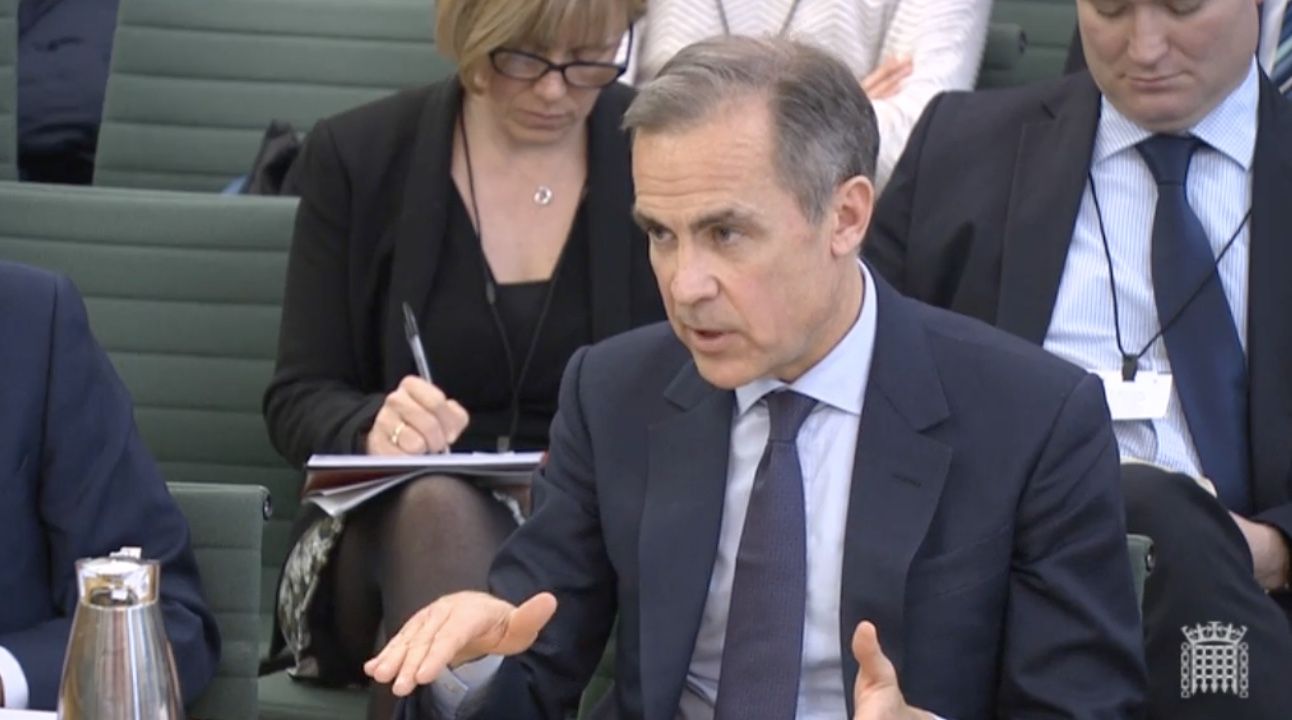 - GBP retains a strong tone ahead of BoE decision.

- Rabobank say Bank trapped in a holding pattern for now.

The Pound was seen outperforming rivals ahead of the Bank of England's May polict decision and Inflation Report release, and the currency could be due a further run of gains over the course of Thursday should policy-makers signal a 2019 interest rate rise is in play.

Consensus is for the BoE to leave its interest rate unchanged at 0.75% at 12:00 Thusday but to reiterate its commitment to raising the official Bank Rate "at a gradual pace and to a limited extent" over the coming years in order to keep the consumer price index in line with the 2% inflation target.

"We expect the MPC to stick to their guidance of slowly rising rates. Their confidence may even be bolstered a bit by some better-than-expected activity data, while the recent rise in oil prices is likely to have pushed the CPI forecast somewhat higher for the second half of 2019. But the MPC is for now trapped in a holding pattern due to Brexit," says Jane Foley, a strategist at Rabobank.

Markets are only expecting an interest rate to be delivered well into 2020, therefore should the dial shift to expectations for a 2019 rate rise the Pound would almost certainly find some support.

However, over recent days we have seen interest rate expectations, and expectations in the analyst community, become increasingly wary of a more 'hawkish' message from the Bank, one where policy-makers hint at the potential for an August interest rate rise.

The Pound has been the best-performing currency over the past week, and we wonder whether this has anything to do with shifting market expectations regarding Bank of England interest rates. 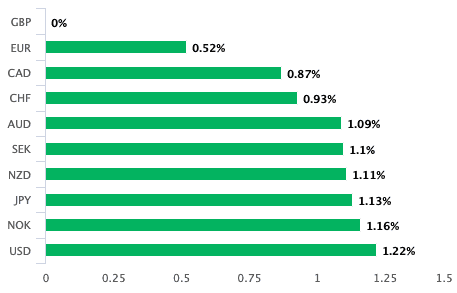 The Pound-to-Euro exchange rate has recorded a half-percent advance over the course of the past week, enough to push it over the 1.16 level. The Pound-to-Dollar exchange rate has meanwhile seen a more substantial 1.22% advance. But if we look at the above graphic, the gains are across the board, and this tells us there is some independent Sterling strength at play.

Bank of England policymakers have said repeatedly over the last 18 months that they need to raise interest rates in order to prevent the consumer price index rising meaningfully above the target but financial markets have, until this week, assigned a zero percent probability to the prospect of a hike coming in 2019 noting Brexit uncertainties remain high.

Better-than-expected economic figures and rising levels of pay growth for workers make it difficult for the inflation-fearing Bank of England, which has consistently warned of the impact that increased pay packets could have on its consumer price target, to abandon its policy stance and respond with higher interest rates.

"Before raising rates again the BoE would probably prefer to wait until Brexit is resolved to avoid adding to the current climate of uncertainty. It might not have that luxury, however," says Kallum Pickering, an economist with Berenberg Bank. "Labour markets continue to tighten and wage growth is accelerating. Inflation expectations have risen on a sustained basis."

Pickering says there is evidence that households are growing increasingly uncertain about the path of rates adds to inflation risks by weakening the BoE’s perceived reaction function.

"On Thursday BoE Governor Mark Carney may hint at another hike as soon as August, even if Brexit remains unresolved heading into H2 2019," says Pickering.

Such an outcome would aid further Pound strength, we believe.

UK economic momentum has been stable since the Bank's February Inflation Report with real GDP probably expandingd by 0.2% quarter-on-quarter in the first quarter of 2019 by Berenberg's estimates, the same rate as Q4 2018.

Household spending remains a bright spot along with the labour market, while confidence and businesses’ risk appetites remain soft.

"Given the continued strong wage data and the six month delay to Brexit, there could well be some increased concerns over inflation risks expressed that has the scope to surprise the markets. That might provide some support for the Pound with political developments surrounding Brexit muted for the time being," says Lee Hardman, a curency analyst at MUFG.

From a currency perspective, reiterating a desire to raise interest rates would be notable in the context of events on the international field where G10 central banks have dropped like flies this year, abandoning commitments to lifting interest rates over the coming quarters.

As other G10 central bank have dialled down their rhetoric on rates, the market's belief in Bank of England claims about Bank Rate had wained in recent months, but analyst commentaries suggest the consensus view is now shifting.

Any such reiteration of a 'tightening bias' would leave the BoE looking something like the only game in town among G7 economies, if not the G10, which could act as a powerful stimulant to Pound Sterling because many investors are still hungry for yield and the improving returns that come with rising benchmark interest rates.

"We expect the tone of Thursday's BoE to suggest they cannot sit on the Brexit sidelines forever. A rate hike isn't likely near-term, but the MPC may want to suggest a 2019 move is possible," says Ned Rumpeltin, European head of FX strategy at TD Securities. "With GBP back in familiar ranges vs both USD & EUR, the MPC may provide some tradable near-term direction. We do not, however, expect the BoE to launch sterling on a new longer-term trend until fresh catalysts emerge.

On Monday pricing in the overnight-index-swap market suggested investors were contemplating the odds of a rate cut before year-end, not a rate hike.

"From pricing in rate cuts early this year, we are now pricing in around 9bps of rate hikes in 2019. A hawkish tilt from the BoE continues to support this move," Rumpeltin says.

Interest rate decisions are normally made in accordance with the outlook for inflation but impact currencies through the push and pull influence they exert over capital flows and the opportunities they present short-term speculators.

But inflation is sensitive not only to supply-side factors, but also changes in demand within an economy. And recent data has suggested the UK economy continues to motor along at a steady pace even in the face of the prolonged uncertainty thrown up by the Brexit pantomime in parliament. 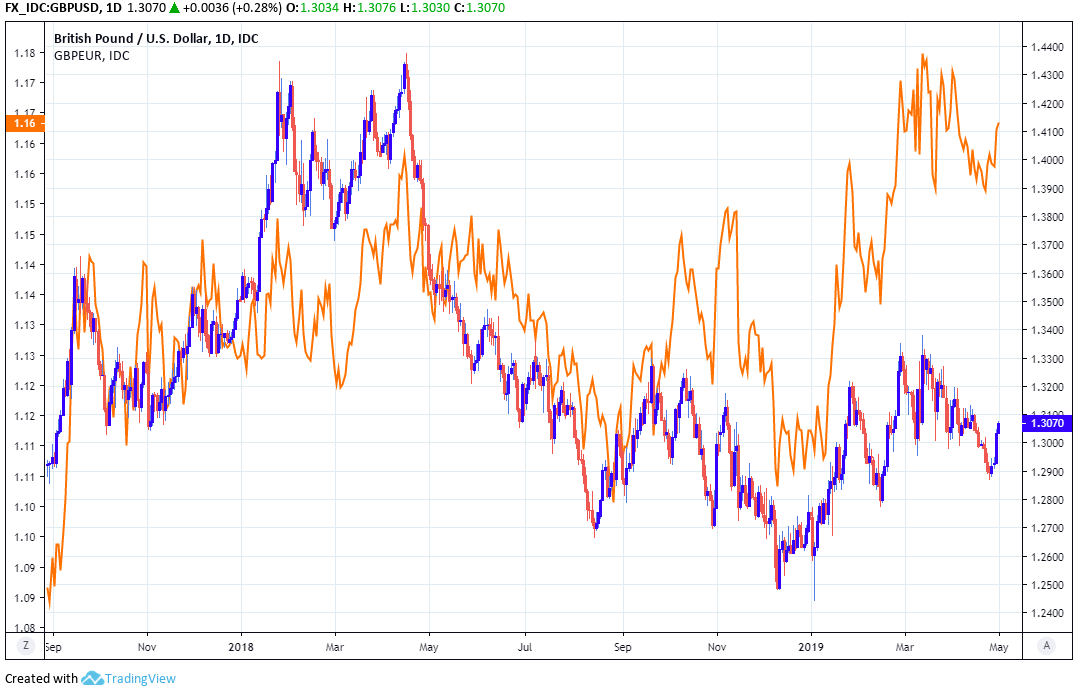 Above: Pound-to-Dollar (red and blue) and Pound-to-Euro (orange) rates at daily intervals.

"We’ve detected that a fair few believe a “hawkish hold” or a hawkish shift in the MPC voting pattern is imminent. The most obvious case for BoE hawkishness is declining economic slack and labor market tightness," says Stephen Gallo, European head of FX strategy at BMO Capital Markets.

Meanwhile, the UK unemployment rate has fallen to a new post-1973 low of 3.9% and wages are growing at their fastest pace in nominal terms since before the financial crisis. Pay adjusted for inflation is also growing at a healthy clip and nurturing economist fears of even higher inflation further down the line.

However, not all analysts see the BoE remaining committed to its previous policy goals, BMO's Gallo says the Bank's message and policy settings will also be designed to prevent the market from punishing Pound Sterling too severely in the short term, as that too could endanger the inflation target. Others are sceptical as well.

While targeting Sterling is by no means an official objective of the Bank, a sharp fall in the value of the Pound due to an adverse Brexit outcome could shake the economy and make their job of maintaining stability all the more difficult.

"By maintaining a 'hawkish' bias the Bank will provide Sterling with something of a cushion," says Gallo who believes the Bank would look to manage an orderly decline in the Pound, "because the current balance of political and Brexit-related risks is still tilted in that direction for the currency".

The Bank of England release their policy decision at 12:00 B.S.T., this will be accompanied by the minutes to the meeting.

At 12:30 B.S.T. Governor Mark Carney and other officials will appear at a press conference to elaborate on the decision and fine-tune their message.