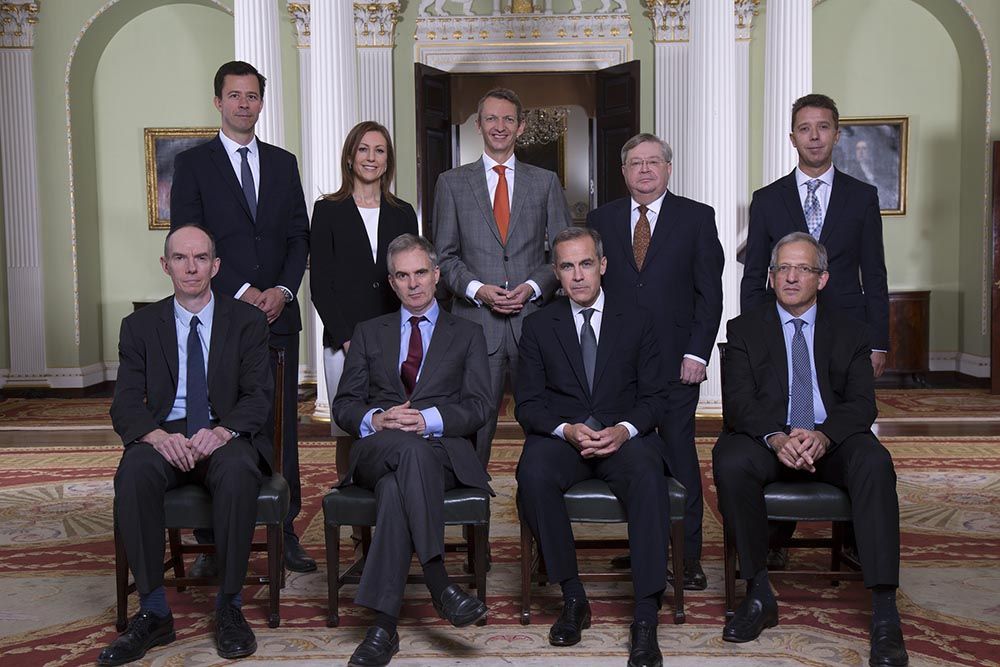 - But the bank is in a bind and offers investors only false hope.

- BMO says it's a seller of Pound-to-Dollar rate rallies this week.

The Pound-to-Dollar rate is on course for further gains this week, according to analysts at BMO Capital Markets, because the Bank of England (BoE) is in a bind that means it will have no choice other than to stick to its 'hawkish' interest rate guidance on Thursday.

Bank of England policymakers have said repeatedly over the last 18 months that they need to raise interest rates in order to prevent the consumer price index rising meaningfully above the 2% target in the years ahead but financial markets have assigned almost a zero percent probability to the prospect of a rate hike coming in 2019.

Many analysts are now saying the BoE will feel compelled to use Thursday's 12:00 rate decision and statement to wake up a complacent market, likely with a reiteration of the long-standing commitment to raising Bank Rate.

"We’ve detected that a fair few believe a “hawkish hold” or a hawkish shift in the MPC voting pattern is imminent. The most obvious case for BoE hawkishness is declining economic slack and labor market tightness," says Stephen Gallo, European head of FX strategy at BMO. "We expect the MPC to retain its bias which has signaled that 'an ongoing tightening of monetary policy over the forecast period, at a gradual pace and to a limited extent' will be required to keep inflation at the 2.0% target." 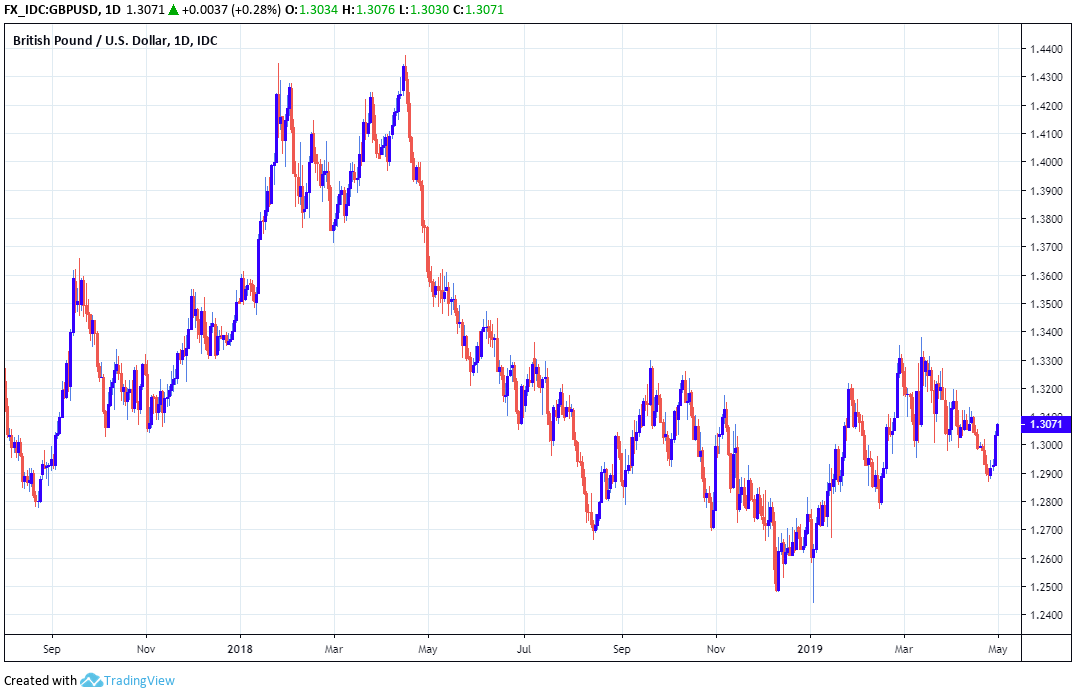 Gallo's forecast might sound like a mundane and unimportant prediction but in the current context where developed world central banks have dropped like dominoes any remaining ambitions to lift their rates this year, it suggests more upside for a Pound-Dollar rate that's already gained 1.3% this week.

Interest rate decisions impact currencies through the push and pull influence they exert over capital flows and the opportunities they present short-term speculators, with hints of rising rates normally encouraging capital inflows and a stronger currency.

This effect could be particularly pronounced Thursday because there's no longer any G10 central banks that offer investors any hope of the improved bond market returns that almost always accompany higher benchmark interest rates.

However, the BoE's rhetoric and any gains for the Pound this week risk giving investors false hope that will ultimately leave them disappointed further down the line and Sterling nursing what could eventually become steep losses.

"Though we doubt the MPC would ever say this publicly, the decision about the level of the base rate these days partly reflects a balancing act between 1) setting the appropriate policy stance for the domestic economy and 2) cushioning the fall in the GBP vs other currencies, but primarily the USD," Gallo warns, in a briefing to clients Tuesday.

Other central banks have moved to sidelines primarily because the global economy is slowing and still in danger of a more protracted and problematic downturn. And despite that UK economic data has remained surprisingly solid over recent quarters, the economy can only remain divorced from the global trend for so long.

This means raising interest rates this year could eventually turn out to be the decision, or catalyst, that sends the UK economy over the edge. But the BoE is also obliged by law to ensure the consumer price index remains around 2% over the medium term and if inflation was to hit 3%, for example, government would demand an answer.

This, combined with  investors fears over a possible adverse long-term impact on the economy of an EU departure, the BoE does not have the same luxury as other central banks in that it can't simply give up its ambition to lift interest rates without endangering the inflation target.

That's because abandoning the commitment to raising rates would send the Pound lower, potentially a lot lower given the Brexit risks to the economy, which would raise import costs and lift the consumer price index just like it did after the referendum. Between then and November 2017 inflation went from 0.6%, which is too low, to 3.1%.

"Given the current Brexit delay until October 31st and forthcoming EU elections, we can easily envisage a scenario in which various risks weigh on the GBP to the point where fluctuations in the currency begin to interfere with other economic variables, thereby forcing the MPC to take action," Gallo says. "However, we would conclude by noting that elevated private debt levels mean the MPC’s ability to raise the base rate numerous times to “defend Sterling” is highly constrained...the easiest way to compensate foreign investors for Brexit-related risks is through a weaker GBP." 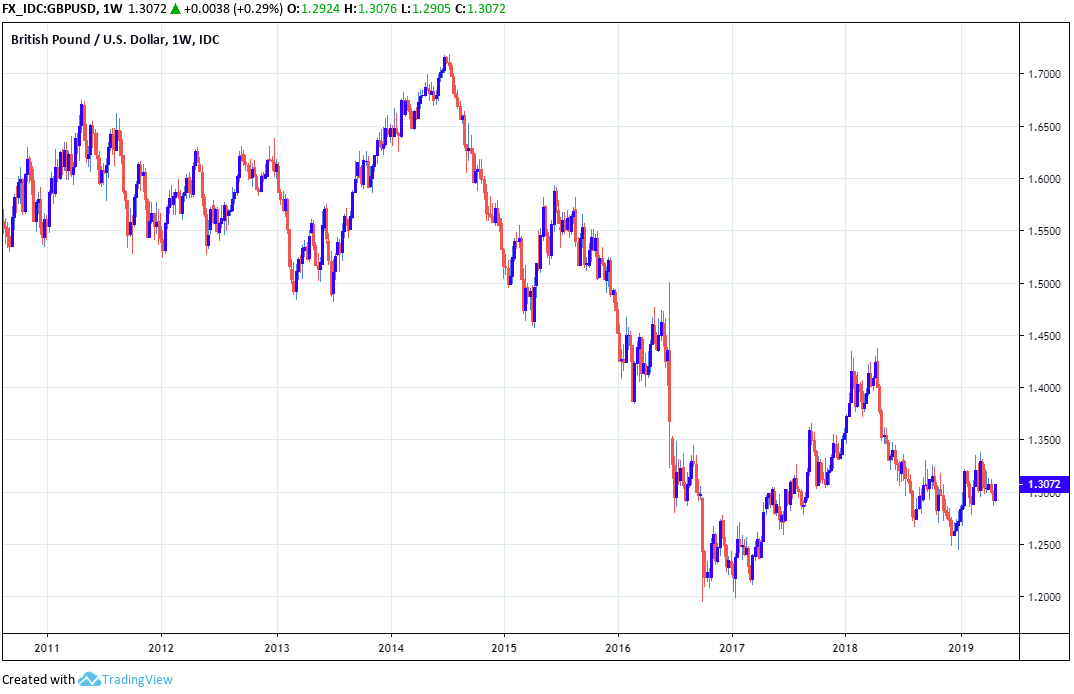 The Bank of England, after having cut its interest rate shortly after the referendum, lifted the Bank Rate back to 0.5% in November 2017. It then announced another interest rate rise, taking the benchmark up to 0.75%, in August 2018 but has largely been sidelined by the Brexit process ever since.

Gallo says the most likely outcome this week the Pound rises by around another 0.5% against the U.S. Dollar following Thursday's meeting, by 0.3% against the Euro and 0.5% against the Canadian Dollar if the BoE sticks to its earlier commitment.

Such an outcome would likely require the bank to dismiss the ongoing global economic slowdown as a temporary phenomenon and to retain its optimistic view of the likely outcome from the Brexit process, Gallo suggested on Tuesday. Although he also warned about a negative medium-to-long-term outlook for Sterling.

"Our overwhelming bias concerning the GBP remains negative, and we believe that the FX market is still grossly underpricing the political and economic risks associated with Brexit, the forthcoming EU elections and the deep divisions within the ruling Conservative Party. As such, we will remain a seller of GBPUSD rallies through this week’s BoE rate decision," Gallo says, signing off his latest note to BMO's clients