The British Pound is seen trading with a bid ahead of the weekend, suggesting to us that the jitters sparked by the 'flash' trading event in Asia mid-week has failed to materially damage the currency's prospects.

Gains were aided by some better-than-forecast data out of the UK economy in the form of the IHS Markit Services PMI which read at 51.2 in December ahead of expectations for 50.7.

IHS Markit say lower fuel prices helped to offset some of the pressure on operating expenses from rising staff wages, however business activity rose at its slowest pace in two-and-a-half years. New work increased only marginally during December, which  contributed to a slowdown in job creation to its weakest since July 2016

Reports from survey respondents suggested that Brexit-related concerns were a key factor weighing on business-to-business spending at the end of 2018. A number of firms also noted that subdued consumer demand had acted as a brake on sales in December.

“The service sector typically plays a major role in driving economic growth, but is now showing worrying signs of having lost steam amid intensifying Brexit anxiety. The final two months of 2018 saw the weakest back-to-back expansions of business activity since late-2012 and highlight how clarity on Brexit is needed urgently in order to prevent the economy sliding into contraction," says Chris Williamson, Chief Business Economist at IHS Markit.

While the overall tenor of the report might be sombre, for currency markets that the data beat expectations is what matters, hence on net this is a Sterling-positive report.

Following the release we see the Pound-to-Euro exchange rate trading at 1.111066 having tested sub-1.10 during the mid-week Asian flash-crash; a familiar level for those who have been keeping an eye on this currency and we believe the technical floor at 1.10 won't be broken unless uncertainty over Brexit ramps up significantly.

The Pound-to-Dollar exchange rate is trading at 1.2646, having traded as low as 1.2437 during the flash-crash event.

For those watching the market for the purpose of making an international payment, we a transfer from Sterling into Euros on January 03 at 11:00 A.M. - we received an approximate rate of 1.0830 from Barclays with a charge of £5.00. The spot interbank GBP/EUR exchange rate at that time was quoted at 1.1063.

At the same time, Horizon Currency were quoting approximately 1.0950, with no added charge, a significant advantage for those willing to take the time to work with a private payments specialist. See indicative retail market rates here.

Data already out on Friday, January 04 has erred to the disappointing.

The annualised figure in house price growth now stands at 0.5%, where economists had forecast a reading of 1.5%.

“It is likely that the recent slowdown is attributable to the impact of the uncertain economic outlook on buyer sentiment," says Robert Gardner, Nationwide's Chief Economist. 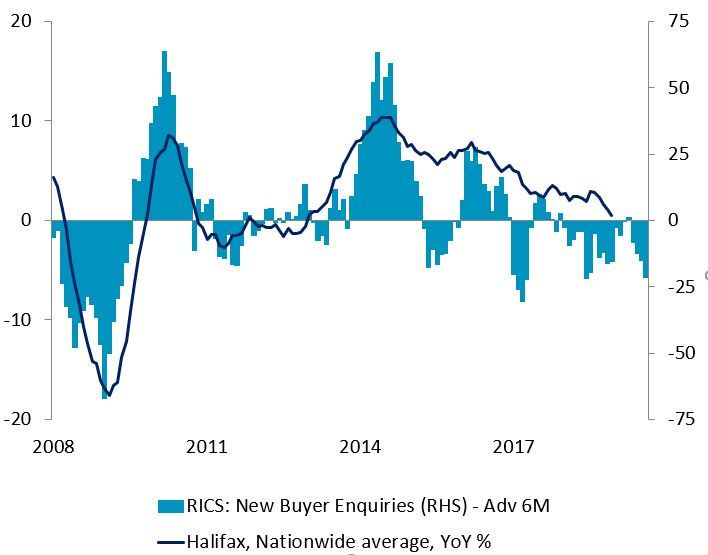 "However, if the economy continues to grow at a modest pace, with the unemployment rate and borrowing costs remaining close to
current levels, we would expect UK house prices to rise at a low single-digit pace in 2019," says Gardner.