- Sterling slumps vs. Dollar and Euro, recovers through Thursday trade

Sterling engaged recovery mode through the course of Thursday, January 03 having suffered sharp losses in a 'flash crash' which earlier ripped through global currency markets which analysts say was prompted by a revenue warning from Apple Inc, the world's most valuable company.

Apple Inc. blamed fewer iPhone upgrades and slowing sales in China in warning about revenues in its most recent quarter, its first such warning since 2007. Its shares tumbled 8% in after-hours trade, but for currency markets the communication added to growing fears growth in the world's second-largest economy is slowing rapidly.

"The news sparked a flash-crash in holiday-thinned currency markets as investors rushed to less risky assets, with the Japanese yen soaring against most major currencies in a matter of seconds," says Andrew Galbraith with Thomson Reuters.

The Japanese Yen proved to be the focus of the moves as investors bought the safe-haven currency in response to news Apple was slashing its earning projections owing to weak demand in China. 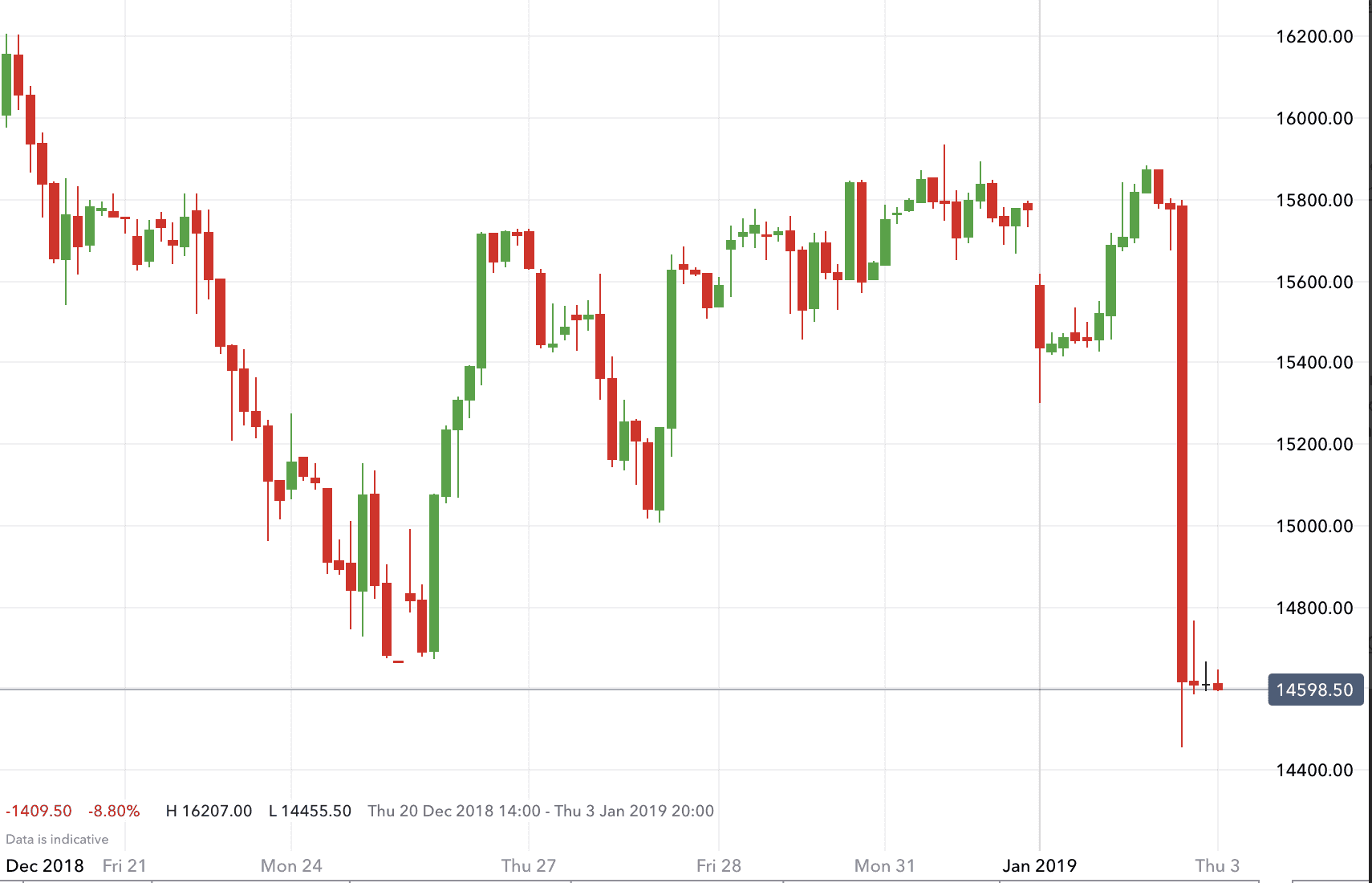 Above: The fall in the Apple share price sparked a chain reaction across currency markets. Image courtesy of IG.

Ahead of the news from Apple markets were already under pressure following the release of data that showed China's manufacturing sector contracted in December.

"Sentiment was weighed down by the dire Chinese PMI in the morning and mediocre European PMIs, but took a further significant hit as Apple issued a revenue warning last night, leading its stock to plummet in after-market trading," says Christin Tuxen, Chief Analyst with Danske Bank.

Flash-crashes tend to happen in thin, illiquid markets and these conditions were present in early Asian trade, the news from Apple came at a particulalry vulnerable time for markets as Japanese traders are on holiday.

The USD/JPY exchange rate collapsed as traders rushed into Yen, the graph below encapsulates the scale of the move: 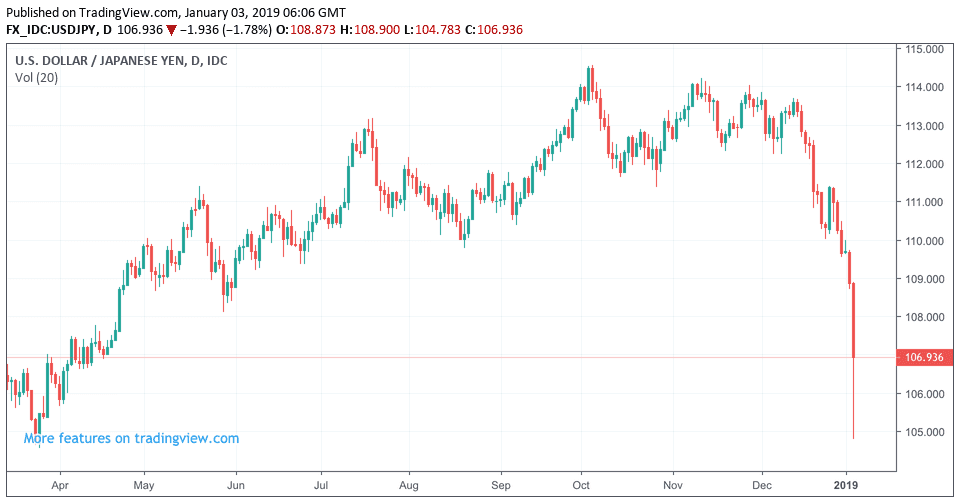 Above: USD/JPY at daily intervals.

While the Dollar suffered against the Yen, it must be remembered that it too is also a safe-haven asset, if not quite to the same degree as the Yen. Hence we saw the Dollar benefit against riskier currencies such as the Pound and Euro.

The moves saw the value of the Pound slump to its lowest level against the U.S. Dollar in nearly two years with 1 GBP buying as little as 1.2442 at one point. 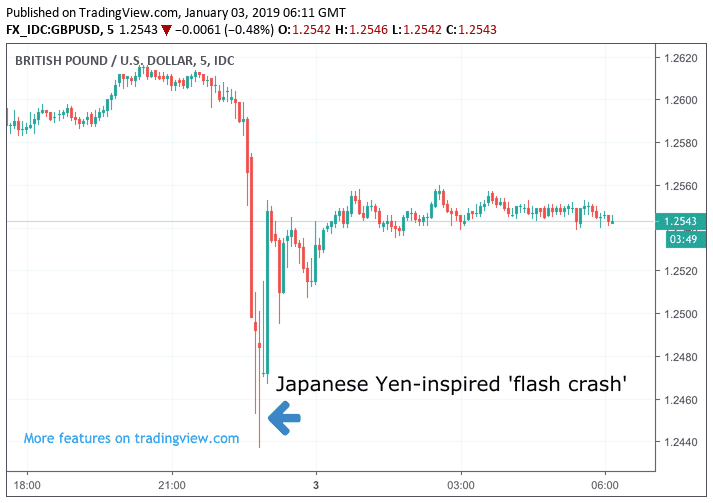 But, when a big global FX move like this takes place we quickly learn that there is a 'hierarchy of safety' with the Yen, Swiss franc and Dollar sitting at the top, and emerging market and commodity-linked currencies at the bottom.

These currencies tend to struggle, hence the Australian and New Zealand Dollars suffered sharp falls across the board. Indeed, traders are telling us that there was particularly heavy selling of the Australian Dollar and Turkish Lira against the yen.

Importantly, it appears the Euro sits above the Pound in terms of safe haven status, most likely because there are simply more Euros out there. 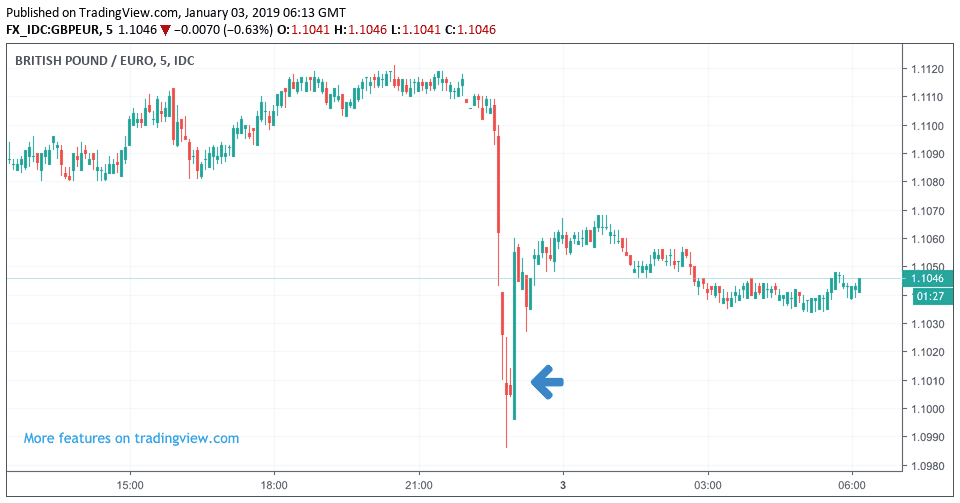 Above: Pound-to-Euro exchange rate at hourly intervals showing the decline in response to the USD/JPY flash-crash.

Importantly though it must be noted that the significant support level at 1.10 was not breached; if a flash crash can't breach this floor, then we are not quite sure what will and it gives us confidence that it is unlikely GBP/EUR will go below 1.10 unless the Brexit narrative deteriorates sharply.

Note: Markets have recovered somewhat but conditions remain incredibly volatile and pose notable risks, and opportunities for those looking to make sizeable currency transfers. We recommend making contact with a FX specialist to both protect yourself and set yourself up to take advantage of any beneficial moves in the future. Find out here what tools are available to protect against market risks.

The Bank of America Merrill Lynch spot trading desk explains that the crash was driven by traditional risk-off cross-JPY pairs selling and margin account liquidation in TRY/JPY, exacerbated by very poor liquidity as Japan is still out on New Year holidays (Back tomorrow).

BofAML Japan Strategist Shusuke Yamada writes that the "flash crash" in USDJPY has highlighted, in dramatic manner, the significance of the domestic bid for yen crosses.

The question is if the return of Japan from holidays can alleviate the pressure on Yen crosses. Shusuke believes not, due to basic BoP improvement, behavioral shifts and bearish external backdrop and recommends staying long JPY spot and volatility.

Apple is a corporate leviathan, having been valued at over $1 trillion until November 2018.

The size of the company is therefore important from a global systemic perspective, and a sudden ~8% fall will naturally cause ripples in global FX markets. However, it's not so much the size of the company that matters for FX markets which amounts to around $3 trillion worth of currencies traded a day, rather it's the signal that a selloff in Apple sends.

“For a while now there’s been an adage in the markets that as long as Apple was doing fine, everyone else would be OK. Therefore, Apple’s rare profits warning is a red flag for market watchers. The question is to what extent this is more Apple-specific, or more macro?" Notes Neil Wilson, analyst with Markets.com.

Wilson says last night’s letter to investors from Apple has sent shockwaves through the markets, and there could be further selling pressures. "Bulls may try to defend the $150 level once the US markets open but it will be tough work, even if there are some long standing Apple bulls who will hold and buy on averages."

Investors holding Apple are doing so at a troubling time for the company which stopped disclosing iPhone unit sales in November, a move Wilson says spooked investors and analysts alike who decided that meant that iPhone sales would be soft.

Shares were already over 31% lower in the last three months ahead of the sharp after-hours decline.

While a lot of the company's woes are Apple-centric, the warning nevertheless tells a lot about what is happening on in the broader global economy, specifically China.

"It tells us that China is experiencing a period of softness. Most of Apple’s revenue shortfall versus guidance, and over 100 percent of its year-over-year worldwide revenue decline, occurred in Greater China across iPhone, Mac and iPad, the company said. It tells us that the trade war between the US and China is having a dampening effect on demand and activity. It is also a factor of dollar strength," says Wilson.