Pound Sterling trades with a soft tone ahead of the Christmas break amidst ongoing uncertainty as to how the Brexit impasse in parliament will be broken.

Against the Euro, Sterling is higher on the day at 1.1084, we note the 1.10 level remains a key support for this exchange rate and believe it will not be broken until more concrete news on Brexit is released. Gains will likely remain limited in light of thinning markets ahead of the Christmas break.

Against the Dollar, Sterling is flat on the day at 1.2885, GBP/USD actually appears to be in something of a short-term uptrend as it recovers from the sub-1.25 levels witnessed mid-month.

We would expect further consolidation in this exchange rate, not due to Sterling strength, rather because the U.S. Dollar lags its peers in the wake of the mid-week U.S. Federal Reserve briefing.

Data out ahead of the weekend has given markets a lot to chew on.

The current account deficit widened during the third-quarter, according to Office for National Statistics (ONS) data released Friday, but other figures confirmed the economy also rebounded out of an earlier soft patch during the period.

The UK current account deficit widened to -£26.5 billion during the third-quarter, up from -£20 billion previously and far higher than the -£21.7 billion deficit anticipated by the market.

Currency markets care about the data as it paints a telling picture of international demand for a currency and provides insight into the extent to which a nation is exposed to the changing sentiments of investors.

All main components of the current account balance worsened during the recent quarter, although the greatest contribution to the deterioration coming through the primary income balance.

Simultaneously, the ONS said UK government borrowing was £7.2 billion in November, down £0.9 billion from the same period one year ago and the lowest November borrowing figure for some 14 years.

Finally, the ONS also confirmed that the economy grew by 0.6% during the three months to the end of September, with the services sector having led the way.

However, after a dire first quarter that was induced by poor weather in February and followed by an uninspiring second quarter, official data suggests the economy is still set to slow this year.

Consensus among economists is pointing to GDP growth of a paltry 1.3% for 2018. With the economy up 1.1% for the year at the beginning of the final quarter, that conensus could yet prove too pessimistic, although a repeat of 2017's 1.7% expansion would still be a tall order.

2) Business Confidence Plummets
The UK economy requires the Brexit impasse to be solved - in one way or another - as the uncertainty is having a material impact on business sentiment.

The Lloyds Business Barometer offers some sobering news for UK economy watchers on Friday, December 21 after the barometer hit its lowest level since June 2016 in December. 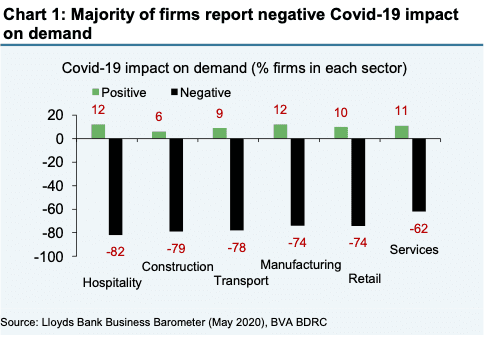 Lloyds report expectations for staffing levels at UK businesses also fell to the lowest level this year, while net concerns about the potential business impact of the UK’s decision to leave the EU have risen. 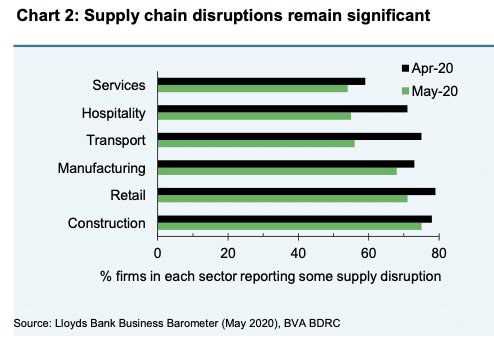 Business confidence levels have fallen in all broad industry sectors and sit below their respectively 2018 averages. Sentiment is highest in London and the West Midlands, and the lowest in Scotland and the South West.

The Bank of England yesterday lowered their forecasts for the UK economy for the fourth quarter 2018 based on the weaker business surveys coming in, a decision that will only be reinforced by today's news from Lloyds.