The Pound rallied against the Dollar Thursday but nursed losses against a resurgent Euro on Thursday after the Bank of England offered little new concrete guidance on where interest rates were headed in 2019, while warning the risks to the economic outlook have intensified over recent weeks.

The path of UK interest rates are traditionally a key driver of the value of Sterling, and warnings that rates might go higher or lower in the event of a 'no deal' Brexit saw foreign exchange traders opt out of taking directional bets on the currency at this juncture.

Bank of England policy makers voted 9-0, in line with expectations, to keep interest rates unchanged at 0.75%, but it was always the guidance on the outlook that would capture the market's attention.

In the minutes relaying the decision, the Bank warned, "Brexit uncertainties have intensified considerably since the Committee's last meeting."

The Bank notes these uncertainties are weighing on UK financial markets, "UK bank funding costs and non-financial high-yield corporate bond spreads have risen sharply and by more than in other advanced economies."

Economists at the Bank lowered their forecast for quarter-on-quarter GDP growth in Q4 to 0.2%, from 0.3% previously, mainly due to weaker business surveys. It now expects growth to remain around Q4's rate in Q1 too.

Furthermore the Bank notes UK-focused equity prices have fallen materially while Pound Sterling has depreciated further, and the currency's volatility has risen substantially.

The gloomy assessment by the Bank is underscored by the following assessment:

"The further intensification of Brexit uncertainties, coupled with the slowing global economy, has also weighed on the near-term outlook for UK growth. Business investment has fallen for each of the past three quarters and is likely to remain weak in the near term. The housing market has remained subdued. Indicators of household consumption have generally been more resilient, although retail spending may be slowing."

The Bank did however note the strong labour market dynamics, particularly pay which has has risen to 3¼%, and is therefore stronger than anticipated in the Bank's November Report.

Based on the underlying trends in the economy the Bank believes an ongoing tightening of monetary policy over the forecast period, "at a gradual pace and to a limited extend, would be appropriate."

"The minutes of this week's MPC meeting indicate that it won’t waste  any time to raise interest rates after MPs finally have signed off a Brexit deal. A May rate hike remains our base case; the mere 25% chance currently priced-in by markets looks too low," says Samuel Tombs, analyst with Pantheon Macroeconomics.

However, this assessment remains dependent on the type of Brexit that takes place in March 2019.

Therefore, the outlook for interest rates, and by extension the Pound, rely on what happens during the first three months of 2019 with regards to Brexit.

"It remains about politics to drive sentiment in GBP. Unless there is clarity with respect to the UK being able to avoid a no-deal Brexit, it is difficult to see material GBP upside risks. If anything, falling political uncertainty is needed in order to trigger a return of real money flows, which would be needed in order to drive the currency sustainably higher," says Manuel Oliveri, a foreign exchange srategist with Crédit Agricole.

AdvertisementBank-beating GBP exchange rates. Get up to 5% more foreign exchange by using a specialist provider to get closer to the real market rate and avoid the gaping spreads charged by your bank when providing currency. Learn more here

The Pound rallied against the Dollar Thursday after official data revealed sharp pick-up in retail sales during the November month, dumbfounding a gloomy consensus that had looked for only a meagre increase. However, advances against the Euro were not forthcoming as the single-currency continued its run higher in response to progress on the Italian budget standoff between the EU and Italy.

Sales rose by 1.4% in November, more than reversing a -0.3% contraction seen in October, which was ahead of the consensus for growth of 0.3%.

This pushed the quarterly pace of growth back up to 0.4%. It also drove annual growth to 3.6% for the year to the end of November, up from 2.4% previously and far ahead of the consensus for a paltry increase of 1.9%.

The household goods segment was the star of the show for November, with sales in that category rising by 5.3% when compared with the previous month, although other non-food stores also did well. 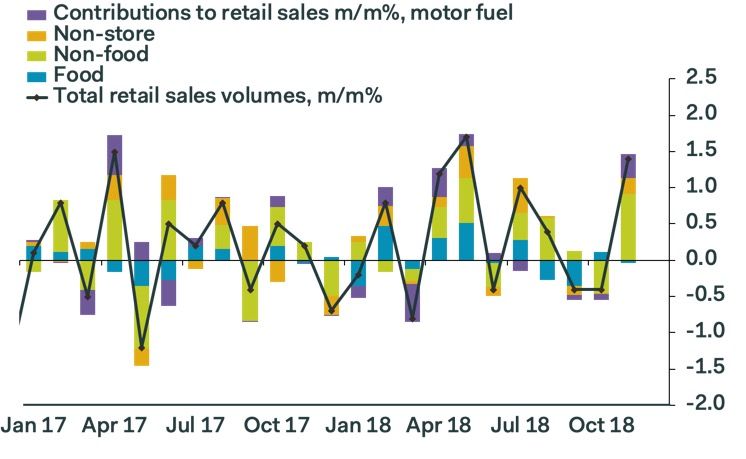 "With inflation continuing to fall back – note that the retail sales deflator slipped further from 1.6% in October to 1.3% – and pay growth on the up, there should be scope for consumer spending growth to gather some momentum further ahead," says Thomas Pugh, an economist at Capital Economics.

However, and on the downside, the Office for National Statistics says much of the household goods increase was the result of spending in the Black Friday sales.

And recent years have established a precedent where spending picks up in November, as consumers bring forward Christmas purchases, only for sales to then fall in December and January.

"It’s unsurprising that the official measure of retail sales picked up in November, given the decline in sales in the previous two months and the still-growing tendency of consumers to do more Christmas shopping on Black Friday," says Samuel Tombs, chief UK economist at Pantheon Macroeconomics.

Tombs says Thursday's spike in retail sales will eventually be revised away through a "seasonal adjustment" process the ONS has developed for dealing with the Black Friday phenonmenon. This poses a risk to December and January retail numbers.

The Pound-to-Dollar rate was quited 0.49% higher at 1.2686 following the release, although the Pound-to-Euro rate was down -0.24% at 1.1060 as the Euro trounced Sterling in the race to recapture lost ground from the Dollar in the wake of Wednesday's Federal Reserve interest rate statement.

There had been increased concern about what November's retail sales report would reveal, given a string of profit warnings from London-listed retailers in recent weeks.

Companies including Asos, Dixons, Primark, Ted Baker, John Lewis and H&M have downgraded guidance for full-year sales growth this quarter, leading many economists to conclude that consumer spending was slowing.

However, what may have been overlooked is the lofty expectations of the economy, and earnings expectations embedded in stock prices, back at the beginning of the year.

Since January the outlook for the Brexit process has become more clouded and President Donald Trump's so-called trade war with China has dented business confidence and international trade activity the world over.

All of this saw growth in the U.K., Eurozone China and elsewhere has slowed, while inflation has picked up due to an earlier rise in oil prices, crimping household incomes.

Against this backdrop downgrades to company revenue and profit guidance were always likely and for what it's worth, most of those companies are still suggesting they will grow for 2018, albeit at a lesser pace than previously thought.

3) The Value of the Pound on Retail Markets

Sterling markets are lower on Thursday than they were a day before, with Sterling having lost about 0.5% against the Euro.

However, the Federal Reserve event overnight didn't go the Dollar's way, and therefore the Pound maintains familiar levels against the Greenback.

1 GBP buys 1.1096 EUR on the interbank market at the time of writing. For those making international transfers we believe high-street banks are offering a Pound-to-Euro exchange rate in the region of 1.0825-1.0950. Independent specialists will be closer to the market, likely offering in the region of 1.0990-1.1040. More details here.