The Euro-to-Dollar exchange rate could be vulnerable to renewed weakness during the summer months, according to analysts at Danke Bank, who warn the exchange rate might be pushed back to the bottom of its 2018 range.

Recent shifts in relative economic growth mean momentum is now stronger on the other side of the Atlantic than it is in Europe, while there are signs that Eurozone economic momentum may have peaked last year.

Moreover, the US economy is still expected to benefit from President Donald Trump's tax reforms and other stimulus later in 2018, which could further tip the economic balance in favour of the US Dollar.

"Euro-zone growth momentum has worn off and data have surprised on the downside, whereas US releases have managed to keep up," says Christin Tuxen, chief analyst at Dankse Bank. "The euro-zone has already been surprising on the downside for some time but trade-war concerns and past EUR strength remain a headwind."

Equity flows have been a big driver of the Euro's appreciation during the last year as, after the French Presidential election of 2017, fears over the Eurozone's future eased and economic recovery took hold. This led to a boost in expectations for earnings at Eurozone companies, heightening the international appeal of continental stock markets.

This saw international investors flood back into the bloc in their droves, buying heavily into Eurozone stock markets without hedging their currency exposure, which was a sign that those investors expected both Eurozone stocks and the currency to do well in subsequent periods.

That euphoria ultimately helped push the Euro some 15% higher against the US Dollar during the 12 months to the middle of April while also lifting the common currency by close to 10% on trade weighted terms. 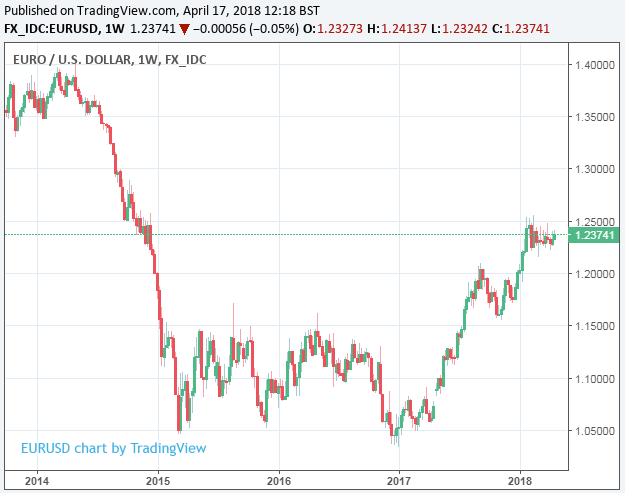 However, with markets now concerned about so called trade protectionism from the US, these flows could be put at risk if the White House were to target the Eurozone's relatively "open economy" with tariffs.

"A full-blown trade war could support the USD as the relatively open euro-zone economy would lose more than the US from a decline in global trade," warns Tuxen.

Fears of a so called trade war have risen since the beginning of March after President Donald Trump imposed tariffs on imports of steel and aluminium into America, before targetting China with a range of other tariffs designed as a rebuttal to alleged intellectual property theft.

These latter tariffs drew and equal and countervailling response from China, which then prompted President Donald Trump to threaten yet more levies against China, leading markets to grow concerned about a tit-for-tat economic conflict embroiling the world's two largest economies.

"Short-term, if the US holds up better than the euro-zone growth- and earnings-wise, equity flows could weigh on the cross," says Tuxen. "A slide within the 1.21-1.26 range could be seen near term but a firm break higher on ECB will, in our view, constitute the next big move in the pair."

The EUR/USD rate was quoted 0.15% lower at 1.2365 during the noon session Tuesday. The pair's advance has stalled in recent months as growth momentum slowed and tensions across global markets rose, leaving it with just 3% gain for the year to date. Despite this softening price action and the prospect of continued weakness during the summer months, Tuxen holds a bullish outlook for the exchange rate in 2018 overall.

"In our base case of a negotiated outcome of the trade war, EUR/USD should stay supported," Tuxen writes, in a note Tuesday. "Our medium-term story remains unchanged: a turn in the capital tide from USD to EUR is brewing as the relative attractiveness of EU versus US assets is on the rise." 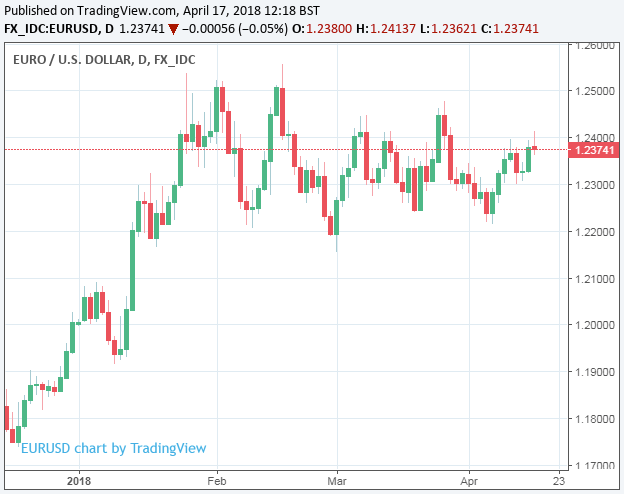 One thing for certain is the Eurozone economic recovery is much less advanced, or is much younger, than that of the US. In fact, the US is now widely seen as being in the mature stage of its current economic cycle, rather than in a recovery position, which suggests the Eurozone may have a lot more left in the tank than the US economy.

After all, the Federal Reserve has raised interest rates six times since the end of 2015 while the European Central Bank is yet to fully shutter its crisis-era quantitative easing (bond buying) program and an initial Eurozone interest rate rise remains at least one year away. This is positive for the Euro.

Ultimately, the European Central Bank and the timing of its decisions around the ending of its quantitative easing programme will be key to how soon the common currency is able to recover a firmer footing against the US Dollar this year.

"While we stress that ECB remains on a path towards ‘normalisation’ and we expect a gradual shift in forward guidance during the course of the year, risks are increasingly tilted towards a dragged-out ‘exit’," says Tuxen.

Driving this caution is the view by some ECB policy-makers that Eurozone inflation remains subdued while the strength of the Euro itself could hamper growth dynamics, as noted in the Bank's latest set of meeting minutes.

The ECB said in December it will continue buying €30 billion of European bonds each month until “September 2018 or beyond”, with the final stoppage subject to developments around inflation. Until December it had been buying €60 billion or more each month in an effort to stoke consumer price pressures by spurring economic activity.

QE is thought to do this by forcing down bond yields, which reduces borrowing costs for those in the real economy, but these lower borrowing costs also mean lower returns for investors. This is why QE has compressed the value of the Euro, because investors have been less attracted to the lower relative returns offered by it.

Markets had previously hoped the ECB would cut the QE program dead in September this year and, maybe, even raise interest rates at some time in the first half of 2019. However, recent months have seen them become less optimistic so that most analysts now suggest QE will probably end in December instead.

Nonetheless, Tuxen and the Danske Bank team say this change in expectations shouldn't have much impact on the common currency outside of the very short term.