The Euro could be about to turn lower argue analysts at the world's largest foreign exchange dealer, J.P. Morgan.

The call comes as a recent deterioration in Eurozone economic data has some in the analyst community calling for a more cautious approach toward the Euro following a multi-month period of outperformance that coincided with exceptional economic growth surprises.

“Negative data surprises have forced our economists to lower their sights on 2Q18 growth from 3% to 2.5%q/q saar and pencil in a short taper in 4Q18 instead of QE ending in September as earlier envisioned,” says Arindam Sandilya, an FX strategist at J.P. Morgan. “EUR now features as a sell within our rule-based economic momentum framework as a result of this forecast revision and some trimming of heavy spec longs in the near-term should not come as a surprise.”

Last week, a series of forward looking indicators that attempt to predict the future health of the Eurozone economy all took a bearish turn lower. IHS Markit purchasing managers indices measuring changes in the Eurozone manufacturing and services industries both pulled back markedly during March as economic momentum waned, the strong Euro hit export demand and fears of a possible trade war dented optimism among companies.

These factors culminated in the March Flash Eurozone PMI showing business activity growing at its slowest pace for over a year, which may have provided the impetus for the downgrade to GDP forecasts at J.P. Morgan. Furthermore, Tuesday saw the European Commission’s March economic sentiment index fall back to its lowest level since September last year, although it still remains at historically high levels.

“The further fall in the EC’s measure of economic sentiment in March echoes the message from the other surveys that euro-zone GDP growth may have peaked,” says Jessica Hinds, a European economist at Capital Economics, in a note Tuesday. “With the pace of GDP growth set to soften and inflationary pressures still muted, we expect the ECB to tread very carefully and to continue to stress that interest rate hikes remain a long way off.”

This, taken together with the above comments on the single currency, could be bad news for EUR/USD bulls. The EUR/USD rate was quoted 0.44% lower at 1.2402 Tuesday. 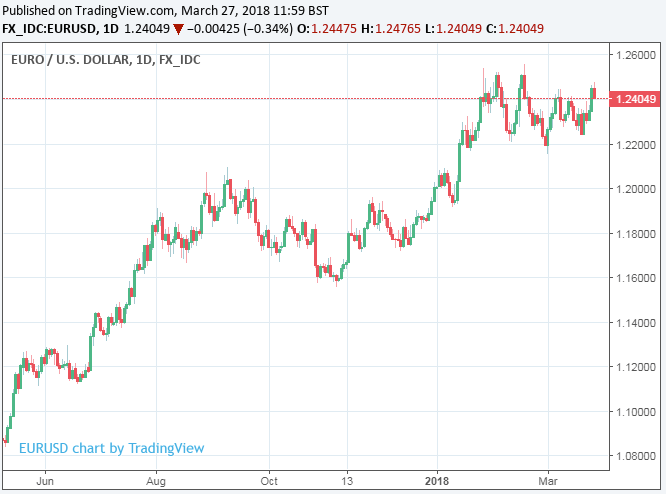 A Slower Exit by the ECB?

This faltering of economic momentum comes amid continued mixed messages over how soon the European Central Bank will wind down its quantitative easing program. Hopes of an end to its bond buying have been a significant catalyst behind the Euro’s 15% rise in the last 12 months.

Monday saw European Central Bank and Bundesbank hawk Jens Weidmann call for a prompt end to the ECB’s QE program while tacitly approving of market expectations for an initial interest rate rise in June 2019. However, this was countered on Tuesday by ECB governing council member and Austrian central bank head Ewald Nowotny who called for only a gradual winding down of the stimulus program - to be decided in the summer.

“The political uncertainty coupled with the still uncertain timing of the ECB QE exit should keep the EUR-bulls on the fence for now. More range trading in EUR/USD may ensue as a result,” says Valentin Marinov, head of G10 FX strategy at Credit Agricole.

The ECB reduced the rate of monthly purchases to €30 billion per month in January 2018 and said this reduced pace would continue until “September 2018 or beyond. It had bought €60 billion or more of Eurozone bonds per month during the years between January 2015 and January 2018 in an effort to spur a recovery of inflation, which had fallen precipitously for a number of years and saw consumer price growth turn negative in 2015.

“The EUR-bulls are also seemingly reluctant to add aggressively to their existing longs in the absence of a clear signal from the Governing Council that the end of QE is indeed drawing near. In addition, the lingering political uncertainty in Italy may be discouraging portfolio inflows into EUR-denominated assets at a time when the rally in the Eurozone stocks has lost its upward momentum due to global risk aversion and fears of trade wars,” adds Marinov.

Already, J.P. Morgan have altered their forecasts on this and now project the ECB will wait until the end of the year before stopping its bond purchases while others also appear to be doing the same.

“We continue to think that the ECB will set out a clear roadmap for the end of its asset purchase programme in June/July. We expect a tapering period of 6 months (3 months EUR 20bn p/m and 3 months EUR 10bn p/m). We do not expect the first rate hike to follow until the second half of next year (10bp in September and another 10bp in December)," says Nick Kounis, head of financial markets research at ABN Amro, in a note Monday.

Kounis and the ABN Amro team also said that, as the most hawkish member of the ECB governing council, Jens Weidmann will by no means represent the majority view of those on the ECB’s monetary policy committee - the governing council. Kounis projects the ultimate timing of a QE exit is likely to be slower than suggested by Weidmann. 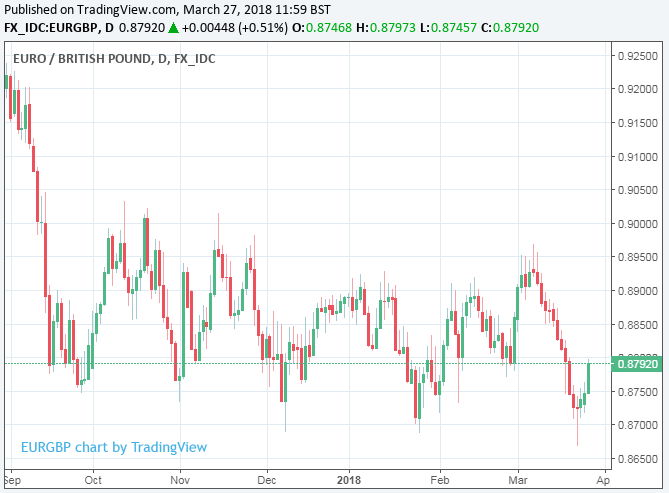 EUR/NZD and EUR/AUD Can Still Rise

Despite mounting expectations of a slower march by the ECB toward the exit door of its stimulus program, there are still other countries and currencies where the so called normalization of monetary policy will be slower than it is in the Eurozone. Chief among these are Australia and New Zealand.

Interest rates are at record lows in both Antipodean countries while analysts and economists almost unanimously expect them to remain there long into the 2019 year. This has provided a powerful and ongoing tailwind to the EUR/AUD and EUR/NZD exchange rates over the last year, with both having risen by double digit numbers in percentage terms, which could continue regardless of whether the ECB winds down its QE program in September or December.

“De-synchronized central bank policy cycles, sensitivity to protectionism-inspired risk market stress and medium term valuations continue to underpin our constructive stance on EUR/AUD and EUR/NZD. We would have preferred to see a more forceful de-coupling of the Euro from the commodity bloc as trade anxieties mounted this week, but were frustrated by the co-incidence of weakerthan-expected European PMIs,” says J.P. Morgan’s Sandilya.

Sandilya notes that J.P. Morgan’s models are flagging the Euro as a sell but counters that there is an an offset, or an exception for the two above exchange rates.

“For EUR/AUD and EUR/NZD, the offset is that antipodean data and policy developments over the past two weeks did little to persuade us that shorts in these currencies require a re-think,” the strategist writes, in a recent note. “Policy rates in both countries, particularly Australia, have substantial room to fall to re-align with the serial disappointment in real activity in recent months.”

Fourth quarter GDP growth fell further than was expected in both Australia and New Zealand while recent inflation developments, which are key to an eventual change in Antipodean monetary policies, have also disappointed. Both countries are hampered by high household debt levels, low wage growth and cloudy outlooks for labour markets.

These factors are seen preventing the Reserve Bank of Australia and the Reserve Bank of New Zealand from raising rates anytime soon. This is while the European Central Bank is still expected to withdraw stimulus, the Federal Reserve is continuing to tighten and central banks in both the UK and Canada are also raising interest rates.

“Our core thesis is that this should increasingly exert a greater influence on exchange rates as G3 central banks lift rates further and/or move closer to normalization,” says Sandilya.

J.P Morgan strategists have recommended to clients that they bet on a rise in the EUR/AUD exchange rate and have entered this trade themselves, buying at 1.5880 on 02 March and placing a stop loss at 1.5575. They also recently profited from an derivatives trade that enabled the bank to exploit a rise in the EUR/NZD rate during the three months to November 21, 2017. 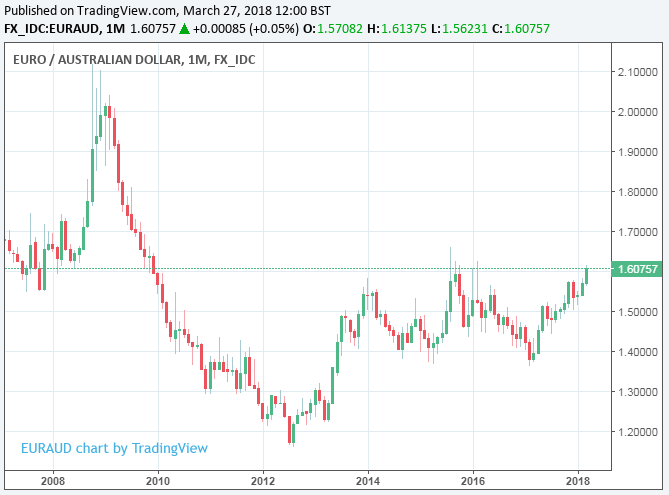