The euro to dollar exchange rate could yet suffer a notable move lower if the forecasts from a leading Swedish investment bank is correct.

Back in the Spring of 2015 foreign exchange strategist Pierre Carlsson and his team at Handelsbanken Capital Markets forecast that the euro / dollar exchange rate was due to settle into a period of consolidation.

The accurate prediction on the pair’s quagmire was based on studies favoured by behavioural aspects such as Wave Theory and fractal geometry.

Fast forward to Spring 2016 and it could be that things are about to change once more if Carlsson’s latest forecasts for the currency pair are correct.

"Now, the consolidation period is nearing its end and we believe a renewed decrease in the exchange rate will take place," says Carlsson, "in August last year, the EURUSD rallied during the collapse in risk appetite. We still have not taken out the 1.1714 high, which previously led us to believe that the consolidation was taking the form of a narrowing triangle."

The currency strategist says this option appears less likely, especially as it is negated in the case of the US dollar index.

The interesting point to note is that while the euro is forecast to head notably lower, Handelsbanken are saying patience is required as the current period of strengthening is not yet done.

Carlsson and his team suggest that we should see a test, and a probable break, of the 1.1714 highs, with the price stopping at around 1.18.

"We recommend selling EURUSD on rallies, as we expect it will trade lower after the summer," says Carlsson. 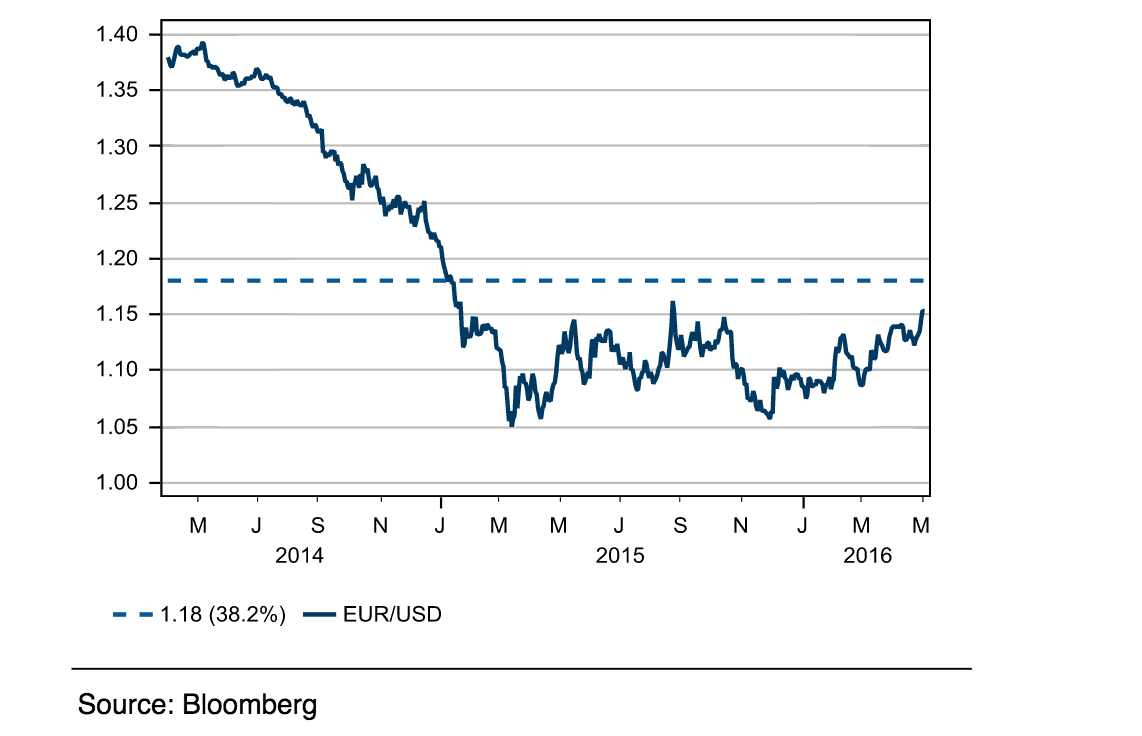 Handelsbanken are forecasting a return to 1.10 by the middle of 2016 ahead of a decline to parity towards the end of 2016.

Yann Quelenn at Swissquote Bank, in Gland Switzerland, agrees with the view that the euro’s destiny lies lower:

"Breaking below this level, the short-term bearish reversal could encourage a further sell-off. Technicals would suggest some consolidation in the pair with a small bias to downside presently but any push through 1.1535 would put the 1.16 level back in the frame," says Brenda Kelly at London Capital Group.

We note that dollar is being bid again with markets happier to buy dollars at these discounted levels having noted that the sell-off witnessed over recent weeks may be too aggressive.

Driving the view is the suggestion that the US Federal Reserve could well raise interest rates in June.

Such a move would invite another rise later in the year which should in turn keep a steady inflow of currency into US treasuries.

It is this demand that could see the dollar put its worst levels of 2016 behind it and finally make some notable inroads into the euro.

What we have at present, based on the evidence, is that these are indeed good levels from which to buy dollars using euros.

The prospect of a deeper decline does appear to be a valid one however those who have an appetite for risk and would like to nab a rate around 1.18 should probably transact half their requirements at spot and set a buy order that will be triggered by a further rally.

If not met over the next two months then concessions should be made for lower rates.