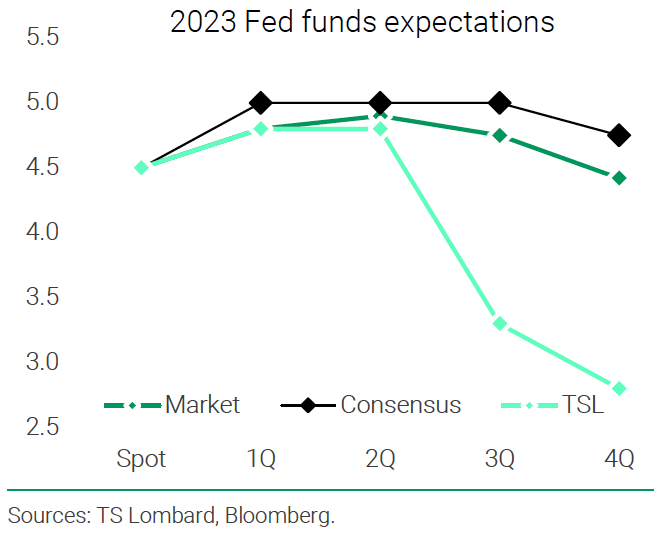 Above: Market and consensus are less dovish than T.S. Lombard.

The Federal Reserve is on course to cut interest rates as early as mid-2023 according to new research and the Euro will appreciate "significantly" against the Dollar as a result.

TS Lombard - an independent economics research provider and consultancy - advises it has changed its views as a result and is now a "Dollar bear".

"We are bearish USD. At the beginning of December, we downgraded the dollar to neutral as it was failing to respond to bullish drivers. Since then, we have become even more cautious on the dollar," says Skylar Montgomery Koning, Senior Macro Strategist at TS Lombard.

The Federal Reserve is expected by markets to raise interest rates by a further 25 basis points in February, but TS Lombard says this will be the last based on clear evidence of inflation slowing sharply and a first cut will follow in mid-year.

The U.S. economy is slowing sharply with the latest signal coming from U.S. retail sales that were down by -1.1% in both overall and core terms in December, which was more severe than the -0.8% markets were expecting.

The Dollar dropped following the figures and the Euro to Dollar exchange rate (EUR/USD) rallied to a fresh multi-month high at 1.0887 before retreating back to the lower 1.08's.

"We have further evidence of weaker activity and an increasingly benign inflation backdrop, which clearly suggests we are in the end game for Fed rate hikes," says James Knightley, Chief International Economist at ING Bank.

ING expects two more 25bp hikes in the cycle, but "with recessionary forces intensifying and inflation looking less and less threatening, the prospects for Fed rate cuts later in the year are growing," says Smith.

TS Lombard says the market will move to price in recession and corresponding cuts, creating downward pressure on yields and bull steepening in the yield curve.

U.S. bond yields are set to underperform relative to those elsewhere, creating a downward pull on the Dollar against a number of currencies.

"Rate differentials have turned against the dollar," says Koning.

Above: "Rate differentials have turned against the dollar" - TS Lombard.

"For FX, it is the momentum of yield differentials that are key; we quantify momentum by looking at relative rate differentials vs their 200DMA. Rate differentials (Europe less US) across the curve have all gained upside momentum, crossing their 200DMA and signalling EUR/USD appreciation. Moreover, the 2y differential, which signalled the bullish turn of the dollar in June 2021, has now moved in favour of euro upside for the first time since then," says Koning.

TS Lombard says the 2023 story for markets will shift from whether the Federal Reserve will cut to how deep and investors are not yet prepared as priced cuts for 2023 stand at just ~60bp.

This story, therefore, has more to offer Dollar bears.

The European Central Bank (ECB) is meanwhile expected to maintain a more 'hawkish' stance, conferring support to the Euro.

"The ECB has an overtightening bias, but also began its tightening cycle later than the rest of DM and so has done less cumulative tightening. This means that European rates are less restrictive, giving the bank more room at this stage in the cycle to hike and then pause," says Koning.

The ECB is expected to hike interest rates by 50bp in both February and March, and potentially even further if the latest noises from Governing Council members is to be believed.

TS Lombard says the 2006-07 period offers a recent template for short-term Fed-ECB divergence: At that time, the ECB had started its hiking cycle later and for this reason, still had room to hike as the Fed paused.

In the second half of 2007, speculation around Fed cuts increased until they were forced to cut.

"The ECB followed around a year later, but EUR/USD appreciated significantly over this two-year period," says Koning.