"Fundamentally speaking, we think GBPUSD is a near-term sell in the vicinity of 1.24, but in this weak USD market we would be unlikely to commit much risk to that trade" - BMO Capital Markets.

The Pound to Dollar exchange rate neared some of its best levels since last June after multiple official figures highlighted a clear deterioration of the U.S. economy going into year-end while revealing scope for a further softening of inflation pressures being in the pipeline.

Industrial production fell for a third month running in the U.S. during December with the downturn deepening to a greater extent than anticipated by consensus while coming alongside negative revisions to estimates of earlier production.

"Coming on the back of such a poor retail sales report it reinforces the message that recession is on its way and we could in fact already be in it," says James Knightley, chief international economist at ING.

"Note Microsoft's announcement of 10,000 job losses this morning (nearly 5% of its workforce) – remember jobs are always the last thing to turn in a cycle given labour data is such a lagging indicator," Knightley says. 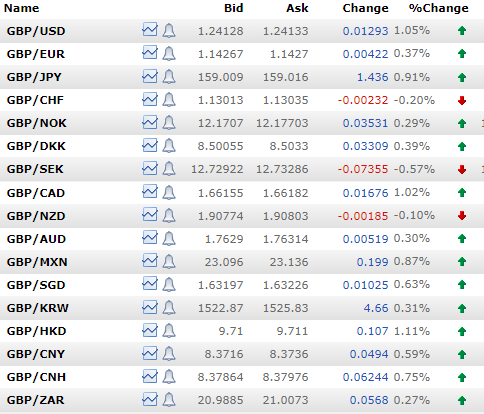 The industrial data came shortly after Census Bureau figures showed retail spending falling further in December than most forecasters anticipated in a further sign of the economy beginning to succumb to the effects of Federal Reserve (Fed) interest rate policy.

Sales were down by -1.1% in both overall and core terms following steep declines in purchases of large ticket items like cars but with demand for other items including those in the "control group" also falling -0.7% despite

"That was well below the consensus expectation of -0.3% for that group, and shows that consumers are becoming increasingly cautious about spending on discretionary items amidst higher interest rates," says Katherine Judge, an economist at CIBC Capital Markets.

On a brighter note, the Bureau of Labor Statistics said producer prices had fallen -0.5% on the month in December while rising only 0.1% when food and energy items are removed from the basket for which prices are analysed. 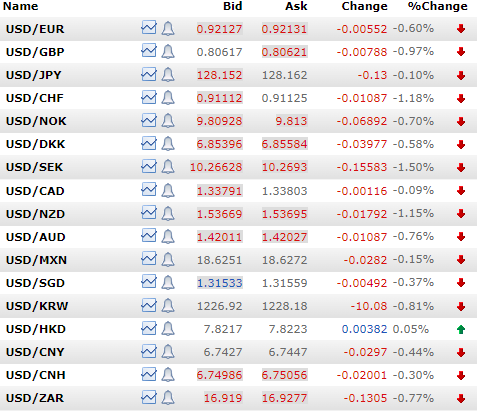 Above: Selected U.S. Dollar exchange rates. Source: Netdania. If you are looking to protect or boost your international payment budget you could consider securing today's rate for use in the future, or set an order for your ideal rate when it is achieved, more information can be found here.

The -0.5% decline in the overall index was larger than the -0.1% increase many economists were banking on and potentially portends lower inflation further down the line but much about the latter depends on large companies' ambitions in relation to profit margins.

"The surge in margins during the pandemic lagged the tightening of supply conditions, captured by the order backlog and supplier delivery measures in the regional Fed surveys, as shown in our chart," says Ian Shepherdson, chief economist at Pantheon Macroeconomics.

"Margins already are falling rapidly in the auto sector, where they rose more than anywhere else - though they nudged up a touch in December - but others will follow, dragging down all measures of both producer and consumer inflation," Shepherdson writes following a review of the data.

The downbeat data suggests the Federal Reserve (Fed) is having success in attempts to bring inflation back to its 2% target, attempts that were always predicated on the idea that all it could to reduce prices is to engineer an economic slowdown or outright recession.

All of this followed hours after the Office for National Statistics (ONS) said UK inflation had fallen from 10.7% to 10.5% in December but that core inflation held stubbornly at 6.3% due to accelerated price increases for some services.

Previously, other figures suggested pay growth for workers had accelerated again in the final quarter of last year while last week, GDP data indicated the economy has not deteriorated to the same extent envisaged in November's Bank of England (BoE) forecasts.

"The portion of sterling strength today which is independent of broader USD weakness defies logic. Fundamentally speaking, we think GBPUSD is a near-term sell in the vicinity of 1.24, but in this weak USD market we would be unlikely to commit much risk to that trade," says Stephen Gallo, European head of FX strategy at BMO Capital Markets.

"In terms of the fundamentals, we disagree with the notion that sticky inflation is good for a currency. Despite the slight moderation in the overall annual rate of inflation, the December ONS data were disappointing. Services inflation accelerated to a 6.8% YoY rate from 6.3% (fastest of the cycle thus far and since 1992 — Figure 2)," Gallo adds. 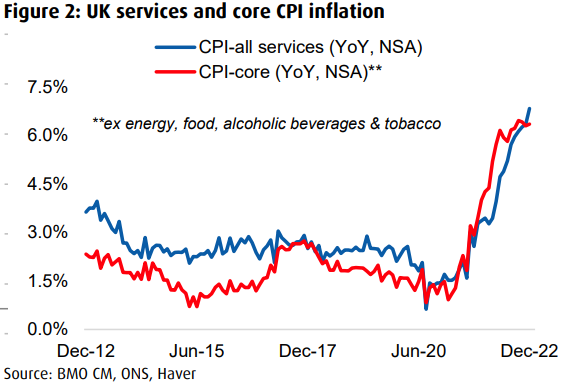