“The clock is ticking and as I mentioned the longer that inflation remains well above target, the greater the concern that the public will start to just naturally incorporate higher inflation into its economic decision making and our job is to make sure that doesn’t happen,” Fed Chairman Jerome Powell.

Europe's single currency fell more than one percent against the Dollar and was closing in on the parity threshold again on Tuesday, marking a more-than 50% reversal of the recovery that had began the prior Tuesday amid optimism in the market about the prospects of a decline in U.S. inflation.

Many other factors including Ukrainian success in rolling back an invading Russian army had helped to highs of almost 1.02 on Monday this week but that recovery unravelled on Tuesday in what is an indication that the market may be misunderstanding the outlook for U.S. interest rates and the U.S. Dollar.

"Inflation was softer than last month but above the expected level and we continue to note a broadening in the inflation pressures. More government spending is also not going to help to kill the inflation bug," says Neil Wilson, chief market analyst at Markets.com.

Core inflation rose sharply in  August while the overall measure fell less than was expected in an outcome that has left Fed in a bind and this is a central bank that was already, even before then, inclined to do too much and too soon with its interest rate rather than risk doing too little, too late. 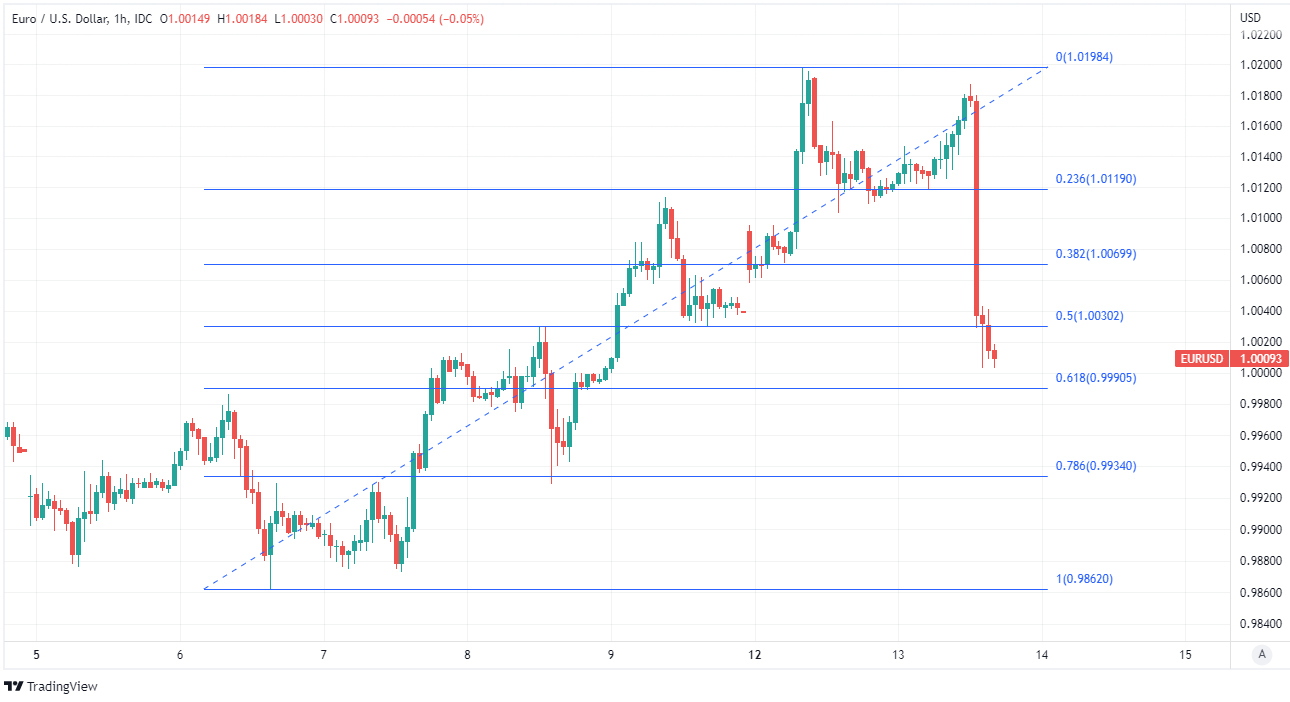 Above: Euro to Dollar rate shown at hourly intervals with Fibonacci retracements of early September rally indicating possible areas of technical support for the Euro.

"We'll admit that this data was far enough above our expectations to have at least some consequence for our Fed call. We were looking for a 75 bp point September move and a peak of 4%," says Katherine Judge, an economist at CIBC Capital Markets.

Fed officials have made abundantly clear in recent speeches that even if inflation had continued to fall in August, there would still be a risk of another large 0.75% increase in interest rates next Wednesday, although the latest data must surely mean there is now a risk of something much more significant.

“The clock is ticking and as I mentioned the longer that inflation remains well above target, the greater the concern that the public will start to just naturally incorporate higher inflation into its economic decision making and our job is to make sure that doesn’t happen,” Chairman Jerome Powell said last Thursday

“We believe that the public’s expectations of inflation will play an important role in the actual path of inflation. That is kind of the fundamental basis of our framework and as I just discussed, it is very important that inflation expectations remain well anchored,” he told told Peter Goettler at the Cato Institute’s 40th Annual Monetary Conference. 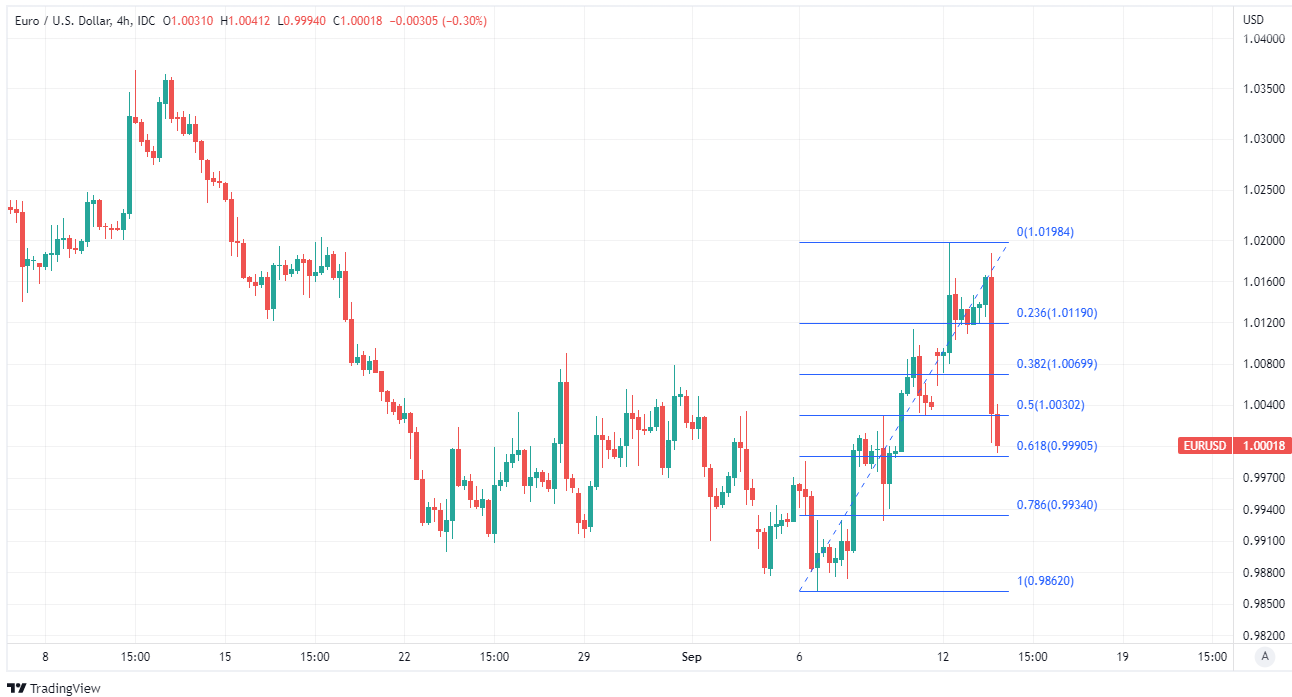 Above: Euro to Dollar rate shown at 4-hour intervals with Fibonacci retracements of early September rally indicating possible areas of technical support for the Euro.

All Fed policymakers have recently expressed concerns about increases in short-term inflation expectations, which risk lifting longer-term expectations and actual prices, and many have suggested that they may be losing patience when it comes to returning U.S. inflation to its 2% target.

Chairman Powell also cited last Friday for a second time in recent weeks the 1980s Fed Chairman Paul Volcker's approach to inflation as a model for dealing with the present price pressures, and this sentiment has since been echoed by Cleveland Fed President Loretta Mester.

For readers who're unfamiliar, Paul Volcker was the Fed Chairman who famously used brutally high borrowing costs to drive double-digit inflations rates out of the U.S. economy between 1979 and 1989, which was a volatile period for global financial markets as well as for the U.S. Dollar.

"Perhaps Paul Volcker said it best as he fought inflation in the 1980s: “…failure to carry through now in the fight on inflation will only make any subsequent effort more difficult, at much greater risk to the economy," she said in a Friday interview with MNI News. 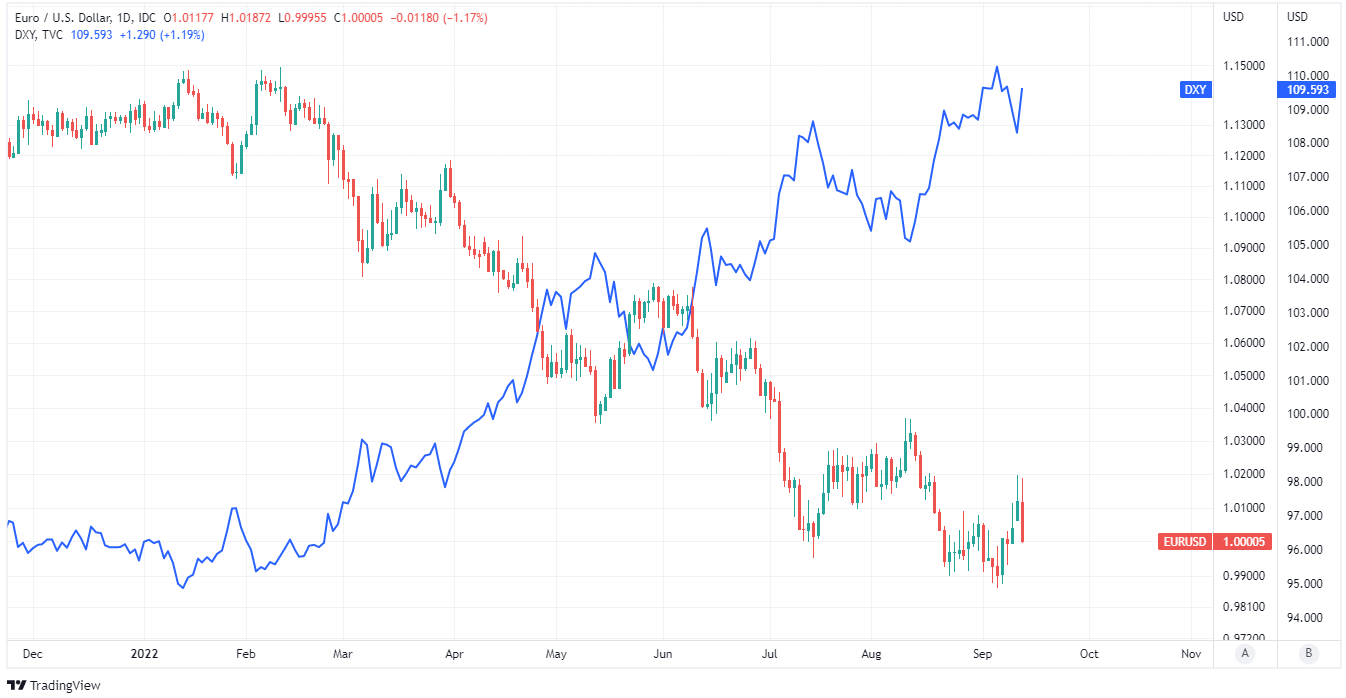 Above: Euro to Dollar rate shown at daily intervals with U.S. Dollar Index.

Mester also said that her preference at the time was to lift the Fed's interest rate "to somewhat above 4 percent by early next year and hold it there" and appeared to suggest that this steadier approach was contingent on the peak in U.S. inflation already having been seen before Tuesday.

"Until I see a meaningful and persistent moderation of the rise in core prices, I will support taking significant further steps to tighten monetary policy," governor of the Fed board Christopher Waller said last Friday.

All of this matters for the Euro because of what it could mean for September's interest rate decision and its potential impact on the U.S. stock and bond markets, which have already come under significant pressure this year and could be likely to recoil in horror at any particularly large rate step.

Only time could tell if the U.S. Dollar would be able to withstand the outflows that might materialise if the Federal Open Market Committee elects in favour of a Volckerian sized interest rate step next week, although there is surely a risk or chance that such a step would buckle the Dollar to the advantage of the Euro.