The Italy based lender and international investment bank says the Dollar will continue to remain firm over coming months but the Federal Reserve will have to start cutting rates again in 2023, which should mean its support starts to ebb away.

It is at this point that Euro-Dollar is tipped to make a foray back above 1.10.

"We expect more Fed tightening in 2H22, pushing US interest rates and long-term rates up further, and thus the USD will likely remain strong for most of the remainder of the year," says Roberto Mialich, FX Strategist at UniCredit in Milan.

The Dollar could see support start to fade around the turn of the year, once the Fed policy 'normalisation' ends in December says Mialich, referencing the potential ending of the current rate hiking cycle.

The call comes amidst rising expectations for a U.S. recession that would mean the Fed ultimately has to end its rate hiking cycle.

The Dollar has received substantial support over recent months as markets priced in a rapid series of interest rate hikes at the Federal Reserve in response to a strong economic recovery and surging inflation levels.

The Fed's decision this June to hike rates by 75 basis points highlights an eagerness to raise rates in the face of inflation which at 8.6% year-on-year in June is far above the Fed's mandated target at around 2.0%.

But the hike was widely anticipated by markets and the Dollar failed to push the Euro to fresh lows, indeed the European currency stabilised in the wake of the decision.

For the Euro-Dollar, 1.0350 now appears to be a firm floor with the daily chart showing two attempts to break below here, once in mid-May and again in mid-June. (Set your FX rate alert here).

This support suggests a significant pro-USD or EUR-negative impulse is now needed to break below here, and for now it remains unclear where it would come from. 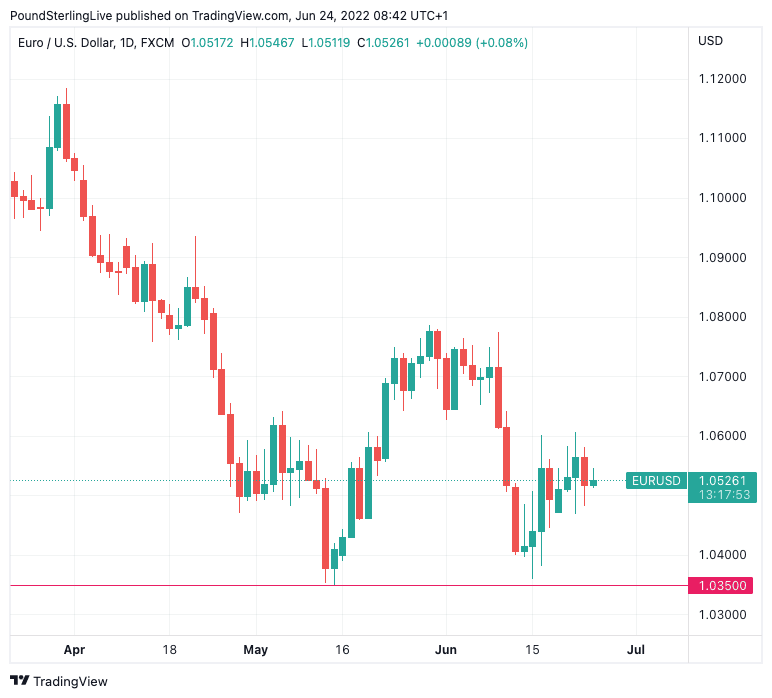 Above: Daily EUR/USD chart showing a stabilisation above 1.0350.

UniCredit raise their expectations for the number of rate hikes at the European Central Bank (ECB), now expecting 175bp of tightening to next March as opposed to their previous forecast of 100bp.

The ECB has already communicated it will raise interest rates in July and then again in September as it tries to control the Eurozone's inflation narrative.

This has been credited by analysts for the recent support the Euro has received.

UniCredit forecasts the ECB to raise its deposit rate to 1.25% in the first quarter of 2023 from where it will remain steady. 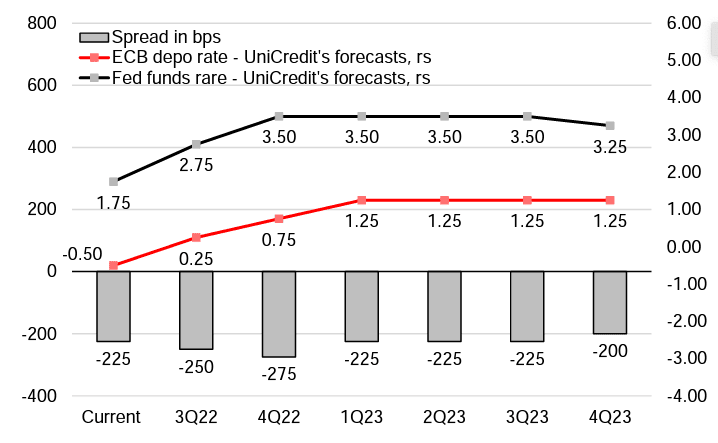 Above: "In our view, the spread between the ECB and Fed rates has to widen before getting tighter" - UniCredit.

This means that the differential between the policy rates will ultimately remain unsupportive of the Euro-Dollar through the remainder of this year but narrow in 2023, offering the exchange rate support.

UniCredit do not however expect the Euro-Dollar to fall to 1.0 but expect volatility rather than trends to prevail until around the middle of next year.

"The USD might lose more of its shine in late 2023, when we now expect the Fed to start cutting rates, which would help EURUSD regain the 1.12 area by 4Q23," says Mialich.