"2022 is likely to bring more of the most recent history. European institutions are conducting a EUR-negative policy in their fight against Covid-19, which will have negative ramifications beyond the Covid-19 crisis itself," says Chief Analyst Kristoffer Kjær Lomholt at Danske Bank.

The Euro has rebounded against the Dollar through late November and early December, hailing a relentless slide that has been in place since the 2021 high at 1.2350 was recorded on January 06.

Gains come as the region battles a Covid-19 surge, caused by the spread of the Delta variant.

More recently the outlook has darkened as the Omicron variant starts to spread, amidst concerns it is more virulent than its predecessor and evades some vaccination defences.

But the Euro initially rose and markets fell as investors grappled with news of the new variant; although many analysts had said this move was more a question of positions being cleared out of the market than any fundamental shift in fortunes for the Eurozone's single currency.

However, the recent late-year bounce is unlikely to sustain given a number of fundamental factors that remain aligned against the Euro to Dollar exchange rate say analysts at the Scandinavian lender.

The Euro's rally in 2020 - which came alongside a broader recovery in 'risk' assets - meant it became detached from fundamentals says Danske, and the decline of 2021 is said to be part of a necessary correction that can extend into the next year.

A hawkish Fed and desire for U.S. equities will be two notable drivers that will bring about another year of Dollar outperformance in 2022.

Danske Bank says what appears to have contributed heavily to "peak EUR" at the start of the year was a corresponding fading in peak credit supply in China, which in turn corresponded with a peak in upward global growth revisions.

"Since then, the surge in (commodity) prices has negatively affected Europe (import prices) and positively helped US (export prices)," says Lomholt. 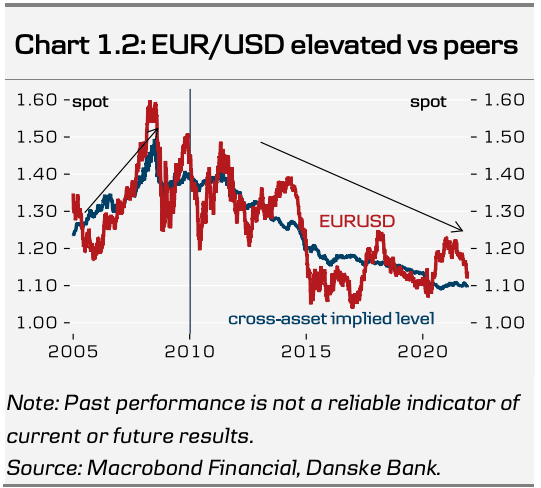 "We see more to come as liquidity tightens, global growth expectations increasingly peak, and the market sees more asymmetry between EUR and USD across factors such as economic dynamism," says Lomholt.

A risk to Danske's top trade for the coming year is a scenario where global yield curves steepen amid outperformance in European and Emerging Market equities alike, which "would probably also be consistent with upside risk in EUR/USD".

We reported last week that foreign exchange strategists at Credit Suisse are holding onto their view that the Euro will head lower against the Dollar, saying the Federal Reserve won't "bail out investor sentiment".

"The arrival of the Omicron variant poses a new threat to global growth and risky assets, and it's not surprising in that context to see both equity and rate volatility spike higher in the past week," says Shahab Jalinoos, Global Head of FX Strategy at Credit Suisse.

Federal Reserve Chair Jerome Powell said in testimony to U.S. lawmakers last week that he no longer saw inflation as being transitory and therefore the prospect of an accelerated 'taper' could be announced at the Fed's December meeting.

"Unfortunately for markets, Fed chair Powell's recent comments do not suggest he is now inclined to turn dovish again to bail out investor sentiment," says Jalinoos.

"Rather, the idea of an accelerated taper is being proposed instead, acting as a further signal for markets to sober up and take stock," he adds.

Credit Suisse were USD bulls against both EUR and JPY before Omicron emerged and in a new FX research and strategy note they maintain the idea of longer-term rates divergence in favour of the USD has not been eliminated yet, "despite the knee-jerk spread tightening that emerged once the news of the new variant hit the wires".

As such, "we retain our EURUSD 1.1150, even if it may now take longer to get to that level than seemed likely a week ago," says Jalinoos.