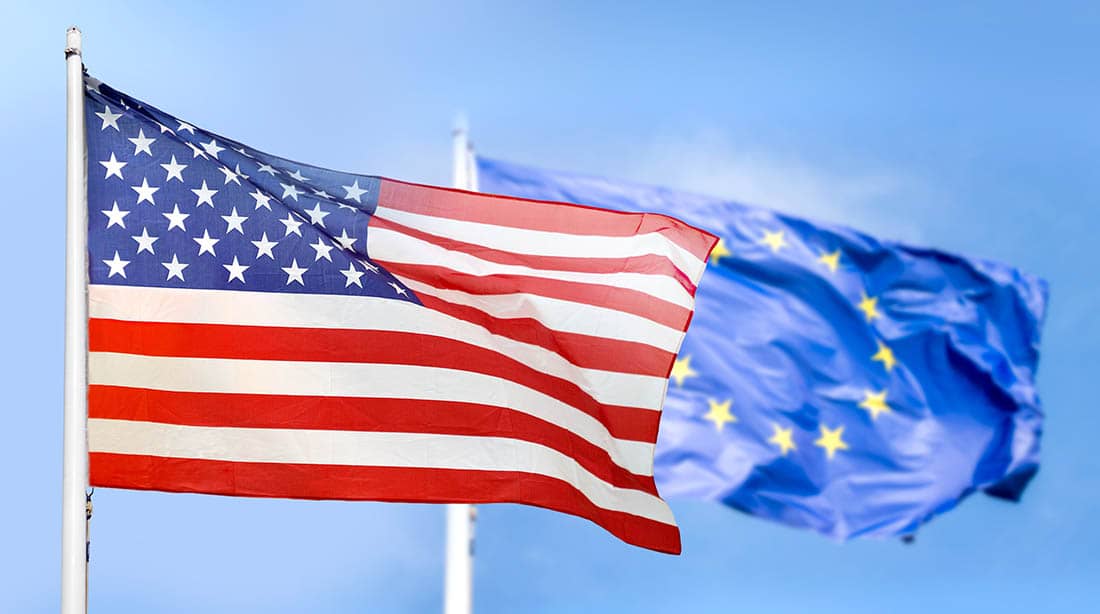 Stock markets have fallen in the wake of last weeks news that a more highly contagious variant of Covid-19 was spreading and that it might escape existing vaccines to some extent.

"The arrival of the Omicron variant poses a new threat to global growth and risky assets, and it's not surprising in that context to see both equity and rate volatility spike higher in the past week," says Shahab Jalinoos, Global Head of FX Strategy at Credit Suisse.

The Dollar also fell as investors bet the Federal Reserve would shy away from tightening monetary policy in 2022 in the face of the new threat.

The Euro to Dollar exchange rate rose from a floor around 1.12 to trade to trade as high as 1.1383, but it has since pared these gains to 1.13 which suggests the rebound might have little conviction. 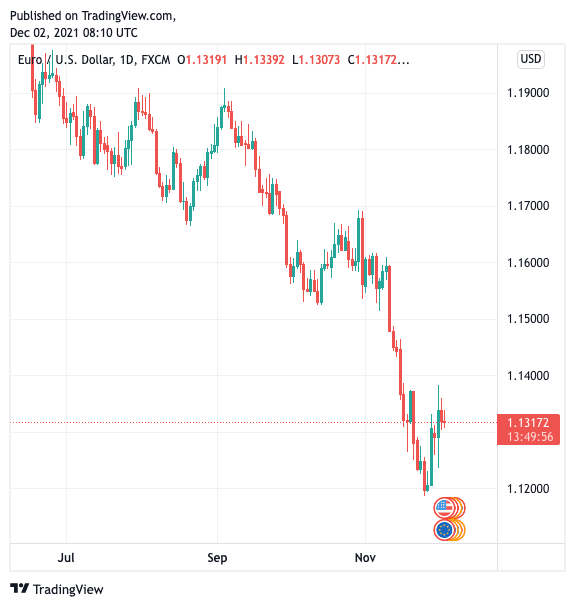 Federal Reserve Chair Jerome Powell said in testimony to U.S. lawmakers on Tuesday that he no longer saw inflation as being transitory and therefore the prospect of an accelerated 'taper' could be announced at the Fed's December meeting.

"Unfortunately for markets, Fed chair Powell's recent comments do not suggest he is now inclined to turn dovish again to bail out investor sentiment," says Jalinoos.

"Rather, the idea of an accelerated taper is being proposed instead, acting as a further signal for markets to sober up and take stock," he adds.

Credit Suisse were USD bulls against both EUR and JPY before Omicron emerged and in a new FX research and strategy note they maintain the idea of longer-term rates divergence in favour of the USD has not been eliminated yet, "despite the knee-jerk spread tightening that emerged once the news of the new variant hit the wires".

As such, "we retain our EURUSD 1.1150, even if it may now take longer to get to that level than seemed likely a week ago," says Jalinoos.

Powell told U.S. lawmakers Covid-19 outbreaks are inflationary and that it is time to "retire" the word transitory and that the Fed can consider ending QE bond buying "a few months" earlier.

"We now expect the Fed to increase the tapering pace from $15BN per month to $25BN so that the tapering is concluded in April," says Mikael Olai Milhøj, Chief Analyst at Danske Bank.

Danske Bank now expects three 25bp rate hikes in 2022 in June, September and December. By ending quantitative easing bond buying in April, the door is open for the first rate hike in May. They still expect four rate hikes in 2023. 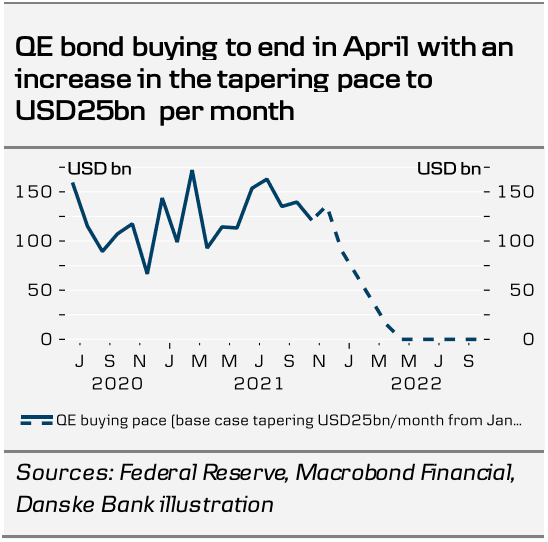 "Being long dollar will remain an integral part of that cross asset rotation. Thus, we recommend selling the rally in EUR/USD," says Lars Merklin," Senior Analyst at Danske.

Foreign exchange analysts at Commerzbank have lowered their Euro-Dollar exchange rate forecasts, saying the Federal Reserve will raise interest rates in 2022 in an environment of falling inflation.

This would imply materially higher U.S. 'real' yields relative to the Eurozone.

"The Fed should seem more hawkish next year than the market is currently assuming," says Ulrich Leuchtmann, Head of FX and Commodity Research at Commerzbank.

"We therefore consider the rate hikes we are expecting to be USD-positive and think that the dollar is likely to trend firmer next year," says Leuchtmann.