How the battle resolves itself could well determine how the year closes out for foreign exchange and whether the Euro extends a nascent rebound against the U.S. Dollar.

Strategists at HSBC say the price action in EUR/USD around Federal Reserve Chair Powell’s comments made before U.S. lawmakers on Tuesday "shows there is still a battle between RORO and rate differentials in the FX market."

The Dollar jumped after Powell said the Fed would consider accelerating the tapering of quantitative easing at the December policy meeting; a decision that hints interest rate hikes are sooner than the market might have anticipated.

"EUR-USD initially dropped on these headlines in a standard rate differential framework where a hawkish Fed is bullish for the USD," says Daragh Maher, Head of FX Strategy, U.S. at HSBC.

But stocks fell as investors feared the Fed was withdrawing the easy liquidity that has fuelled a boom in equities since the 2020 Covid market crisis, ensuring the Dollar's gains were quickly given back as the market bought Euros again.

"With equities dropping amid this potentially more challenging rates environment, the EUR rebounded in line with risk aversion, with the RORO model apparently taking over," says Maher.

The resultant candlestick looked to be a spinning top pattern, which is indicative of "indecision in the market". 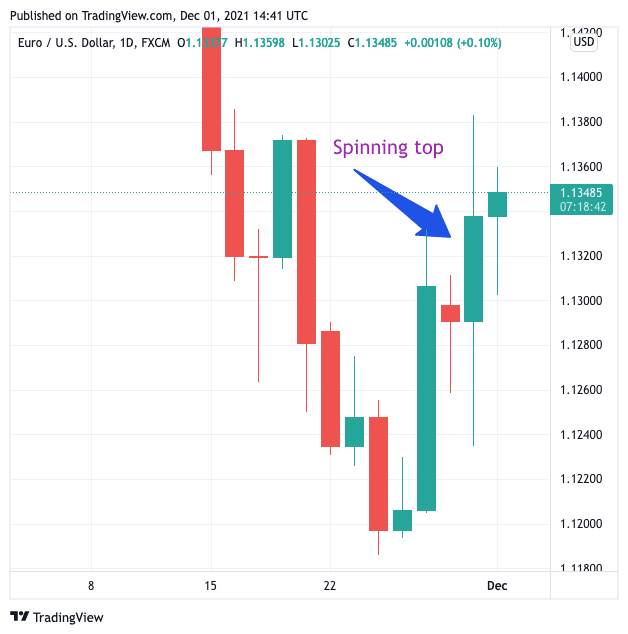 Recall, the Euro has been one of the winners in global FX since markets took fright at news of the Omicron variant, suggesting in the current time risk-off suits the single currency.

"This battle for the heart of FX between rates and RORO has been close run at times this year, but since the June FOMC it was clear that rate differentials had become more dominant," says Maher.

He suggests the apparent recent resurgence in RORO is simply a side-effect of a positioning clear-out that will therefore fade over time.

"Relative central bank policy is likely to be the key driver of FX and this still points to a gradual push higher in the USD into year end," says Maher.