The Euro-Dollar rate entered the new week within arm’s reach of 2021 lows and would risk establishing a new nadir for the year if this Wednesday’s Federal Reserve policy decision keeps the greenback on the offensive, or if global markets remain under pressure over the coming days.

Euro-Dollar received only short-lived respite from heavy selling late last week before misplaced speculation about the prospect of a 2023 interest rate rise was reportedly quashed by the European Central Bank, leaving the Euro at the mercy of a stronger Dollar and faltering global markets.

Dollar strength and widespread declines for stock and some commodity markets across the world saw the single currency clocking up one of its larger declines of the year for the five days to Monday when it entered the new week close to the round number of 1.17.

Should international markets stabilise early on this week then they could help the Euro back onto its feet while still above nearby support levels at 1.1714 and 1.1704, given the positive correlation between them, but it will also be one of the most sensitive to Wednesday’s Fed decision.

“Indeed, the Fed meeting is shaping up like there may be more of a hawkish risk to it,” says Mazen Issa, a senior FX strategist at TD Securities. “That makes the 1.1750 pivot in EURUSD vulnerable to breakage, and exposing the sub-1.17 lows.”

Wednesday’s decision is the highlight of the week for all currencies and the risk is that it sees the Fed moving further in the direction of tapering its quantitative easing programme while also offering up new forecasts that could act as fuel for the greenback’s recent rally. 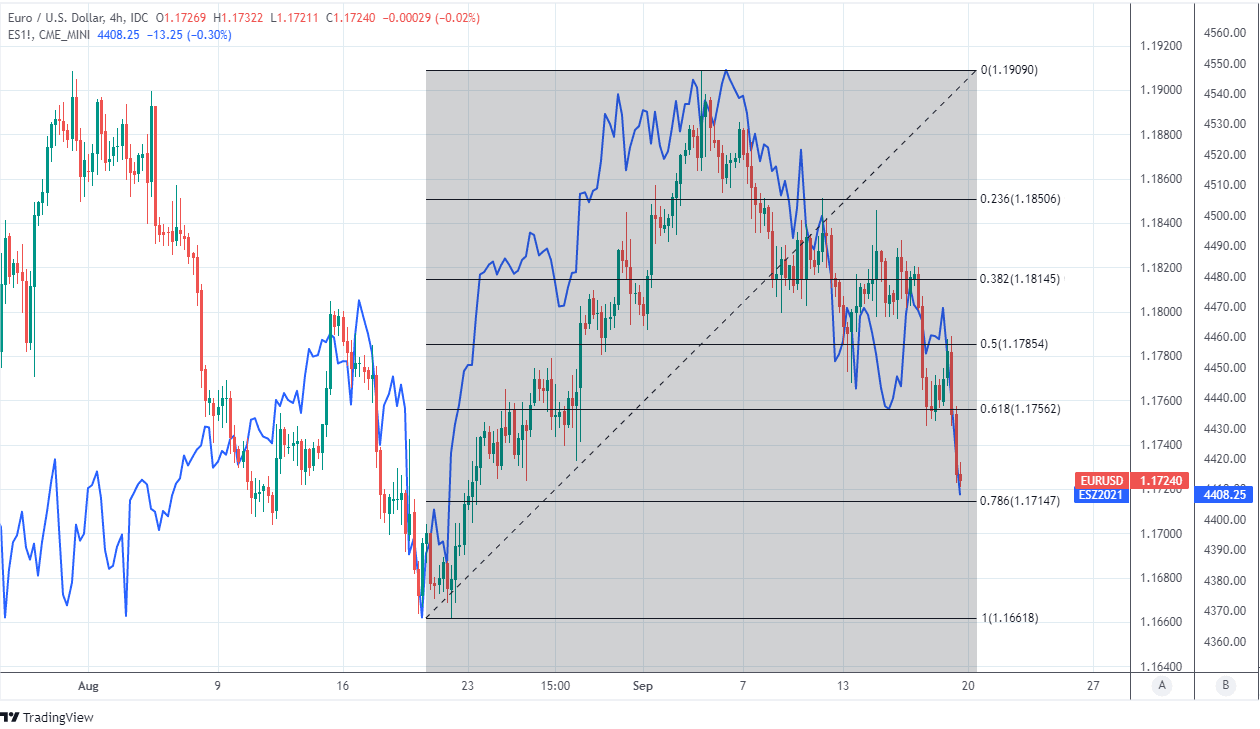 This would potentially undermine any Monday and Tuesday recovery by the Euro.

“Support at 1.1752 guards the 1.1704 March low and the 1.1664 August low,” says Karen Jones, head of technical analysis for currencies, commodities and bonds at Commerzbank. “A move above 1.1858 (resistance line) is needed to alleviate immediate downside pressure.”

The decision is out alongside new Federal Open Market Committee forecasts at 19:00 on Wednesday and is followed by a 19:30 press conference with Chairman Jerome Powell.

“We think bracing for EUR weakness is the safest play as the Fed may foresee a faster pace of rate hikes,” says Juan Manuel Herrera, a strategist at Scotiabank. “The currency has remained well-entrenched in a downward trajectory since early-Sep and only a breach above 1.1825/50 would suggest a reversal of the trend rather than losses extending to 1.17 (to possibly target the Aug 20 low of 1.1664).”

The forecasts will be doubly important this time out after the sudden shift in June and perhaps even more so than any comments on the likely time at which plans to wind down the Fed’s quantitative easing programme could be announced, which has been the market’s main focus of late.

June saw 10 of 18 policymakers indicate using their dot-plot of economic projections that they expected the Fed Funds rate range to rise on as many as two occasions and by a total of 0.5% before the end of 2023, while a minority of seven even saw a 2022 interest rate rise as likely to be necessary.

June’s interest rate forecasts drew a tentative line under more than a year of losses for the Dollar and exacerbated Euro-Dollar’s 2021 fall, although since then U.S. labour market and economic recoveries have continued while inflation readings have been higher than the Fed had anticipated.

This gives rise to the possibility that some policymakers see a greater need this month for more rate rises in future than they did previously in June, which could be problematic for the Euro given that the ECB is not expected to raise interest rates at all until at least 2024. 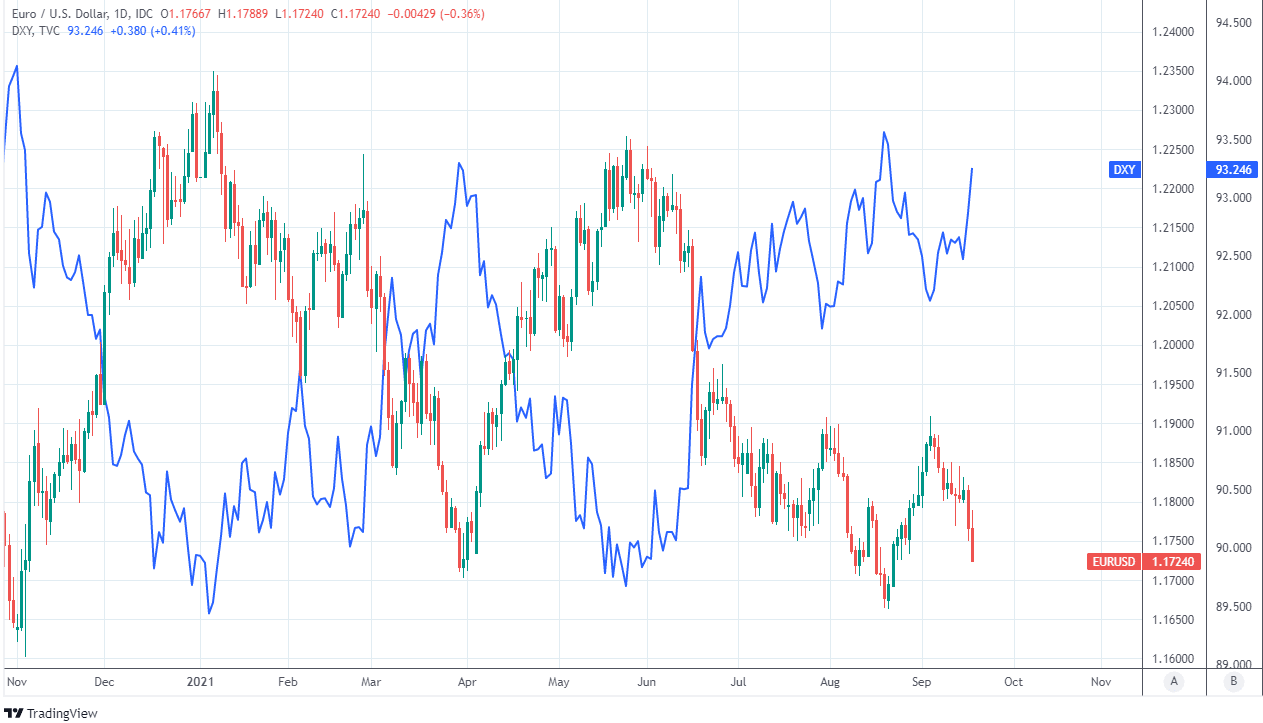 “We worry that the overall market impact from the policy meetings would be a blow to risk sentiment, especially if the Fed departs from its usual ‘patient’ message on QE taper and this gives the high-yielding safe haven USD a boost,” says Valentin Marinov, head of FX strategy at Credit Agricole.

“Investors could further fret about the prospects for tighter global financial conditions at a time when the global recovery is coming off the boil. Next week’s global PMIs and the German ifo could add to such concerns," he adds.

Wednesday’s policy decision is set to be followed closely on Thursday morning by Flash IHS Markit PMI surveys for the month of September that will be scrutinised keenly by the market for clues about the likely pace of growth in the final stretch of the third quarter.

“The PMIs next week will look solid in Europe due to service sector reopening effects but that is likely also going to be the 'peak' of the Euroboom narrative. At least we don’t buy it with one single penny as Germany lags China by a bit more than a quarter and China is clearly slowing,” says Andreas Steno Larsen, chief FX strategist at Nordea Markets.

The Eurozone grew robustly in the second quarter and many economists expect that expansion to have continued apace in the third.

Economists are however increasingly mindful of the risk that Europe’s recovery is held up later this year by disruption to corporate supply chains stemming from coronavirus containment attempts in mainly Asian economies, as well as the slowdown in China.

Thursday’s IHS PMI surveys covering the manufacturing and services sectors are a prospective source of insight into the extent that these factors were felt in the aforementioned sectors in September, and are due for release between 08:15 and 10:00 London time. 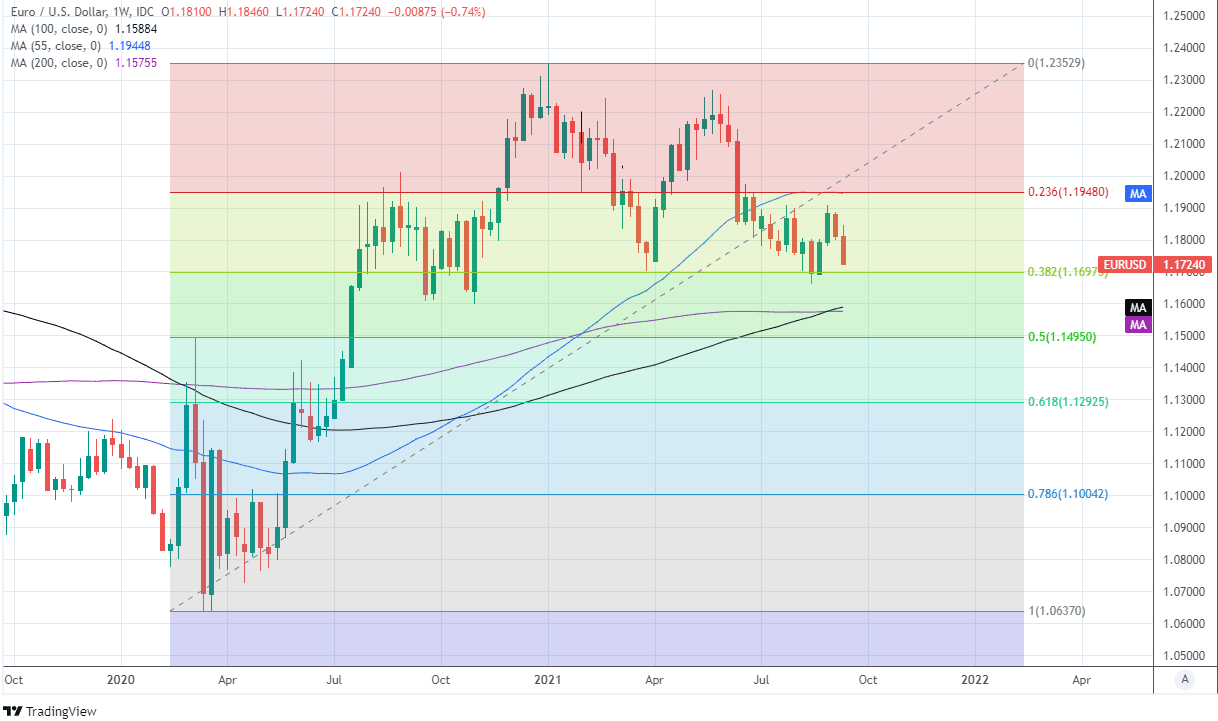 Above: Euro-Dollar rate shown at weekly intervals with Fibonacci retracements of 2020 recovery indicating possible areas of support, alongside major moving-averages.