The Euro-to-Dollar exchange rate starts the new week softer however we are told by one noted analyst that the pair is likely to remain supported heading into this week's key event: Thursday's European Central Bank (ECB) policy announcement.

"With speculation over ECB tapering likely to keep EUR/USD bid on dips into Thursday, we favour the dollar staying slightly offered through the early part of the week," says Chris Turner, Global Head of Markets and Regional Head of Research for UK & CEE at ING Bank.

The call comes at the start of a new week that sees the Dollar recovering against the Euro and other major currencies as the market pares some of the declines witnessed the previous Friday in the wake of the U.S. jobs report.

"Friday's soft US jobs report is now favouring a dovish taper from the Fed and has drawn some of the sting out of upside scenarios for the dollar," says Turner. 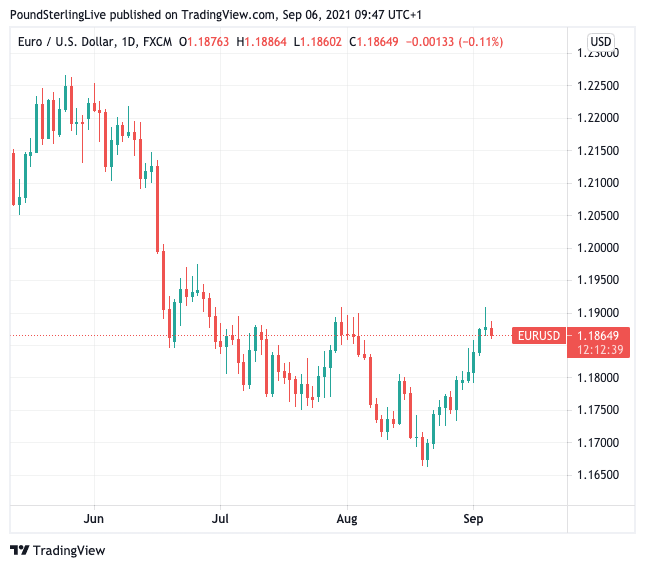 The EUR/USD exchange rate is quoted at 1.1865 at the time of publication, having been as high as 1.1990 in the aftermath of the U.S. jobs report release.

The recovery to these levels from the August 20 low of 1.1664 represents a short-term trend of appreciation for the pair that might yet extend further over coming days.

"The rally of the dollar lost momentum when it approached important support level in EUR/USD (1.17) and GBP/USD (1.36). Because the momentum was not strong enough to force a break, profit taking on long dollar positions was the result," says Georgette Boele, Senior FX Strategist at ABN AMRO.

The Dollar is tipped by analysts to remain the primary driver of foreign exchange movements amidst speculation regarding when the Fed will, 1) commence winding down quantitative easing and then, 2) start raising rates.

But, central bank policy focus now turns to the ECB who could reveal clues as to their own intentions on potentially winding down at least some part of their quantitative easing programme.

"Expect EUR/USD to remain bid through the early part of the week as the market adjusts positions ahead of Thursday's ECB meeting," says Valentin Marinov, Head of G10 FX Strategy at Crédit Agricole.

The market expects the ECB to lag both the Bank of England and U.S. Federal Reserve in ending quantitative easing and then raising interest rates.

This assumption has lead many analysts to maintain a relatively cautious stance on the Euro's outlook against the Pound and Dollar.

But should the ECB strike a relatively optimistic tone on the Eurozone economic outlook, and suggest it is ready to begin closing down PEPP, the Euro could benefit. (PEPP: Pandemic Emergency Purchase Programme, more on this here).

The Eurozone economy continues to recover and inflation rise amidst falling levels of Covid-19 and associated restrictions, which represents a positive shift in fortunes for the Eurozone economy which has lagged that of the U.S. for much of 2021.

With the U.S. economy seeing rising infections and waning economic momentum, the Dollar has understandably relinquished some value to the Euro.

(1) the ongoing debate at the ECB Governing Council about the need to cut stimulus in view of the Eurozone recovery;
(2) the intensifying inflation overshoot; and
(3) favourable financial conditions.

"In particular, evidence that ECB Governing Council members agreed to ‘taper’ its PEPP programme but deferred any decision to extend QE purchases beyond Q122 in part because of the improving ECB economic outlook could boost EGB yields and help the EUR regain more ground vs low yielders like the JPY and the CHF," says Marinov.

However some analysts are of the view that ECB President Christine Lagarde and her fellow board members could yet push back against the notion that the economy requires a reduction in support.

Such a move would likely be build around a view that current hot inflation levels will prove temporary and therefore fall back to below 2.0% ever the medium-term.

Recall, the ECB has now readjusted its mandate to accommodate inflation above 2.0%, whereas before it was judged necessary to tighten policy when inflation was looking set to hit 2.0%.

Any caution regarding the economic outlook combined with an unambiguous message that it is too early to consider ending PEPP could pose significant headwinds to the Euro.

Indeed Crédit Agricole have released new research saying they remain constructive on the Dollar's outlook, saying they do not see any easy gains for the Euro in the near-term.

"EUR/USD could continue to struggle in the near term on the back of relative economic and central bank policy divergence," says Marinov.

But the medium-term term prospects (i.e. a multi-month timeframe) for the EUR/USD are held to be more constructive.

"We maintain our constructive medium-term outlook for the pair as we expect the EUR to be supported by equity and fixed income portfolio flows as well as buying by Eurozone corporates and EM central banks. We thus still see EUR/USD at 1.20 in Q421 and 1.24 in Q422," says Marinov.