The Euro-Dollar rate was holding above 1.20 on Tuesday after a strong start to the week but has been tipped as a buy at Goldman Sachs and forecast to reach pandemic era highs of 1.25 over the next three months.

Europe’s single currency was already up strongly in April when on Monday it climbed back above 1.20 for the first time since February and the middle of its first-quarter correction, with gains coming amid a widespread U.S. Dollar downturn and indications or green shoots of improving investor sentiment toward Europe itself.

The Euro-Dollar rate has been lifted thanks to better-than-expected economic data, improving coronavirus infection trends and burgeoning hopes of a pick-up in the pace of vaccinations in the EU.

The Euro was trading comfortably above 1.20 Tuesday and although it must still navigate Thursday’s policy decision from the European Central Bank (ECB) its prospects are increasingly bullish according to the latest forecasts from Goldman Sachs.

“Our Europe Economics team expects the ECB to slow the pace of PEPP purchases after its June meeting. Meanwhile, recent stability in US rates despite firm growth and inflation data may indicate that market pricing of the funds rate path has reached a local maximum,” says Zach Pandl, co-head of global foreign exchange strategy at Goldman Sachs.

Goldman Sachs’ research team advocated this week that clients buy the Euro-Dollar rate and look for a rally to 1.25 in relatively short order, while indicating that they do not expect it to get back to or below 1.175.

The 1.25 level coincides with the bank’s new three-month forecast, which has been upgraded from 1.21, although this is just the first step in a recovery that is seen lifting the Euro to 1.27 at the six-month horizon and 1.28 before early 2022.

A rally to 1.25 would see the single currency trading at its highest since 2018 while the 1.28 level has not been quoted since before the ECB announced its first quantitative easing programme in January 2015.

“We think the combination of rising Euro Area growth expectations, solid equity returns for the region, initial normalisation signals from the ECB, and more stable Fed pricing will extend the recent turn higher in the Euro,” Pandl and colleagues wrote in a research note.

Europe’s single currency saw multi-year highs around 1.2350 in January this year before slipping through the first quarter seemingly in response to a range of factors including ECB fears of what currency strength might mean for attainment of its inflation target and rising optimism about U.S. economic prospects.

Currency traders wagered increasingly against the Euro and in favour of the Dollar as the full extent of Europe’s challenges in making coronavirus vaccinations available became clear, leading to fears the bloc would fall behind in a pending global economic recovery.

But the pace of vaccinations has increased already in recent weeks and is expected to rise further this summer, while some surveys measuring private sector sentiment have indicated a growing resilience of the economy to coronavirus containment measures like ‘lockdown’.

This has seen investors taking profits on earlier wagers against the Euro in April, which were expressed initially by sales of EUR/GBP, EUR/CAD, EUR/AUD and others in the first quarter. 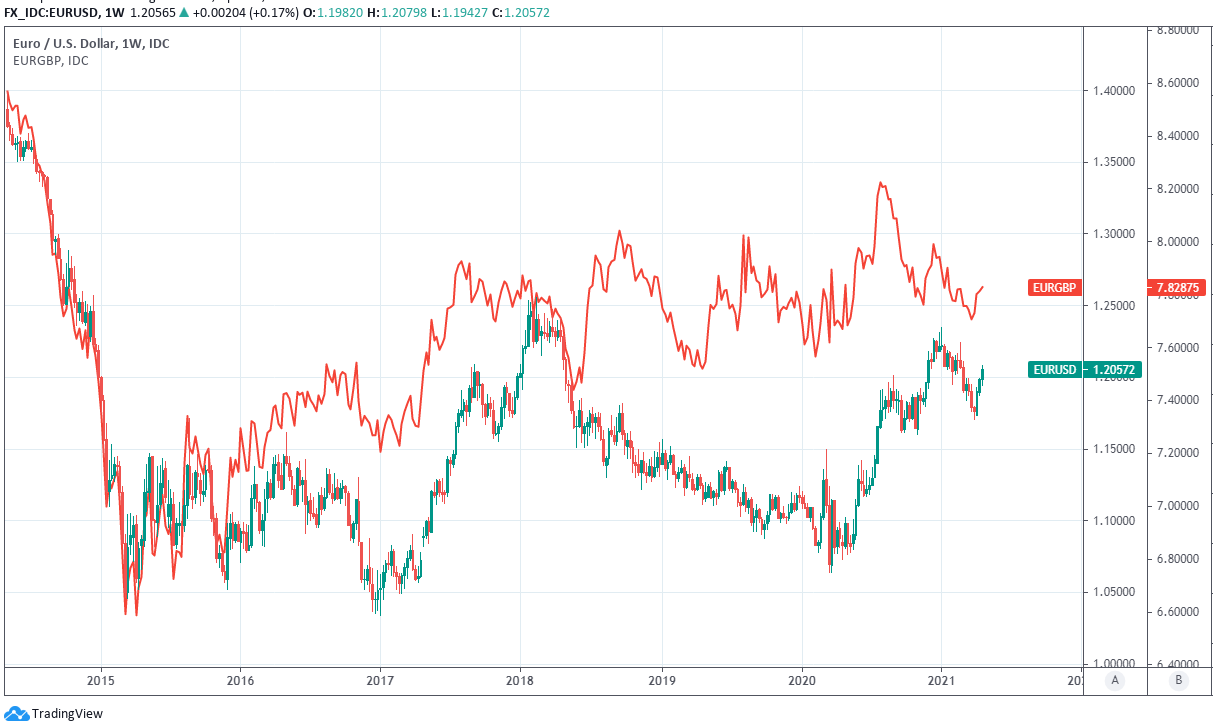 Above: Euro-Dollar shown at weekly intervals with Euro-Sterling in red.

Profit-taking has prompted rallies in many European exchange rates, though some analysts say it may be premature for the Euro to appreciate.

"Part of the overall issue could be the EUR's liquidity profile, and intermittent selling of USDs accumulated by central banks through intervention. This is not the type of EURUSD flow an FX investor would want to fully stand in the way of. But it is at odds with the signals coming from the [balance of payments] and the macro backdrop," says Stephen Gallo, European head of FX strategy at BMO Capital Markets.

It’s noteworthy that while EUR/USD has risen, so too have other European currencies including Pound Sterling, prompting other Euro rates to decline and restraining the increase in the overall trade-weighted singe currency.

EUR/GBP, which is the third largest component of the overall trade-weighted Euro, fell by almost a full percent at the opening of this week as the Euro-Dollar rate crossed 1.20, while other important exchange rates like EUR/SEK and EUR/PLN also fell.

The latter two exchange rates account for 10% of the overall and trade-weighted Euro exchange rate, which remained -1.2% below its late December high on Tuesday, while Sterling accounts for up to 15%.

Above: Euro-Dollar shown at weekly intervals with Euro-Renminbi in red.

The nominal effective Euro exchange rate compiled by the ECB had fallen by around 2% in the three months to April, aided by strength in Sterling and the Renminbi.

China’s Renminbi is almost as large a part of the trade-weighted Euro as the U.S. Dollar, but has strengthened against all of its most important trade-partner currencies for a six month period which broke with the trend seen through much of 2020.

“External factors for China’s currency, the yuan, to appreciate” according to a Reuters report covering remarks made by Xuan Changneng, deputy administrator of the State Administration of Foreign Exchange (SAFE) at the Boao Forum on Monday.

Above: Renminbi relative to CFETS basket. Turning lower in April after reaching multi-year highs in 2021.

Previously the Renminbi had alternated each quarter between gains and losses over other currencies included in the China Foreign Exchange Trade System (CFETS) index basket, though there was a hint on Monday that this six month appreciation may be ending and a period of depreciation within already established parameters may now be looming.

SAFE manages China’s foreign exchange reserves, which are the largest in the world and would be the primary influence for implementing the country’s foreign exchange policy, which is to keep the Renminbi "basically stable at an adaptive equilibrium level."

A cooling off period for the Renminbi would be a bullish development for EUR/USD as the latter is one of only two market channels through which the Euro-Renminbi rate can be influenced.