The Euro-to-Dollar exchange rate entered the new week with the 1.20 level and above in its crosshairs, although could be set to cool its heels ahead of Thursday’s European Central Bank (ECB) monetary policy decision.

Ahead of the ECB, the single currency's is registering its longest stretch of unbroken gains thus far in 2021.

Europe’s unified unit opened the new week within inches of 1.20, which is often described as a “psychologically significant” threshold, having climbed above a cluster of moving-averages and other technical resistances to notch up a second consecutive weekly advance. 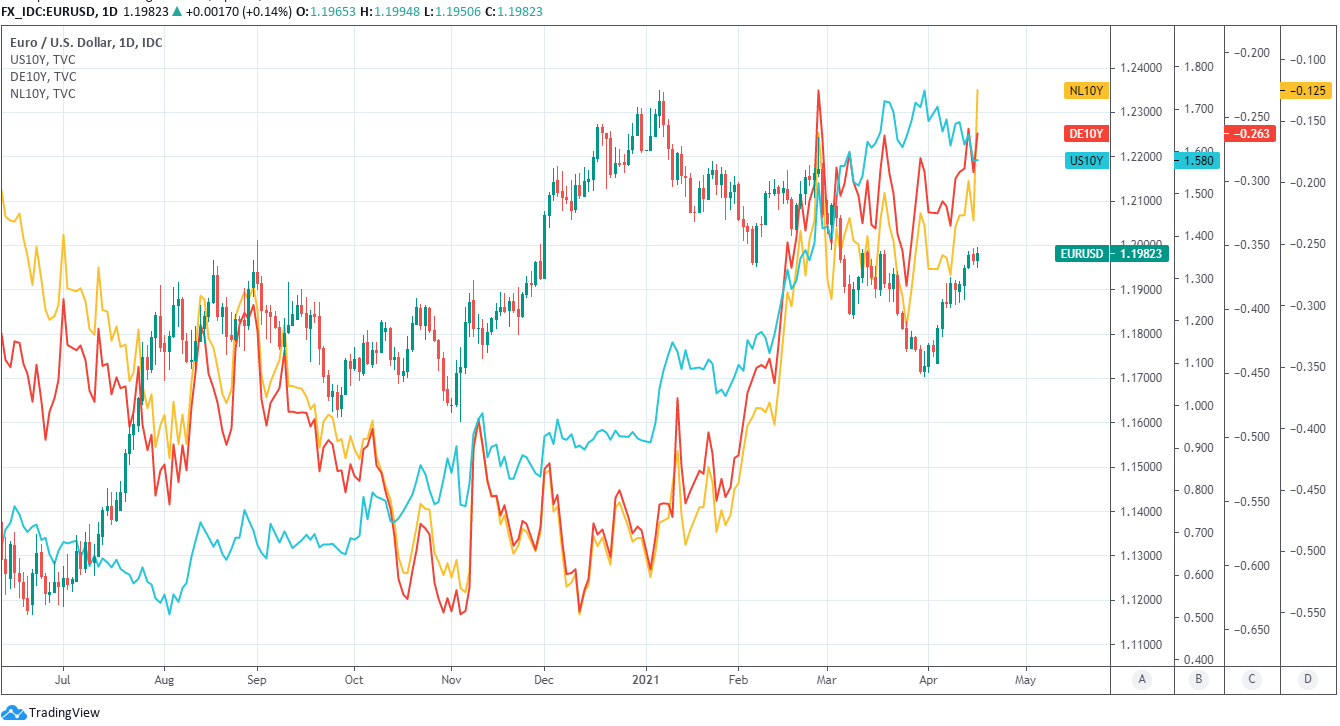 “There are various fundamental factors behind the firmer tone in the currency pair stemming from both the Eurozone and US. Technicals suggest that a break above the 1.20 level could trigger a move back to 1.22 and a rally could conceivably happen fairly quickly assuming stops above 1.20 are triggered,” says Jane Foley, head of FX strategy at Rabobank.

Included among the European drivers of the rally, cited by various observers, are improving coronavirus infection and hospitalisation trends as well as a step-up in the pace of vaccinations.

In addition, IHS Markit PMI surveys of the services and manufacturing sectors have painted the Eurozone as holding up better through 2021’s coronavirus containment than the ECB anticipated.

Also some U.S. bond yields have declined in April, potentially lessening the allure of a Dollar that has fallen broadly this month and was the worst performing major currency last week.

“Although we remain positive on the USD for the rest of the year, the short-term risks are for further weakness. We are reminded of the sell-off that pushed EURUSD to 1.235 in the first week of January. Our investor flows have turned once again negative for the USD, particularly in the case of real money,” says Athanasios Vamvakidis, head of FX strategy at BofA Global Research.

Meanwhile, some European bond yields have risen notably and even as U.S. counterparts have declined, potentially repairing the Euro’s appeal to investors.

The gap between German and U.S. yields improving by 16 basis points in favour of Europe’s largest economy while the same measure for the Netherlands has risen even further.

But rising bond yields and exchange rates can tighten financial conditions, which is exactly what the ECB was seeking to guard against when the Bank said in March it would carry out weekly purchases under its €1.85 trillion Pandemic Emergency Purchase Programme (PEPP) of a "significantly higher" amount this quarter.

It remains to be seen what the ECB’s Governing Council makes of all the relevant developments and their impact on the Eurozone’s economic and inflation outlooks.

Uncertainty about this is just one reason why the Euro could struggle to sustain new highs this week ahead of Thursday’s decision and press conference.

Should the ECB overlook higher ‘frugal country’ yields, all while interpreting the improved trends in infections, vaccinations and recent indications of economic resilience as having lessened the risks to its inflation outlook, then Thursday’s update may turn out to be supportive of the Euro-Dollar rate.

This would in turn give EUR/USD a shot at rising above 1.20, but it may also need to overcome the 50% Fibonacci retracement of its January fall, sited at 1.2030, to sustain the move.

“Our team sees the ECB doing its best to avoid being dragged into explaining its reaction function in Eurozone debt markets. And with little downside seen for European rates, one could argue that the EUR downside is limited too,” says Chris Turner, global head of markets and regional head of research at ING, who tips a 1.1880-to-1.21 range for the Euro this week. 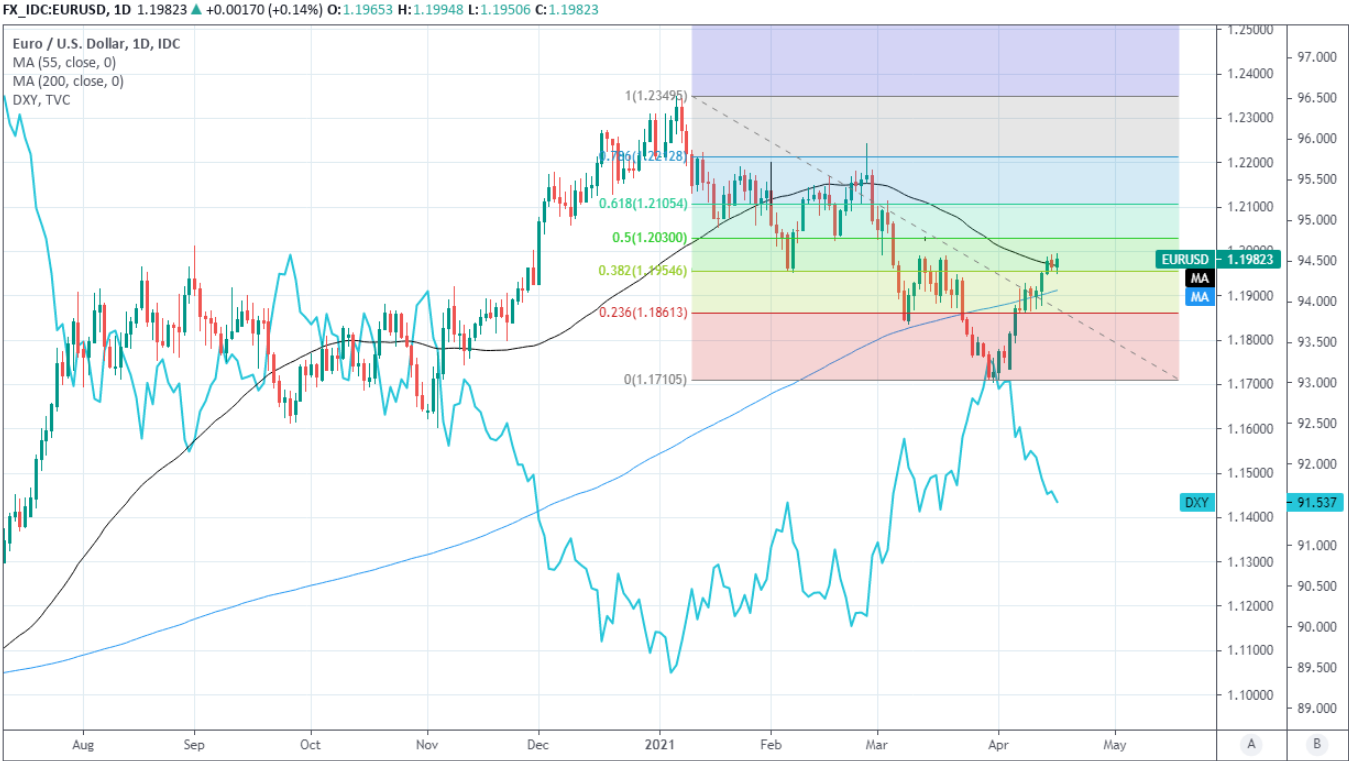 Member the ECB’s Governing Council of decision makers have however proffered differing views on the degree to which yields need be of concern and the likely necessary duration of the PEPP programme of late.

Notably Luis de Guindos said on April 13 the ECB should take action in relation to any “unwarranted rise” in borrowing costs and argued that providing too much support to Europe’s economies should be preferable to providing too little.

Francois Villeroy said on the same date that weekly PEPP purchases shouldn’t be reduced until March 2022 at the earliest.

Previously Klaas Knot had also suggested on April 08 that the bank should seek to extinguish any “unwarranted rise” in borrowing costs but also at the same time suggested the ECB could potentially end its PEPP programme as soon as the third quarter of this year.

"As Schnabel has pointed to, the ECB should become more tolerant to higher long-end yields as the recovery takes hold this summer," says Mikael Sarwe, head of Sweden strategy at Nordea Markets.

Rising Eurozone bond yields have not yet been seen in the highly indebted Mediterranean country bond markets, which may be due to the ECB’s purchases having been targeted at countries and markets which are the most vulnerable to investors’ demands for higher interest rates.

Bond price declines and resulting increases in yields have been confined to those countries and markets where indebtedness is lower and national balance sheets are healthier.

So far the ECB’s PEPP purchases have not been increased to the “significant” extent that was telegraphed, the bank’s weekly disclosures show, although various analysts and economists have said that calmer conditions in Eurozone financial markets most likely explain this.

“Although the increase in the weekly purchase pace has been at the lower end of expectations, financing conditions have remained favourable,” says Sven Jari Stehn, chief European economist at Goldman Sachs.

"Given the prospects of a significant upward revision to the staff growth projections at the June meeting, we look for the PEPP purchases to slow down again from Q3," he adds.

The ECB will announce its April policy decisions at 12:45 London time Thursday before President Christine Lagarde leads a 13:30 press conference, with both forming the highlight of Europe’s calendar this week.

Consensus looks for rates charged or paid on main refinancing operations, the marginal lending facility and bank's deposit facility have been left unchanged at 0.00%, 0.25% and -0.50% respectively, with analysts anticipating that the overall €1.85 trillion size of the PEPP programme will also be left unchanged. 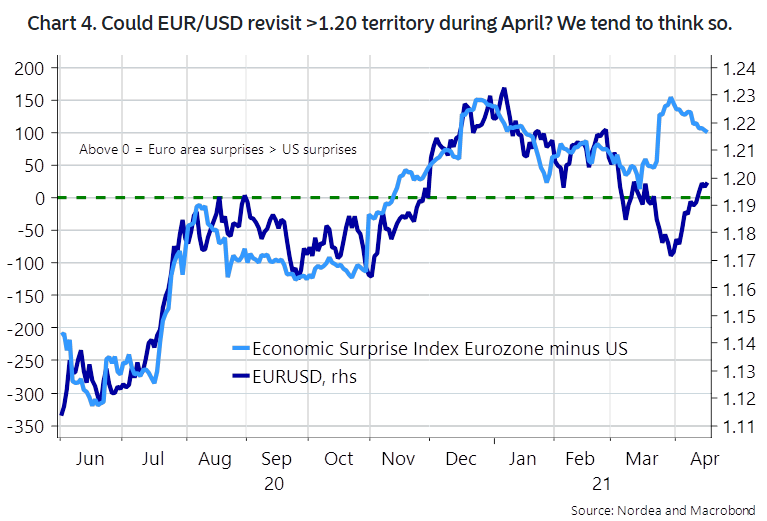 This supplements the ECB’s earlier and ongoing Asset Purchase Programme, which buys €20BN per month of European government bonds and is also expected to be unchanged.

This latter programme is far smaller than the PEPP operation, which has seen the bank bought

The decision is followed between the hours of 08:15 and 10:00 on Friday by IHS Markit Flash PMI surveys, which will reveal whether the March indications of resilience in Europe’s manufacturing and services sectors endured into the current month.

“The Euro area surprise index is still super elevated, which caught us a bit by surprise when we checked it over the weekend (being surprised by a surprise index is kind of meta isn’t it?). Judging from relative economic surprises, EUR/USD could still look fair above 1.20 through April, but the scope for positive surprises vs. the USD is probably bigger elsewhere,” says Andreas Steno Larsen, chief FX strategist at Nordea Markets.