On the Euro the ECB said only that it'll "continue to monitor developments in the exchange rate with regard to their possible implications for the medium-term inflation outlook," before reminding that it will "stand ready to adjust all of our instruments, as appropriate, to ensure that inflation moves towards our aim."

Few had expected any more than that when it comes to the Euro, increases of which have threatened to reduce import costs and undermine the bank's delivery of its inflation target of "close to, but below 2%," although currency concerns are exactly why the sole change to the ECB's statement was curious. 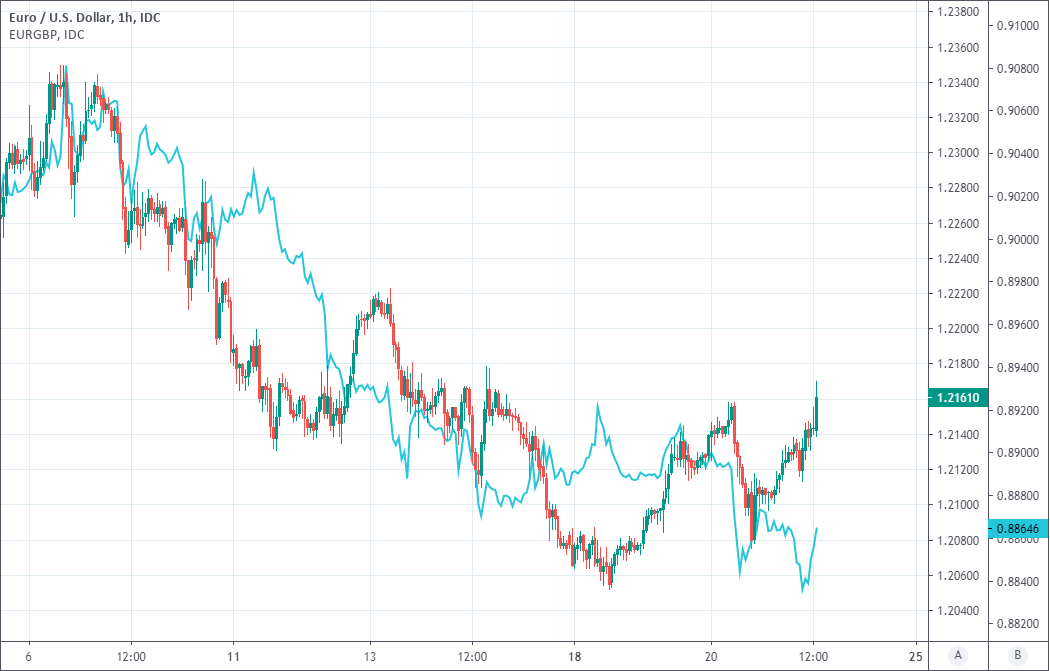 Above: Euro-to-Dollar rate shown at hourly intervals alongside EUR/GBP (blue).

The ECB told markets that its €1.85 trillion coronavirus-inspired quantitative easing programme might not even need to run its full course, right before President Christine Lagarde warned from a digital stage that  "the intensification of the pandemic poses some downside risks to the short-term economic outlook," and that "its implications for economic and financial conditions continue to be sources of downside risk" for inflation.

"This is a slight hawkish tilt in the communication, and also one which could become a target for markets. After all, the ECB is now saying that if yields remain as low as they are now, there isn’t a reason to deploy the PEPP in full. We wouldn’t put it past markets to test the central bank on this," says Claus Vistesen, chief Eurozone economist at Pantheon Macroeconomics. "In a survey conducted by Bloomberg ahead of today’s meeting, 40% of the sample predicts that the central bank will not spend the full amount."

A growing minority of economists suspect the ECB will not use all the monies allocated to keeping financing costs low for Eurozone governments as they grapple with a pandemic that has returned many of the continent's economies to at least some form of 'lockdown' in recent months. However, there isn't yet a majority in favour of the idea and nor were there any obvious reasons for Thursday's statement change beyond the political.

"Markets were expecting the ECB to strike a more dovish tone, recognising the difficulties of balancing the vaccine rollout with a surge in new cases," says Hinesh Patel, a portfolio manager at Quilter Investors. “The ECB does appear slightly disconnected from reality as while vaccines are being deployed, it is going to be some time until the continent achieves any sort of level of immunity that allows the unwinding of the various lockdowns. Not only that but having to contend with various levels of scepticism around the vaccine from different populations throws an additional spanner in the works." 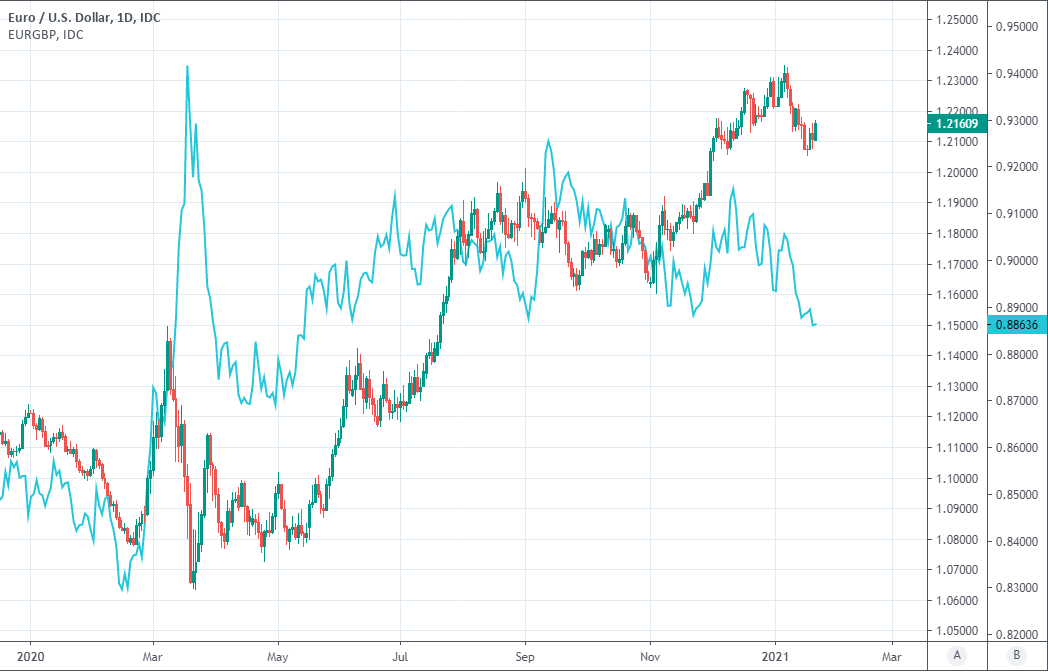 Above: Euro-to-Dollar rate shown at daily intervals alongside EUR/GBP (blue).

Thursday's statement change wouldn't be the first instance where the ECB has appeared keen to adapt its policy stance for reasons related to the politics of Eurozone members, some of whom will hold elections this year. Dutch and German voters are expected to return to the ballot box in March and September respectively, while some of them have long seen the ECB's policies as a form of allegedly-unlawful state financing that comes mostly at their own expense.

"You could argue it’s a slight sop to the hawks as it means they could reduce the PEPP envelope – or not use if fully – but really this is not a material change," says Neil Wilson, chief market analyst at Markets.com. "As ever, though, small hints from central banks can be latched on by particular market participants as a sign of something bigger to come. The euro likes it."

Since the last time Germans and Dutch went to the polls the ECB has increased its ever-incendiary footprint in the Eurozone bond market significantly, such that its ownership of it has risen from a 17.5% share to nearly 30% of the available supply. However, it had not only hinted at plans to taper off the controversial programme ahead of Germany's 2017 election; minutes of its latest meeting had also confirmed that it was in fact planning to end it that year.

The ECB did later but ill-fatedly end its original asset purchase programme in December 2018 before being forced in September 2019 to resume bond purchases due to subpar growth and ebbing inflation. No such option exists this year, given the pandemic and damage done by the ongoing 'lockdown,' although that doesn't mean the bank wouldn't want to indicate for political reasons that a definitive end to it is still likely, however far into future.

Both the Netherlands and Germany have small but meaningful contingents of eurosceptic parties whose election prospects are unknown.

"Unity will likely falter while dissent will grow within the Governing Council once the economy has started to rebound in spring," says Florian Hense, an economist at Berenberg. "If the economy recovers from spring onwards and inflation expectations rise notably, the ECB will be under pressure to raise its asset purchases to contain the rise in nominal bond yields. Some Governing Council members will likely welcome this, others may question the logic of such a step amid a recovery in economic activity and inflation (expectations). Still, we expect a majority of Governing Council members to stay the course – with very supportive monetary policy probably until the labour market has recovered and even if inflation has hit the ECB’s target by then." 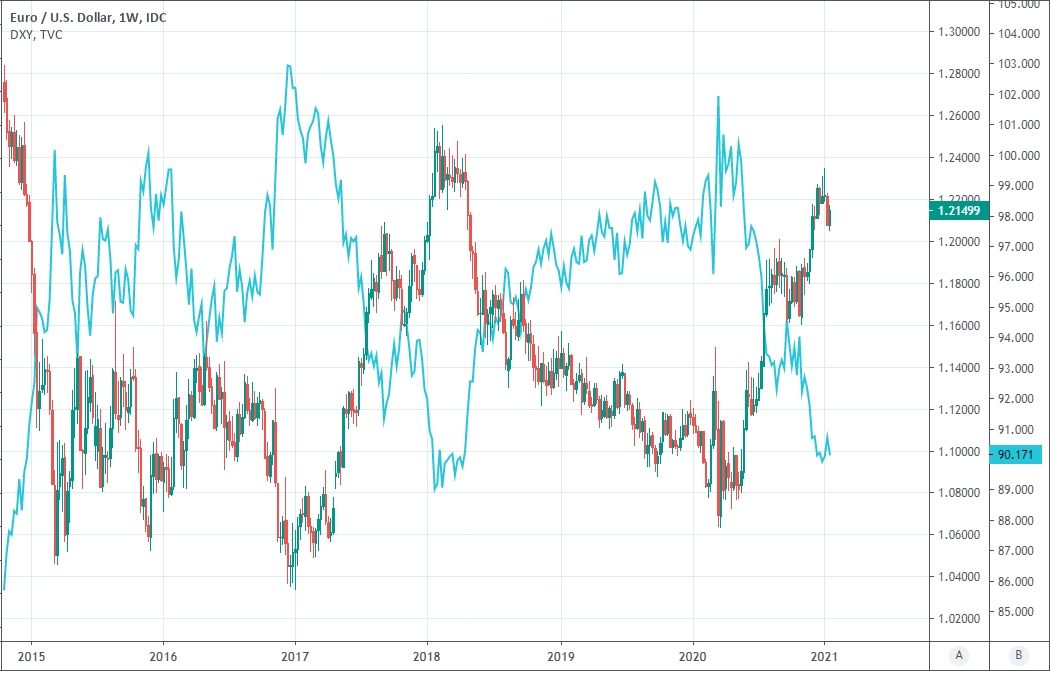 The ECB wouldn't appear to be alone in mulling the end of its QE programme as Federal Reserve (Fed) policymakers began suggesting this month that a tapering of theirs could come sooner than markets were anticipating, although those suggestions came against a backdrop of investors increasingly anticipating that the bank would automatically lap up ever larger volumes of debt issuance that are expected to result from the new White House administration.

"Lagarde is going to need to do more and promise further stimulus if the market loses confidence or thinks their approach is overly optimistic," Patel warns.

Fed Chairman Jerome Powell has since been prompted by market conditions to squash speculation of an imminent tapering as it had driven a counterproductive further increase in bond yields and lifted the Dollar, although had the other policymakers not broached the subject the Fed may have risked storing up trouble further down the line because the eventual adjustment in the bond, currency and stocks markets could've been larger than otherwise.

Meanwhile, Europe has not been the subject of such expectations or constraints so there was little to need to telegraph that any end to the programme is likely at any point, leaving only a political motivation. The problem for the bank and potential boon for the Euro is that taper talk would risk fomenting the upward exchange rate pressures that the ECB has complained about since September and which it eventually found itself pushing back against in 2017 also.

"The ECB is now saying that if bond markets continue to behave, it’s likely that it won’t have to spend the entire PEPP envelope. To be clear, it wouldn’t be the first time that a central bank managed to keep yields low simply by aiming a bazooka at markets with a promise to counter any and all resistance with overwhelming force. That said, it still looks like an invitation for markets to test the ECB’s resolve," Pantheon's Vistesen says. "We are fairly confident that [Italian] yields remain the key variable to watch." 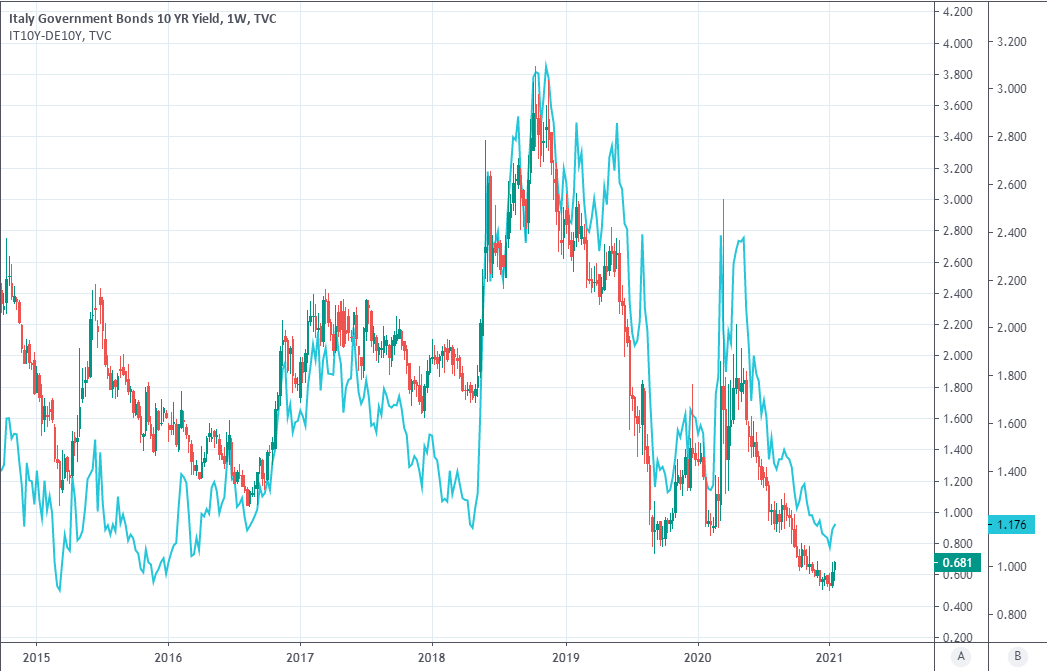