The Euro-to-Dollar exchange rate opens the new week slightly softer than where it closed on Friday and could be vulnerable to losses over the coming days if European Central Bank (ECB) concerns about currency strength are aired at Thursday's policy meeting, amid growing concerns for the Eurozone economy given the ongoing rise in covid-19 cases in Europe.

The Euro is down 0.20% against the Dollar on Monday at 1.1825 amidst a soft start for equity markets amidst investor caution ahead of the U.S. election, a failure by U.S. politicians to agree a new stimulus package and persistent worries about covid-19 infections. "The resurgence of COVID-19 cases has started to weigh on European currencies. The latest wave of increasing new cases in Europe has brought localised restrictions which could weigh on the budding economic recovery," says Nikolaos Sgouropoulos, analyst at Barclays.

Expect the broader global backdrop to maintain its grip on currency markets, with the rule of thumb being the safe-haven Dollar rises when markets are falling, while the Euro should be expected to outperform when markets are rising.

However for the single currency, some domestic risks lie ahead over coming days with Thursday's ECB meeting being the main event on the calendar.

"The EUR faces further challenges this week," says Petr Krpata, chief EMEA strategist for currencies and bonds at ING. "Our team expect a strongly dovish message from President Lagarde and plenty of hints about more QE in December. Incidentally, ECB research has recently concluded that a 10% increase in the size of the ECB’s balance sheet relative to the Fed could knock 3.5% off EUR/USD." 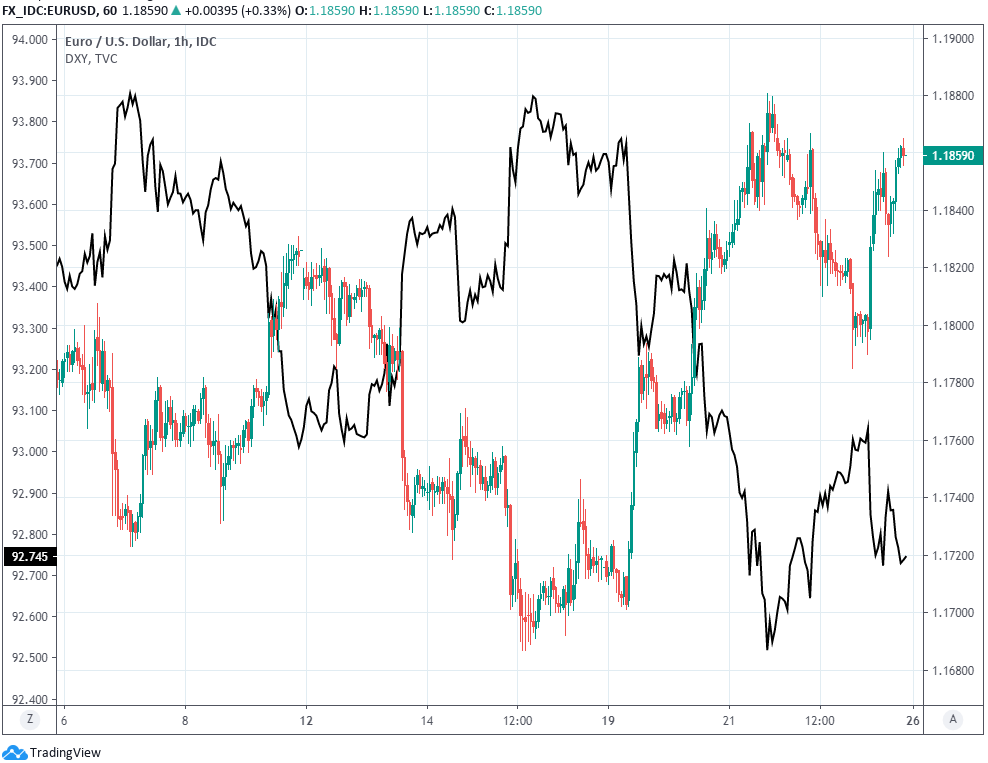 Investors appeared to price out any prospect of a victory by the incumbent in the Tuesday, 03 November presidential election following last week’s debate, leading to gains for most currencies over the Dollar. However, this week investors might struggle to avoid taking note of renewed Euro-negative economic divergence.

“The resurgence in the coronavirus pandemic and negative impact on the economy are raising calls for further policy support. While we do not expect new policy announcements from the ECB at next Thursday's meeting, it could well send dovish signals for a December decision to increase / extend PEPP,” says Jakob Ekholdt Christensen, chief analyst at Danske Bank.

PMI barometers of the U.S. services and manufacturing sectors both rose for the month of October on Friday, contrasting with the results of surveys in Europe where gains for manufacturing were marred by coronavirus-related falls in gauges of activity within the bloc’s services sector.

"For now, we have to treat the PMI data with some degree of caution and judge them in combination with the broader and more detailed surveys such as the German Ifo (due on 26 October) and the European Commission’s sentiment index (due on 29 October) to assess the performance of the European economy in October,” says Florian Hense, an economist at Berenberg. "Virus trends over the next few weeks will matter much more for the Q4 outlook than any economic survey for October."

"Intraday Elliott wave counts are indicating dips should hold around 1.1770 and above 1.1871 (21st September high) would initiate recovery to 1.1971," says Karen Jones, head of technical analysis for currencies, commodities and bonds at Commerzbank, who's a buyer of EUR/USD from 1.1810. "A close below 1.1688 would imply losses to the recent low at 1.1612."

It’s because of Europe’s PMI declines that investors and the Euro may pay closer attention than usual to Monday’s 09:00 German Ifo survey, which many will look to for confirmation of declines in activity.

A disappointing Ifo survey might indicate trouble ahead in the final quarter for the Eurozone economy, just days before the ECB's latest policy decision is announced at 12:45 and followed by a press conference with President Christine Lagarde at 13:30.

"Expect more dovish language but no more. Real action will take place in December," says David Oneglia, an economist at T.S. Lombard, an independent investment research provider. "The uneven impact of the Covid shock makes fiscal transfers the only effective way to support growth and inflation as long as the virus lingers on. Central banks play only a secondary role. Nonetheless, the ECB needs to send a signal. One option is increasing the pace of asset purchases with the implicit aim of weakening the euro to support inflation. An ECB Bulletin article from Tuesday claims that more than half of EUR appreciation this year is due to the Fed’s balance sheet having expanded 16% more than the ECB’s. Not controlling for the launch of the EU Recovery Fund makes this conclusion embarrassingly spurious, but it gives the doves in the Governing Council an excuse to push for action." 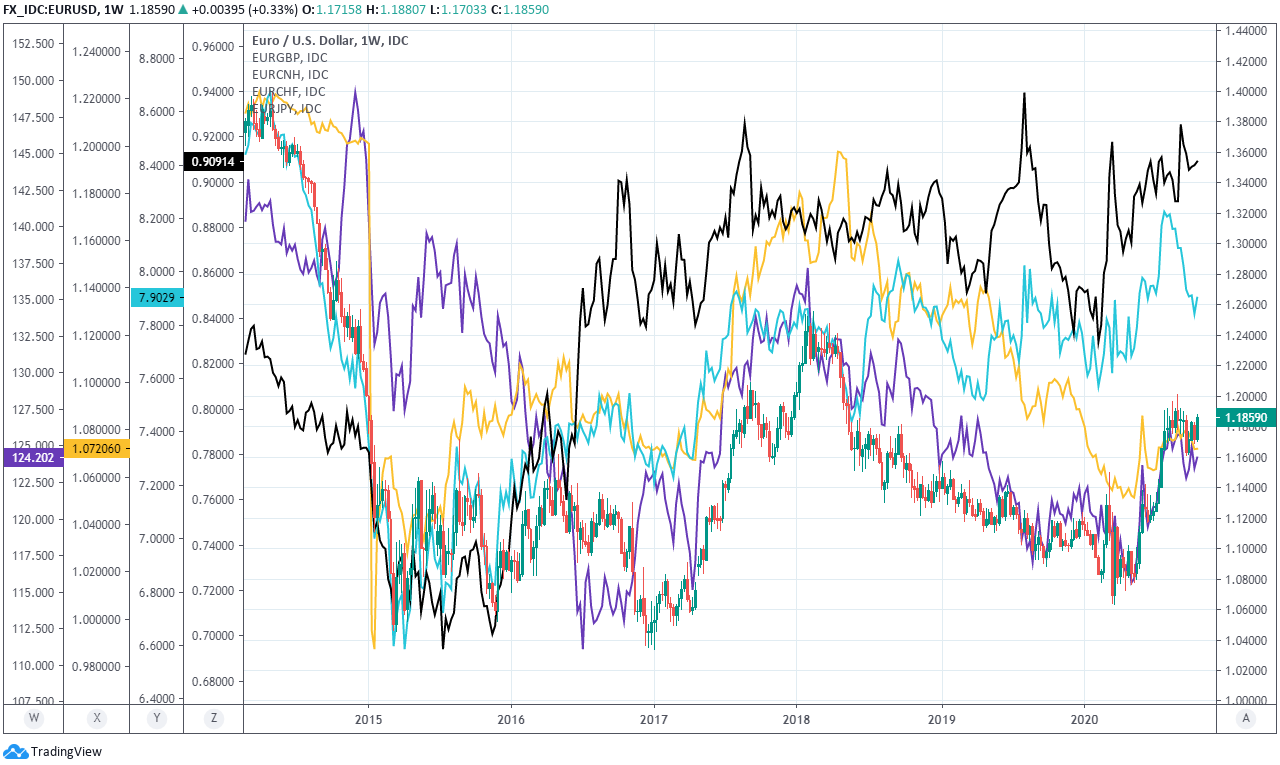 The ECB widely expected to leave all of its interest rates unchanged at or below zero, while holding off on any changes to its quantitative easing programme until December. But it's also highly likely to address mounting risks to Europe’s economic recovery stemming from both coronavirus containment measures and strength in the Euro.

The bank had already been hostile to the rising Euro in early September when the coronavirus was still largely contained on the continent, fearing for its inflation target and EU economic recovery, given that significant currency strength can stifle both inflation and export competitiveness.

Since then second waves of infection have grown to be larger than the first, with government responses now threatening a final quarter economic contraction, and the trade-weighted Euro has returned to earlier highs due to weakness in the Dollar and Pound Sterling among others.

Gains last week for EUR/USD, EUR/GBP, EUR/CHF, EUR/JPY and EUR/CNH lifted the trade-weighted Euro back to highs that drew ECB protest in September, which might mean that some form of rhetorical response is the least that investors can expect on Thursday.

"It took the ECB research team 10 years to notice something that the rest of us had known for ages – namely that relative balance sheet developments between Fed and ECB matters for EUR/USD," says Martin Enlund, chief FX strategist at Nordea Markets. 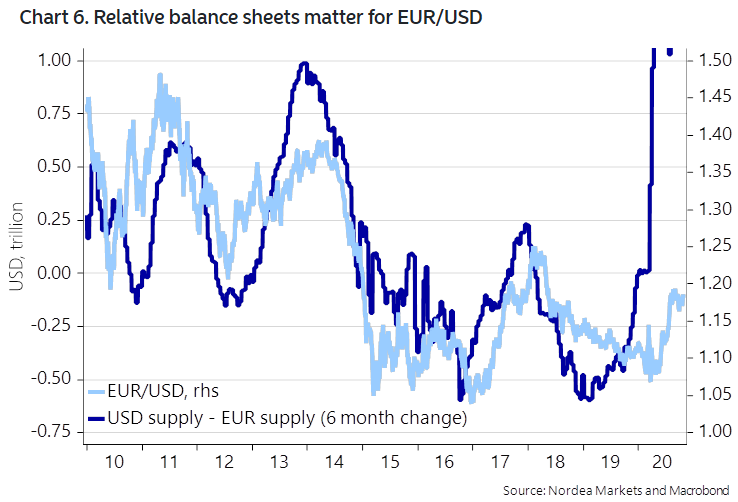 "Next step is for the ECB to acknowledge that the Fed balance sheet is more important for EUR/USD than the ECB balance sheet, but that is probably too much to ask for, since it would be equal to admitting that the ECB policy is no longer potent. We will probably have to wait (at least) another decade for such an official epiphany," Enlund adds.

The ECB decision is announced at 12:45 and just after U.S. third quarter GDP data is out at 12:30 London time, which is expected to show the economy growing at a quarter-on-quarter pace of 32%, reversing much of the -31.4% contraction seen in the prior period.

Some economists anticipate even stronger numbers than consensus for the U.S., which is increasingly being forecast to overtake the Eurozone next year, undermining what was once a key pillar of the Euro-Dollar rally.

The European Union's coronavirus recovery fund was expected to bolster growth so that the continental economy outpaced the U.S., but it was designed with only one wave of coronavirus and its resulting 'lockdown' in mind, not with a second wave and in any case approval of the vehicle has proven difficult at the European level.

Rising infections, signs of a faltering October recovery, an elevated Euro-to-Dollar rate and Thursday's ECB meeting may see Friday's GDP and inflation numbers from major European economies going largely under the radar in the absence of any meaningful surprises.

France, Germany, Spain and Italy - which have all since seen restrictions tightened of late - are expected to announce robust third-quarter recovery figures between 06:30 and 11:00 am London time on Friday.

Additionally, Eurostat is expected to say that annual Eurozone inflation remained at -0.3% in October and that the more important core inflation rate remained at 0.2%. Both are a long way off the "below, but close to 2%" target the ECB is obliged to deliver, and underline the extent to which the bank is likely to oppose further strength in the Euro.

"We project a large rebound of EA economic activity in Q3 (Barclays: 11.5% q/q), led by Spain (17.9% q/q) and France (16.8% q/q). Lower drops in Q2 should imply lower rebounds for Italy (12.5% q/q) and Germany (8.2% q/q). Given the increased activity restrictions in the last few weeks of Q3, we think risks are skewed to the downside. We think that the first release of October EA inflation will likely confirm substantial disinflationary pressures at the core level, previously somewhat overshadowed by summer seasonal distortions. We project euro area headline inflation to slide lower 0.1pp to -0.4% y/y," says Francois Cabou, an economist at Barclays. "Economic momentum is likely to get worse before it gets better. Indeed, a third consecutive decline of EA PMI composite output, returning to contractionary territory in October (-1.1pts to 49.4) is likely to only partially reflect measures taken in October."