Europe's unified unit was already on the back foot Friday before Eurostat said the bloc's economy contracted by -12.1% during the second-quarter, a larger fall than the -12% anticipated by consensus but one which came alongside an upgrade of estimates for the opening months of the year.

Last quarter's economic contraction was historic, but much less so than in other parts of the world and when combined with a first-quarter GDP estimate that rose from -3.8% to -3.6% the single currency bloc's economy actually did better than many had thought during the first half of the year.

"Both the high-frequency data and the traditional monthly survey data suggest that activity picked up further during the first month of Q3. Yesterday’s European Commission economic sentiment survey for July showed that production expectations among manufacturers turned positive. Both total and export order books rebounded for the first time since February. This bodes well," says Florian Hense, an economist at Berenberg. "Helped by a base effect, Q3 should show a strong rebound in GDP relative to a Q2 depressed by a very weak April. With luck, the economy may recover close to half of its Q2 losses in Q3." 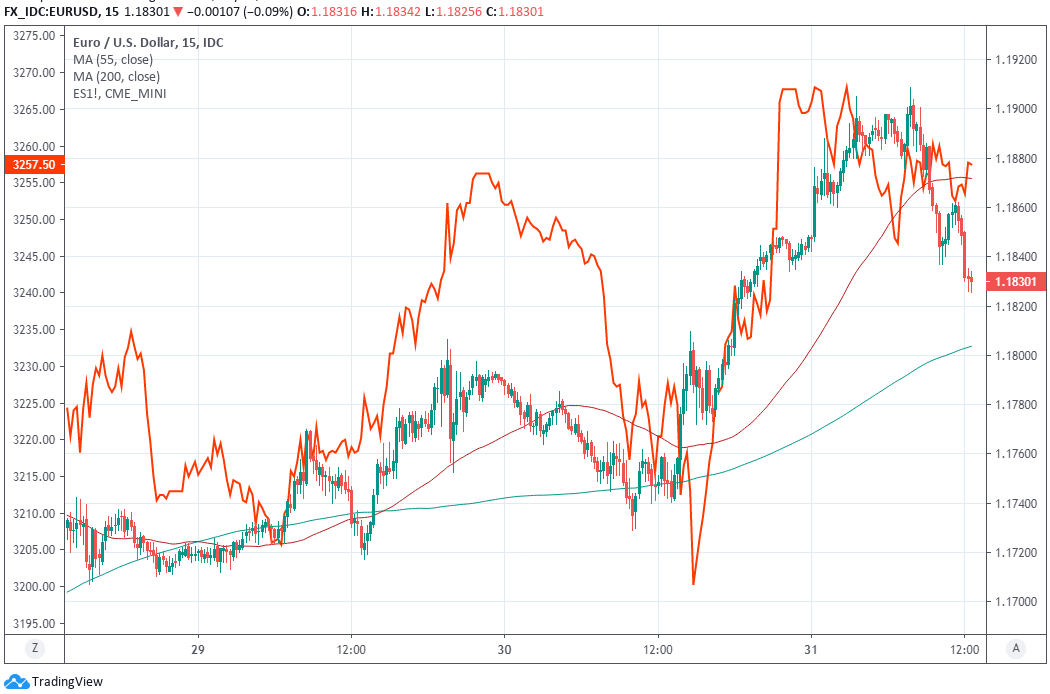 Euro losses reversed only momentarily, with the rebound potentially limited by other Eurostat data showing core inflation surprising on the upside with an increase from 0.8% to 1.2%, when consensus looked for an unchanged reading. The consumer price index also surprised, rising from 0.3% to 0.4%. Core inflatin tends to garner more attention from the market because it excludes energy and food prices as well as tobacco and alcohol, prices of which can all be substantially influenced by factors unrelated to domestic demand.

Rising inflation numbers can lift currencies when they're seen as likely to facilitate a favourable change of monetary policy, either through higher interest rates or bond yields, but in the coronavirus ravaged world of 2020 interest rates and bond yields are unlikely to move higher for a substantial period of time no matter where inflation goes.

This potentially renders rising inflation a net-negative for currencies and may explain the Euro's subsequent underperformance, in part because higher inflation further reduces the already-paltry returns offered by bond yields which have been crushed by central banks this year.

However, the Euro's retreat did also come alongside a broader tick higher in most major U.S. Dollar exchange rates, which all fallen heavily this week.

"There is a net short DXY position in the latest CFTC data. The last time the speculative market turned bearish the DXY, in July 2017, the dollar fall had already lasted eight months. It has taken a big positional swing to drive the DXY down this far from the peak," says Kit Juckes, chief FX strategist at Societe Generale. "The dollar's weakness is reflected in a stronger euro, also driven by a large position shift that sees net longs as big as they were just before EUR/USD peaked in 2018, and they are concentrated in relatively few hands. This echoes the DXY position. Seasonal patterns don't point to EUR/USD weakness in August, and the longer-term EUR trend is upwards. But at the bare minimum, we would look for increased volatility, and a correction, in August." 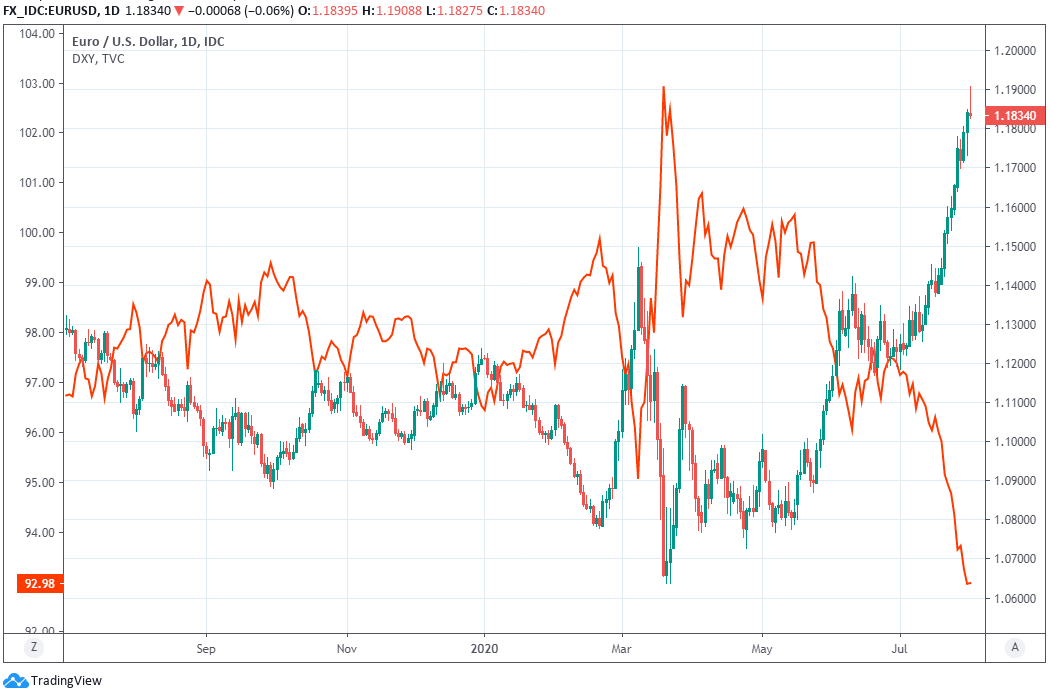 The Dollar has gone from hero to zero and vice versa with the Euro, although there's no one single factor to explain the moves but rather a cacaphony of political and economic developments, not to mention risks to the outlook.

But Dollars were bought back Friday ahead of the weekend, which is the last opportunity for U.S. lawmakers to extend enhanced welfare benefits for American households before they expire with the July month. Pre-election politics have so far stymied the bipartisan spirit that produced the expiring funding from the original $2 trillion CARES Act.

The Dollar was correcting higher while stock markets and risk currencies like the Euro were faltering on Friday, a trend that some analysts see enduring through the traditional holiday month of August, which is typically marrred by thin trading volumes and reduced risk appetite. Fertile ground for a Dollar rebound.

The Euro-to-Dollar rate has this week crossed a major technical milestone that could ultimately see it back above 1.25 in the months ahead, so long as a cluster of support levels between 1.14 and just north of the 1.16 handle hold up.

"EUR/USD is through tough resistance at 1.1815/33, this was a 61.8% Fibonacci retracement, a 12 year resistance line and the September 2018 high. We are surprised that this has not held the initial test. The break above here targets 1.2635/66, the 200 month ma Initial support lies 1.1663 (cloud support) ahead of the March high at 1.1495. Ideally dips lower will be contained by the 2 month uptrend at 1.1430," says Karen Jones, head of technical analysis for currencies, commodities and bonds at Commerzbank. 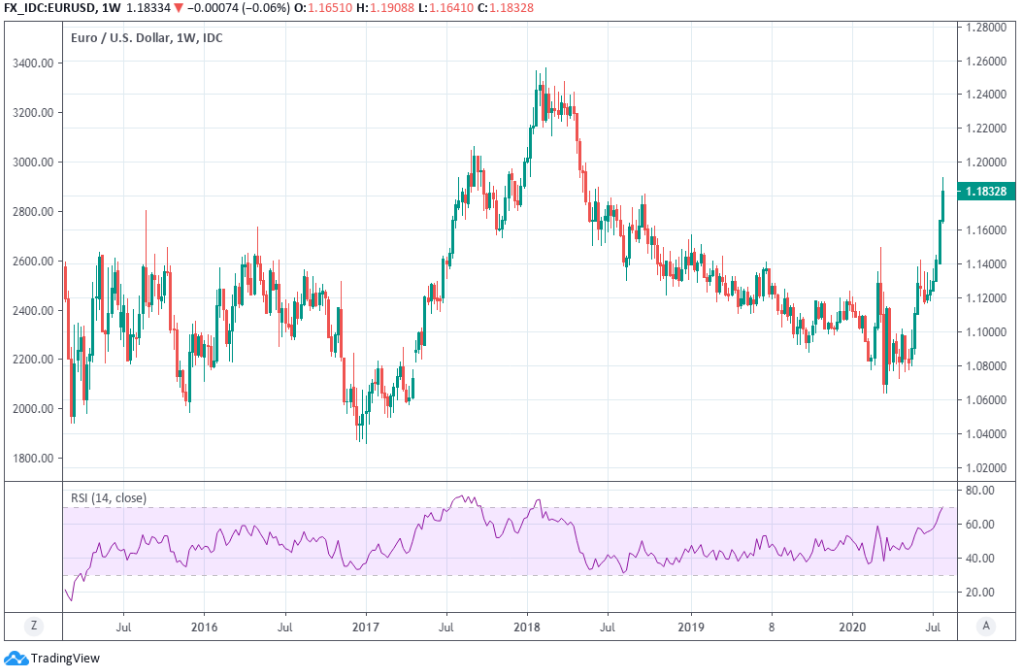