The Dollar was swimming in the red Wednesday amid continued deadlock in Washington's bipartisan talks over an economic aid bill, again placing the weight of the world on the shoulders of the Federal Reserve (Fed) just hours out from its July policy statement, which is a double edged sword for the greenback.

Dollars were sold widely on Wednesday, leading to declines against most major developed and emerging market currencies while U.S. stock market futures were edged higher amid losses for cash equity markets in Europe.

Fresh Dollar losses follow Tuesday's stability, which faded toward the North American close as Republican and Democrat lawmakers remained far away from an agreement on the next economic aid package.

Weakness also comes ahead of the July Fed decision at 19:00, which is to be followed half hour later by a press conference with Chairman Jerome Powell. 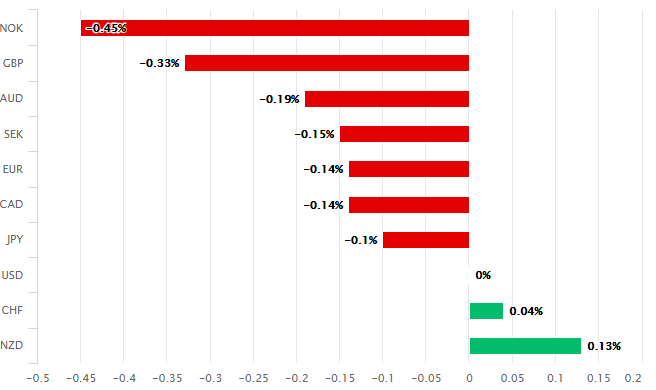 "It's too early for serious talk of yield curve control, adjusting the inflation target or other such measures, so concrete action seems unlikely. In the meantime, I'll reiterate an August preference to be long vol, yen and Swiss francs, short high-beta currencies. Time then, to take off our AUD/USD long, at least for a month," says Kit Juckes, chief FX strategist at Societe Generale.

Enhanced support has given households an $600 per week on top of state benefits since late March thanks to the CARES Act, which was passed as coronavirus containment efforts saw vast parts of the U.S. economy shuttered.

That funding expires at month end while a combination of pre-election politics and ideological zealotry has so far been allowed to hold up progress on another round of stop-gap measures.

"The two sides still appear far apart with White House Chief of Staff Mark Meadows saying that “I don’t know that I would characterize it as getting closer,” says Peter Shaffrick, a global macro strategist at RBC Capital Markets. 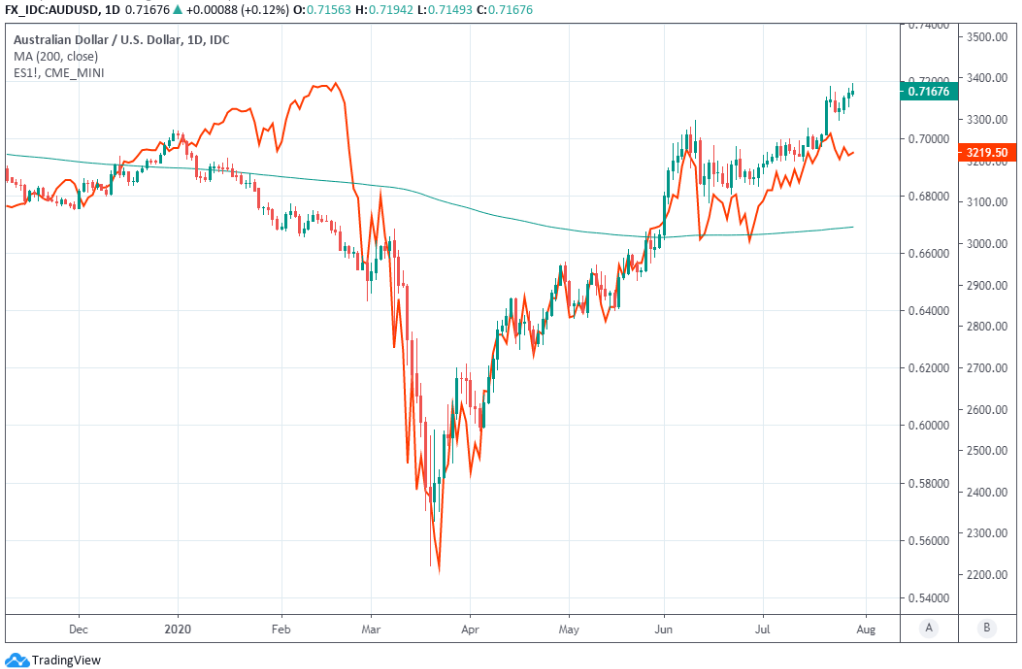 With one eye on the looming election, opposition politicians have sought to outbid both Republicans' latest proposal as well as the original $2 trillion CARES Act. Democratic Party lawmakers are reportedly looking for a $3 trillion package of unemployment benefits and other initiatives, but have met stiff opposition from Republicans. Meanwhile, parts of the governing party have cited long held concerns about a rising budget deficit to justify reducing the overall package to $1 trillion, helping cement a deadlock.

Republicans may simply be keen to avoid being bounced into handing Democrats a policy victory so close to the election but some blinkered senators are seemingly oblivious to the reality that a mismatch between income and expenditure can be lifted not only by increased government spending, but also a collapsing economy. Collapsing economies automatically raise debt-to-GDP ratios and deficits as a percentage of GDP without lawmakers spending a dime because the economic contraction would grow if the rug is pulled from under America's feet.

"While it may be unlikely that a deal will be formed prior to the end of the week, there is the possibility that congress may extend benefits temporarily until a new deal is reached. We anticipate that a deal will be formed before the August recess, to make room for campaigning in the fall," says Sarah Ying, a strategist at CIBC Capital Markets. "The FOMC is expected to be a non-event, but a more accommodative tone may put downward pressure on the USD near term." 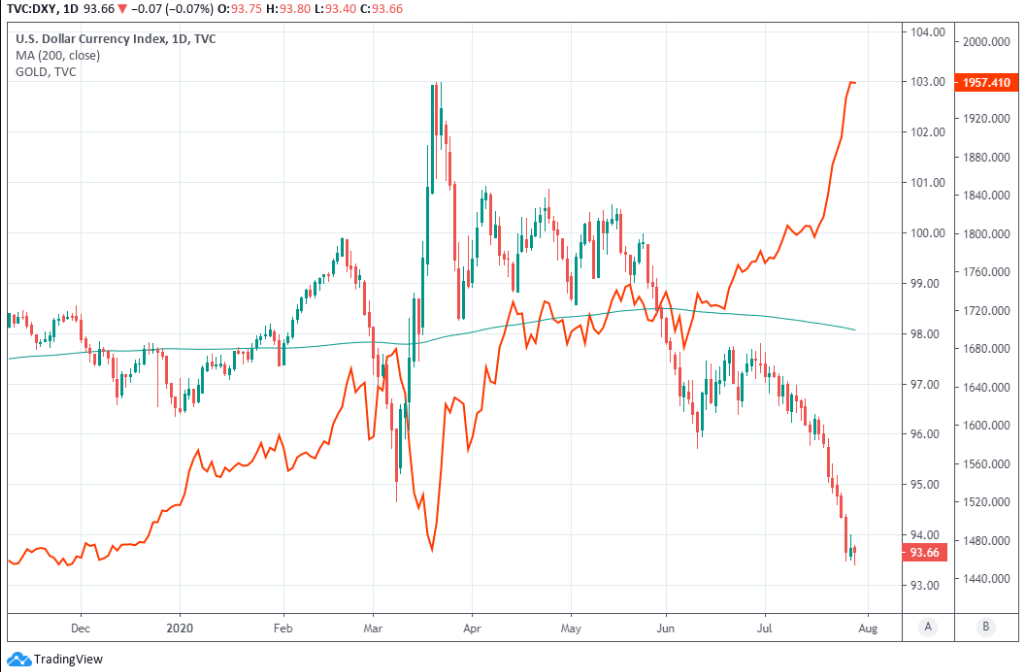 Republican senators risk making themselves the architects of not only a steeper deficit but also a greater crater in the economy and if opinion polls are worth any more than a pinch of salt, a loss of the party's senate majority. But divisions in Washington are also be helping to squeeze the Dollar while leaving the weight of the economy and country, if-not the world, on the shoulders of the Fed.

With uncertainty about the timing and size of federal support the Fed could feel compelled to reassure to markets, or an elbow to congress, given that Chairman Jerome Powell has said repeatedly that the present is not the time to worry about deficits, including on page 16 here.

The bank has been quick off the mark this crisis, expanding its toolbox and launched myriad initiatives well before Washington got its act together in March.

The Fed extended many of those programmes on Tuesday so that they run until year-end, rather than ending in September as was previously planned.

"We could also see the market largely shrugging off anything Powell says tonight as fiscal policy has gained ascendancy and much of Powell’s efforts may amount to begging the Trump administration to continue its support for unemployment benefits and add further stimulus," says John Hardy, head of FX strategy at Saxo Bank. "The real targets for EURUSD are inevitably round numbers – in this case the 1.2000 area to start." 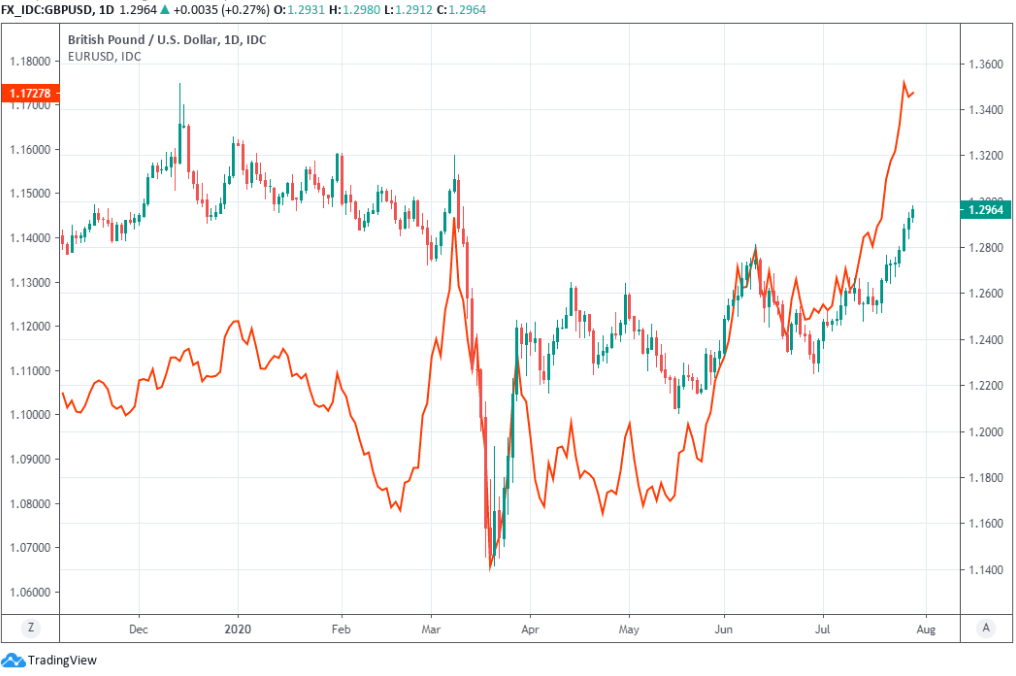 Analysts are largely looking for July's Fed statement to pass without major event because many see the bank as unlikely to announce a meaningful increase in its own support for the economy before it knows the shape and scale of the forthcoming offering from congress.

Some say a non-event and neutral tone could lend temporary support to the Dollar, which has fallen sharply against all major currencies since the beginning of June. The bank said that month it would continue buying U.S. government and corporate bonds for an unspecified period and that it would assist the economy further if needed.

"Today's FOMC is likely to be a non-event, although a dovish surprise is possible," says Stephen Gallo, European head of FX strategy at BMO Capital Markets. "Although the economy still needs a boost, stocks and bonds don't. Where the Fed's true channel for helping the economy is via financial markets, the best it can realistically do is more of the same. With that in mind, if there aren't any dovish tweaks, we could see the various USD indices claw back 0.5% (or something around that magnitude)."

The bank cut its interest rate back to the 'zero lower bound' in mid-March and had already launched an unlimited quantitative easing programme as well as an array of new corporate liquidity and funding facilities before the end of March when the CARES Act was passed.

However, it also later came out in early April and said that it would create $2.3 trillion of new money to support loans to companies and households, closely matching the size of the CARES Act provision.