Europe's single currency gained a fraction on the Dollar last week but the greenback was in demand Friday as concerns built about the implications that a growing second wave of coronavirus could have for economic recoveries.

Trade tensions were also in the mix Friday but outbreaks in southern and western parts of the U.S. have continued to gather pace at the weekend while momentum built behind those in Mexico, India and South Africa, with all threatening to re-steepen the global epidemic curve. Some reopening states are now retightening restrictions on movement and activities.

This places a question mark over the global recovery that could keep stock markets and the currencies that follow them all pointed lower, which has included the Euro of late. Some analysts are warning of further downside for the Euro in the coming days, although others are looking for upside.

"We’re bullish on EUR/$ for 2H20, but for the week ahead the threat of new Covid-19 cases in the US, profit-taking in equities and the threat of a re-opening in the trans-Atlantic trade war suggest that EUR/USD may briefly drop to the 1.1100 area," says Chris Turner, regional head of research at ING. 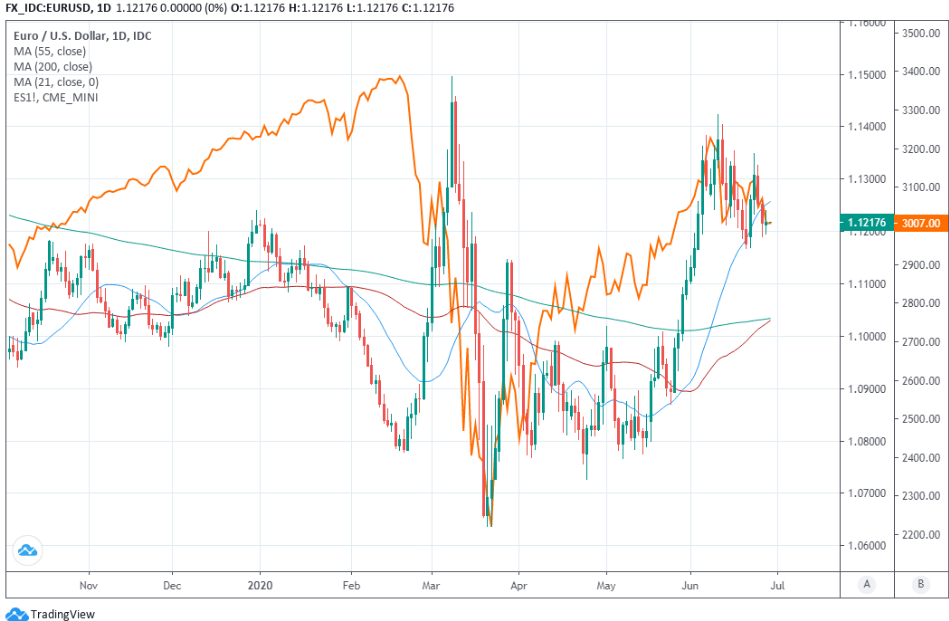 A swelling second wave in the U.S. would be enough to keep a bid coming for the Dollar and stock markets pointed lower, many analysts say, which might be bad news for the Euro given the positive correlation between it and stocks as well as the negative relationship between the Euro and Dollar Index. Correlations argue the Euro would suffer but some analysts see Europe's success in squaring away the disease as a gamechanger.

"There are several reasons NOT to worry too much about the most recent case-spike. First, it is probably politically unpalatable to implement a new complete national lock-down, why a March-like panic is still unlikely. Second, the Fed has taken over liquidity risks and also partly credit risks since March, why even in case of a new round of lockdowns, the dash-for-cash will likely prove less violent. Third, testing capabilities are now up and running, which increases the probability that the virus spread can be contained even with a more open economy. Overall, we see a very low risk of a replay of the global scenario from March but Europe is currently outsmarting the US," says Andreas Steno Larsen, chief FX strategist at Nordea Markets. "If you think we sound awfully home-biased already by now, then take a look at the below chart."

The U.S. was among the last large and developed countries to contract the virus and was also among the first to come out of 'lockdown', announcing guidlines on April 16 for a May reopening just after Germany did the same. But Germany spent longer grappling with the virus under 'lockdown' and had a comprehensive system for testing in place, which might have played a role given that many of June's worst U.S. outbreaks are in the states of early reopeners.

"If the Covid-19 “hammer and dance” contest between US and Europe was to be decided today, Europe would likely have won the match. It of course ain’t over till the fat lady sings, why the second leg is still to be played. We stay long EUR/USD," Larsen says. "The PEPP is basically “unlimited” now as the German Constitutional Court will back down on its constitutional “Cry Wolf” according to Finance Minister Scholz. We stay long EUR/USD." 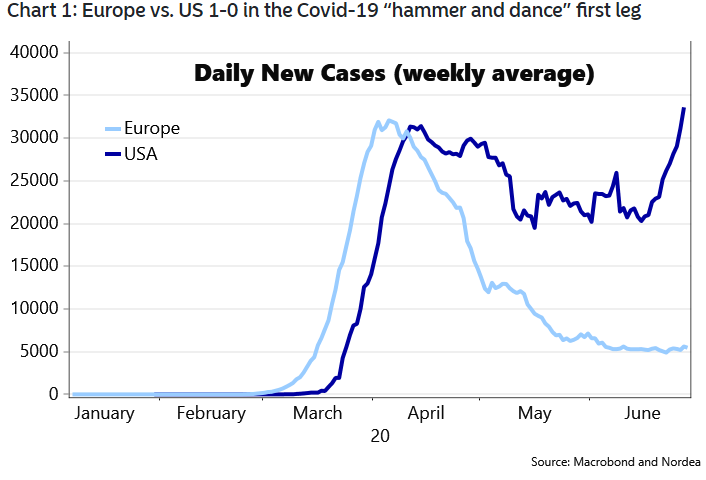 IHS Markit PMI surveys revealed little that investors didn't already know last week but Europe's economy is currently thought to have suffered less at the hands of the coronavirus than its North American counterpart, given U.S. GDP fell by -5% in the first quarter while the Eurozone economy shrank by -3.8%.

Unemployment has also not risen in the EU either, although these differences could be explained by the use of emergency 'short-time work' and 'furlough' schemes that will come to an end with the crisis, if not before it as in the UK.

"Investors are getting increasingly nervous about this development and they have been more risk averse ," says Georgette Boele, a senior FX strategist at ABM Amro. of the U.S. second wave. " If there is a prolonged period of risk off between now and three months (as we expect) it is likely that investors take profit on their current open positions for example being long euro. Indeed, the net-long speculative euro positions have risen further and are now at an excessive level in our view. We expect risk off in financial markets to result in a squeeze of this net-long euro positions resulting in a lower euro, and a revival of the US dollar."

Investors won't know for sure who came off better or worse from the crisis until the emergency support measures used to limit long-term damage to the economy are withdrawn, although for this week at least the data says that Europe is doing better than the U.S. at containing the disease as well as protecting its economy and this could matter to investors who've been confronted by a resurgent U.S. outbreaks and local government decisions to roll back aspects of their earlier efforts to reopen economies.

Nordea's argument is that Europe's single currency could develop tthe allure of a safe-haven, rather than simply benefiting from so-called short-covering as it mostly did when rising against the Dollar during the March 2020 meltdown that left no market untouched. The Euro rose then because earlier sellers had used the proceeds of those earlier sales to buy emerging market currencies and other risk assets that began to fall apart as it became clear the virus had truly escaped China's borders and that a global pandemic was on the way.

"The currency market continues to be stuck between hope and fear. It hopes for an economic recovery after the easing of the corona lockdowns, but at the same time fears a second wave of infections. Therefore, we expect volatile sideways trading in the coming week," says Antje Praefcke, an analyst at Commerzbank, whose technical analyst colleagues say there's a risk of another dip back to 1.1034 for the Euro ahead of a renewed push higher this week. 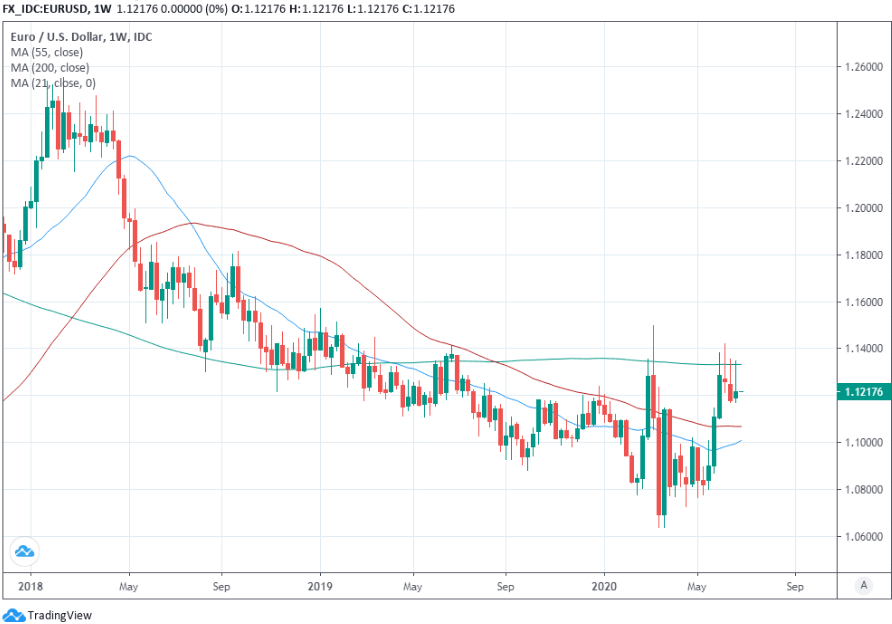 "There has been a distinct lack of follow through following the bounce from the 38.2% retracement at 1.1172. This is disappointing and it is possible that we will see a deeper retracement to the 200 day ma at 1.1034 ahead of a swing higher. While this would delay our forecast it does not alter it - the view stays positive," says Karen Jones, head of technical analysis for currencies, commodities and bonds at Commerzbank. "Key resistance remains the 1.1422 recent high and this, together with the March high at 1495, represent quite formidable resistance and we would allow them to hold the initial test. However a break higher is favoured and above here will target 1.1570."

The Euro hasn't been popular as a 'funding currency' since before March so wouldn't necessarily benefit from any second thoughts among investors about the timing of any global recovery that lead to short-covering in risk markets, though a genuine safe-haven appeal can't be ruled out. Such an appeal could lift the Euro-to-Dollar rate but it's a long way from obvious that any resulting performance would be sustainable, especially if the global epidemic curve continues to go in the same upward direction as the U.S. one.

A re-steepening global epidemic curve could be an even bigger problem for the global economy, the prospects of which the Eurozone is most sensitive to given its orientation toward manufacturing and exports. The world's total of confirmed cases crossed the 10 million threshold this weekend, aided by a strong and ongoing rise in momentum behind outbreaks in large but developing countries.

Many analysts say that a global recovery is necessary for Europe's single currency to rise much further than it already has done in June which, when combined with implications of a growing global pandemic, could mean that any Euro rally is short-lived. In addition, European countries are contemplating relaxing border restrictions between each other and other countries across the globe including China so a second wave could yet materialise in Europe.

All of this keeps the Euro focused on daily disclosures of infection numbers in U.S. and elsewhere. There's no major economic scheduled in Europe.

"The single currency is also being negatively affected by the risk of new US tariffs being introduced on European products," says Asmara Jamaleh, an economist at Intesa Sanpaolo. "However, the main driver of the exchange rate is still expected to be the dynamics of risk aversion in relation to the evolution of the pandemic, therefore a potential deterioration in market sentiment would favour the dollar to the detriment of the euro. In July, negotiations over the Recovery Fund will heat up, and could add volatility."