The Pound crumbled Friday as reports of a Chinese threat to January's 'phase one' deal piled on top of building concerns about a second wave of coronavirus to spoil risk appetite ahead of the weekend.

Sterling was lower against all major rivals in the final session of the week but with its heaviest losses coming against safe-havens like the Dollar, which were in demand as the S&P 500 led global stocks lower.

Markets melted after Texas Governor Greg Abbott ordered the closure of all taverns as medical facilities in some parts of the state neared capacity amid a building second wave of coronavirus.

The decision is a setback for efforts to reopen the economy that comes as outbreaks fester in parts of the south and west, which led the U.S. to report its highest daily number of new infections to date on Thursday.

Growing infection numbers are re-steepening the epidemic curve while measures to rollback aspects of the reopening in Texas could see investors questioning official claims that there won't be another lockdown of the economy.

"Renewed lockdowns stand to delay the US recovery. But we also know that Congress and the Fed have a light trigger-finger when it comes to fresh stimulus," says Chris Turner, regional head of research at ING. "Will investors start to identify the second wave as a problem unique to the US, meaning that the dollar does not receive the typical boost on bad US news?"

Coronavirus deaths are way down. Mortality rate is one of the lowest in the World. Our Economy is roaring back and will NOT be shut down. “Embers” or flare ups will be put out, as necessary!

The White House played down the threat on Friday but it wasn't enough to stop Sterling from being sold and the Dollar being bought across the board. 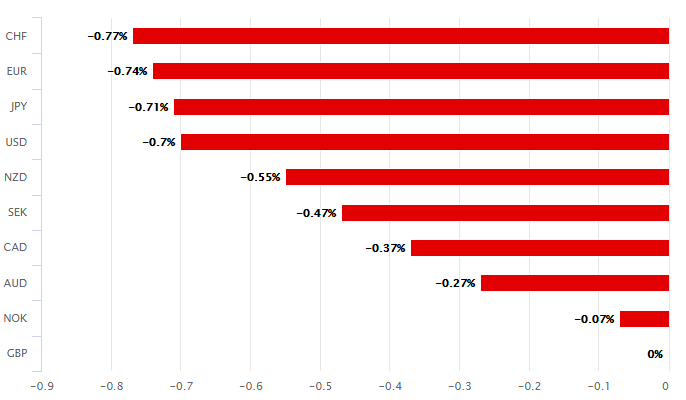 "GBPUSD buyers failed yet again earlier today to get the market back into the 1.2440-60 support zone ," says Eric Bregar, head of FX strategy at Exchange Bank of Canada. "After this traders will likely cling to the daily coronavirus updates out of the problematic US states this morning and decide how they want to be positioned ahead of the weekend."

Losses were aided a Wall Street Journal report that cited anonymous Chinese officials as behind threats to cease agricultural purchases agreed under January's 'phase one deal,' in response to what the country says is U.S. meddling in its own internal affairs.

"Sensitivity to trade tensions was evident from the Navarro blunder over the Phase 1 trade deal earlier this week. Pension funds are also expected to rebalance their portfolios in the coming weeks by lightening their equity holdings after the strong rally in 2Q," says Philip Wee, a strategist at DBS Group. "Some payback may be due for stocks and currencies in July."

Markets are sensitive to developments relating to the trade accord, which largely ended 18 months of trade war between the world's two largest economies, as was demonstrated on Tuesday when White House adviser Peter Navarro said in an interview that it was "over."

But the British currency was already on the back foot after Chancellor Rishi Sunak said the government furlough scheme will continue for eight months but that HM Treasury will otherwise sit on its hands before deciding what further support might be needed, which may have added to perceptions that official support for the economy is slipping. 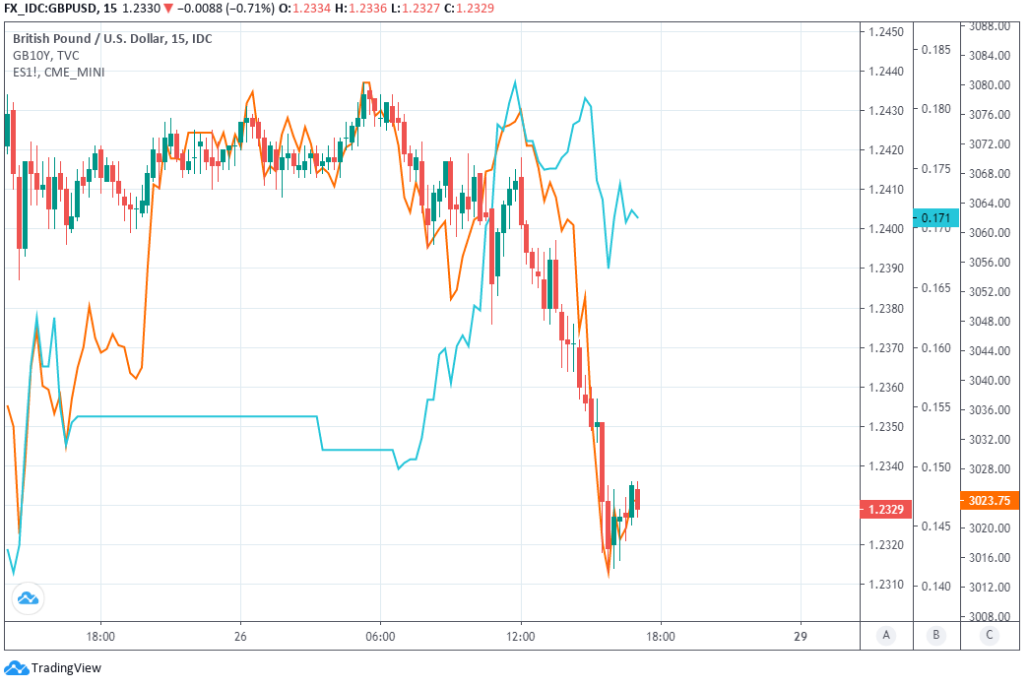 Sunak also expressed reluctance to provide 'bailouts' to British companies who're ailing amid government closures of the economy, saying the bar would be "exceptionally high," and that  "I shouldn't be sitting here trying to pick winners," in an interview with Bloomberg News.

"We look for the government's fiscal & regulatory policies to partly offset downward pressure on the GBP, as they seek to blend pro-business policies with higher levels of government expenditure & intervention in the economy," says Stephen Gallo, European head of FX strategy at BMO Capital Markets in a recent note, who has a three-month forecast of 1.28 for the Pound-to-Dollar rate. "We expect a modest relief rally in the GBP over the coming 3M period and look for the outline of a UK/EU-27 FTA by the autumn. But we also expect the high level of global trade uncertainty, elevated debt and the extent of the UK's "economic reset" to act as a drag on the GBP further out."

Price action comes ahead just before the next round of Brexit trade talks, which have been roadblocked by incompatible objectives on both sides 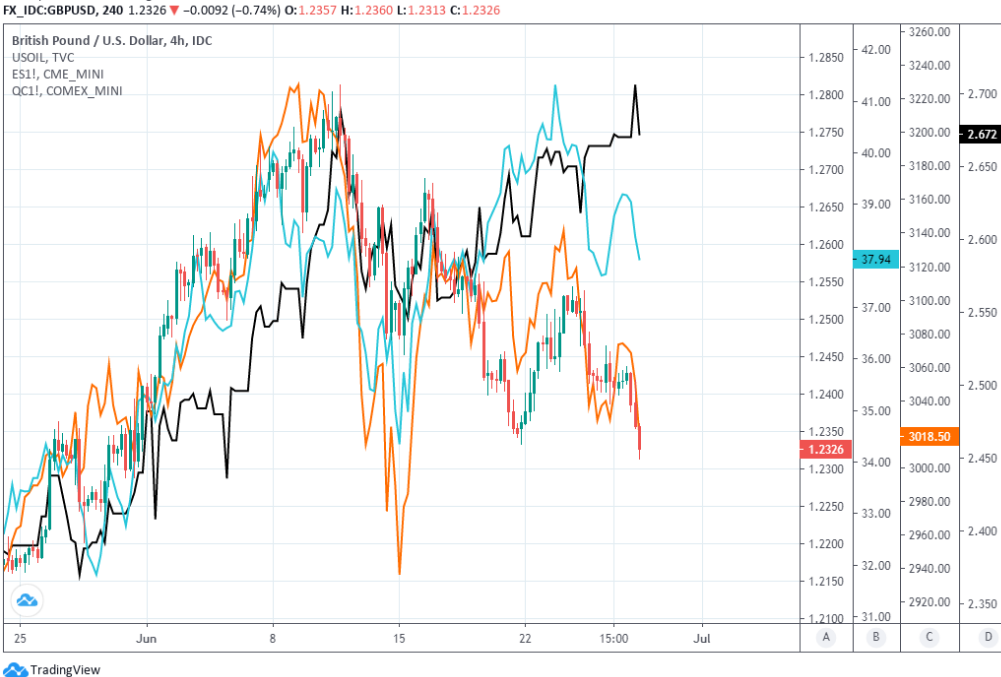 Above: Pound-to-Dollar rate at 4-hour intervals, rolling over in June with S&P 500 (orange) as WTI crude futures (blue).

British negotiator David Frost said last "the fundamentals of being an independent nation are not a negotiating position," continuing a rejection of terms that would be "unprecedented" in the history of trade agreements. It's unclear if this reflects a bluff on the part of an under-fire Prime Minister or a change in the psychology guiding Downing Street in the negotiations.

"With near certainty that the transition period will not be prolonged, uncertainties surrounding the future UK-EU trade relationship risk to slow the recovery out of the coronavirus crisis. We believe that pragmatism will prevent the trade relationship from falling off a cliff at the end of this year, but we continue to see these headwinds keeping the British pound depressed in the next months," says David Alexander Meier, an economist at Julius Baer. 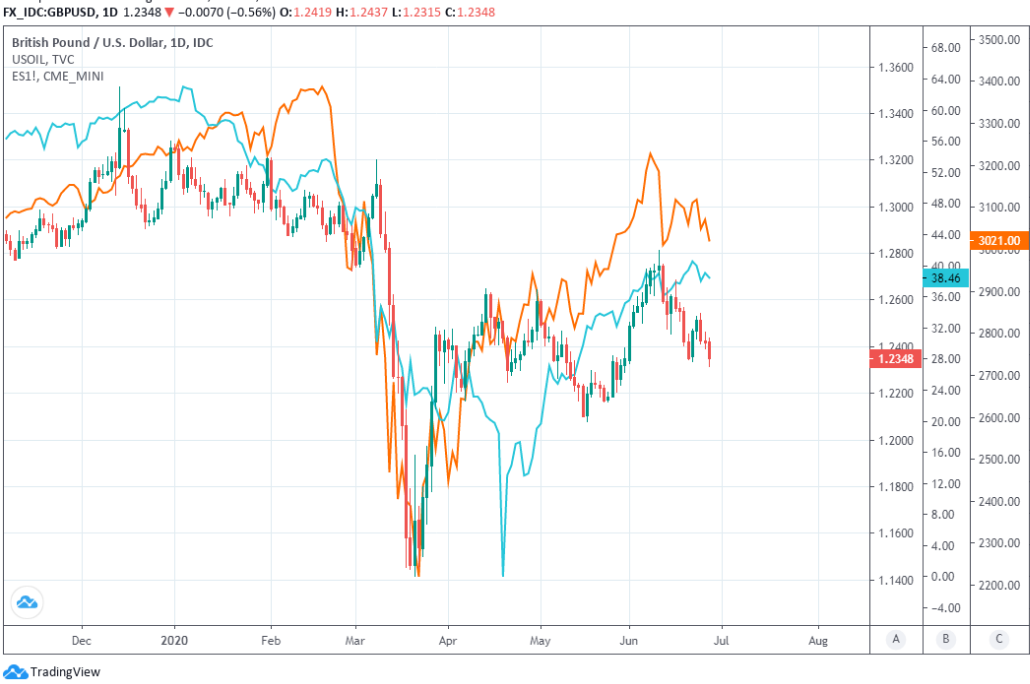