The Pound-to-Dollar exchange rate toppled into the weekend, leaving Sterling clutching for support as the Brexit talks resume and safe-haven demand for the greenback picks up on souring risk appetite among investors.

Sterling slumped into the weekend as concerns about the U.S.-China trade relationship conspired with worries about what a second wave of coronavirus will mean for economic recoveries to spoil risk appetite, leading stock markets and many currencies including the Pound to weaken against the Dollar.

Losses marked the third consecutive fall for a Pound-to-Dollar rate that also closed a hat-trick of weekly declines at the same time, after the ebb and flow of risk appetite turned against it just as HM Treasury fomented perceptions that it and the Bank of England (BoE) are stepping back from the frontlines of the coronavirus battle too early.

The Pound-to-Dollar rate fell below its 55-day moving average at 1.2421 on Friday and could now be vulnerable to further losses in the coming days, especially if investors take badly the government's weekend acknowledgement that it's contemplating retightening the 'lockdown' of Leicester City after an increase in new infections was detected throughout June, and if markets respond adversely to latest statistics out of the U.S., India and elsewhere.

"We are maintaining our short GBP/USD trade idea. The GBP has broken below key support levels against the EUR and USD in the near-term with EUR/GBP rising above the 0.9000-level and cable falling below the 55-day moving average at 1.2420. It has increased the risk that GBP weakness will accelerate in the nearterm," says Derek Halpenny, head of research, global markets EMEA and international securities at MUFG. "The US dollar is set to remain well supported and the FX performance in June suggests the equity consolidation is more a bad sign of what lies ahead." 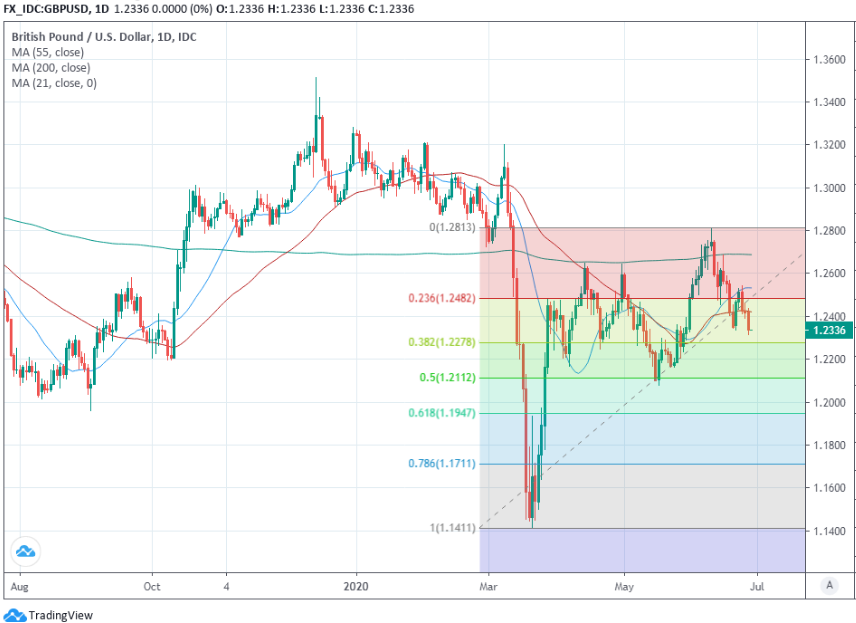 Above: Pound-to-Dollar rate shown at daily intervals with Fibonacci supports of March-to-June rebound.

The Dollar was lifted and risk assets sold after aspects of earlier efforts to reopen the U.S. economy were reversed, with Texas Governor Greg Abbott ordering the closure of all taverns following a sharp pickup in cases across the state and California Governor Gavin Newsom asking Imperial County, which has a population of less than 200k, to reimpose a stay-at-home law. Fears for the U.S.-China trade agreement were also in the mix too on Friday.

But the greenback could rise further in the coming days if the weekend's coronavirus developments provide investors with further cause to question their assumption of a retreat by the virus that gives way to a quick economic rebound in the second half of the year. New Jersey, which has the second largest outbreak in the U.S., reported an 8.2% one-day increase that took its total infection number to 176,045 on Sunday while Florida saw another strong though not record increase of more than 5%.

"The Dollar’s global role creates an inverse correlation between the currency and global growth or investor risk appetite, due to the use of US Treasuries as the world’s primary “safe haven” asset, as well as other factors, such as the expansion of cross-border lending in Dollars to EMs that occurs in a strong global economy. Therefore, we would expect the Dollar to strengthen further if virus concerns result in a larger risk drawdown, even if those concerns are centered on the outbreak in the United States," says Zach Pandl, global co-head of foreign exchange strategy at Goldman Sachs.

Resurgent outbreaks in states located mainly in the south and west of the U.S. have re-steepened the national epidemic curve at the same time as outbreaks in India, Mexico, South Africa et al are threatening to re-steepen the global curve. A swelling second wave in the U.S. would be enough to keep stock markets on the back foot and a bid coming in for the Dollar, many analysts say, but a re-steepening global epidemic curve?

A steeper global curve could mean a much more protracted battle for the global economy that would make the going tougher for those investors who want to believe that June's sideways movement in stock markets was just a period of consolidation before a resumption of the pre-coronavirus rally higher. Rather than a loss of footing ahead of another fall back to the pavement. The Pound needs investors to keep looking on the bright side and through rose tinted glasses because it's followed share markets in near lockstep for months.

"The main driver in the near terms should continue to be the dynamics of the dollar, in response to risk aversion in function of the evolution of the pandemic, the theme that will come back to the fore in the weeks ahead are negotiations with the EU," says Asmara Jamaleh, an economist at Intesa Sanpaolo. "Failure to make progress and a persistent deadlock would result in sterling being negatively affected." 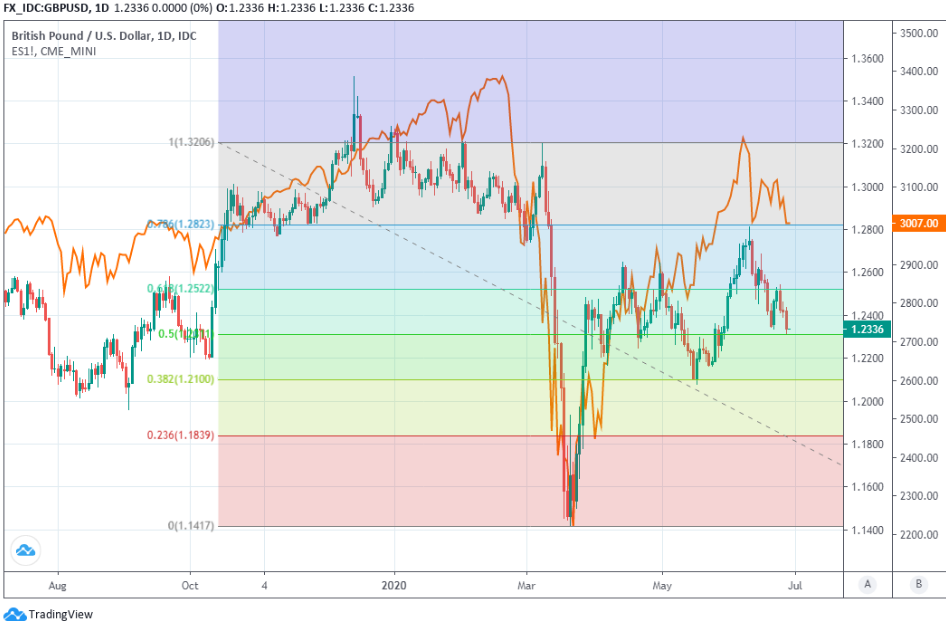 Above: Pound-to-Dollar rate rejected by 78.6% Fibonacci retracement of March fall as S&P 500 (orange) tops out.

"GBP remains in a clear downward trajectory from its Jun 10 peak that suggests it is on track for continued losses, especially if it breaks below the 1.2350 area in the coming days. In the near-term, however, it appears the vicinity of the 1.24 mark will act as an attraction point for GBP price action ahead of a test of late-Sunday’s low of 1.2336. Resistance is 1.2460/70 followed by 1.25," says Juan Manuel Herrera, a strategist at Scotiabank in a Friday morning note.

Even without the prospect of a swelling second wave the Pound might be at risk of losses in the week ahead given the recent elevation of hopes for a breakthrough in the Brexit talks, which followed a June video meeting between Prime Minister Boris Johnson and the EU's Ursula Von der Leyen, and statements made by the UK side at the weekend just as trade discussions are about to resume. Not to mention the bearish technical trend on the charts.

"[GBP/USD] currently remains capped by its 20 day ma at 1.2549. This guards the 200 day ma at 1.2686 and we suspect it may struggle here. We favour near term recovery," says Karen Jones, head of technical analysis for currencies, commodities and bonds at Commerzbank. "Below 1.2278 we would allow for further slippage to the 50% retracement at 1.2112."

Deadlocked Brexit negotiations have limited enthusiasm for the Pound at the best of times and frequently been an outright burden during market turbulence, which could rise in the weeks ahead given that investors are growing concerned about the coronavirus again. Prime Minister Boris Johnson was reported at the weekend by The Sun newspaper to have reiterated a threat to walk away from the "accelerated" talks if they don't bear fruit while negotiator David Frost poured cold water on hopes of a compromise late last week.

Less important this week will be the second estimate of first-quarter GDP growth which is due out at 0700 in the UK on Tuesday and was declared as -2% in the first instance, and the June non-farm payrolls report from the U.S., which is published Thursday at 13:30 owing to the Independence Day holiday weekend.

Consensus looks for first quarter growth to be confirmed at -2% and for the U.S. economy to have added 3 million new jobs during June, which is seen pushing the unemployment rate down from 13.3% to 12.5%. Investors were wrongfooted by May's  2.5 million increase given the consensus was for a -7.7 million contraction, although the growing second wave of coronavirus in the U.S. might mean there's a bias to only react to a negative surprise this time. 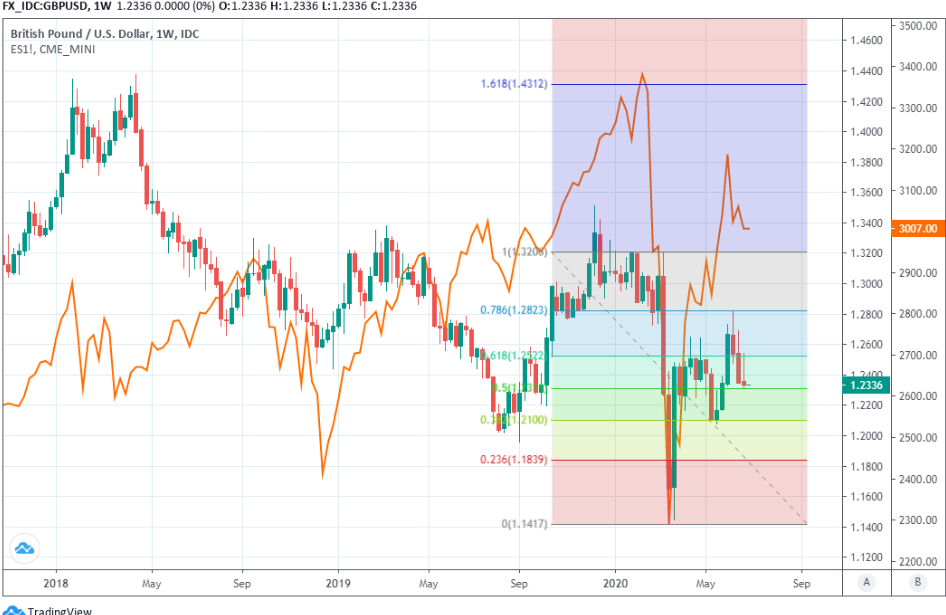 Above: Pound-to-Dollar rate at weekly intervals with Fibonacci retracements of March fall and S&P 500 (orange).