The Pound-to-Euro exchange rate starts the new week trading around the 1.10 area after enduring three consecutive weeks of declines, and studies show it risks further undeperformance ahead as Brexit talks renew in a market that may become increasingly inhospitable for 'risk currencies' like Sterling.

The British Pound slumped into the weekend as concerns about the U.S.-China trade relationship conspired with worries about what a second wave of coronavirus will mean for economic recoveries to spoil risk appetite, leading stock markets and some currencies including the Pound to weaken.

Losses brought the Pound-to-Euro rate into contact with the 50% Fibonacci retracement of the March recovery trend just below 1.10 and left it vulnerable to further declines in the short-term, with Sterling set to remain in a downtrend the entire time it's below 1.1184, according to technical analysts at Commerzbank.

"A bullish bias will be maintained while above the short term uptrend at .8941 and we look for the market to hold above here," says Karen Jones, head of technical analysis for currencies, commodities and bonds at Commerzbank, referring to EUR/GBP.

Advantage might remain with the Euro early in the new week if investors punish Sterling for the government's decision to contemplate retightening the 'lockdown' of Leicester City after an increase in new infections was detected throughout June. Government advisers have warned that infection numbers could rise in July as the economy reopens further, but they were still broadly equal last week and of late to those declared at the time the UK first went into 'lockdown.' 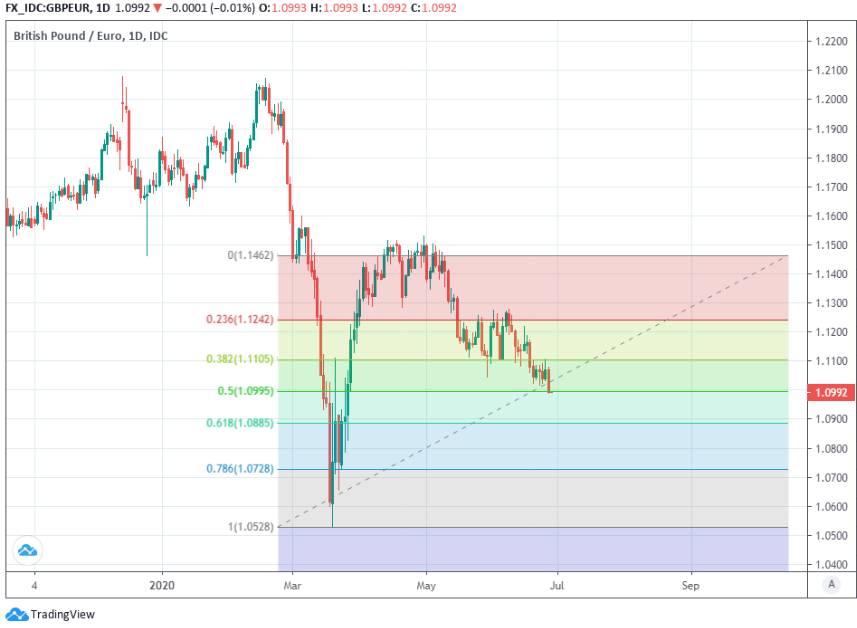 Above: Pound-to-Euro rate shown at daily intervals with Fibonacci retracements of March rebound.

Government ministers are contemplating the idea at a time when financial markets are growing concerned about second waves, or simply continued outbreaks of coronavirus in the U.S., where the 'epidemic curve' is re-steepening. Mexican, Indian and South African outbreaks are also still gaining momentum and threatening to re-steepen the global epidemic curve, with all placing a question mark over the fledgling global economic recovery.

The global epidemic curve is re-steepening at a point when European countries are seeking to reopen their borders and to get economies moving, and amid rising concerns about whether policymakers at HM Treasury and the Bank of England (BoE) might be stepping back too early.

Cutting off aid for the economy while it's mired in a crisis that still has the capacity to grow even larger yet, could create job losses that further drain spending from the economy and pose as an additional threat to the surviving jobs. HM Treasury is attempting to wind down its furlough scheme and says it will effectively sit on its hands while assessing what further support is necessary, while the BoE has cut the pace of its bond purchases by half.

"Chancellor Sunak hinted that the country's value added tax will not be cut soon as some had speculated of late and also highlighted that the government’s payroll support program will need to be unwound in the fall citing its fiscal unsustainability—despite concerns that an important share of small firms will be unable to support their employees without government aid," says Shaun Osborne, chief FX strategis at Scotiabank.

Prime Minister Boris Johnson is expected to announce an infrastructure spending plan Tuesday, although projects would need to be new and funded by genuinely new spending to move the dial favourably for the economic outlook and even then many could take years to get off the ground. A gimmick would see the Prime Minister ignored by Pound Sterling, at best. Meanwhile, Britain's Brexit negotiating team has indicated it'll stick to its guns on fishing rights and the so-called level playing field in renewed trade talks this week.

"We expect little progress during the summer months, keeping the uncertainty about UK growth and trade outlook in place and in turn making GBP one of the G10 FX underperformers. The deadline for the UK to request a transition period extension will pass next week, but the impact on GBP should be limited as the UK government already indicated it won’t opt for it," says Petr Krpata, chief EMEA strategist for FX and bonds at ING.

Deadlocked Brexit negotiations have limited enthusiasm for the Pound at the best of times and have frequently been an outright burden for the British currency in periods of market turbulence, which could rise in the weeks ahead given that investors are growing concerned about the global coronavirus situation again and stock markets are widely said to have become overextended of late. Sterling has followed those stock markets in near lockstep for months. 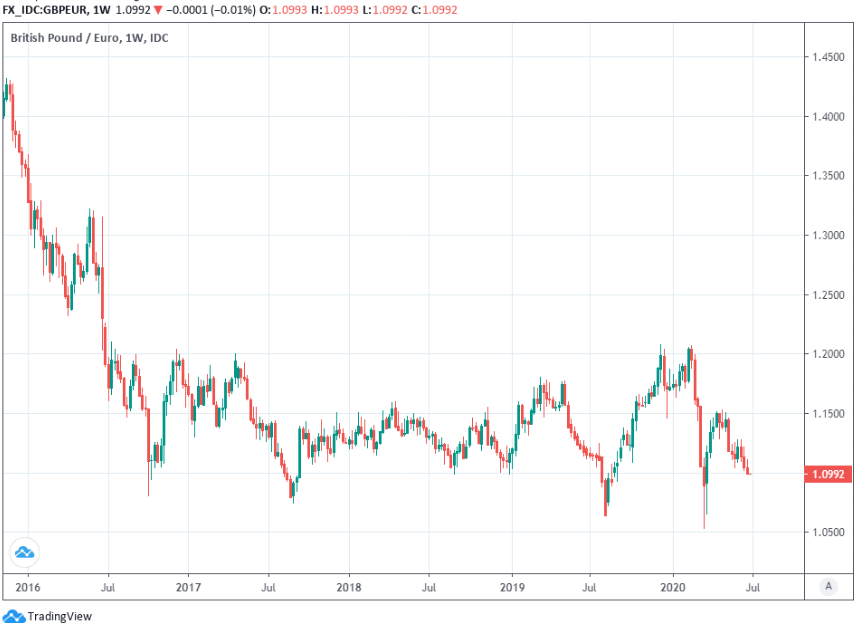 "Any deal will require the U.K. to “pool” its sovereignty, which many Tory MPs want to regain at all costs. The most likely scenario is that difficult decisions are postponed and the transition period is extended by one year, keeping a lid on sterling. Accordingly, we do not see a strong case for expecting sterling to move higher from here," says Samuel Tombs, chief UK economist at Pantheon Macroeconomics. "The U.K.'s large current account deficit must be offset by a steady stream of external finance for sterling to be stable. When those financial inflows dry up—just as they did in the 2008 financial crisis—sterling falls like a stone...interest rates will be stuck at the zero lower bound for several years, while Brexit will be an ongoing drag."

Prime Minister Boris Johnson was reported at the weekend to have reiterated a threat to walk away from the talks if later this year while Britain's new Brexit negotiator David Frost said after the last discussion "the fundamentals of being an independent nation are not a negotiating position," rejecting terms that would be "unprecedented" in trade agreements.

Frost appeared to pour cold water on hopes of a compromise late last week, but will go to Brussels hoping the "broad outline of a deal" can be ready by October, which is just two months before the transition period ends with 2020. The government will have to decide whether to request an extension of that transition, or resort to tariffs for a period.

"UK sovereignty, over our laws, our courts, or our fishing waters, is of course not up for discussion. Equally we do not seek anything which would undermine the integrity of the EU’s single market," Frost wrote in a Twitter post Thursday.

The European Research Group of Conservative Party MPs was reported in the Sunday Telegraph to have expressed their support for this position in a direct letter that also urged EU negotiator Michel Barnier "to listen when [Frost] says that certain EU demands are simply not going to work."

It's unclear if this reflects a bluff on the part of an under-fire Prime Minister or a change in the psychology guiding Downing Street although anything that's seen making a trade agreement less likely and an 'Australia deal' exit from the transition period more likely, would further burden Sterling in a market that could become increasingly inhospitable to risk assets in the weeks ahead.

"Sensitivity to trade tensions was evident from the Navarro blunder over the Phase 1 trade deal earlier this week. Pension funds are also expected to rebalance their portfolios in the coming weeks by lightening their equity holdings after the strong rally in 2Q," says Philip Wee, a strategist at DBS Group. "Some payback may be due for stocks and currencies in July."