The Euro was recovering fractional losses Thursday following initial estimates of first-quarter GDP from across the Eurozone and ahead of the April monetary policy decision and press conference from the European Central Bank (ECB).

Eurozone GDP growth fell -3.8% for the first-quarter, neatly in line with the Bloomberg consensus for an equivalent fall despite larger than expected declines reported by France and Spain earlier in the session. That's the largest Eurozone fall since long before the launch of the single currency and marks the beginning of a recession that's expected to be of historic proportions.

The estimate is the first of three so subject to revision and based on data from 16 of 17 member states.

"This is a flash estimate of GDP, released only 30 days after the quarter ends. We’re wary of larger revisions than in normal times, given that the downturn happened at the end of the quarter. That could make data collection for this flash estimate more problematic," says Bert Colijn, an economist at ING. "GDP will be even weaker in 2Q due to the lockdown impact, but as lockdowns are lifted a cautious recovery in activity will begin."

Above: Quarterly changes in GDP within the Eurozone.

The Eurozone figures suggest a lesser decline than that reported for the first quarter in the U.S., where GDP fell -4.8% and further than the -4% decline anticipated by the market, although this is because the U.S. reports quarterly GDP as annualised figures while Eurozone numbers are quarter-on-quarter.

The annualised decline implied on Thursday was far larger than -3.8% and the -4.8% seen across the pond. ING's Colijn suggests Eurozone numbers could be revised down substantially in May when the second estimate is out.

"Our initial estimate of a 11.7% q/q fall in Q2 GDP now looks optimistic, especially as the path to exit the lockdown remains tentative and gradual. This reinforces our expectation of a shallow recovery," says Francois Cabau, an economist at Barclays, referring to the French GDP data.

Meanwhile GDP in Italy, which began to 'lockdown' parts of the country in late February and was the first to impose a national shutdown on the economy, fell by -4.7% when markets were looking for a decline of -5%. 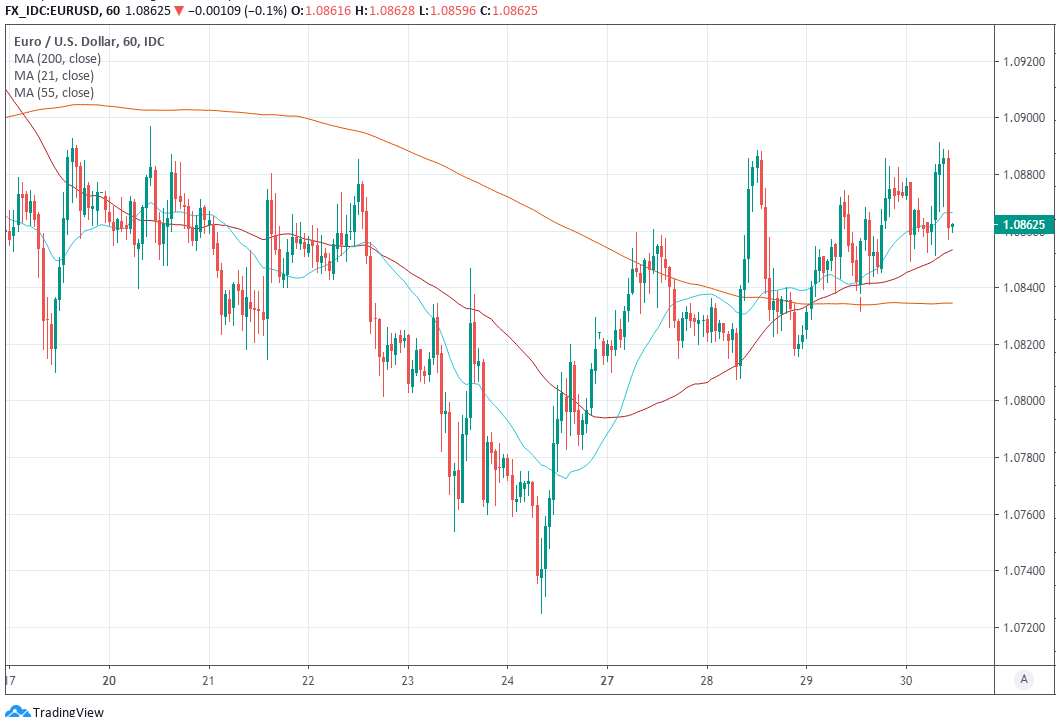 "There could be quite a lot of uncertainty around the growth numbers this time and the final numbers may also change more than traditionally. Thus, one should not read too much in today’s numbers," says Inge Klaver, an economist at Nordea Markets. "We have already seen first steps out of the lockdowns in all the biggest economies and that type of progress is assumed to continue in our baseline forecast of -7% for the whole 2020. However, the path of recovery is expected to be very gradual."

Job numbers revealed that Italian unemployment fell from 9.3% to 8.4% in March, when markets had anticipated an increase to 10.5%.

"Many of Europe's economies will be attempting to regain their lost output inside of what is essentially a fixed exchange rate regime. Italy recorded a bizarre-looking drop in its March unemployment rate to 8.4% from 9.3%, but this was driven in part by a sharp (301K) rise in "inactive workers"," says Stephen Gallo, European head of FX strategy at BMO Capital Markets. " Italy was struggling with a steady rise in inactive workers even before COVID-19."

Elsewhere, German unemployment claims rose 379k while the bloc-wide measure of joblessness gained only 0.1% to 7.4% for last month. German retail sales fell -5.8%, less than the -8.1% anticipated by economists.

"The most encouraging thing about the euro this morning, is that it has survived the economic data pretty well (so far)," says Kit Juckes, chief FX strategist at Societe Generale. "The ECB meets today and like the fed will stand ready to do more. But the best guide to EUR/USD will still be how relative growth expectations evolve and so far, consensus forecasts for 2020/2021 growth have simply adjusted more slowly in the US.....A big move higher in EUR/USD seems unlikely until the global growth outlook improves." 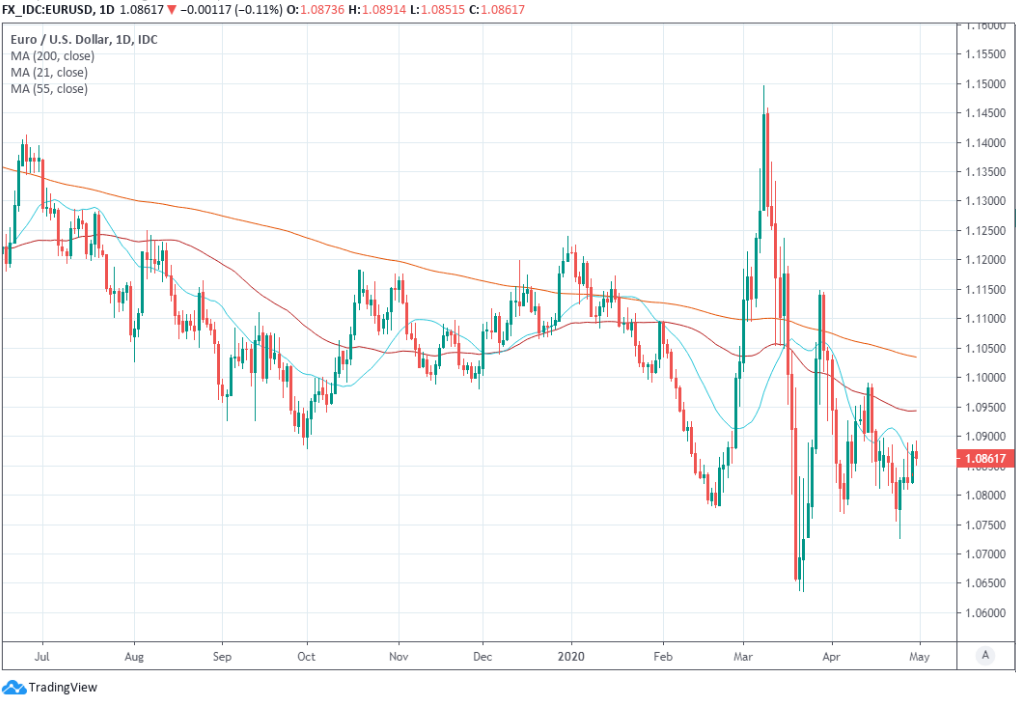 Thursday's economic data comes ahead of the ECB policy decision and press conference at 12:45 and 13:30 respectively, which will be important for the trajectory of the Euro-to-Dollar rate into month-end.

Many were looking for assurance that it'll stand behind the Italian bond market to contain a problematic increase in yields, which often move in the opposite direction to the Euro-to-Dollar rate during times of crisis, given continued absence of a European solution to the cost of the coronavirus containment effort that's stoked debt sustainability concerns across the 'periphery'.

"Without some form of joint support to ease the fiscal burden on peripheral countries such as Italy and Spain, the ECB will remain under pressure to support the bond markets given building concerns over debt sustainability. Those concerns are potentially one reason why the euro has failed to strengthen as much as other currencies against the US dollar over the past month even as the Fed has been easing policy more aggressively," says Lee Hardman, a currency analyst at MUFG.

Even more may be looking for such assurance now since Fitch cut Italy's credit rating on Wednesday, leaving it just one notch above the 'junk' threshold.

ECB assurances of action to preserve financial stability and support its constituent national central banks during a time of crisis might reign in Italian bond yields and subsequently lift the Euro in the process, but economists at Berenberg said Wednesday that there's a possibility the bank may instead stay mum so as not to take the pressure off Eurozone finance ministers charged with constructing something like a European fiscal response.

"More interesting is whether the ECB plans to move more aggressively to reduce sovereign bond yield spreads across the EU, a move that quickly gets the ECB into a political hot seat if it goes all-in. Such a move could support the euro, and the lack thereof could see further pressure on the single currency," says Steen Jakobsen, chief economist at Saxo Bank.