The Euro-to-Dollar rate outlook may have brightened now the Federal Reserve (Fed) is leaning against the greenback and German politicians are talking of post-coronavirus stimulus, just as the virus is losing momentum in Europe.

Investors sold Dollars Tuesday after China said it would lift a 'lockdown' of its people in Hubei province and some European countries reported a second consecutive decline in the number of new coronavirus cases despite increased testing, offering markets hope that the deadly viral pneumonia is being brought under control in some of the most affected areas to date. This has lifted the Euro-to-Dollar rate further off the lows seen last week.

The brighter mood follows unprecedented actions from the Fed that have stopped the runaway Dollar in its tracks after a fortnight of strong gains. Those actions are crushing U.S. yields, increasing the supply of Dollars and reducing the attractiveness of the currency to investors. Meanwhile, European efforts to limit the spread of coronavirus have shown signs they might be bearing fruit.

This, combined with the European fiscal response and U.S. coronavirus strategy could mean the seeds of a broader Euro recovery are now being sown.

“The large scale unlimited easing by the Fed announced yesterday should be eventually EUR/USD positive once the current market dislocations (the USD funding scarcity) fade,” says Chris Turner, global head of markets at ING. "We target EUR/USD 1.1500 level in 6 months." 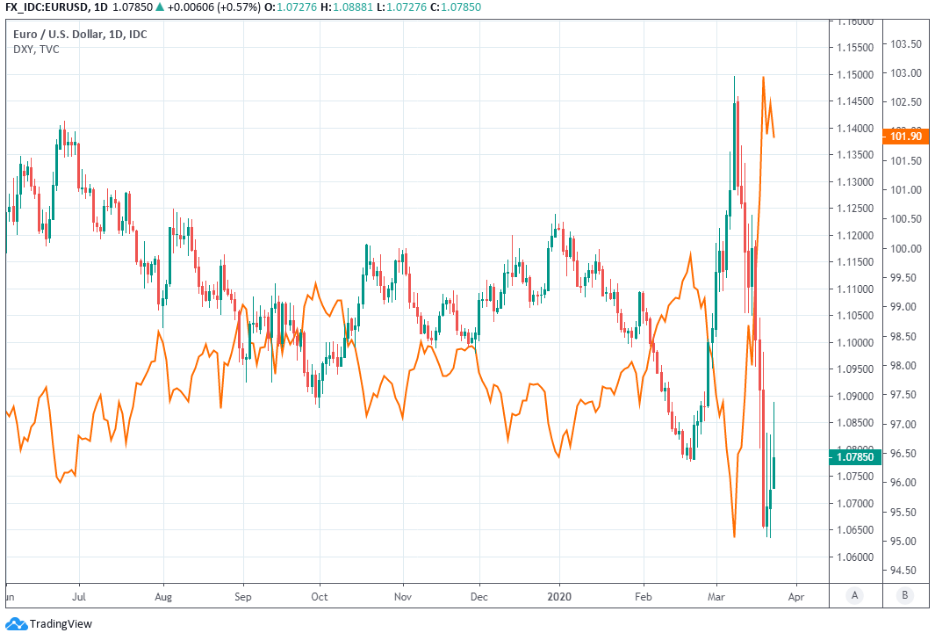 The Euro has unwound its earlier 6% rally against the Dollar after investors dumped financial assets of all stripes amid a great rotation into cash, the most liquid of all assets, which benefited only the world's reserve currency. But the the coronavirus outbreak in the U.S. is gathering momentum and just as parts of Europe appear to be getting a grip on their own epidemics amid 'lockdowns' of citizens in Italy, France and Spain, which could be significant for the outlook.

Furthermore, German Finance Minister Olaf Scholz said told Bild Tuesday the government will likely spend large sums to get the economy going once the coronavirus is contained. This is after ditching the 'debt brake' that has persistently prevented meaningful government borrowing, in order to facilitate a large aid package that will see €150bn doled out to struggling companies and households with hundreds of billions more offered in debt guarantees.

"The dollar is weaker across the board as markets respond positively to liquidity measures (the Fed's broadened swap programme is helping, with demand for dollars largely sated in the sterling and euro markets, though not yet in yen). Equity indices are higher, bond markets calmer. And economists are updating growth forecasts. Most have downgraded Eurozone growth forecasts by more than US ones. That's just another anchor holding the euro down. EUR/USD is till tracking these," says Kit Juckes, chief FX strategist at Societe Generale.

Post-containment stimulus could prove a gamechanger for the Euro if the German fiscal genie, once out of the bottle, proves too difficult to put back away. This would mark a break from Germany's austere past and if accompanied by a continued relaxation of EU rules that forced mandatory austerity upon many other members states in the post-debt-crisis years, then Europe's chronic economic underperformance could become a thing of the past.

European stimulus could be enough to influence the outlook for the EU-U.S. economic growth differential in favour of the Euro, which is tracked closely by the Euro, especially if the U.S. coronavirus containment strategy prolongs the battle against the viral form of pneumonia. The White House suggested Monday it wants to "reopen the economy" within two weeks, at the same time as the U.S. saw its largest single day increase in new coronavirus infections. Meanwhile, congressional lawmakers have again failed to agree on an aid packaged for U.S. companies and households, potentially aggravating an already severe situation for the economy.

"If the recent numbers are correct, and sustained, and then confirmed by the deaths data, they will mark the beginning of the turning point in Europe's battle," says Ian Shepherdson, chief economist at Pantheon Macroeconomics. "U.S. deaths rose sharply yesterday; that's inevitable at such an early stage in the outbreak; much worse lies ahead. New York City now has 1,521 cases per million, far above Hubei's 1,185—though likely below the peak in Wuhan city— and the number of cases is doubling every two days."

U.S. infections rose more than 13k Monday, the largest increase so far, which has translated into a steepening epidemic curve and could soon see it named the epicentre of the pandemic. The epicentre was still Europe on Tuesday, although Monday brought the first back-to-back decline in the number of new cases reported across the continent just before President Donald Trump told the press the "cure cannot be worse than the disease".

The White House's remarks, since echoed by National Economic Council director Larry Kudlow, suggest a half-hearted U.S. commitment to the 'social distancing' and 'lockdown' measures that brought the Chinese outbreak under control and which appear to have worked in Europe.  And with the U.S. curve already steepening and the supply pool of Dollars deepening, the downside risks to the greenback are mounting given the epidemic threat and actions of the Fed.

However, the unwinding of the Euro's February-to-March rally has done damage to the outlook as far as technical analysts are concerned. After snapping a 35-year uptrend last week the Euro-to-Dollar rate is now in danger of a descent toward parity unless it can recover the 1.1085 level that coincides with the 200-day moving-average of prices. Failure to recover that level would see the Euro descend to 1.0457, then 1.0340 and potentially; parity with the Dollar. 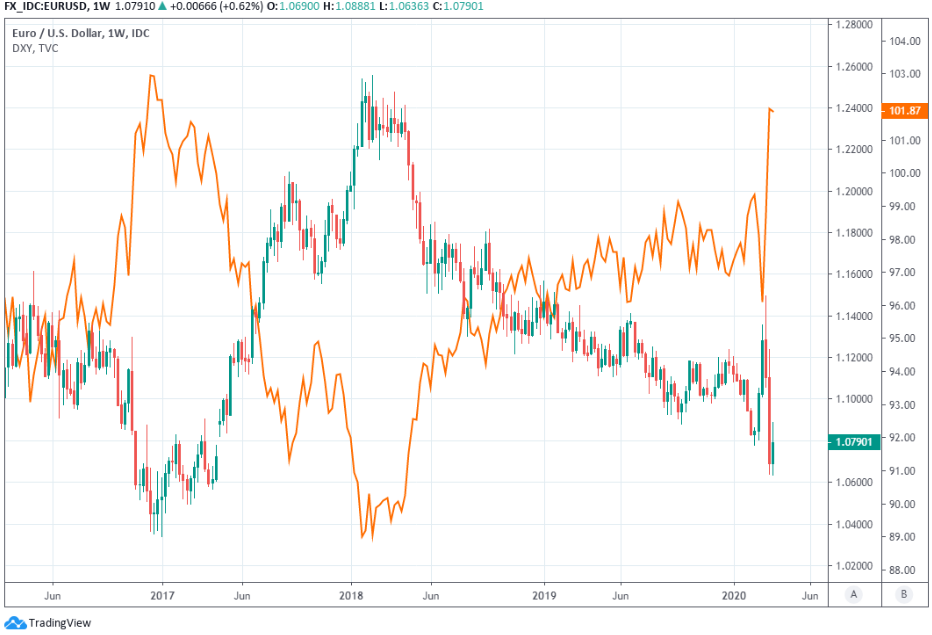