The Dollar was seen trading lower on Monday, March 23 following the announcement of a raft of initiatives by the U.S. Federal Reserve to support the U.S. economy, of which the headline measure was the introduction of an unlimited programme of quantitative easing.

The Dollar retreated and global stock markets recovered after the Fed all but abandoned its self-imposed limit of $700BN in asset purchases under its quantitative easing programme and said it would pump as much money as was required into the economy.

The Fed will now begin conducting open-ended quantitative easing - as the Bank of Japan currently does - in the Treasury and MBS market in, "amounts needed to support smooth market functioning and effective transmission of monetary policy".

The deluge of fresh Dollars - which come on top of other measures announced by the Fed last week - have all aided in easing the liquidity crunch in U.S. Dollars on global markets that saw the currency spike in value in the first half of last week.

The U.S. Dollar had "become the most desired monetary instrument surpassing traditional safe havens like US Treasuries and even Gold meaning that those that have it have greatly increased their bargaining power. Furthermore, the now inevitable recession is going to mean that many loss-making businesses will need cash to see them through," says Richard Windsor, an independent research analyst.

But the promise of hefty liquidity has meant the premium that was placed on the Dollar last week has now faded somewhat, hence the declines in the currency seen in the wake of the latest Fed measures. 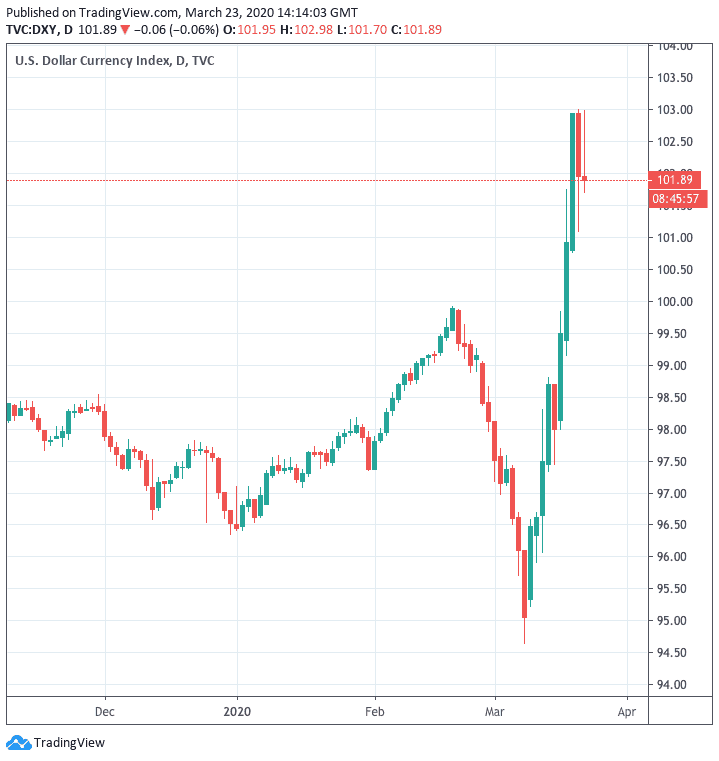 "Jerome Powell and the FOMC have finally had their “whatever it takes moment” and promised open ended asset purchases aimed at beating the U.S. yield curve and financial conditions into submission. The move makes sense based on what we know about QE, which is that the purchases need to be huge, timely, and unconditional for optimal effect. With financial conditions still in a tailspin despite last week’s global monetary bazooka volley, the Fed has decided to once again go big and go early," says Ranko Berich, Head of Market Analysis at Monex Europe.

The latest moves by the Fed confirm the world's most important central bank appears to be getting a grip on the financial turmoil suffered since markets took fright of the rapidly spreading coronavirus epidemic in late February.

"The measures are expansive and aggressive in every sense. The pace of the “QE classic” element will be a scorching $75 billion of treasuries and $50 billion of mortgage backed securities a day this week. In addition to expanded QE, the Fed has taken a host of additional measures. These include steps to allow it to purchase corporate debt, including reviving the crisis-era Term Asset-Backed Securities Loan Facility," adds Berich.

Last week a rampant Dollar was hosed down after the Fed extended currency swap agreements to a further nine central banks in an apparent effort to contain a surge in the greenback that’s been so severe it could pose an additional threat to a global economy that’s already cratering amid the coronavirus pandemic.

These compliment existing swap lines that provide the Bank of Canada, European Central Bank, Swiss National Bank, Bank of England and Bank of Japan with access to a large supply of Dollars upon request without those banks having to enter the market. Central banks disclose little about their day-to-day activities so it’s not possible to determine with certainty whether the swap line extension explains part of Friday’s global riposte against the Dollar.

An FX swap is an agreement to buy one currency (Dollars) with another off-market and then sell it back to the counterparty on a prearranged date at a pre agreed price. These transactions would enable other central banks to sell large clips of the runaway Dollar on the open market and buy back their domestic currencies, lifting the domestic currencies against the Dollar in the process. Doing this enables those central banks to counter the inflation and growth threat posed by currency devaluation without burning through precious foreign exchange reserves.

And it might also lead other central banks to do the Fed a favour while paying for the privilege, seeing as a rapidly strengthening Dollar could hurt an already-in-trouble U.S. export sector and further stoke the ire of President Donald Trump, who’s ever breathing down the bank’s neck

"The Fed certainly had plenty of justification for stepping its support up another notch. Despite last week’s wave of easing measures from global central banks and governments, US and global financial conditions continued to tighten, and demand for US dollars remained very high. What the FOMC is seeking to do here is maximise the psychological impact of QE, which will hopefully flatten the US yield curve and eventually improve risk appetite, preventing a credit crunch and financial crisis," says Berich.

In addition to effectively making quantitative easing unlimited, the Fed went a step further today and announced the establishment of two new facilities aimed directly at the corporate bond market:

1) The Primary Market Corporate Credit Facility (PMCCF): this will be open to investment-grade companies and will provide bridge financing for a period of up to four years.

Borrowers may elect to defer their interest and principal payments for up to six months under the terms and conditions governing the PMCCF.

"In terms of mechanics, this facility will use funds from the Governments Exchange Stability Fund (ESF) of up to USD$30.0bn, and the ESF will then make equity investments in an Special Purpose Vehicle (SPV) set–up by the Fed," says Ian Pollick, FICC Strategy at CIBC Capital Markets. "Think of this as a tool aimed at the primary corporate bond market."

2) The Secondary Market Corporate Credit Facility (SMCC) is aimed at the corporate bond market and will facilitate the smooth functioning of liquidity in this crucial market.

"The SMCC will directly purchase corporate bonds (investment-grade) in the secondary market and U.S.-listed ETFs. Again, using the Treasury’s ESF, the government will make an equity investment in an SPV created by the Fed," says Pollick.

The Fed also announced that they will now allow the Money Market Mutual Fund Liquidity Facility (MMLF) to include a wider range of securities, specifically including municipal variable rate demand noted (VRDNs) and bank certificates of deposit.

The Fed has also re-opened the Term Asset-Backed Securities Loan Facility (TALF), and it will enable issuance of ABS backed by student-loans, auto-loans, credit-card loans and, loans guaranteed by the Small Business Administration (SBA).

"The Fed and the Treasury have introduced up to USD$300BN in new financing aimed at supporting the flow of credit to employers, consumers and businesses. In concert, we see this morning’s announcement as a very important step in alleviating building pressures in select parts of the fixed-income and funding markets," says Pollick.