The impact of the global coronavirus pandemic is expected to see the U.S. economy shrink 17.7% in the second quarter of 2020 and lead to a surge in unemployment, according to economists at independent research house TS Lombard.

According to new research from TS Lombard, the negative impact to the economy from the viral outbreak will last beyond the second quarter and see third quarter growth also shrink, thereby fulfilling the technical requirements for a recession to be declared.

The 17.7% shrinkage in the second quarter will be followed by a 7.3% decline in economic growth in the third quarter.

"These estimates are, of course, a best guess – there is no historical precedent in the U.S. against which to model," says Steven Blitz, Managing Director, Global Macro and Chief US Economist at TS Lombard. "Our purpose in producing these numbers is to convey that this severe downturn does not simply reverse once social distancing begins to narrow – which will happen only slowly."

The United States has imposed 'social distancing' measures on its citizens in order to slow the spread of the coronavirus which has now infected 43K people, with more than 500 U.S. citizens dying to date.

Several more states have imposed shutdowns over the past two days, placing about 100 million Americans under social restrictions.

"Social distancing has shut down industries that account for about 30% of private-sector jobs," says Blitz. "Food services, recreation, air travel and casinos alone account for 11.6% of private sector employment and 8.4% of personal consumption expenditures. We expect some of these businesses to reopen during the late second quarter, but we believe the pace is going to be slower than that anticipated by those forecasting a big Q3 bounce." 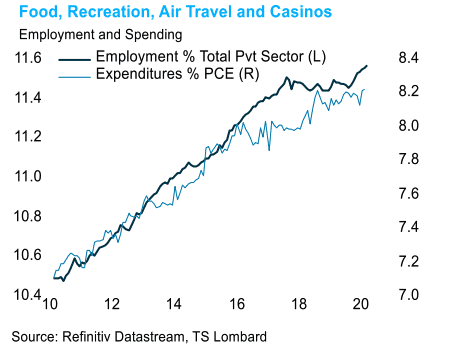 Blitz warns there is no obvious "all clear" signal that will see economic activity surge back, "and the longer the shutdown goes on, many more of these shuttered small businesses may not reopen at all".

GDP is forecast by Goldman Sachs to fall by nearly 10% in April, while the economic recovery will be slow with the negative impact of the coronavirus expected to fade "only gradually in later months," says Jan Hatzius, Economist at Goldman Sachs in New York.

The forecast by the St. Louis Federal Reserve whose President James Bullard said he sees a -50% GDP reading for the quarter.

The impact of the economic slowdown is expected to translate into higher unemployment rates and Goldman Sachs estimate a 5.5% increase in the U3 unemployment rate to a 9% peak in coming quarters.

TS Lombard project the unemployment rate jumps to 10.6% in April, "this means we see 12 million people losing their jobs in the first round, but this is not necessarily going to be the high mark for this down cycle," says Blitz.

Based on this initial jobless claims data, TS Lombard says it looks like the unemployment rate has already jumped to the 5.5%-6.0% range. 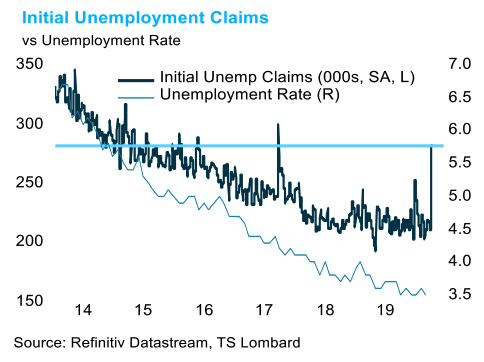 The negative economic impact posed by measures to contain the coronavirus have prompted U.S. President Donald Trump to consider lifting social distancing measures in order to allow the economy to get back up to speed.

“We cannot let the cure be worse than the problem,” Trump said on Monday, adding he would make a decision on overturning the measures in 15 days.