The Euro-to-Dollar rate spiked again on Friday amid fresh coronavirus related pandemonium in financial markets ahead of the weekend, taking out technical resistance near the 1.12 handle and setting course for fresh highs in moves that are likely to alarm the European Central Bank (ECB).

Europe's single currency advanced again Friday, trailing only the safe-haven Japanese Yen and Swiss Franc, as stock markets appeared on course for their steepest losses yet in the coronavirus crisis as investors responded to signs the disease is spreading with increased momentum in the U.S. and Europe.

Major equity benchmarks had declined more than 3% at their lowest ebb and oil prices were down more than 5% while gold gained 0.75% and 10-year bond yields hit fresh record lows.

The Dollar and Pound were laggards among major currencies due to concerns about domestic outbreaks, with the Euro dodging a bullet thanks to the 'funding currency' status that saw it sold heavily in better times as investors took advantage of super low interest rates to finance bets on higher-yielding assets in the emerging markets while funding other investments elsewhere.

Pound Sterling Live reported since early in February that the Euro could outperform if coronavirus concerns worsen, after it was lifted in late January amid market pandemonium as the viral pneumonia disease brought China's economy to its knees. The single currency has risen more than 3% against the Dollar since then, in a move so sharp that analysts now see it causing the out-of-ammunition ECB yet another headache - this time to the Euro's advantage. 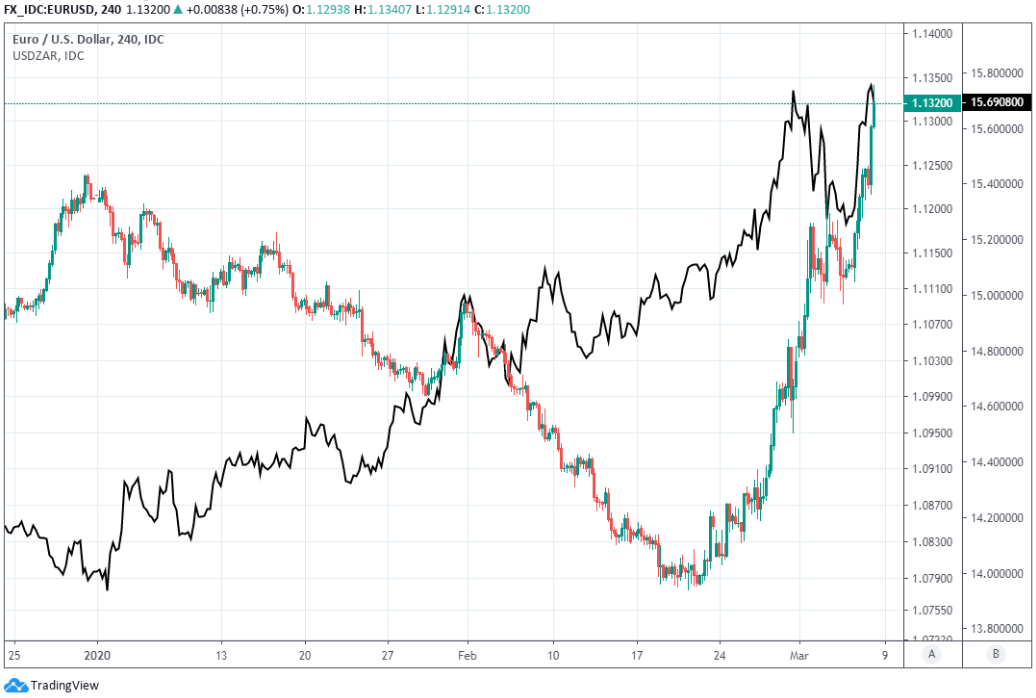 "Poor liquidity and another downdraft in USD yields vaulted the pair through 1.1300 during the London morning, and FX investors that have been on the right side of this may well be able to close out their books at the end of Q1 and simply retire. For many others, however, the only options are to watch this play out and to adapt. This appreciation of the EUR will bring next week's ECB rate decision into even sharper relief, and the alarming speed of the move means absolutely no "tools" are entirely off the table," warns Stephen Gallo, European head of FX strategy at BMO Capital Markets.

Europe's single currency has now broken above the 1.13 handle against the Dollar and with global business facing unprecedented disruption as the coronavirus takes hold in the world's major economies, as well as financial centres, investors who'd recently been betting against the Euro now have to confront the possibility that the ongoing meltdown in the markets continues for a while yet. And that will likely mean an even higher Euro as higher risk bets elsewhere are liquidated.

Position liquidation can keep lifting the Euro for a while yet but gives little indication of where the Euro-to-Dollar rate could feasibly end up as a result, although some technical analysts studying the charts have got their eyes on the 200-week moving average located around 1.1346 and are tipping1.1950 as a viable medium-term target now the Euro has bounced so convincingly off what were multi-year lows just a few short weeks ago. 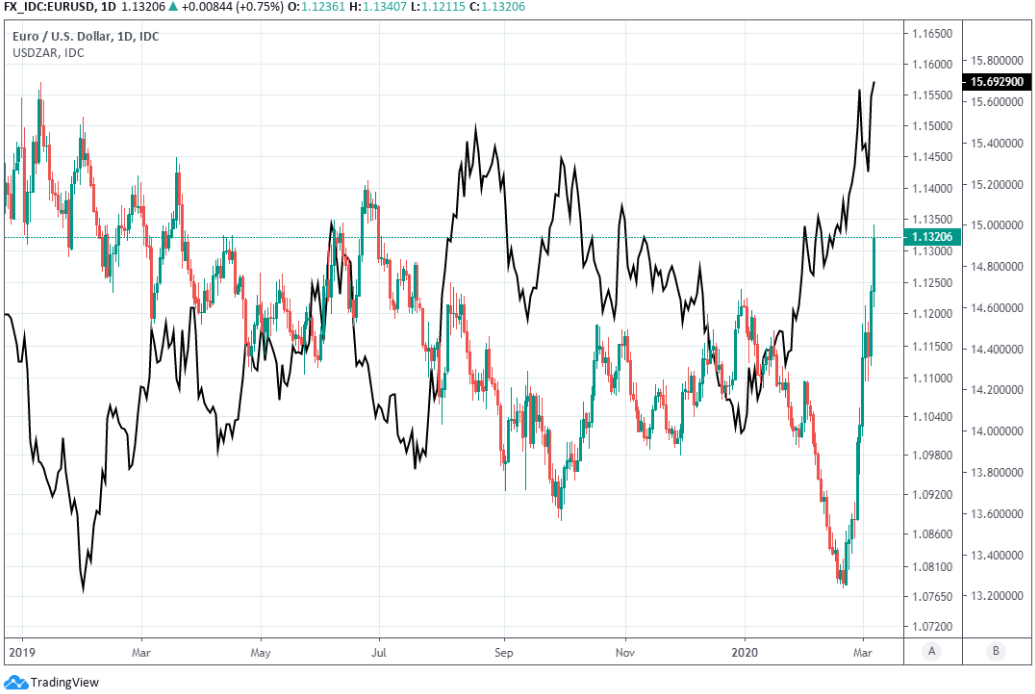 "The ECB was effectively on autopilot in the baseline, until the strategy review at the end of the year, keeping the EUR weak in the meantime, but with risks for a hawkish surprise after the strategy review (or toward the end of the policy review, if ECB officials would start preparing the ground) that would strengthen the EUR. However, as the market started pricing CoV risks, and particularly since the sharp equitymarket correction and the pricing of Fed cuts, the ECB being on hold has been positive for the EUR," says Athanasios Vamvakidis, head of FX strategy at BofA Global Research.

The Euro's strength now risks exacerbating the chronic disinflationary condition of the Eurozone economy seeing as a higher exchange rate can reduce import costs as well as consumer prices, which won't be at all welcome at an ECB that's already cut its deposit rate far below zero in the hope of stoking the faster that's necessary for it to sustainably deliver upon its target to ensure inflation of "close to, but below 2% over the medium term".

Next week's interest rate decision is now what analysts call "live," especially after the Bank of Canada and Federal Reserve cut their interest rates by 50 basis points to 1.25% respectively this week. Although whether or not a rate cut, or any other policy measure, will be enough to counter the Euro's ascent remains to be seen. The battle against currency strength will certainly be made more difficult by the ECB's lack of policy ammunition, which is now to the Euro's advantage. The ECB will announce its March interest rate decision next Thursday at 12:45 London time. 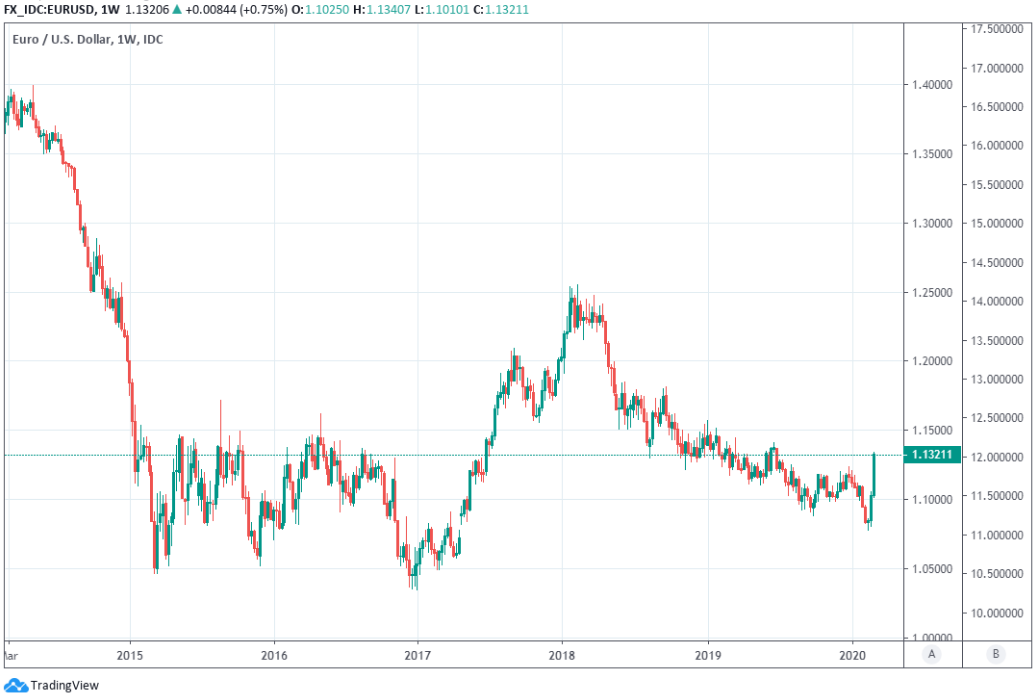