- Tips EUR losses in short-term but sees recovery by end-2020.

The Euro's newfound stability won't last for long if the latest Barclays forecasts are anything to go by because analysts at the bank are tipping the single currency for a steady slide to a near-two-decade low next year.

Europe's single currency steadied Wednesday after a volatile start to the new week but is tipped by Barclays to fall steadily throughout the next year, hitting its lowest level since just before the 2003 invasion of Iraq some time in late 2020 in a move that is expected to leave it sitting not far above parity.

Risks to the Eurozone economy are expected to mount in the final months of the year while growth on the continent is seen remaining lacklustre up ahead even in Barclays' best case scenario, which is a problem for the Euro because the European Central Bank (ECB) is now seen as having ran out of scope to continue supporting the economy with its interest rate policy.

"We expect the US economy’s outperformance to continue, even as it slows from a higher activity level, with an accommodative Fed helping to extend the expansion. In contrast, further ECB rate cuts are unlikely to stimulate the economy without hurting bank profitability," says Nick Sgouropoulos, a strategist at Barclays. "Constrained on policy options, we think the EA economy will continue to underperform, requiring a weaker currency as a result."

Barclays forecasts the Federal Reserve (Fed) will cut its interest rate more than the ECB in the months ahead but not because the U.S. economy is in need of more assistance than Europe's but instead due to the fact that Frankfurt is believed to have reached the point where it won't help the economy to cut rates any further. Some say that doing so now would reduce lending to the real economy by hurting bank profitability.

Sgouropoulos sees two more cuts taking the U.S. Fed Funds rate down to 1.5% before march 2020 while the ECB is tipped to cut its deposit rate by only a meagre 10 additional basis points, taking it to -0.70%, during that time. Under almost any other circumstances the Euro might be expected to benefit from a lesser rate cut but this time the absence of a more significant stimulus for the ailing Eurozone economy is expected to risk an even more protracted period of weak economic growth. 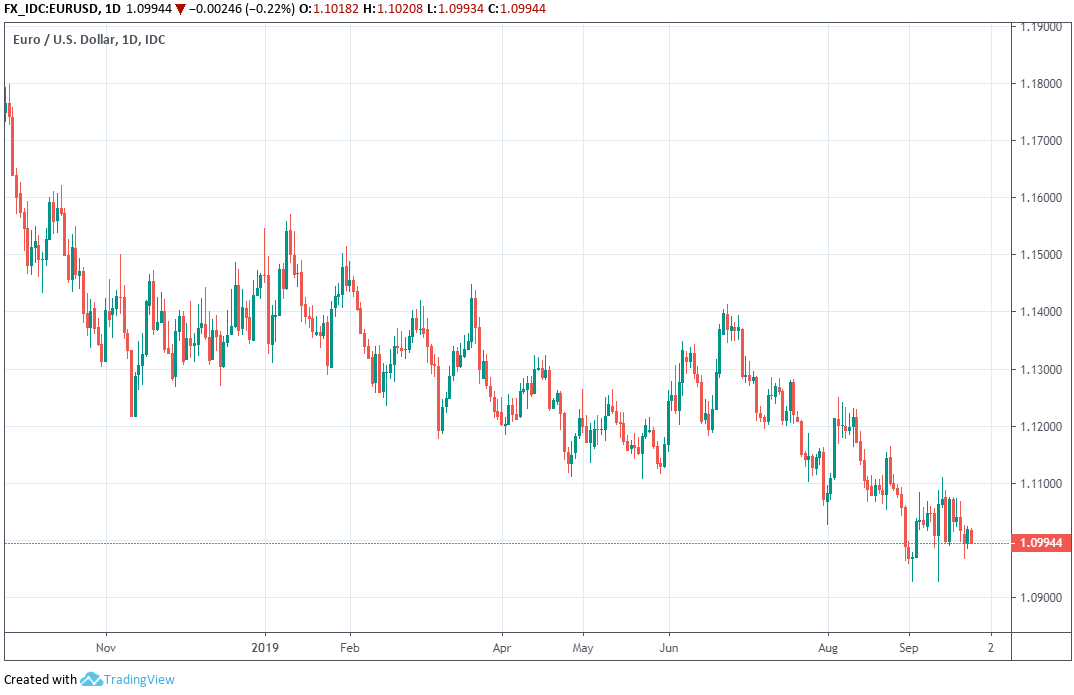 "We envision trend EURUSD depreciation over the coming year, with the pair breaking the previous cycle-lows to reach 1.03 by Q3 20," Sgouropoulos says. "Our expectation of a global slowdown, continued US-China trade tensions and a no-deal Brexit, should all weigh further on the single currency but a slower grind lower is likely if they do not materialise. Lastly, US tariffs on EU cars, while a low probability event, would also weigh heavily on the single currency."

The U.S.-China trade war has hurt Germany and Europe more so than it has the two protagonists in the last year while the impact of the conflict on the Eurozone growth and inflation outlook was a key driver behind the September ECB decision to cut the deposit rate further below zero to -0.60% and to restart the quantitative easing program it only just wound up in December 2018.

IHS Markit PMI surveys for September released this week were just the latest to flag a likely third-quarter recession for Germany, although this time they also suggested the Eurozone is at risk of a deeper slump in the months ahead. The German manufacturing PMI fell to its lowest level since mid-2009, a short time after the global financial crisis, while the composite index that measures both services and manufacturing output posted its steepest fall for seven years.

President Donald Trump criticised Chinese trade policy in a speech at a United Nations gathering Tuesday, prompting unease in markets that had until then allowed themselves to believe that talks set to take place between both sides in October could result in a deal that at least temporarily suspends the 18-month long trade war between the world's two largest economies. Sgouropoulos says the tariffs implemented to date are unlikely to be rolled back any time soon. 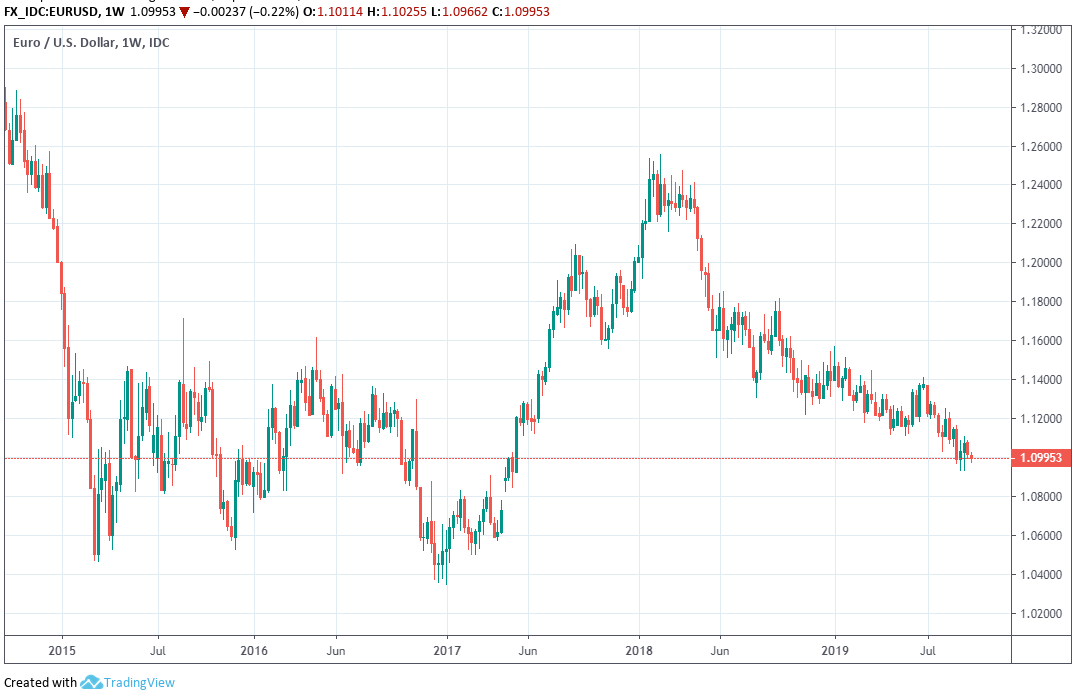 Barclays forecasts the Euro-to-Dollar rate will end the year at 1.09 but that it'll then fall to 1.05 by the end of June 2020 and 1.03 in September next year. However, the bank is not alone in anticipating more weakness ahead for the single currency because Bank of America has also warned of losses ahead.

"The market has been focusing on the US-China trade talks, but we are also concerned about the US-EU trade talks. The market is underpricing the negative implications of a no-deal Brexit for the Eurozone," says Athanasios Vamvakidis, a strategist at Bank of America Merrill Lynch.

Like Sgouropoulos, Bank of America's Vamvakidis is warning clients of the risks posed to the Euro by President Trump's tariffs as well as a possible 'no deal' Brexit. He says both of those threats would have a significant impact on the Euro area economy but are being underappreciated by the market.

The German and Eurozone economies could find themselves contending with an October 31 'no deal' Brexit, if one happens, just as a 180-day delay to a new 25% U.S. tariff on imports of cars from Europe is expiring.

President Trump announced and then delayed that tariff back in May pending the outcome of talks aimed at reducing EU levies and opening up its agricultural market to U.S. farmers, but could seek to use the looming Brexit deadline as well as threat of his own tariffs to encourage EU concessions in the final quarter. 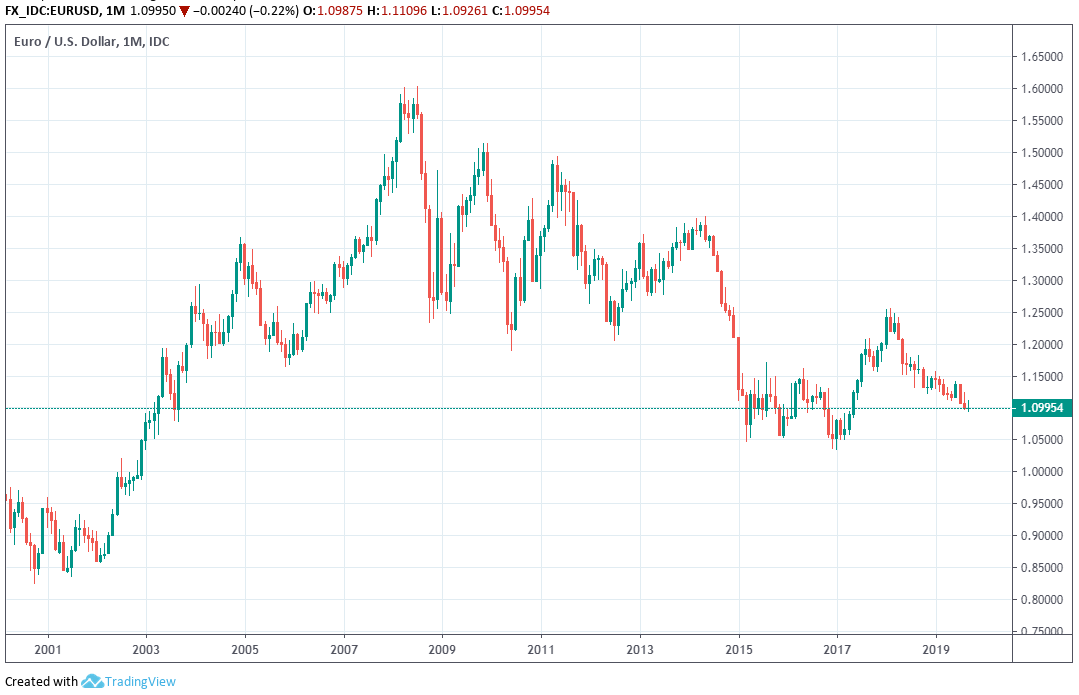