- No signs of improvement on the horizon for German manufacturing

The Euro came under selling pressure at the start of a new week following the release of fresh data from the Eurozone's largest economy that suggested an ongoing slump could be worsening, and the prospect for a turnaround in fortunes remains elusive.

German Manufacturing PMI read at 41.4 in September, down on August's 43.5 and well below analyst expectations for a recovery to 41.4.

The PMI is a survey of activity amongst the economy's purchasing managers and is widely held to be the most timely and accurate insight into the condition of the economy's various sectors. A reading above 50 indicates expansion, a reading below 50 indicates contraction.

The Composite PMI - which takes into account all other PMI readings to give an overall assessment - read at 49.1, below the 51.7 economists had been expecting.

The services component of the German economy might therefore provide some support, but the deep slump in manufacturing suggests the economy could well record a recession. The economy shrank in the second quarter of 2019, and a subsequent quarter of contraction would mark a technical recession.

"Another month, another set of gloomy PMI figures for Germany, this time showing the headline Composite Output Index at its lowest since October 2012 and firmly in contraction territory," says Phil Smith, Principal Economist at IHS Markit. "The economy is limping towards the final quarter of the year and, on its current trajectory, might not see any growth before the end of 2019."

"These headlines are ugly, and more-or-less confirm that the German economy entered recession in Q2 and Q3. Uncertainty over global trade, and the tariff stand-off between China and the U.S., are now driving a deterioration in German manufacturing, which is as bad as during the 2008 crash," says Claus Vistesen, Chief Eurozone Economist at Pantheon Macroeconomics.

The Euro-to-Dollar exchange rate reacted to the news by falling, at the time of writing the pair is quoted at 1.0972, having been above the 1.10 mark ahead of the release. 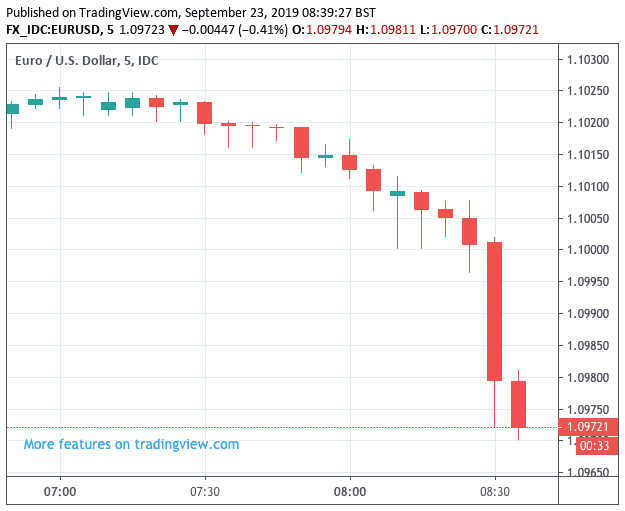 "Under the current circumstances, a sustained appreciation of the Euro is virtually inconceivable. Without the German government's willingness to adequately support the economy, the currency tends to remain rather discouraged," says Marc-André Fongern, FX and Macro Strategist with MAF Global Forex.

The Euro-to-Pound exchange rate also suffered weakness, but the losses were more contained with the pair going from 0.8827 to 0.8813 following the release, before recovering back to pre-release levels.

This suggests to us the Pound is largely in control of this pair, and Brexit sentiment will likely be the main driver going forward.

For Germany, the outlook remains troubling.

"The very low levels in manufacturing continued and failed to show any signs of a rebound. The level of new orders below 40 is indeed very worrying and does not even show signs of a rebound. Furthermore, the downward trend in the service sector continued as well and employment PMIs suggest that the so far strong labour market is facing more downward pressures," says Tuuli Koivu, economist at Nordea Bank.

For the Euro, much will depend on the response of the German government and European Central Bank to the slowdown.

"The weak data support our expectations that the ECB will have to ease monetary policy again in December. We expect another rate cut and an expansion of the asset purchase programme," says Koivu.

The ECB in September launched a fresh bid to defend the Eurozone from a global economic slowdown that's already put Germany on the doorstep of recession, and following speculation that U.S.China trade deal could be close.

The ECB cut its deposit rate, which is the rate it now charges (used to pay) banks that park money with it overnight, by 10 basis points to -0.50% in line with market expectations. This means the ECB effectively, but in a roundabout way, will pay governments and companies even more in return for them borrowing money from the market. Rates on 'main refinancing operations' and the 'marginal lending' facility were unchanged at 0% and 0.25% respectively.

The ECB also said it would buy €20bn of European corporate and government debt per month from November 01, without specifying an end date for the program.

A side-effect of expansionary monetary policy at the ECB is a lower-for-longer Euro as the increase in supply of Euros to the market keeps its effective value under pressure.

"EUR/USD traders are again staring into the interest rate gap and taking price away from the long-term daily trend resistance line, today at 1.1079. A widening of the 10-year bond yield gap between U.S. and Germany early Monday was tripping the EUR up from levels around 1.1025 and dropping EUR/USD below last week's 1.0990 range base," says Peter Stoneham, an options market analyst with Thomson Reuters.

"The carry environment will continue to lean on EUR/USD. The longer-term trend targets levels under 1.0900," says Stoneham.