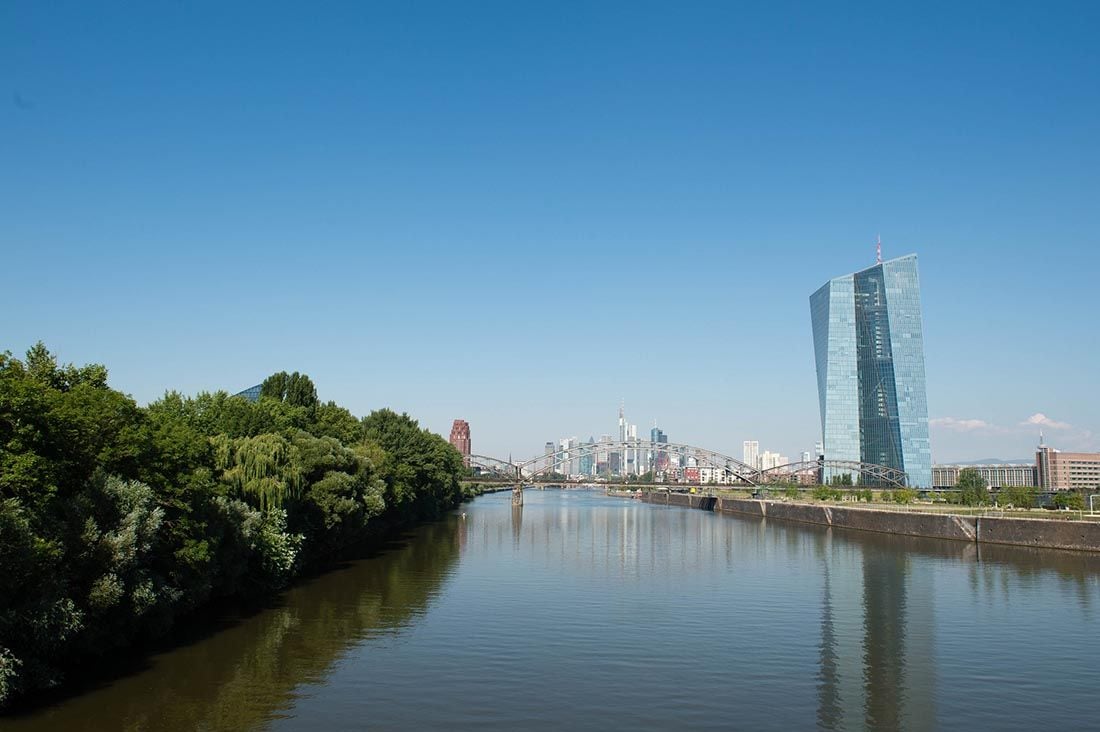 - Rates seen pinned to floor for long, long time, weighing on the EUR.

- But ECB now fired last bullet and may have birthed a bottom in EUR.

The Euro whipsawed in volatile swings Thursday after the European Central Bank (ECB) launched a bid to defend the Eurozone from a global economic slowdown that's already put Germany on the doorstep of recession, and following speculation that U.S.China trade deal could be close.

The ECB cut its deposit rate, which is the rate it now charges (used to pay) banks that park money with it overnight, by 10 basis points to -0.50% in line with market expectations. This means the ECB effectively, but in a roundabout way, will pay governments and companies even more in return for them borrowing money from the market. Rates on 'main refinancing operations' and the 'marginal lending' facility were unchanged at 0% and 0.25% respectively.

European bond investors were in the money too after the ECB said it will buy €20 bn of European corporate and government debt per month from November 01, without specifying an end date for the program.

Outgoing President Mario Draghi said the bank will buy corporate bonds whose yields fall below that of the new -0.50% deposit rate, presumably because it's opted not to change self-imposed rules that mean it's rapidly running out of government bonds that it can buy.

"The joke in the Q&A that there was unanimity that fiscal policy should become the main tool to help the economy is a simple admission of the truth - Mr Draghi may be able to find a trick or two up his sleeve, but they won't be new, and definitely won't be magic. The euro seemed to turn around almost as soon as the joke was delivered," says Kit Juckes, chief FX strategist at Societe Generale. "The euro's fall is nearly, but not quite, over. The dollar's long rally is likewise nearly, but not quite done." 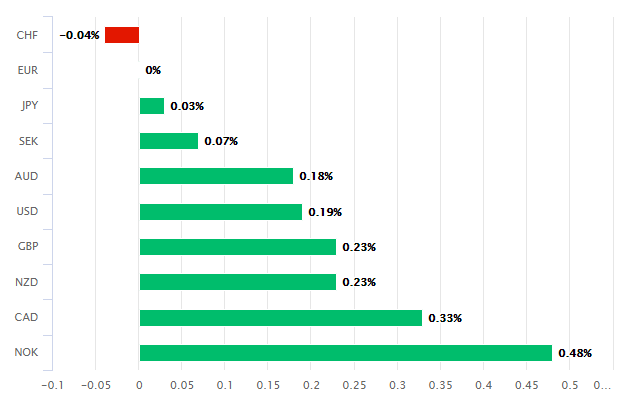 "EUR-USD saw some spectacular ups and downs after today's ECB decision. But finally the market got it right: This ECB decision was not EUR-negative. If anything, it contained subtle EUR-positive aspects," says Ulrich Leachtmann, head of FX strategy at Germany's Commerzbank. "The "bazooka risk" is of the table (for the time being) and Draghi implicitly admitted that the ECB is approaching the end of its monetary policy means."

The ECB says interest rates will remain at current or lower levels "until it has seen the inflation outlook robustly converge to a level sufficiently close to, but below, 2%...and such convergence has been consistently reflected in...inflation dynamics." This could be a covert move to the kind of 'symmetric inflation target' the bank previously hinted that it was exploring.

Mario Draghi also issued a plea for more spending from Eurozone governments that still have room to spend without breaching the EU framework of budget rules, as he seeks to breath new life into the bloc's economy in the hope the bank will one day be able to meet its ever-elusive inflation target of "close to but below 2%". The ECB has missed its targets for years but is now panicking it could miss them for even longer because of the impact the U.S.-China trade war is having on the global economy.

"So openly begging for immediate fiscal support can only be interpreted as an implicit confession that the ECB is near the end of its monetary policy means. Many (at least: me) had this impression before. But it is clearly more convincing that now even Draghi himself admits it (albeit only implicitly). The more this view is absorbed by the market, the more EUR-USD should be able to gain - as the Fed, on the other side, still has much ammunition left," Leuchtmann says. 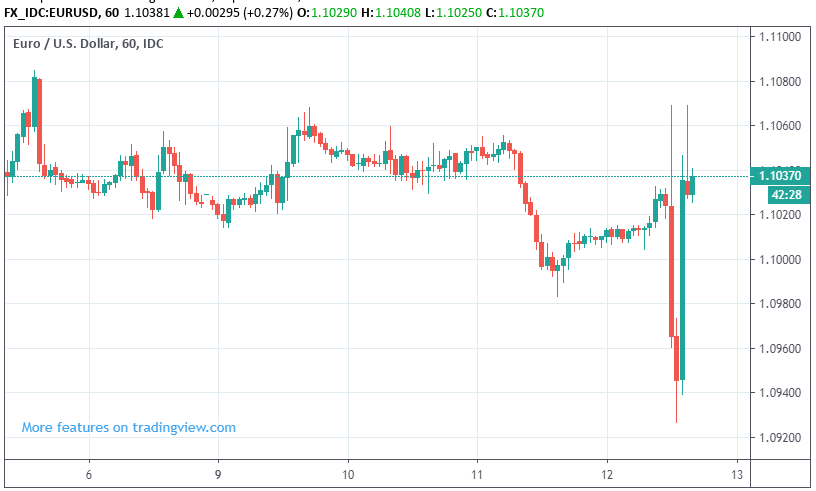 "Through the measures announced today and Draghi’s presser after, it’s clear that monetary policy is tapped out. As we’ve argued before, this is aimed at expanding credit supply, but the problem in the Eurozone is credit demand," says Bipan Rai, head of FX strategy at CIBC Capital Markets. "The best way to stimulate credit demand is via government spending. Note that EZ governments have been consolidating their budget deficits for years and the calls for expansionary policy here are growing louder."

Markets were said to be looking for a €30 bn per month bond program so the smaller value of the purchases should have boosted the Euro, although the task of gauging ever-fluctuating expectations was complicated this month by influential voices at the ECB who'd publicly advocated against such a move.

Some might have come to expect less of the bank by the time the decision was announced, which might explain why the Euro sold off after the announcement. However, earlier losses could simply have been due to investor fears that Draghi may have kept an ace card up his sleave for use in the press conference, with the subsequent recovery coming when that card didn't materialise. That said, the U.S. Dollar was also volatile on Thursday.

"Draghi tied himself in knots on fiscal policy," says Claus Vistesen, chief Eurozone economist at Pantheon Macroeconomics. "The key story is that we are much more likely to see looser fiscal policy, at the same time as still-loose monetary policy, in the next 12 months, which, in the end, points to upside risks to growth and asset prices. Germany naturally is being singled out, and we think Berlin will respond in due course, probably with additional stimulus." 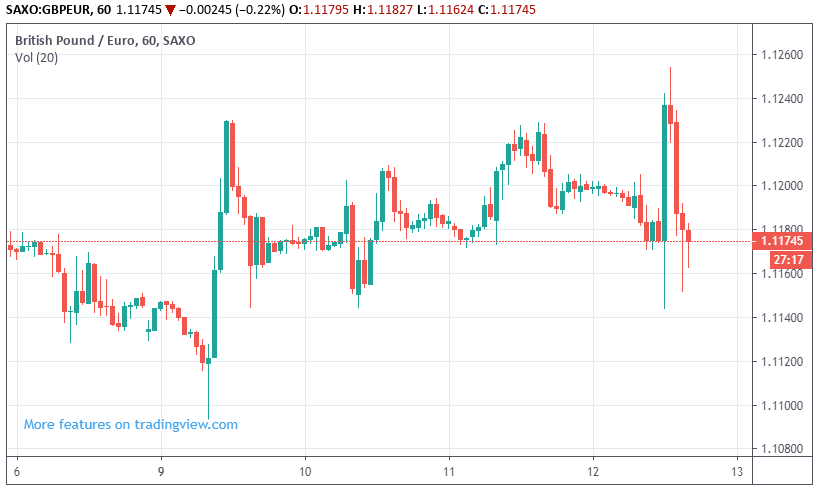 "The details suggest that the central bank is going all in," Pantheon's Vistesen says. "We been saying this to clients for ages—that the ECB will struggle to get to 2%, even in the best of times. In short; the ECB is now going all in on achieving what we think is a structurally unattainable inflation target. That is a recipe for more or less permanently negative rates, and potentially even QE in the Eurozone, at least within any reasonable forecast horizon. We can’t wait for Mr. Trump’s reaction to that!"

Changes in interest rates are normally only made in response to movements in inflation, which is sensitive to growth, but impact currencies because of the push and pull influence they have over capital flows. Falling rates tend to drive investment flows away from a currency and depress exchange rates.

European Central Bank, acting quickly, Cuts Rates 10 Basis Points. They are trying, and succeeding, in depreciating the Euro against the VERY strong Dollar, hurting U.S. exports.... And the Fed sits, and sits, and sits. They get paid to borrow money, while we are paying interest!

The ECB has cut interest rates and bought large volumes of bonds for years in the hope of lifting inflation back to the target of "close to, but below 2%" by stimulating the economy with lower borrowing costs. However, and so far in the process, the bank has got little to show for its efforts. Headline inflation fell 10 basis points to 1% in July and core inflation, which is the preferred measure price pressures among central bankers, dropped from 1.1% to 0.9%.

"When central banks acknowledge that further cuts aren't helping lenders, borrowers or depositors, and when JGB and Bund yields, not to mention Trump-tweets, have dragged US rates (and yields) down to zero too, Europe's leaders will be forced to rethink their fiscal policies and learn to live with a stronger euro. For now, Mario Draghi looks like an ageing boxer, fighting to the end," says Societe Generale's Juckes.

Expectations of ECB intervention had built steadily over recent months amid a slowdown in the global economy brought on by the U.S.-China trade war, which has hurt the export-dependent Eurozone and particularly Germany. This is why a Bloomberg News report claiming the U.S. is eyeing a deal that temporarily ends the trade war with China could also explain the bounce in the Euro after the ECB's decision as well as at least some of the volatility in the Dollar.

"There is still scope for the euro to fall, particularly if US/Chinese trade talks reach yet another impasse, higher tariffs are introduced and the USD/CNY rises as we expect (to 7.5) or higher. But the inability of Mr Draghi to drive the euro lower with his latest ‘QEternity' announcement is further evidence that euro weakness from here would have less to do with the ECB, than what happens elsewhere," Juckes adds, in a note to clients. 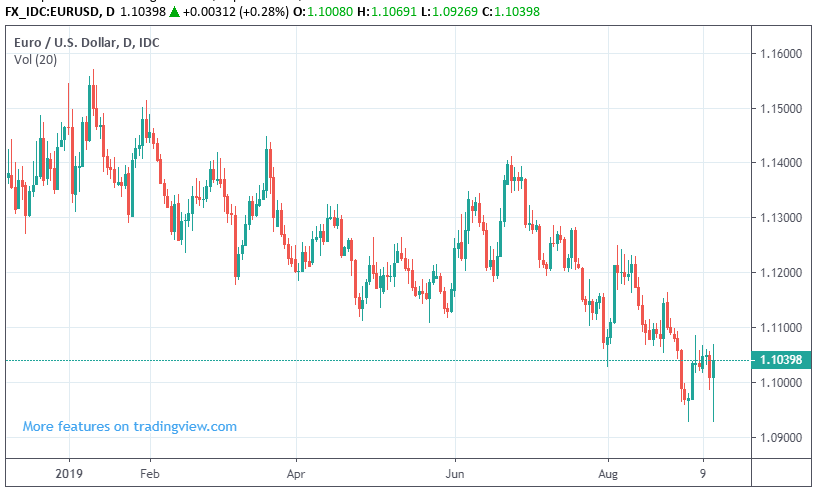 "While the ECB’s earlier QE programme did appear to boost growth, that was largely due to stronger exports thanks to the weaker euro. Domestic demand was never particularly strong. Given the current economic and political environment globally, such a surge in exports is unlikely to be repeated. Moreover, the jury is still out on whether low/negative interest rates are actually encouraging consumers and businesses to spend more," says Andrew Grantham, an economist at CIBC Capital Markets.

Expectations of ECB action have mounted this year as official data painted a picture of a deterioating growth outlook that's simply getting "worse and worse", in the words of outgoing chief Mario Draghi, who's set to be replaced by former International Monetary Fund boss Christine Lagarde when his term ends next month. Growth has slowed notably in the Eurozone as it contends with a litany of headwinds that look set to go on buffeting it for a while yet.

Eurozone GDP growth is forecast by the European Commission to come in at just 1.2% for 2019. This is below what the ECB's calls 'potential growth' and estimates to be around 1.25%, which means the economy is not currently growing fast enough to generate any inflation pressures at all. This is why markets are calling ECB action as a matter of urgency on Thursday.

"A series of external shocks, notably the US-Chinese trade war and the Brexit mess, have derailed the Eurozone recovery. Amid such pervasive uncertainty, even lower financing costs for households and companies will not raise consumption and/or business investment significantly," says Holger Schmieding, chief economist at Berenberg. The ECB is containing the downside risks. The very accommodative stance of monetary policy makes it unlikely that the economic downturn could spark significant financial turbulence."