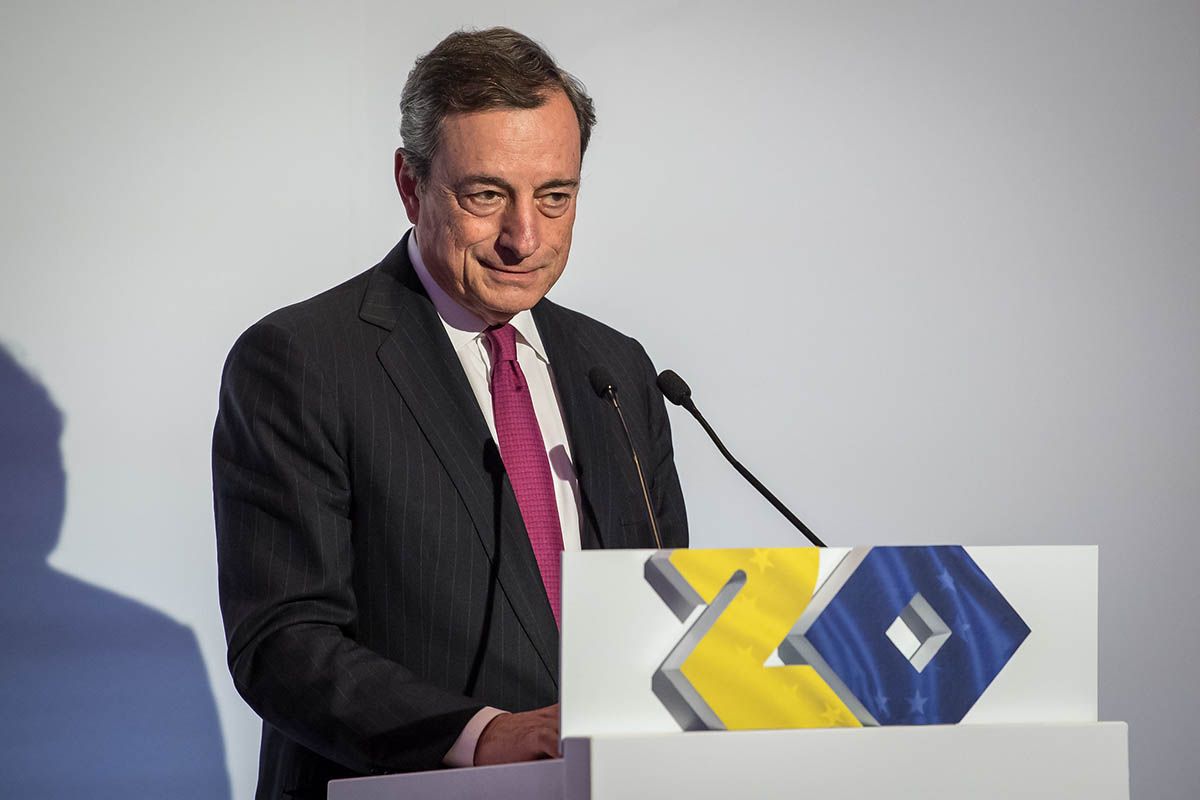 - Economists look for September cut but ECB may need to go further.

- GBP/EUR up off six-month low as EUR falls across the board Tuesday.

- EUR outlook clouded given ECB and Fed are seen cutting at same time.

- Trump hits out at Draghi over Euro's fall, may push Fed for rate cuts.

The Euro slumped across the board Tuesday after the European Central Bank's (ECB) Mario Draghi hinted that fresh interest rate cuts and another bond buying programme are now on the table for discussion in the bank's monetary policy meetings, which has helped lift the Pound-to-Euro rate off a six-month low.

ECB President Marion Draghi said in a landmark address from the Portuguese city of Sintra that if inflation does not show signs of picking up sustainably toward the bank's target of "close to but below 2%" then additional stimulus for the Eurozone economy could be required.

"Further cuts in policy interest rates and mitigating measures to contain any side effects remain part of our tools. And the [asset purchase programme] still has considerable headroom," Draghi told his audience of central bankers. "All these options were raised and discussed at our last meeting."

The ECB left its refinancing rate, marginal lending rate and deposit rate unchanged at 0%, 0.25% and -0.4% respectively this month and did not give any firm hint of an interest rate cut being on the horizon. On the contrary, the bank was perceived as much more upbeat on the economic outlook than markets had thought was likely.

However, markets were betting at the time that an interest rate cut would come within 12 months and when Draghi neglected to validate that idea, the Euro rose. Only the single currency's gains were unwound on Tuesday. 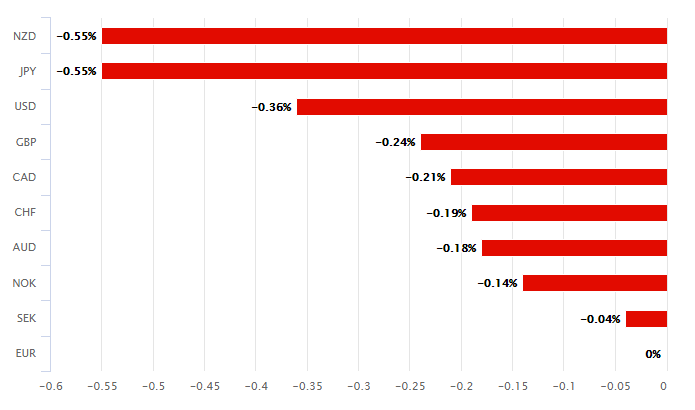 "The risk of a deposit rate cut has increased with Mr. Draghi’s dovish overtures today, and this is now our base case for the September meeting. We think core inflation will pick up a bit between now and then, but we fear the Q2 GDP data will be poor, and this will be the main background for the ECB’s decision," says Claus Vistesen, chief Eurozone economist at Pantheon Macroeconomics.

Changes in interest rates are only normally made in response to movements in inflation, which is sensitive to growth, but impact currencies because of the influence they have on capital flows and their allure for short-term speculators.

Market expectations of Eurozone inflation in five years time have fallen significantly during recent weeks and now show the consumer price index remaining below the ECB's 2% target a long way into the future, which could raise pressure on the bank to act.

Meanwhile, the Bank of England (BoE) continues to insist that its own interest rate will need to rise over the coming quarters, which could provide support to the Pound-to-Euro rate up ahead.

"The UK's economy is holding up relatively well given the ongoing Brexit uncertainty. Growth has been at 1.8% y/y in 1Q and inflation is just above target with 2.1% y/ y. This compares well to the Eurozone's 1.2% for each. Furthermore, the European Central Bank has turned somewhat dovish lately, whereas the Bank of England seems to be on hold for now," says Daniel Trum, a strategist in the chief investment office of UBS, in a recent note to clients. 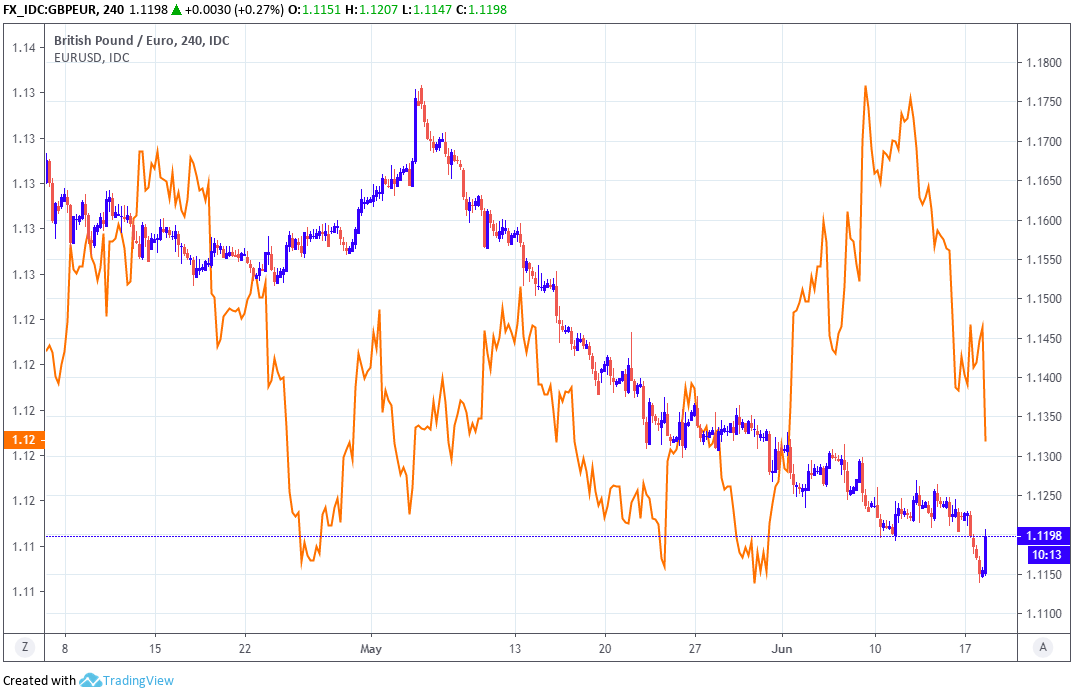 "We think that the earliest possible date for another round of easing could be September when the next projections are out. However, the recent dramatic decline in inflation expectation could increase the discussion around further easing measures already at July meeting." says Jan von Gerich, an economist at Nordea Markets.

The Sintra Forum on Central Banking was the site of Draghi's June 2017 hint that the ECB would soon begin winding down its quantitative easing (QE) programme. That 2017 address took the market by surprise and ignited a significant rally that dragged the single currency almost 10% higher against the Dollar by the time the curtain closed on 2017.

QE saw the ECB buy European bonds en masse to incentivise borrowing by forcing down bond yields, which are market interest rates, between January 2015 and December 2018. The idea was that this would lift inflation toward the target of "close to but below 2%" by stimulating faster economic growth, but it's debatable whether the policy ever worked at all.

Core inflation, which ignores movements in volatile energy items because of their distorting impact on organic price pressures, was just 0.8% in June 2019 and only 20 basis points above the 0.6% rate that prevailed in January 2015. This and the fact that markets currently anticipate little inflation at all over the next five years is why the European Central Bank might soon get the proverbial QE punch bowl out again.

"Mr. Draghi also teases markets with the idea that because inflation has been below target for a long time, it may need to be above target for an extended period to reach “equilibrium” in the medium. We wish the ECB the best of luck in that endeavour," says Pantheon's Vistesen. 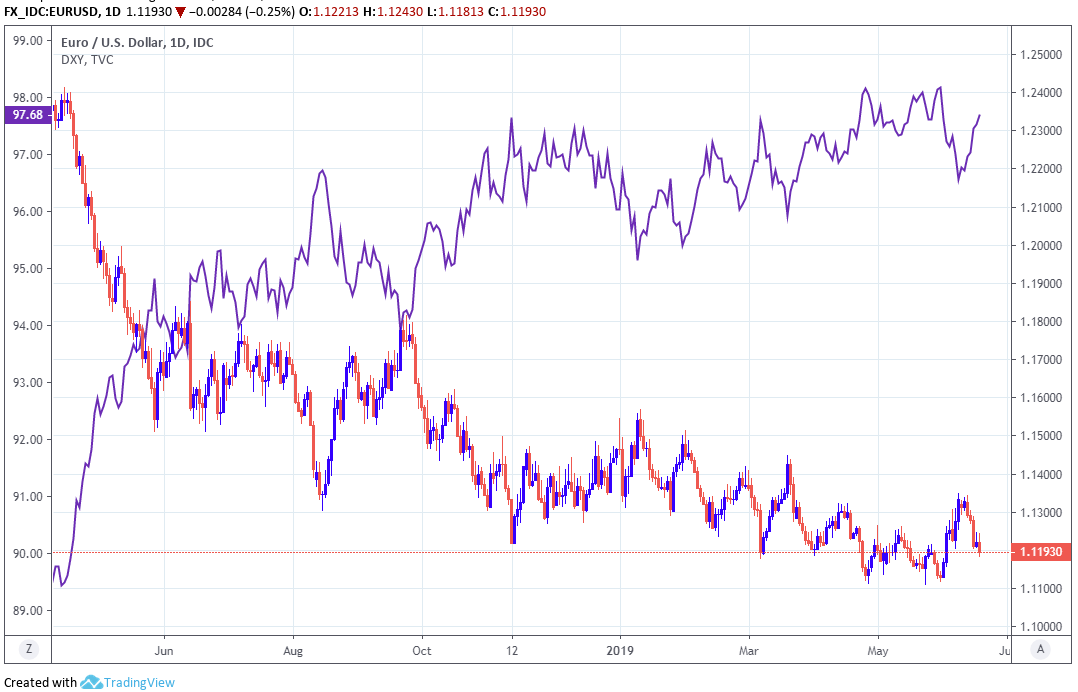 The Bank of England's interest rate policy could mean the Pound-to-Euro rate rises from recent lows over the coming quarters, but the outlook for the Euro-to-Dollar rate is much less certain, not least of all because of Federal Reserve (Fed) interest rate policy and the Eurozone inflation connundrum.

The Federal Reserve is now widely expected to begin cutting its own interest rate from its current 2.5% level before the year is out. The Fed has much greater scope to cut rates than the ECB, which could risk driving a tide of international capital flows toward the Eurozone and lift the Euro-to-Dollar rate in the process.

Mario Draghi just announced more stimulus could come, which immediately dropped the Euro against the Dollar, making it unfairly easier for them to compete against the USA. They have been getting away with this for years, along with China and others.

"Any economy that is suffering from a prolonged bout of undesirably low inflation is likely to favour a weak currency. If several economies find themselves in the same boat coincidentally, the prerequisite conditions for a currency war are set," warns Jane Foley, a strategist at Rabobank.

As result, if the Federal Reserve does in fact go ahead and cut its interest rate later this year then the ECB could feel compelled to take as strong action as it can so as to avoid an unhelpful increase in Euro exchange rates.

Mario Draghi just announced more stimulus could come, which immediately dropped the Euro against the Dollar, making it unfairly easier for them to compete against the USA. They have been getting away with this for years, along with China and others.

"The fact that the Fed has more scope to cut interest rates than any other G10 central banks may at first sight appear to give it more power to weaken the USD, but this is a short sighted assumption," Foley explains.

Foley and the Rabobank team say "safe-haven flows" resulting from U.S. tensions with China and Iran will support the Dollar even if the Fed begins cutting its interest rate in July, which is why they forecast the Euro-to-Dollar rate will fall to 1.10 before the end of September.

But even Rabobank suggests the Euro will turn higher after that, which might be a challenge for the ECB once into 2020. And all of this assumes the Fed does not succumb to increasing pressure from President Donald Trump to engineer a weaker Dollar by cutting interest rates steeply.

The Dollar index, which measures the value of the greenback against a range of currencies traded with it, can normally only fall if the Euro rises because Europe's single currency accounts for a large portion of turnover in the global market and nearly half the Dollar index is comprised of Euro-to-Dollar flows.