- Inflation data for Eurozone main event for the Euro

Pound Sterling starts the new week higher against the Euro and most other major currencies as it sets aside the selling pressure that characterised the end of the previous month and quarter.

At the time of writing on Tuesday, 1 Pound buys 1.1427 Euros on the inter-bank market with some fresh gains coming amidst a stronger-than-forecast set of manufacturing data which shows the sector continued to enjoy strong domestic and international demand at the end of the first quarter.

However, Sterling ultimately remains bouyed by the more benign Brexit environment now that a transitional Brexit deal has been reached.

"The British Pound was on the front foot, gaining against both the Dollar and the Euro, extending the significant gains it posted in the first quarter amid a reduction in Brexit uncertainties," says Christina Parthenidou, an Investment Analyst with XM, a foreign exchange and financial market trading provider headquartered in London.

Despite the supportive fundamental environment, our technical studies note the Pound-to-Euro exchange rate continues to trade within the tight sideways range it has inhabited for the past six-months.

Technical studies aim to predict future direction in a currency pair by analysiing the structure of the underlying market.

Last week saw the pair weaken from the range ceiling at 1.1525 back down to its current level at 1.1402, mainly on month and quarter end flows, though beyond that there appears to be no clear, specific, fundamental driver for the decline.

The pair broke below a key support level at 1.1430, which from a technical perspective is a bearish sign.

Looking at the four hour chart below - which we use to study near-term direction - the formation of a sequence of descending peaks and troughs suggest the exchange rate is in a short-term downtrend.

Our studies suggest this move lower could continue over coming days. 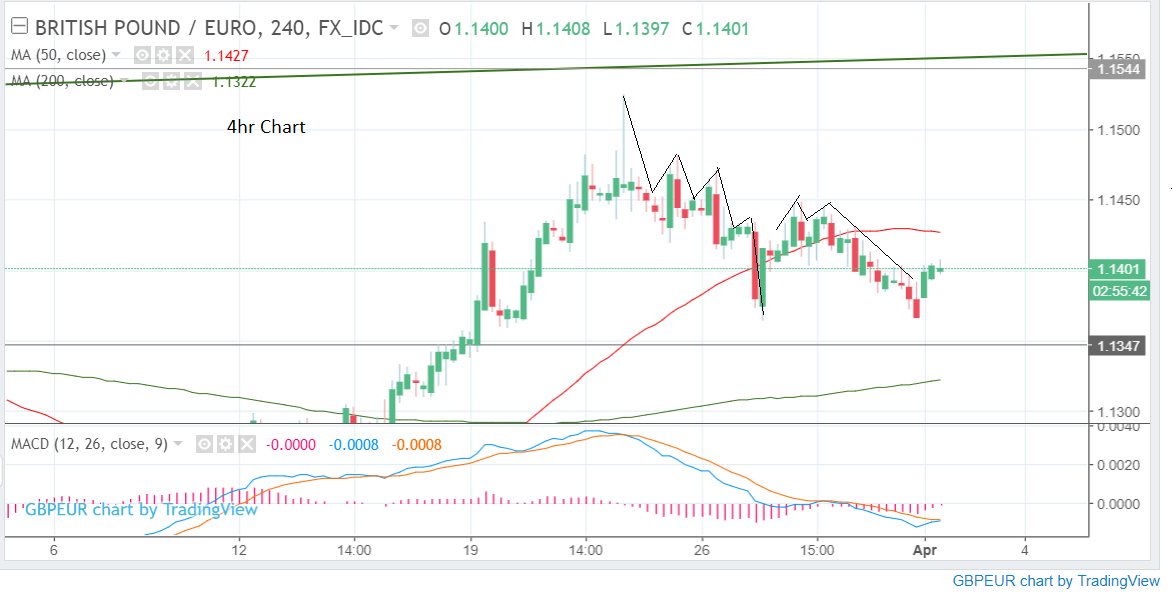 Longer-term, however, we are still bullish the pair and expect it to eventually break higher (see weekly chart below).

The fact the pair was in an uptrend prior to the formation of the range sugests more chance of an upside breakout ultimately developing.

The look and feel of the price action also recommends an upside break rather than a downside break; we would argue a break lower simply wouldn't look 'right' given the prior market's form.

Thus we are bearish in the short-term but bullish in the medium term.

In the short-term there is a zone of support in the mid-1.13s which includes the monthly pivot (PP) at 1.1347 and the 50-day MA at 1.1334, and which is likely to present an obstacle to further downside (see daily chart above).

Only a clear break below this zone (the green area with hatching on the daily chart) would provide confirmation of further downside, such as would be provided y a break below 1.1300. Such a move would provide confirmation of an extension of the bearish short-term trend, with the next target situated at 1.1245 where the 200-day MA is located and is expected to provide a robust floor and possibly even reinvigorate buying interest.

In the medium-term, however, we would expect a move back up to the range highs and then a break higher, confirmed by a move above 1.1600 to a target at 1.1720 where the R2 monthly pivot is situated and likely to provide resistance to further upside.

Pivots are price levels used by professional traders to gauge the trend and as entry points for buy and sell orders; they therefore are likely to have an influence on future market direction.

When a falling currency touches a pivot it can often bounce back up or reverse trend altogether.

The main releases in the week ahead for Pound Sterling are the PMI (Purchasing Manager Index) business surveys, which provide a timely and reliable gauge of levels of activity and growth in various different industry sectors.

Manufacturing PMI is out at 9.30 on Tuesday April 3, and as mentioned the numbers comfortably beat expectations with a reading of 55.1 where economists had forecast a slide to 54.8.

With the services sector accounting for more than 80% of the UK economy, it is Thursday's number that is likely to have the largest impact on Sterling.

"We suspect that the wintery weather during the month may have had an impact and are forecasting a two-point fall in the services PMI to 52.5 and a more modest half a point drop in the manufacturing PMI to 54.7," says Ryan Djajasaputra an analyst at Investec.

To round off the week there is speech from Bank of England (BOE) governor Mark Carney at 16.15, which is significant as it may hint at whether the BOE still intends to raise interest rates in May as the market currently expects.

An interest rate hike would lift the Pound by supporting inflows of capital from investors seeking somewhere profitable to park their money.

Eurozone inflation data is the main release for the Euro in the week ahead, when it is released at 10am on Wednesday, April 4.

CPI is forecast to show a faster 1.4% rise in March compared to a year ago (YoY) when it increased by only 1.1%.

Higher inflation is a key requirement for the European Central Bank (ECB) to end its stimulus programme and start raising interest rates. The ECB's inflation target is just below 2.0%.

Nordea bank's chief FX strategist Martin Englund, who adds, "What might not be properly accounted for," however, "are the effects from the past year’s gains of the trade-weighted EUR, which if anything suggests downside risks to Euro-area inflation also in coming months (vs e.g. ECB’s forecasts)." 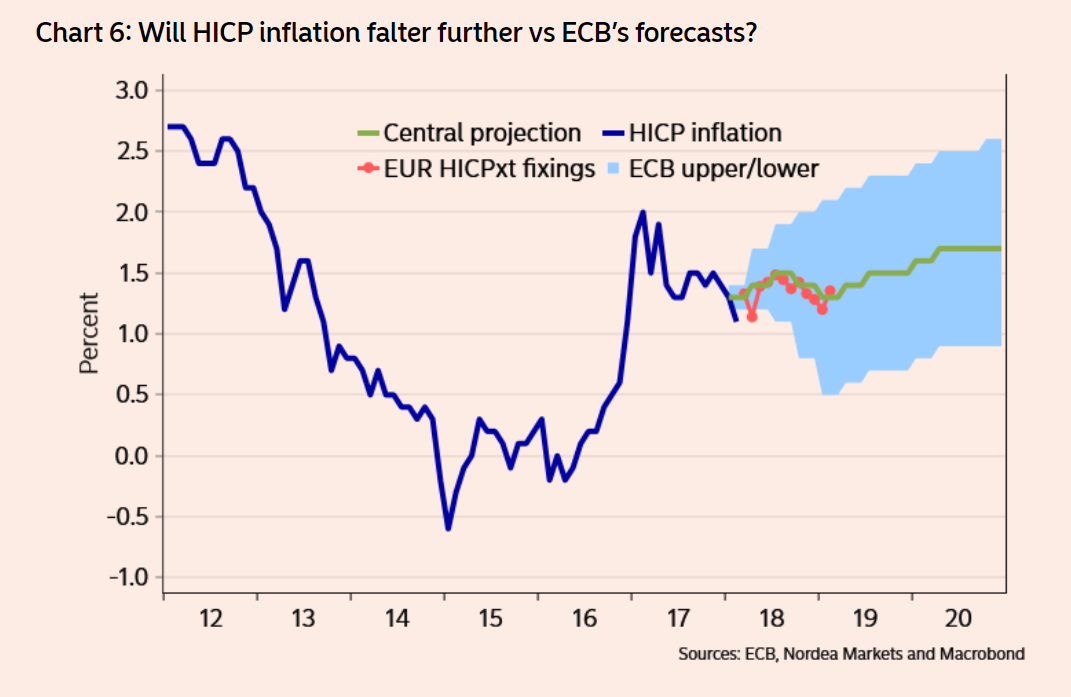 The Euro-zone unemployment rate is out at the same time as the CPI and is forecast to slide to 8.5% from 8.6% previously.