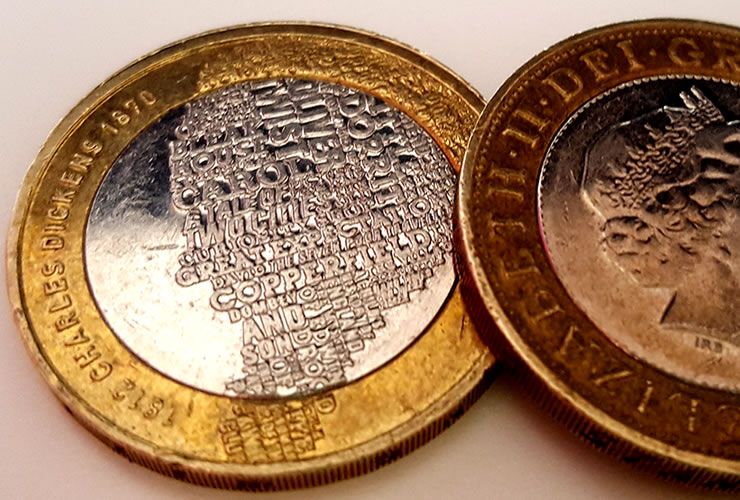 The British Pound was one of the best-performing currencies in the G10 foreign exchange complex in mid-week trade on news reports that suggest a second Scottish referendum on independence from the United Kingdom might not be the horizon-risk it was previously thought to be.

“Nicola Sturgeon’s referendum plans were rapidly unravelling tonight as it emerged she is to abandon the SNP’s policy of rejoining the EU immediately amid record Euroscepticism in Scotland,” surmised the Financial Times.

Fresh polling data suggests Scots aren't too hot on sacrificing their Union with England, Wales and Northern Ireland only to join up with the European Union with a poll showing a record level of Euroscepticisim in Scotland.

It was on Monday that Sturgeon made an announcement that she would be seeking a second referendum in late 2018 based on the premise that Scotland's call to remain in the EU in the Brexit referendum had not been heard.

Furthermore, recent polls have shown the SNP would lose a second referendum with a YouGov poll on the matter showing 43% would vote for independence while 57% would vote to remain part of the UK.

This is the highest 'No' lead since August 2014 when the referendum campaign was in full swing.

And, if Nicola Sturgeon did call another referendum 46% of Scots think the ballot should be allowed to go ahead, compared to 42% who think it should be blocked.

Analyst Boris Schlossberg at BK Asset Management notes Sterling "verticalized nearly 100 points in a matter of minutes" on the news that Scottish First Minister Nicola Sturgeon would have a difficult time calling another independence referendum.

We know that the SNP tends to follow such polling in their thinking when it comes to looking into the possibility of holding another referendum.

"The commitment to the EU of many of those who voted to Remain does not appear to be strong enough that they are likely to be persuaded by the outcome of the EU referendum to change their preference for staying in the UK," says John Curtice, senior research fellow at research firm ScotCen. "Meanwhile, there is a risk that linking independence closely to the idea of staying in the EU could alienate some of those who currently back leaving the UK."

The conplexities of exiting the UK to enter the EU may also be weighing on the mind of voters.

Spain would certainly want to see Scotland go to the ‘back of the queue’ if it wanted to rejoin the EU after cessation, as it does not want to encourage similar attempts from its regions, especially the Catalans.

If the SNP do back-track on their call for a referendum markets will certainly welcome the vanquishing of uncertainty and Sterling could find better support.

Strength Forecast to be Temporary

The GBP to EUR exchange rate bounced to 1.1480 in mid-week trade having gone as low as 1.1381 over previous sessions.

However, the Pound's move higher against the Euro has traced out an a-b-c pattern on the four-hour chart which is a purely corrective form and indicates the dominant down-trend will resume. 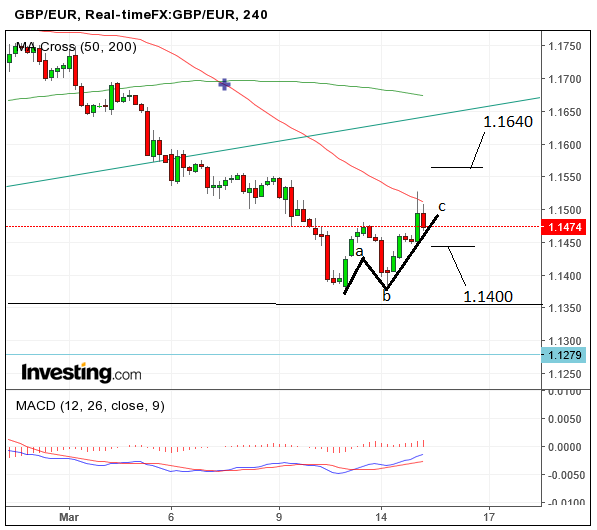 The notion that Sterling's recent strength is corrective in nature chimes with view put forward by analyst David Sneddon at Credit Suisse.

The technical analyst has told clients that he sees the Pound ultimately resuming its move lower over coming days. 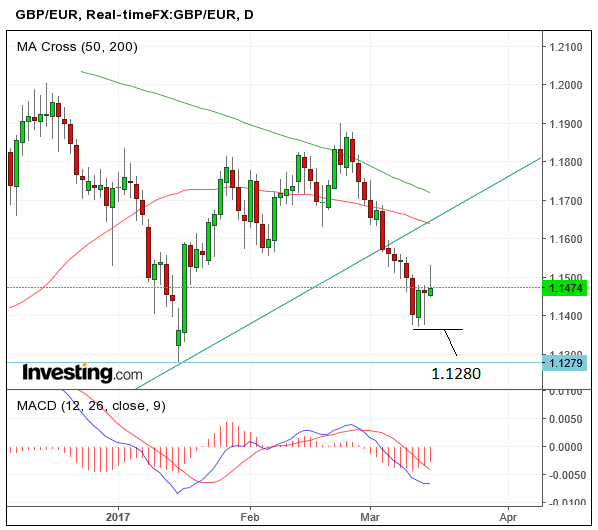 We only see the dominant short-term downtrend reversing on a break above the a-b-c pattern highs, which would be confirmed by a move above 1.1560 and see the exchange rate rise to the next target at 1.1640.