The Pound might be in a lose-lose situation with investors who see prospective Bank of England rate hikes as both supportive and a headwind, but Credit Suisse stick with a bullish forecast.

Despite the Pound-Euro exchange rate sitting near its 2021 highs foreign exchange analysts reckon it should be higher given the recent rally in UK bond yields.

UK bond yields have risen faster than Eurozone equivalents which would imply the Pound should be higher relative to the Euro.

Popular explanations for an apparent underperformance in GBP/EUR is that Brexit risks associated with Northern Ireland have made a return and that the Bank of England is about to raise interest rates.

The latter explanation is a curious one as typically expectations for higher interest rates result in a stronger Pound, it is therefore at odds with the currency's subdued nature of late.

Money markets suggested as of Wednesday afternoon there were was a hefty 100 basis points of hikes lined up for the UK between now and the end of 2022.

Such a hike in the cost of borrowing when the growth outlook is subdued could in fact hamper future growth, hence the Bank of England could stand guilty of committing a policy mistake. 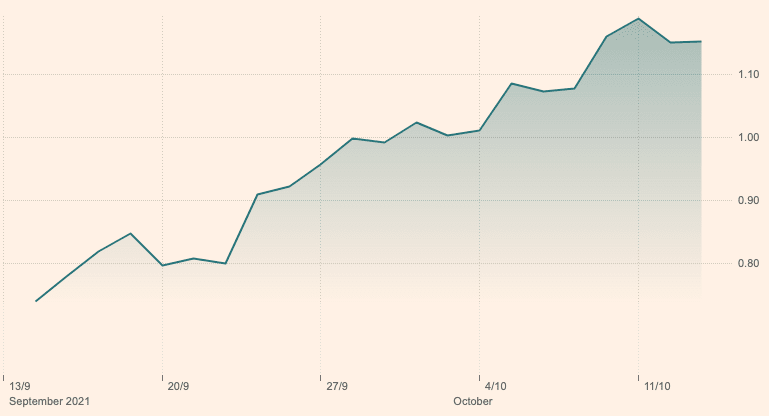 Above: UK ten-year government bond yields have been rising in anticipation of higher rates at the Bank of England. Image courtesy of the FT.

She says household finances are already battling against increasing energy bills, a £20 a week cut to the benefits, a hike in National Insurance contributions from next April an end to the security provided by the furlough scheme which has just drawn to a close.

This leaves the Pound as something of a damned currency: if the Bank cools expectations for rate hikes (on the view it could committ a policy mistake) the Pound could be sold as investors price out recent expectations.

Shahab Jalinoos, Head of FX Strategy at Credit Suisse says there now exists "a popular notion in the market that GBP has to fall whatever happens".

"Either because the BoE ends up more dovish than the market is pricing in or because the BoE delivers early rate hikes to subdue inflation and ends up making a “policy mistake” by hiking into a weakening growth outlook," says Jalinoos.

Jalinoos recently wrote about how the Pound's potential has been challenged by 'perma-bears' in the analyst and investor communities who are inclined to exaggerate problems faced by the UK economy.

For their part Credit Suisse are inclined to maintain "a more middle-of-the-road idea that the market will not know one way or another how growth will pan out for some time to come".

They do however expect Bank of England policy intentions - the desire to ultimately raise rates in the face of rising inflation - to carry the day for Sterling.

"We suspect this reality is ultimately what wins the day for GBP vs EUR, albeit with only modest further gains now likely from current levels," says Jalinoos.

It is also worth noting at this point that the market's expectation for a first hike at the European Central Bank (ECB) has come forward dramatically over recent days in response to surging inflation expectations in the Eurozone, a development that dents the Pound's upside potential against the single currency.

The development is useful in understanding why the GBP/EUR exchange rate appears to have been unsuccessful in moving above the key 1.18 area over recent days and might struggle to do so in the near-future.

Money markets have moved to fully price a 10 basis-point rate hike from the ECB by the end of next year, as policy-tightening expectations continue to rise in the face of rising inflation.

During mid-2021 expectations for that first rise were set at 2024, suggesting a substantial move for Euro rate expectations.

Eonia money market futures dated to the ECB's December 2022 meeting now see a 100% chance of such a move, compared with a roughly 60% chance on Friday.

The chance of a September 2022 rate hike stood at more than 80% versus roughly 50% at the end of last week.